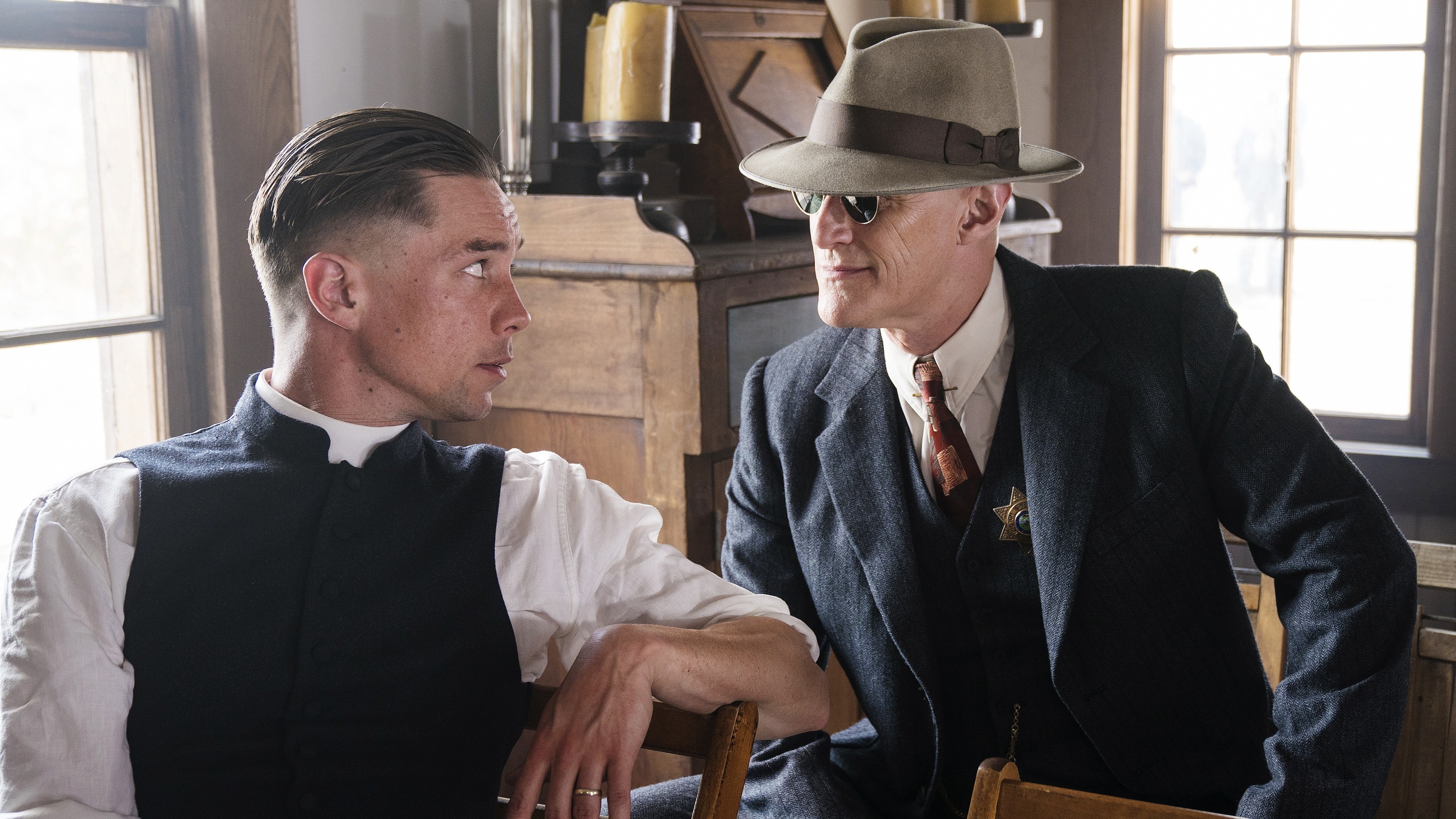 At first, the differences between Creely and Seth seem vast, almost to the point of being hard to understand exactly how these two men could be brothers.  The more we learn about them, and their shared past, the clearer it becomes that these two are more alike than they first appear.  Both men have no qualms about killing, and both see it as a necessary part of the jobs they’re trying to do.  Creely wasn’t always like this, and we’re given a glimpse of him before he becomes the cold blooded killer he is now.  A domineering father altered both of these men’s lives for the worse, making the viewer wonder what exactly their lives could have been like if it were not for his authoritative and violent tendencies. 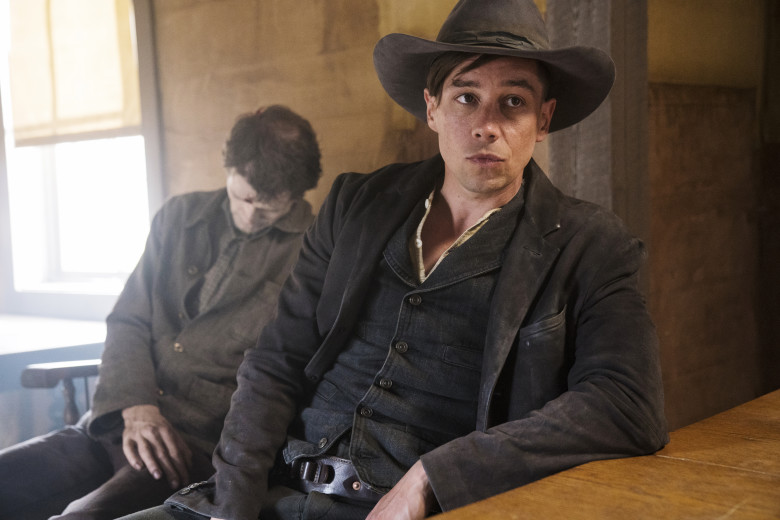 In their formative years in Wyoming, their father used Creely and Seth as muscle, working for big oil companies to force farmers off of their land by whatever means necessary, including murder.  This dirty work they did for big corporations explains why Seth is so secretive about his past with Amelia.  He doesn’t want to talk about the terrible things he’s done, because he knows his previous work would disgust her.  It goes against everything the two of them are fighting for now, so realizing Seth was once in Creely’s shoes may drive a wedge between Seth and Amelia.  I’d like to think she’s smarter and stronger than that, and would recognize Seth is trying to right the wrong’s committed in a previous life, but Seth doesn’t give her credit for understanding his change and instead attempts to hide the past from her.  Everything Seth is now is in direct opposition to what his father trained him to be.

Creely was never cut out to do the kind of work their father pushed them into.  He was sensitive and thought about the farmer’s and their families.  It was left to Seth and Lew to cover up Creely’s inability to be the kind of ruthless man their father wanted him to be, and Seth would take beatings when his father figured out the truth.  Everything changed for Creely the night his father forced him to kill a farmer who refused to leave his land.  Taking this farmer’s life altered the course of Creely’s future, and to deal with the anxiety and the guilt of his actions he began cutting notches into his own side for every person he killed.  The pain is a form of penance for his sins, and a reminder of the pain he himself causes others.  Instead of cutting a notch in his gun to represent the people he killed, his own flesh is a record of his misdeeds.

The more we learn about Creely, the harder it is to see him as a straight up antagonist.  This isn’t the life he wanted to lead, but he’s trapped into it, and it’s partially Seth’s fault.  At some point in their lives Seth pinned murders he committed on Creely, and Creely went to jail in Wyoming for it, while Seth walked away free.  Creely was left to pay for Seth’s sins.  Martin Eggers Hyde finagled a way to get Creely out of jail, and has been using his skills as a strikebreaker ever since.  He has Creely trapped into this life, and holds his ability to put Creely right back in jail over his head.  This is why he’s so angry with Seth, and wants Seth to clear his name and take responsibility for his actions.  As long as Creely is stuck as an indentured servant of the anti-labor forces Martin Eggers Hyde represents, he’s unable to be himself.  He never wanted to be a killer, he always wanted to be a teacher even though he can’t read.  Creely’s feelings for Bessie only get in the way and cloud his judgment, which could cause his death.  It’s why he doesn’t fully let her in, even though there’s clearly a very strong attraction and affection between the two. 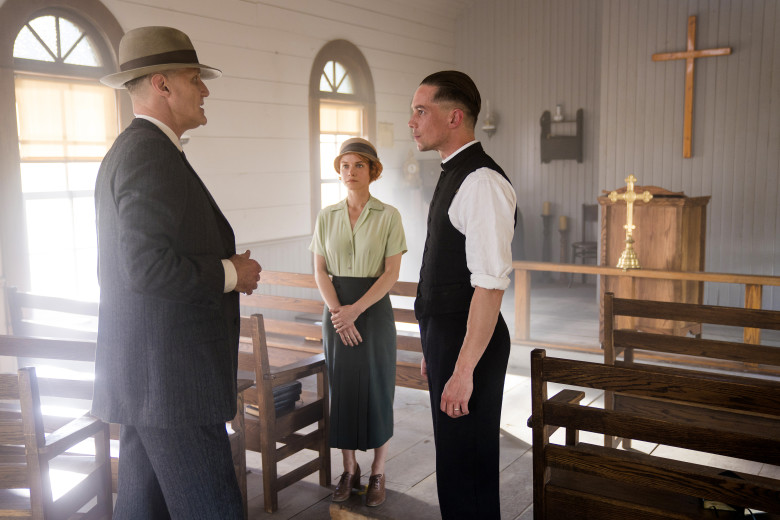 The women of Damnation are really the stars of the entire series.  Both Amelia and Bessie are some of the strongest written female characters I’ve see on television in a very long time, and both are instrumental to their men’s success.  Amelia is the brains in her relationship with Seth, and has the ability to grasp a situation and see the big picture solution to their problems.  Every time they’ve come into trouble, it’s been her ideas and plans that have saved things.  The penny auction was her idea, and it sounds like the farmer strike was as well.  When Creely exposes Seth’s murder of the three men from Chicago by posing one of the dead men on a Ferris wheel, it’s Amelia’s quick thinking that saves the day.  The sheriff is in political trouble with another candidate gunning for his job, and she figures out a way to use his political circumstances, and her relationship to D.L. to help them both.  They stage a scene where it appears the sheriff happened upon the assassin Seth killed struggling with Amelia, he shoots the man saving the preacher’s wife, and just happens to find identification of the three dead people from Chicago on the man.  She spins the entire situation to take the heat off of her and Seth, and make the sheriff look like a hero who stopped a spree killer.  D.L. even writes the story of these heroics for the local newspaper.  The situation was mutually beneficial, and now she’s turned a possible adversary into an unlikely ally, which may be useful again in the future.

Bessie loves and understands Creely in ways no one else may ever have since his mother died.  Her and Creely’s mother’s professions align, which may make him feel safe and secure and also explain why he stays in brothels.  She’s used her secret relationship to her father to save his ass once, and tells him the sheriff is her father so he can use it as leverage when he’s arrested for the stunt with the body on the Ferris wheel.  Creely doesn’t end up needing to use this information, but it shows the trust he and Bessie have for each other.  They both yearn to escape their circumstances and be different people, and Bessie can see a future for her and Creely if they can only break free from the shackles that hold them back.  Bessie is a lot like Amelia.  She’s smart, see’s the big picture, and is able to use her knowledge to manipulate things to her advantage.  If these women were to get to know each other, they would probably make great friends and be unstoppable if they bent their wills in the same direction. 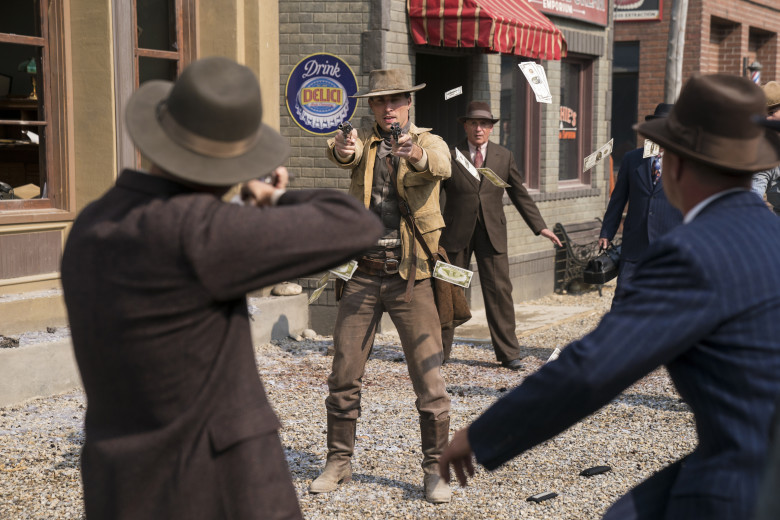 With Calvin Rumple fleeing town, and the bank foreclosing on all of the farms at once, Amelia senses an opportunity.  She knows Lew and Seth robbed banks in the past, and with the town’s guard down, and the distraction at her house with the sheriff appearing as a hero, she see’s a window of opportunity for the boys to rob the bank.  The idea is to use all of the money from the bank robbery to buy back and save the farms, but Seth and Lew find out something interesting while robbing the bank.  All of the land around Holden is being bought up by industrial conglomerates with plans to take over the town and change it drastically.  In order to stop these plans, they first need to understand why Holden?  What’s so special about this town in particular?  Until they figure that out, they will be unable to figure out how to stop the men behind this scheme.