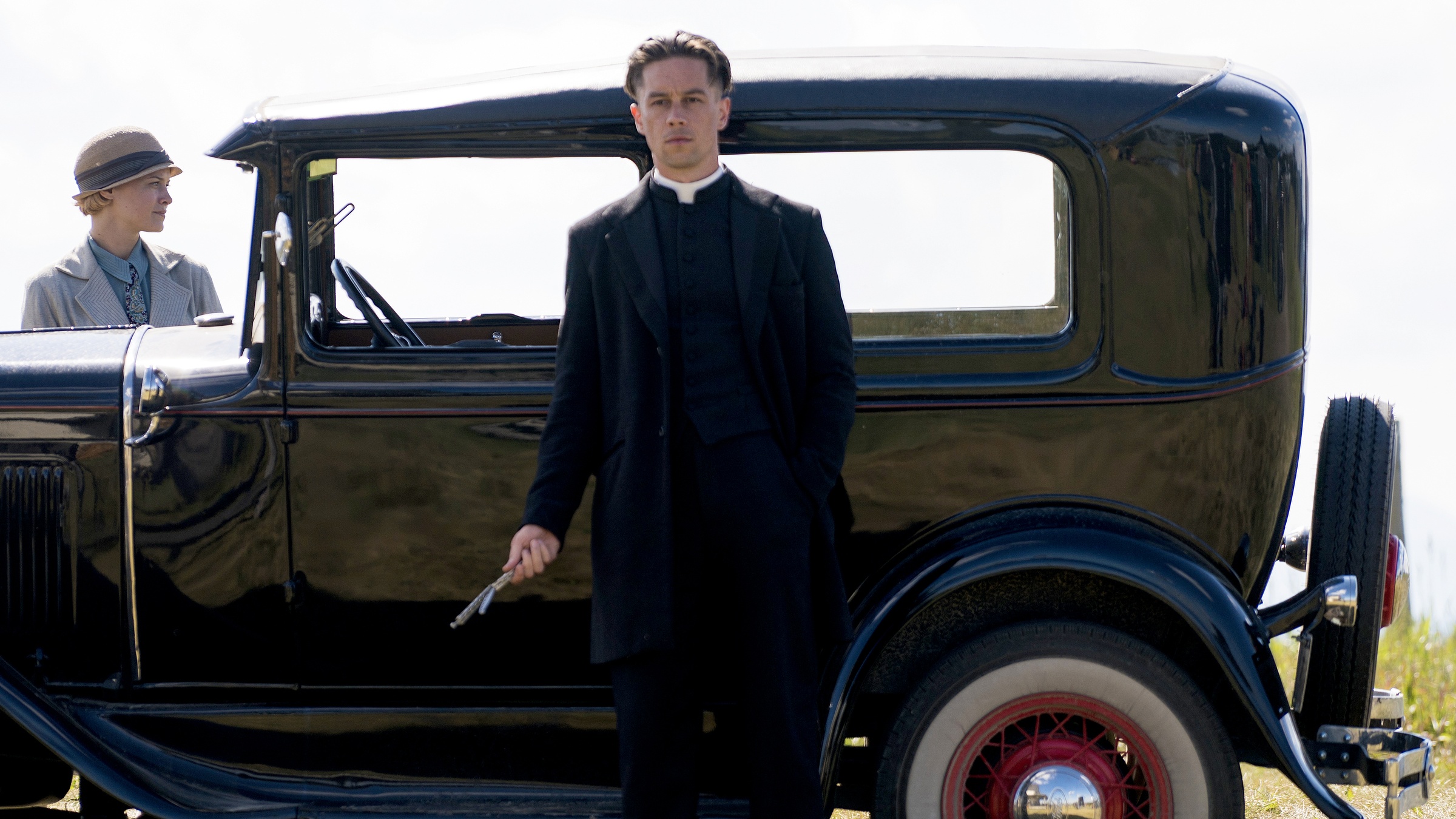 Creely has rubbed a lot of people the wrong way since he first came to town, and hasn’t made any friends on either side of the conflict that’s brewing.  The Sheriff doesn’t like him, and believes Creely has only come to Holden to cause trouble.  Killing Sam Riley set the tone for his adventures in town.  It’s clear he’s anti-union with ever fiber of his being, but the problem is he doesn’t make a good impression on the other factions in town who similarly oppose the farmer’s strike.  He annoys the bank owner by over bidding a proxy sent to make sure no locals win a bid for anything during the auction of Ms. Collinsworth’s farm.  The proxy even attempts to outbid miss Collinsworth for her family Bible, but Creely outbids him and gives the Bible back to Mrs. Collinsworth saying it’s a gift from the savings and loan that foreclosed on her house.  This angers both the bank owner and the proxy, but the fact Creely is seen out with Bessie is what really seals his fate this episode.  The locals don’t like miscegenation, and Creely’s blatant disregard for their small minded social mores paints a target on his back. 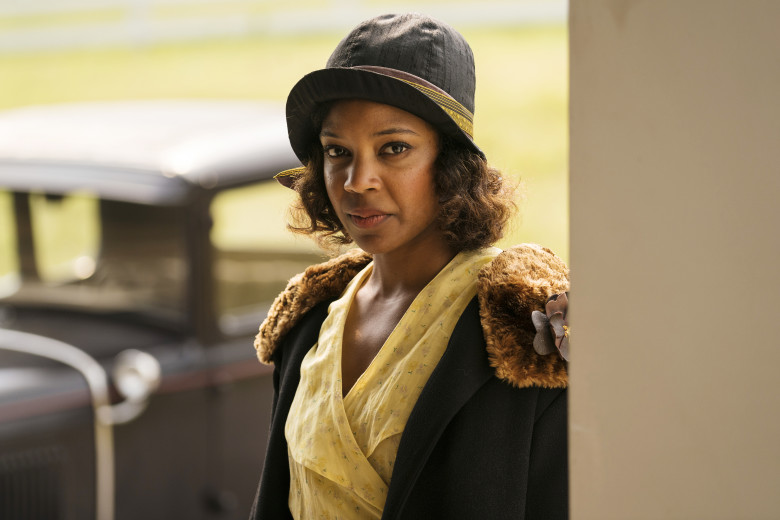 The bank uses price fixing and foreclosures as a tactic to remove the farmer’s from their land so some mysterious benefactor can come and buy up all of the land around Holden.  The reason for this is unclear, but the divisiveness of the two pronged attack on working families has set a social powder keg under the town pitting the farmer’s and their strike against the townsfolk, businesses, and bank.  Sheriff Berryman finds himself stuck in the middle of it all, unable and unwilling to choose sides lest his choice somehow either endanger his chances of being reelected Sheriff, or financially affect his illicit businesses.  For now he watches and waits, hoping to end up on the side of the victor.  Only things are bound to get far beyond his control if he continues being on the fence.

Seth and Amelia do everything they can to help the families being foreclosed on.  It’s clear they can’t gather enough money to save the farms, and even if they did the proxy would outbid them, just like he did with Mrs. Collinsworth’s Bible.  They’ve found themselves in an unfair fight, and they’re nearly helpless to do anything about it.  Both the sheriff’s men, and Black Legion men are at the auctions armed to the teeth in order to keep the farmer’s under control.  Whatever Seth and Amelia come up with needs to be subtle enough to go unnoticed.  If things were up to Seth blood would be shed, but Amelia comes up with a better plan, proving she’s the brains of the outfit. 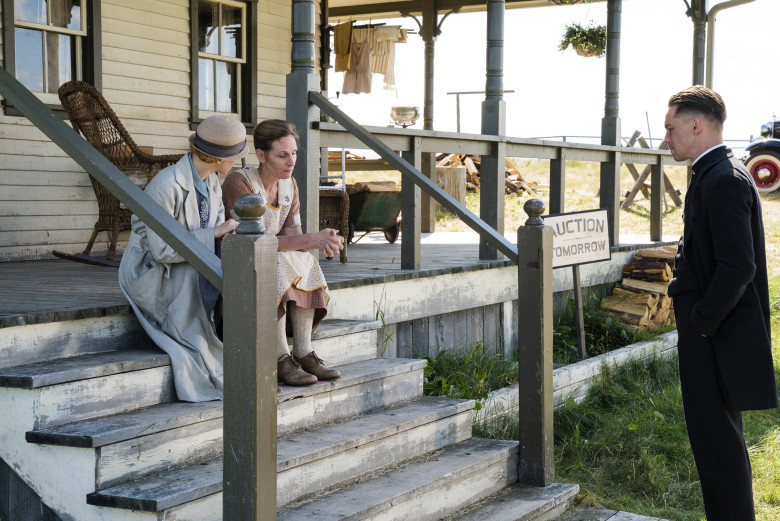 The only way to beat a fix, is to out-fix the fix.  Amelia has an epiphany and then Seth delivers her message to their followers.  She uses Seth as a means to deliver a message people might not hear the same way coming from a woman.  He’s her voice, and she uses him just like she uses the pen name of Dr. Samuel T. Hopkins to deliver her written words.  Amelia is a woman ahead of her time, and sadly her message and teachings would go unheeded if they were not given with the authority of a man’s voice at this time in history.  Instead of open insurrection, which would clearly lead to bloodshed and chaos, she comes up with an idea of hiding weapons in cigar boxes painted to look like Bibles.  All of the farmers show up, Bibles in hand at the auction of Mrs. Riley’s farm.  Just as the auction begins, they all pull their weapons from the Bibles to keep anyone else from outbidding Mrs. Riley’s opening bid of one penny for the entire farm.  Since no one will bid against her, she wins her farm back outright and the bank loses any payday for the land.  The bank owner, the sheriff’s men, and the proxy are impotent to stop the farmer’s from fixing the auction.  It’s a momentary win for Seth and his followers, but it’ll clearly bring more trouble to town when word gets out about what they’ve done.

The relationship between Bessie and Creely has transformed from a simple transactional one into something more.  There are genuine feelings for each other growing.  Creely needs her to read him letters and the paper, and he pays her well, but he also gives her something no one else does, he treats her like a human being.  Bessie’s own father doesn’t treat her with the respect he does, and Creely does it in public.  He demands others they cross paths with in town also treat her like the lady she is.  It’s this equal treatment and his unabashed comfort in her presence that rubs the local Black Legion group the wrong way.  It’s why they end up kidnapping Creely.  They string him up in a shed, with his tiptoes on a wobbly wooden box.  Any wrong step and he’ll slip and hang himself.  They want him to leave town and take Bessie with him.  Creely isn’t the type of person to back down, and in fact he taunts the men, but they mean to kill him, and would have if Bessie hadn’t intervened with her father, Sheriff Berryman.  Berryman takes the opportunity and the momentary power over Creely to pump him for information.  The Sheriff doesn’t get what he wants out of him.  Even though Berryman doesn’t care for him, he does care for his daughter, and he helps Creely to appease her. 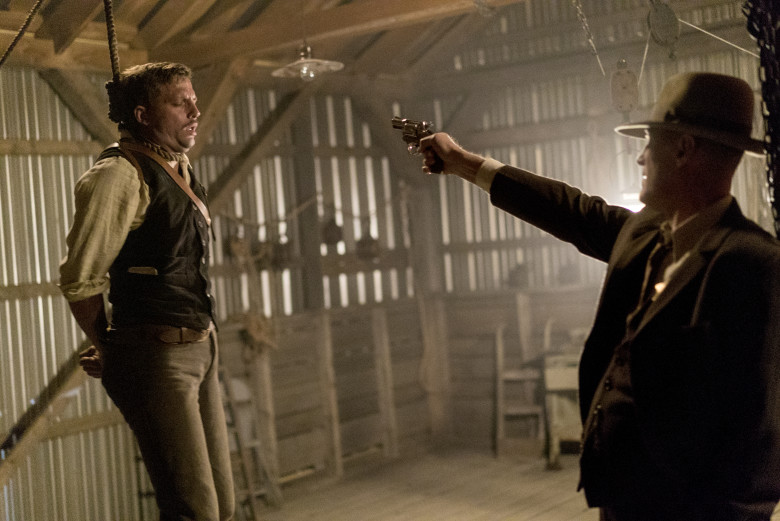 There are a few interesting moments I want to point out that really stuck with me.  The first is the opening scene of a couple watching their kids playing baseball and taking great joy in it.  When the wife goes into the shed to get the kids some cream soda, there are nooses hanging from the ceiling and Black Legion outfits hung up on the walls.  The man then exclaims to his wife, “If this isn’t the American dream, I don’t know what is.”  Damnation uses this banal setting, and these uneventful people to show how the American dream was an exclusionary ideal.  They look like normal people you’d run into, but underneath this veneer are racist secrets.  This prejudice was pervasive back then, but in Trump’s America this type of hatred and racism has become the norm once again.  It was disgusting then, and it’s disgusting now.

The second is the way Connie takes the child of the Harlan strike leader she’s killed, and makes the child her own.  She bends this little girl to her ways, and molds her to be just like her, something the girl’s father would have hated.  Connie tells her they’re going to Detroit to rid the world of bad men who won’t allow decent family men to work and support their families.  She’s trying to shape this girl into the same ruthless killer she is.  Connie is mean to this little girl, and it’s clear she’s a psychopath.  She needs to be stopped, or there will be a trail of blood left in her wake.

Lastly, when Amelia confronts Seth about his relationship with Creely he lies about it.  Even when given the opportunity to come clean, he’s unable to tell the truth about their relationship.  It’s not until she shows him the photo Creely gave her, that he admits Creely was responsible for the woman’s death, and everything he’s doing now is to right the wrong committed when she died.  What happened, and how have these two brother’s ended up mortal enemies?  It’s clear they’re cut from the same cloth, and even Amelia knows it.  There’s a moment when she and Bessie cross paths where Amelia says to her about Creely, “How does it feel to go around town with a psychopath?”  Bessie answers her back, “You tell me, at least I’m being paid for it.”  This moment hits home for Amelia, since she’s seen the violence Seth is capable of, and has no idea what Seth has done in his past.

Damnation continues to get better every episode, and the more the narrative progresses, the more intriguing the show becomes.  It’s one of those rare television series able to paint a portrait of a historical moment in American History, while also holding a mirror up to our present problems.