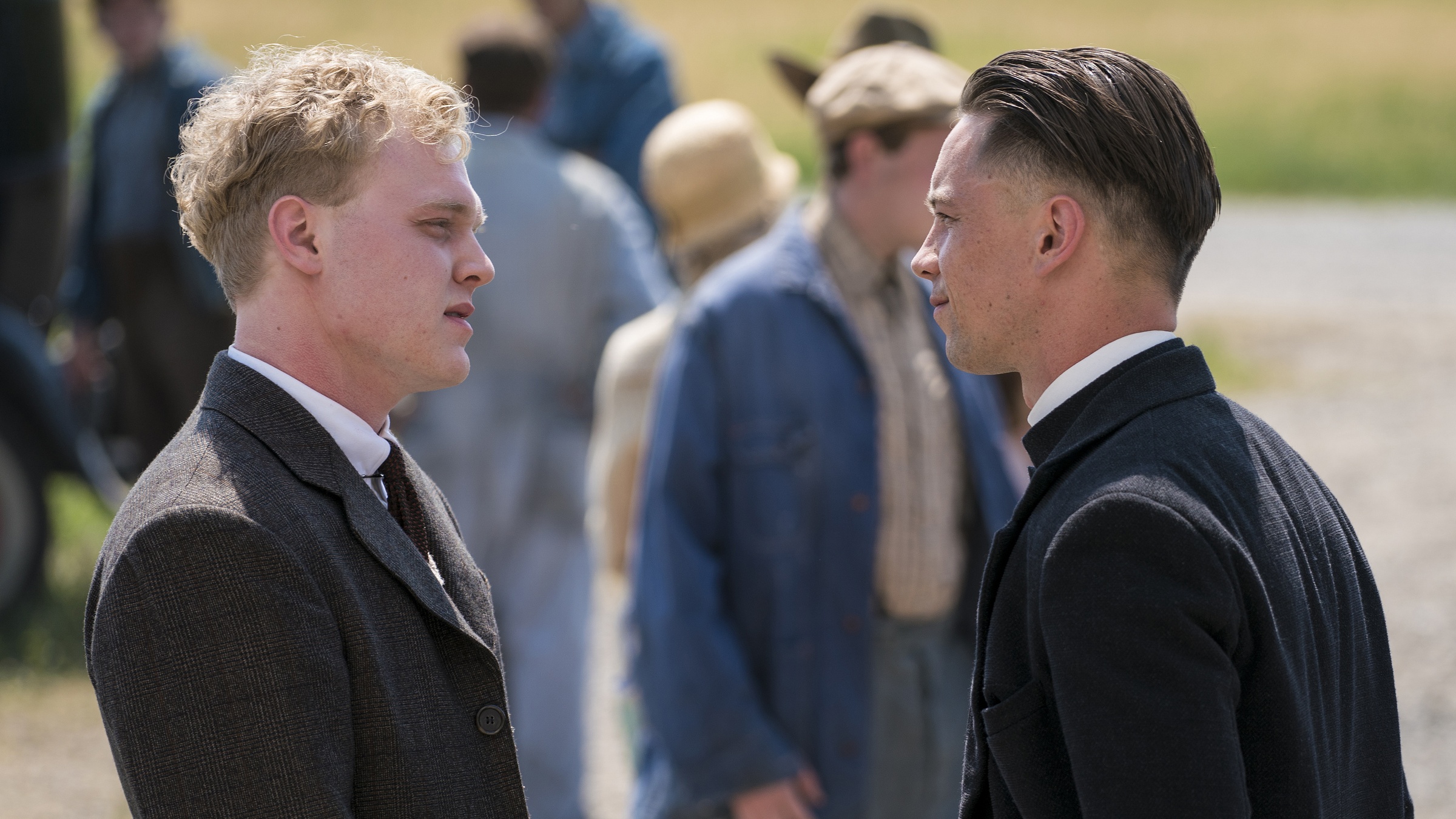 Seth stirs up a hornet’s nest of resentment on both sides after he nails Sam Riley’s body to the town bank.  The body hangs in a Christ like crucifixion pose across the doorway, wearing a sign around his neck reading, “Which side are you on?”  Sam’s body may have a bigger impact in death then the man ever had in life.  With fingers pointed on both sides at either Creely or Seth, tensions run high between the farmers and the businesses.  Will the town be able to come to an agreement before it’s too late, or will it be a casualty to the cause?

Tony Tost and his writers room delve into the history of the Great Depression in order to mine forgotten aspects of our political and social movements.  It’s incredible how prescient much of the struggles of the farmers depicted still are problems today.  Price fixing, bank negligence and dishonesty, politicians in the pockets of big business, the stifling of the labor movement when it’s needed most, and the inherent racism and protectionism of white Americans towards other races are all as topical today as they were in the 1930’s.  It’s as if little has actually changed 100 years later.  Damnation may be a historical television series, but it’s speaking to the America of today. 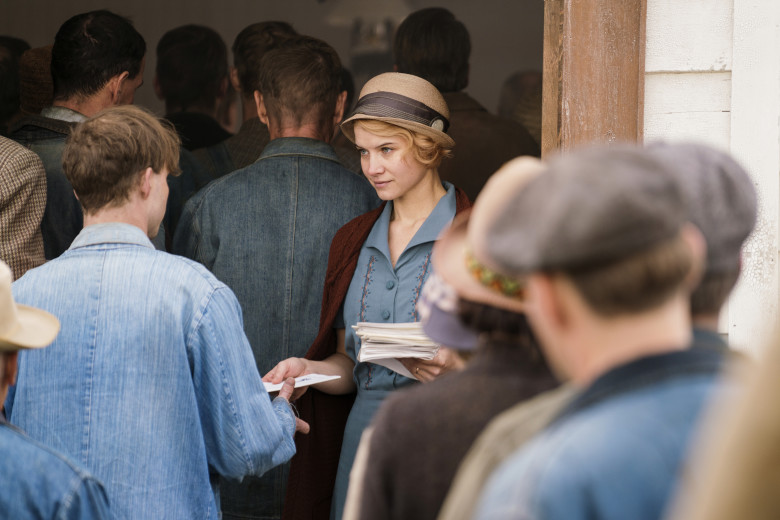 The relationship between Amelia and Seth is an interesting one.  They’ve been married for two years, and yet she still knows absolutely nothing about his past.  He may be the face of their movement, but she’s definitely the brains of the operation.  She writes pro-labor pamphlets and newsletters under the pen name of Dr. Samuel T. Hopkins that are filled with evidence and religious insinuations which align the labor movement with Christ’s teachings.  Amelia takes a softer, more subtle and intelligent route toward the same goals as Seth.  While he’s preaching the possibility of violent revolution against the status quo, she’s looking toward the future and longevity of the movement rather than as a war or uprising.  This doesn’t mean she isn’t prepared for bloodshed, she is.  In fact she’s the one who cleans up the messes Seth makes, either actually cleaning up the blood of the men who attacked her and Seth in their home, or hiding evidence of Seth’s involvement with the nailing of Sam Riley to the Bank.  She’s all in on the movement, but Seth may take her down a path she’d rather not go down.

Creely is a fascinating character.  Somewhere along the line he and Seth went from being brothers who were the only thing each other had in life, to being mortal enemies.  How did this happen, and what befell their parents?  Both men have a wildly violent streak, but their motivations are completely different.  Creely appears to work as a strikebreaker for the pay because his violent nature adapts well to this work.  Seth is motivated by idealism and righting an injustice he sees, but he’s every bit as violent as his brother.  Their two paths diverged at one point and sent them into a headlong collision course with each other.  Creely isn’t all evil though, just as Seth isn’t all good.  He takes the time to warn Amelia, and confront her with evidence that Seth’s enthusiasm and temperament have gotten at least one past wife killed.  The question is whether he tells Amelia this out of the goodness of his heart, or to drive a wedge between her and his brother. 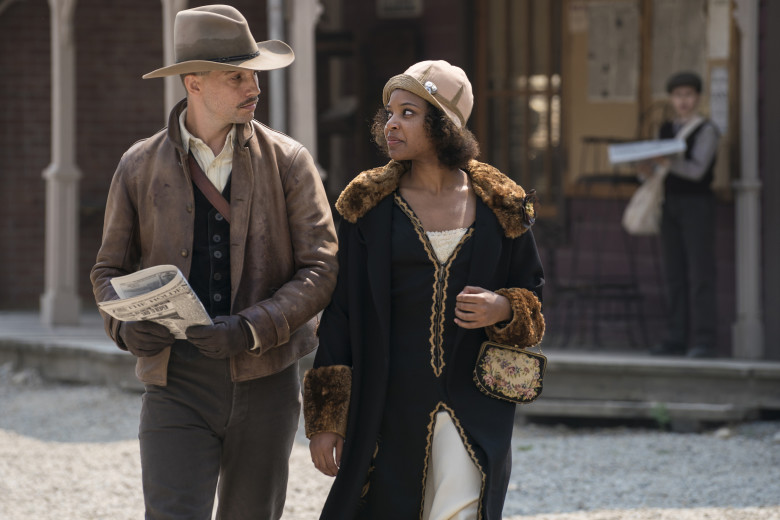 Damnation goes back and forth between Seth and Creely in Holden Iowa, and the miner’s strike in Harlan Kentucky.  There’s some connection between Seth and his movement, and the woman, Connie Nunn, who’s shown up to help break the strike there.  She’s looking for Seth, or anyone who knows anything about him in Harlan, claiming Seth is responsible for the death of her husband.  The real story is hard to tell, but I have a feeling she may be related to Creely and Seth in some way, or possibly even a jilted lover.  Connie appears in Harlan in the sheriff’s time of need and wreaks havoc on the peaceful strike, picking off people on both sides with her sniper’s rifle in order to sow the seeds of paranoia and unrest that’ll bring in the National Guard and break the strike for good.  She’s like the angel of death, and blends in on both sides.  She works her way into the strike leader’s house, and quickly kills him and his two friends while the man’s daughter is in the other room.  Her ability to turn off empathy and emotion to become a ruthless killer is more terrifying than anything else in the show.  When she finally catches up with Seth, it’s going to be bloody.

The Black Legion plays a prominent part in Holden Iowa, and appears to line up with the interests of the bank.  Historically they were a paramilitary splinter group from the Ku Klux Klan that sprang up in the Midwest to lash out against people they thought were either un-American or minorities they felt threatened their nativistic outlook.  The Black Legion attack Seth’s church, shooting several of the members before Seth pulls out his own pistol and shoots one of the black masked men.  This all happens in front of a newspaper reporter who’s waking up to the fact that something important and dangerous is taking place in his sleepy town.  Eventually Seth finds the man he shot, who turns out to be the town butcher.  Seth nearly kills him, but allows him to live in exchange for reporting everything The Black Legion plans. 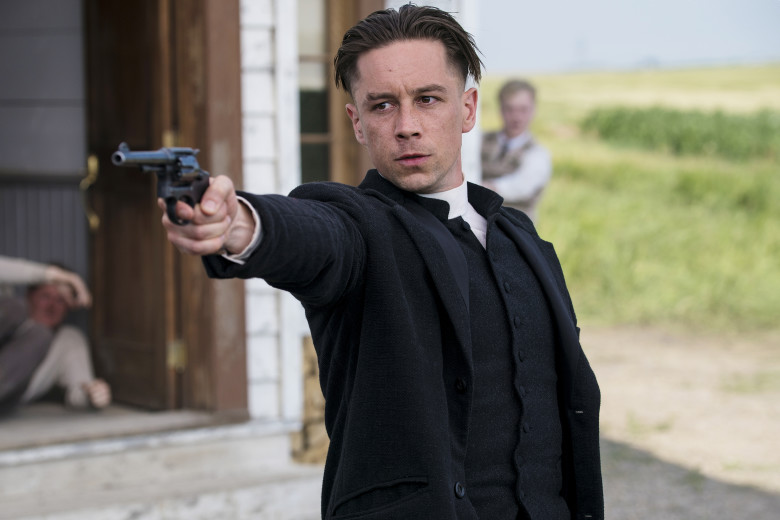 Sheriff Berryman is also feeling the pinch by the farmer’s strike and blockade, since his own speakeasy and gambling business are slowing down considerably.  He’s on the fence about his loyalties, and it is clouded even further since Bessie is his bastard child who he hasn’t publicly acknowledged.  The fact that she’s a prostitute, and has taken up with Creely, bothers the sheriff deeply.  He doesn’t like Creely, but he also doesn’t like Seth.  Right now he’s stuck in the middle of two warring factions, unable to decide which side to align with.  The clock is running out quickly, and he doesn’t have time to sit on the fence much longer before his town descends into chaos.