On this week’s installment of DESIGNATED SURVIVOR, we get the show continuing to tackle real world issues in a manner we wish our real government would, now more than ever (too late to elect Kirkman to replace the current one in office? No?). The topic at hand is the divisive one of gun control legislation. I admire the writers for not playing it safe and trying to keep balance at the same time. The episode also went full-on House of Cards and dived into the intricacies and strategies of the political process, showing what it takes to lobby votes and get an important bill passed through Congress. Let us breakdown all of the expert maneuvering.

The episode starts with President Kirkman (Kiefer Sutherland) holding a press conference to soften the blow from the damage of Senator Bowman’s flawed gun-control bill. Kirkman, as Presidential as ever, confidently and publicly challenges Congress to come up with stronger legislation. Now that the gauntlet has been thrown down, Kirkman gets to work and meets with a Massachusetts senator to help improve the bill in order to please the Democrats (remember last week we found out that Kirkman is actually an…..independent!). The only conflict is that there are 46 Democrats on the Senate and they need 51 votes to pass the bill. This means they need 4 Republican votes on their side. Nothing in government is ever easy! Kirkman is trying to use the main selling point that the bill would expand on background checks, but take away firearms from the country’s citizens. Kirkman and his staff meet separately with the 4 Republicans that are moderate enough to vote in their favor. Lucky for us, our favorite congress figure, Speaker Hookstraten (Virginia Madsen), is in the mix of it all. She and Aaron, who is now part of her team, talk strategy no how they should play this bill in their favor. She always has larger goals in mind. Since she is considered one of the top Republicans in D.C., she decides to sit down with Senator Bowman talk some sense into his misguided attempts at sabotaging Kirkman’s efforts. All formality goes out the window and he tells Hookstraten to get out of his way. A Republican going rogue, now where have I seen that, let me think…..back to important matters. Hookstraten keeps her cool, but as a viewer, I truly wanted her to chew him out and give him a piece of her mind, but there is a time and place for everything. So much for making nice, Hookstraten goes to Kirkman and tells him that she will help with getting the needed Republican votes. Kirkman thanks her and tells her he will remember this gesture in the future, which is all she needed to hear. She is always after something bigger and will most likely revisit this conversation on a later date. This is why we love Hookstraten, she is always scheming and we can never fully read her motives. 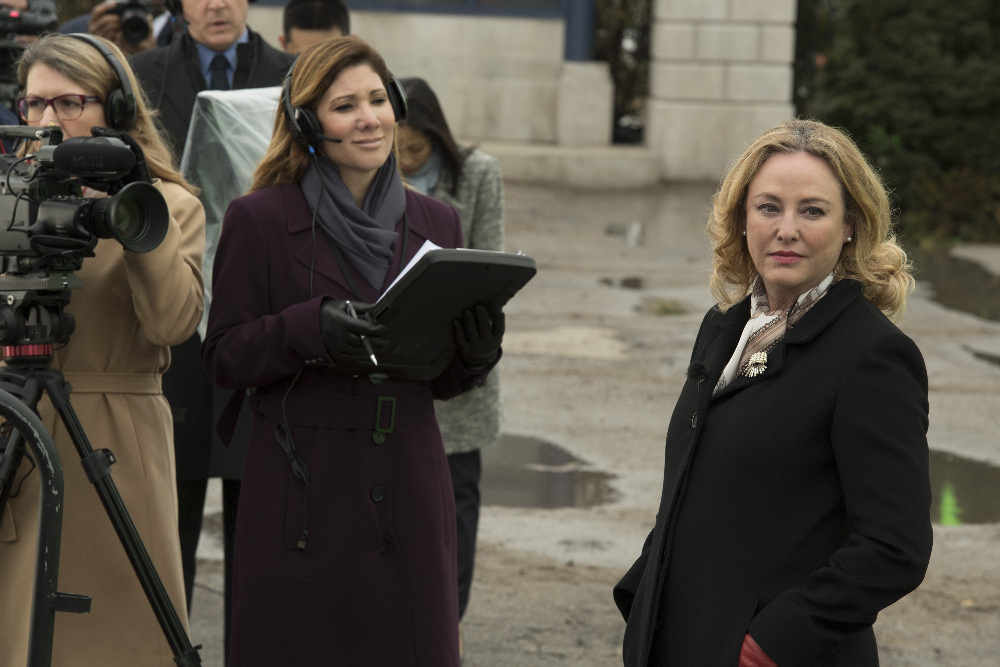 Kirkman appears to have all of his best players in action because he also has former President Moss (now Secretary of State) doing his bidding as well. Moss does some lobbying and meets with close contacts in the Senate to do the right thing and vote with their conscience. He has a spirited lunch with one of those contacts and pretty much shuts down all formality to bluntly tell his colleague to vote in their favor and that he is not asking, he is telling him. Moss is clearly not a guy to have as an enemy.

Also helping in the gun-control bill getting passed is new Chief-of-Staff Emily, doing plenty of the heavy lifting in making the calls and getting those votes in Kirkman’s favor. She meets with Aaron for post-work drinks and the two clearly still have some residual mutual attraction that people on political shows normally do, especially if they are as attractive as these two. I’m sure another make out session is in the future for these lovebirds, but I digress. The main point of their meeting is to talk shop. The two strike a deal with Hookstraten helping to secure the needed Republican votes in exchange for Kirkman’s consideration of Hookstraten as the new Vice President. I have a feeling this deal will complicated down the road. The First Lady meets with a group of people, who have all been affected my gun violence. They express their concerns about the state of gun laws in the country and she is clearly moved by their harrowing stories. She tells Kirkman that the gun-control bill passing is imperative for the state of the country. Later on, after meeting with a Democratic senator, she runs into Bowman and his colleagues, who appear to be giving her the cold shoulder (what is this, high school?!). In the best moment that the First Lady has had on the show (the writers haven’t given her much to work with), she shuts down Bowman’s condescending attitude and puts him in his place by shaming him for his aggressive and non-compromising stance on the gun-control issue. It was great to see the First Lady show strength in the face of adversity and the writers would be wise to give her more moments like this and just give her more compelling material. The moment finally arrives and everyone nervously watches as the votes come in. Of course, being the show that this is, the numbers are neck-to-neck. The Republican senator from Alaska, who Kirkman worked hard in swaying her vote, decides to vote against the bill and seemingly crushing everyone’s hope in passing it. Since the show does love a good twist, a moment no one saw coming, Senator Vandenberg, whose husband was known for being very against gun-control legislation, decides to do the right thing and vote in favor of passing the bill, thus giving Kirkman enough votes to pass the bill. It turns out Vandenberg was moved by the First Lady standing up to Bowman and voted with her heart. It’s nice to see good things happen in D.C., if only we just stay in this fantasy world.

Meanwhile in conspiracy land, Agent Wells shows Ritter, from a hidden location, the landmark bombing simulations she discovered in last week’s episode. He informs her that he will relay the information to Kirkman. We still don’t know if these are rejected plans or plans for future attacks. More concrete evidence is needed. Wells and her team do some digging into a military-industrial entity known as Browning Reed. They are a secretive mercenary group of soldiers-for-hire and go-to private military for the Pentagon. They conducted some morally questionable acts during the Afghanistan war and the group was quickly dissolved thereafter.  Turns out that they are still actively paying rent on a property in North Dakota. The records show Brooke Mathison, who was shot by Atwood, made many visits to the location. Wells, with the help of Atwood, travel to North Dakota to see what this place is all about. When they arrive, there is no property and just a large open field, but they soon discover that the location is underground. They walk around the abandoned facility and discover large amounts of bombs in cases, that also resemble the one used in the Capitol Hill bombing. Wells mentions there are enough explosives to bomb three Capitol Hills. Does this confirm that more attacks are on the horizon? Time will tell.

This week’s episode was one of the better ones I’ve seen, mainly because it was more focused and allowed all of the characters to work as a team for a common cause. We also have a new villain in Bowman, who is effective in conveying male egotism on a sleazy level. It was also wonderful seeing him spar with Hookstraten, who continues to be one of the best characters on the show. I would totally watch a spin-off of her character. It was also fascinating to watch the process and the challenges to get a divisive bill off the ground and passed through Congress. It’s no easy feat and the victory of it passing was done in a surprisingly touching manner. My only complaint is that the conspiracy stuff is starting to drag a bit and in order for us to stay compelled, we need some juicier reveals. Hopefully the build up will be worth it for a strong season finale. See you next week!