This week’s episode of DESIGNATED SURVIVOR is entitled “The Enemy” because it appears that President Kirkman (Kiefer Sutherland) is racking up many of them both inside and outside the White House. This was a jam-packed episode with many plot points propelling things forward and continuing the quick pace that the show has established for itself.

The episode opens by plunging us straight into the action of what appears to be an American undercover agent in the Middle East, running away from some seemingly not-so-good guys chasing after him. He quickly finds a hiding spot to send a distress signal of his whereabouts to the White House, but is caught and taken away as a prisoner. Kirkman has only had about three hours of sleep (when you’re president you are in high demand) before Aaron Shore (Adan Canto), his newly appointed Chief of Staff, informs him that they found the location of Al-Sikar, who is (supposedly) taking claim for the Capitol Hill bombing. We are quickly whisked away to the Situation Room, where General Cochran (Kevin McNally) or as I like to call him, General Trigger-Happy, is gung-ho as usual about bombing Al-Sikar, especially now that they know the location is in Algeria. Kirkman, as usual, would like to take a more measured approach since they have an American agent, who has been captured and would prefer to him out of harms way. Of course General Trigger-Happy is having none of this and would like to make the order the attack. Kirkman once again reminds the the General that the President is the one who makes the final call (can’t these two just sit down, share a beer and work it out). Kirkman tries to make a diplomatic call to the Algerian President, but makes no headway. General Trigger-Happy makes a call behind Kirkman’s back to send American forces into the Algerian airspace. Kirkman is none too pleased with General Trigger-Happy and has had enough of his shenanigans, firing the General once and for all. It’s in these moments, when Kirkman feels cornered, that his inner Jack Bauer is unleashed and you better not be on the receiving end of that fury. I have a feeling though that we have not seen the last of General Trigger-Happy, especially since he was more than willing to covertly take out Kirkman for the better of the country. Elsewhere in the White House, Congresswoman Hookstraten (Virginia Madsen) meets with Kirkman in order to tell him that the American public is growing restless with him not taking any action against Al-Sikar. These two continue to disagree and will only continue to do so, now that we know Hookstraten has made her decision to become an adversary to Kirkman, based on her conversation with Aaron, who she pulls aside to inform that he has sided with the wrong team and he would be wise to side with her. She is not happy with the way Kirkman is running things and seems to have some tricks up her sleeve to make some necessary changes. I knew she was up to no good. Poor Kirkman, he can’t seem to catch a break. That wasn’t the last we saw of Hookstraten, the First Lady meets with her to get help for a client (we are reminded that the First Lady is still a lawyer and being First Lady isn’t going to stop her) that is in danger of being deported. Hookstraten decides to help her, but only as an indebted favor, which she will look to collect at another time. I sense some foreshadowing that Hookstraten will pit First Lady against the President in the future that will certainly create some juicy drama. 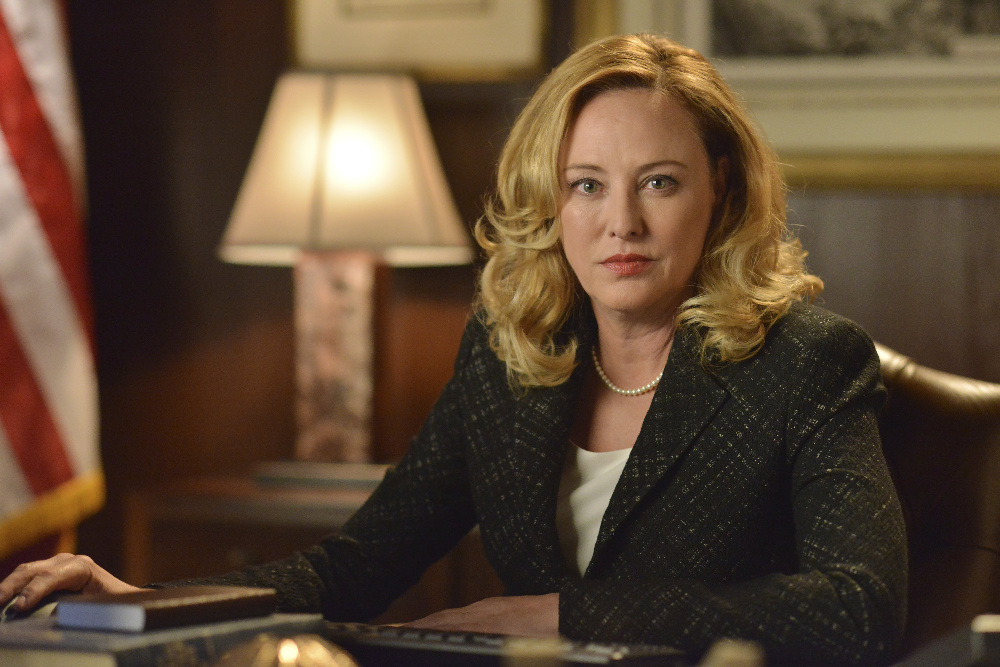 As if the President doesn’t have enough on his plate, everyone’s favorite annoying Michigan Governor is back and Royce (Michael Gaston) is still up to his old dirty tricks. He is still very much anti-Muslim and refuses to recognize Kirkman as his President, based on that televised interview last week, which revealed Kirkman was on shaky ground with the previous President. Royce feels that Kirkman has no jurisdiction in Michigan and can go back to being discriminatory towards the Muslim community. This does not sit well with the Michigan Muslim community, who gathering to protest Royce and his anti-Muslim ways. Kirkman’s team sends Emily (Italia Ricci) to Michigan to observe the situation. When she arrives, she is greeted with a military brigade and the press, who Royce addresses to announce that he rejects Kirkman as President because he is not qualified for the job. Feeling cornered, Kirkman, with the advice from lawyer First Lady, decides to send in the national guard to overthrow Royce, which backfires due to their annoying loyalty to Royce. Emily quickly assembles the protesters to her location and they are captured on camera, which creates a PR nightmare for Royce. Emily proposes he meet with Kirkman in person, who she feels is a reasonable man. Once Royce lands in D.C., he is quickly put into custody by Kirkman (in Jack Bauer mode), who feels that Royce has disobeyed the President’s orders one too many times. Emily is left in shock, but Kirkman has got to put his foot down. Being President is no easy job. On a much lighter note, the Kirkman administration has appointed a new press secretary, some young guy names Carter, who is a nervous wreck during the questioning from the press. He is so nervous that he ends up rushing off of the podium, which Seth Wright (Kal Penn) watches in horror and ends up quickly taking over to save the dignity of the White House. Turns out he is a natural and a perfect fit for the job, which Kirkman decides to make him official. Looks like his speech writing days are gone.

Outside of the White House, FBI agent Wells (Maggie Q) continues her quest in finding the real threat of the attack. She questions the survivor of the attack, congressman MacLeish, who as we found out from last week’s episode was photographed being away from his seat, only moments before the bomb went off. MacLeish’s wife informs Wells that she was having an issue with their daughter and was bombarding him with calls and text messages. The story checks out and Wells is feeling anguished due to her grief over the loss of the congressman she was seeing. This wouldn’t be Designated Survivor though, if there wasn’t a twist. A mysterious woman calls Wells telling her to find room 105. What’s in room 105? Is McLeish back to being a suspect? Will we get answers or more dead-ends? Finally, Kirkman, facing the loss of the American agent, decides to make the tough call and invade Algeria, which means folks, we are going to war! I have a feeling there will be some serious consequences for this call, but Kirkman could really use a win right now.

This episode was written by Dana Ledoux Miller and Jon Harman Feldmon and they packed this episode to the gills with many plots, maybe too much plot. The show continues to function as a hybrid of Homeland/Quantico and The West Wing/House of Cards, which might be too much for any show to handle. The story line involving the First Lady and her client felt like an afterthought and messed with the pacing of the other more engrossing plot points of the episode. Also, besides Kirkman, the other characters are still not being given enough depth, though Wells is starting to develop with more emotional beats. Overall though, the show continues to move at a quick pace and throws fun twists at the viewers to keep our interest into how this all going to turn out for Kirkman and the country. We will be back in two weeks, when the next episode airs, so see you then!