Tweetable Takeaway: Clara’s demise leads to the most impactful and well done episode of the season. Tweet

This entire season of DOCTOR WHO there has been a buzz around Clara leaving the show and how it would happen. In a first since the reboot (if you exclude Rory since he always came back), the writers finally killed a companion! It was a fitting good-bye to the impossible girl who turned impossibly reckless. The episode as a whole was by far the best of the series. It had the ability and quick writing to tie in two different story lines from this series, as well as a nice character from series 8. Not only did the episode pack all that in, it also told a compelling story in a single episode.

The episode “Face the Raven” delivered on every single aspect a Doctor Who fan could want. It made you feel for Clara again (after so long when frankly I was just waiting for her to go), it made you incredibly excited for the last two episodes of the season, and it let you feel all the emotions that a good Doctor Who episode should deliver on. During this weeks installment the writers cleverly tied Ashildr/Me back into the series, as well as The Doctor’s last will and testament from the first two episodes. It finally feels like (at least most of the episodes) served a purpose in a grand scheme that we have been so cleverly not seen yet. Almost as if the writers had set up a brilliant misdirection circuit so we the viewers couldn’t see what was going actually go on.

The episode starts with Clara and The Doctor rushing into the TARDIS after escaping from some aliens and presumably being kicked out of the second most beautiful garden in the universe because of something Clara had done (spoiler she is still reckless). Upon returning to the TARDIS Rigsby, from “Flatline”, calls Clara because he was in trouble. The Doctor and Clara respond in their normal fashion, and after a bit of sleuth work, they find the “missing street” where Rigsby was taken. Upon entering this refugee camp for all types of aliens, including Cybermen, the Ood, the Judoon, and a number of other famous aliens, The Doctor, Clara, and Rigsby are locked down by a force field. Enter Me. As Mayor Me returns, yet again, the story really gets going. We find out that she put the chrono-lock a.k.a. death sentence on Rigsby for a murder he does not remember committing.

The rest of the episode revolves around The Doctor and Clara trying to prove Rigsby’s innocence as well as Clara acting fairly foolishly. As the episode progresses Clara realizes that she can take “the death sentence” from Rigsby. She reasons that they will discover what really happened to Rigsby, and if not Me would not let her die. Sadly for Clara she was very wrong. This is where a mystery wrapped inside a problem, enveloped into an enigma comes about. The Doctor and all discover that this was one giant trap. Rigsby never killed anyone and this was designed so that The Doctor, and only The Doctor, could save the poor woman who was presumably dead. By saving her The Doctor loses his TARDIS key and gets a transport bracelet trapped on him.

Just as The Doctor thinks it can’t get any worse, this is when Clara reveals that the chrono-lock as been moved to her. In a twist she didn’t see coming Me can no longer remove it. The contract had been changed and she has no power to change it. One can only think that this was all a carefully manipulated situation designed to make Clara take the chrono-lock and die in front of The Doctor. I don’t think anything that happened on this street was a coincidence. This may be a story arch that caries over into most of the next series. 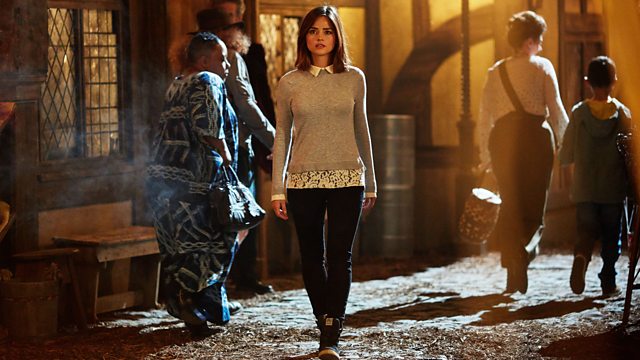 I don’t want to ruin Clara’s wonderful monologue to The Doctor as she accepts her fate. I suggest going online and rewatching it. The last 5-10 minutes of the episode was truly amazing. As the episode draws to a close The Doctor warns Me that he is not a good person to make an enemy of and we are reminded of the likes of the War Doctor and episodes gone by like “When A Good Man Goes to War”. The Doctor has a dark side and his enemies may have forgotten this. Time will tell whether The Doctor can get through this without hurting anyone or seeking revenge. I suspect it will all come down to the next person he travels with.