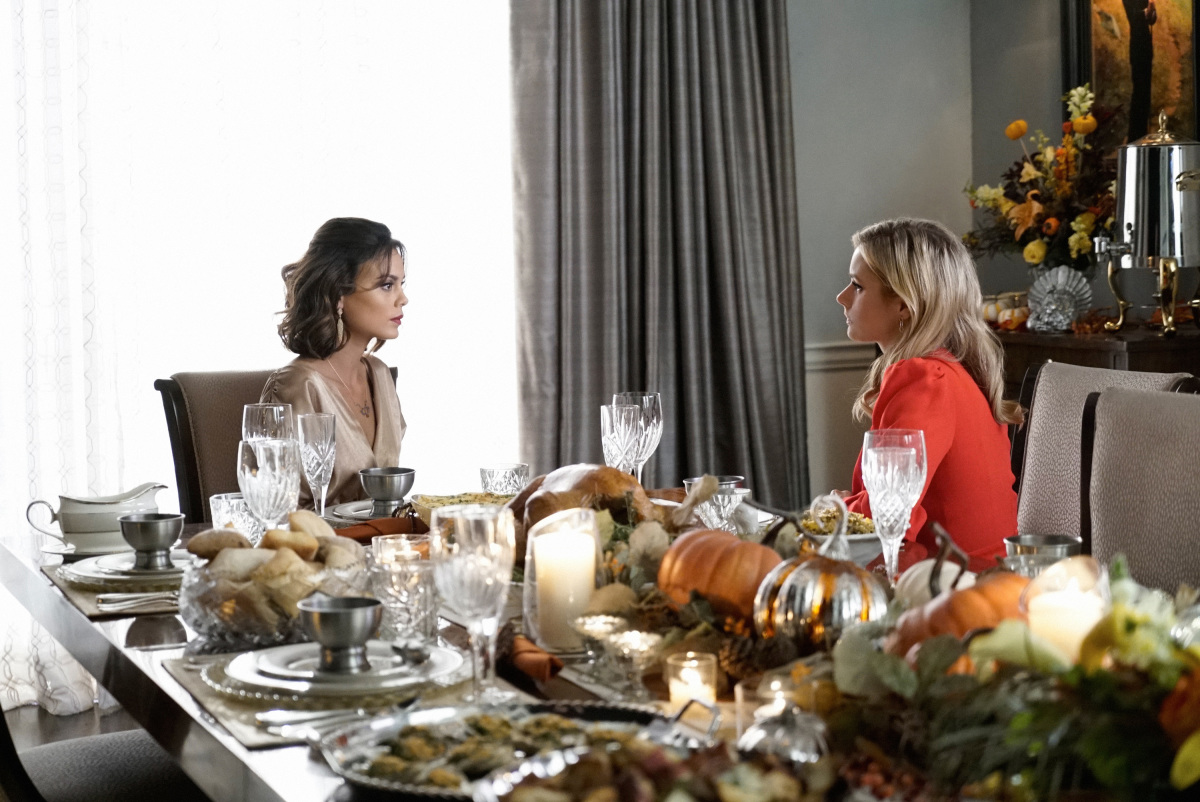 This week on Dynasty we got a Thanksgiving dinner that finally started to climb to the over the top dramatic heights I want out of this show. Fallon is at her glorious, campy best in addition to getting a few opportunities to show that she’s not a total demon, we get to spend more time with Culhane, and somebody pulls a gun at Thanksgiving. It’s Christmas. (Speaking of which — my kingdom for a holiday episode.)

Claudia is still staying with the Carringtons after Cristal and Sammy realized her medications were not actually what they were advertised to be; they’re suspicious that somebody is drugging Claudia to keep her from remembering something important. I (rightly, as it turns out) found this to be really bizarre. Claudia is sketchy as all get out literally all the time, so it was a little wild to me that Cristal and Sammy kept treating her like a wounded puppy when everything she did appeared to be really intentioned — it was, spoilers — but more on that in a sec. 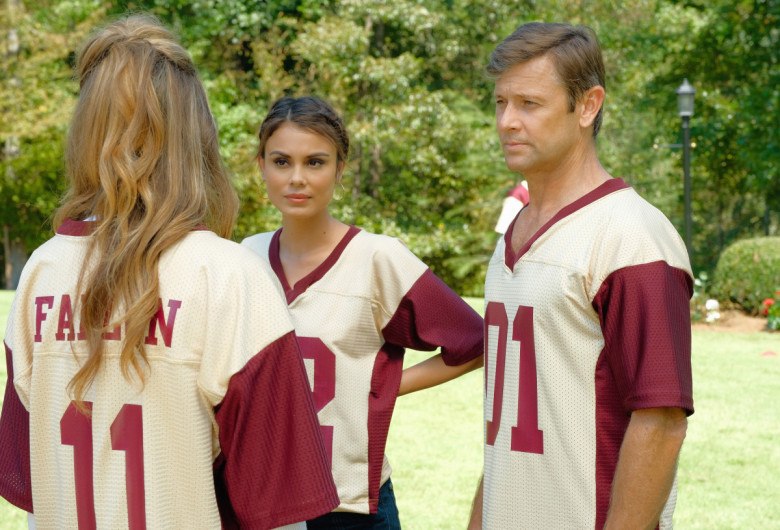 We start of the Thanksgiving festivities with what’s apparently an annual Thanksgiving football game, Carringtons vs. Staff, plus some actual pro football players. As a Pittsburgher, I was pretty elated to see Hines Ward, and would love this episode for that alone — just to disclose my bias off the bat… Blake tries to mediate between Fallon and Cristal, forcing Fallon to offer Cristal a rather empty apology. Fallon then proceeds to kiss and flirt with half the staff, remarking to Cristal, “and yet not one sex tape.” Terrible, inappropriate joke… But really well delivered and hilarious, honestly. This is the last straw for Blake, who kicks Fallon out. Surprisingly, Cristal comes to Fallon’s defense, saying that Thanksgiving is a family holiday, but Blake won’t budge.

Once kicked out, Fallon calls Jeff, who apparently invited her somewhere for the holiday previously. She’s too late, however, and so she ends up following Culhane to the soup kitchen where he volunteers. There she learns that he’s been lying to his family. He was a bit of a golden boy growing up, heading off to college on a full ride for football and expected to go pro, but he got injured, which ended his career. His parents sacrificed a lot to make sure that he could finish college without his scholarship and still make something of himself, but since he hasn’t been successful, he told his parents he’s a VP at Carrington Atlantic rather than a chauffeur — so to them, Fallon is his coworker. Fallon goes along with the ruse almost without blinking, which is really nice and necessary after she’s been so relentlessly awful, to see her do something without getting anything exchange.

She and Culhane bond a bit, and he eventually accepts some culpability for the fact that he and Fallon, despite being involved for however long, were still really distant from one another. It’s nice to see them make up, and to see Fallon have a genuine relationship in her life. It’s not that the sort of quid pro quo she generally seems to get involved with isn’t something that appears to appeal to Fallon, and it’s not like she doesn’t seem to require something from everybody, but this episode gave her some extra moments of humanity. Elizabeth Gillies is a bit of a gift, too.

Culhane convinces Fallon to go home for Thanksgiving dinner, because she only gets one family. I additionally really like the development of their relationship not just because it’s nice to see Fallon with an actual human friend, but because Culhane knows the Carringtons in addition to being a functioning human being with accessible human emotions, so he’s a good perspective for her to have around.

Unfortunately, things on the home front are a bit of a miss. Claudia has been playing the Carringtons, and locks Sammy and Anders in separate rooms in the basement so that she can get Cristal and Blake alone. She holds them at gun point, and we find out that Claudia’s mystery benzos weren’t the work of some criminal mastermind — they’re just evidence of Claudia’s pill habit. She announces that her intention was to seduce and then kill Blake (duh, guys, duh) so that Cristal would know what Claudia herself went through when Cristal had her affair with Matthew. Before anything goes south, Fallon comes in.

Nerves of steel (which we later find out are probably just because she thinks the gun Claudia has doesn’t work, but it’s been fixed by Anders since Fallon last saw it), Fallon launches in to her recent realization. While at the soup kitchen, she had a chat with a little girl who was building a catapult out of straws, and Fallon encouraged her, saying women can do anything, including be engineers. This jogged her memory and reminded her that when she was younger and thinking about becoming an engineer, her father got Matthew to talk to her about it, and Matthew told Fallon that his wife was an engineer. 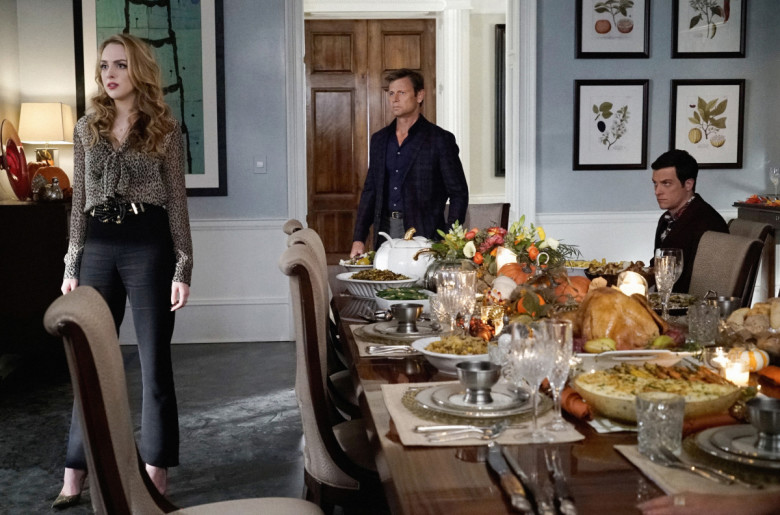 Remember now Claudia’s skillset, Fallon rightly realizes that there’s one more suspect who had the motive and means to kill Matthew: Claudia. Fallon gets Claudia talking — one of her best skills, honestly — and Claudia admits to faking her brain injury so that Matthew would stop cheating. Meanwhile, Anders and Sammy are making their way back upstairs, but arrive just in time to see the Carrington family wrestle the gun out of Claudia’s grasp. No injuries, no fatalities, just a reasonably well executed twist and an incredibly dramatic Thanksgiving dinner. Everything I want out of Dynasty.

The last bit of plot we get thrown into the mix is that Cristal’s past is coming for her. The men Cristal stole from are in the U.S., and are trying to track her down. Bad timing, since she and Fallon more or less made peace after the incident with Claudia, and this is definitely going to throw a wrench into that. Extra bad timing, because Cristal and Blake have just decided to start trying for a baby. But also good timing, because if you’re going to remake one of the campiest, soapiest shows of all time, you should really go all out. So here’s to hoping there’s more craziness to come.