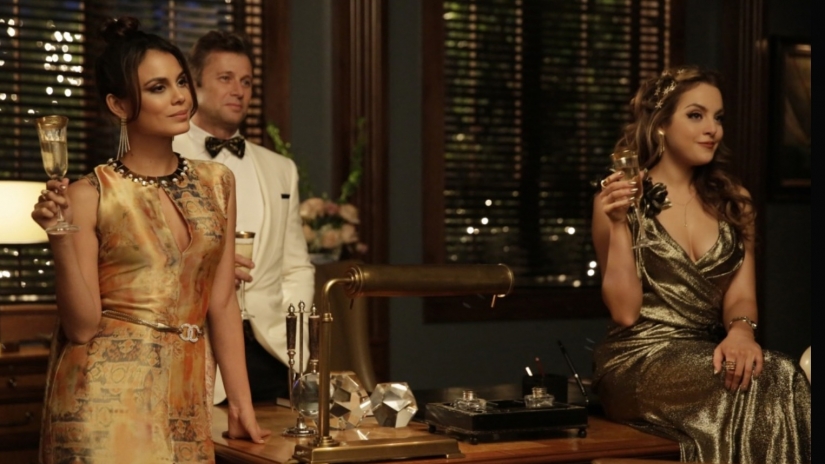 Dynasty is back and it’s dramatic as hell and really, what more do you want from this show? Following the blowout that culminated in Cristal revealing to the family that the reason for all her familial secrecy and drama is that, while still in Venezuela, Cristal murdered her sister’s husband. Sammy Jo thought his father abandoned the family, so this creates additional issues with him because he feels like he’s been betrayed and lied to by Cristal. That’s fair enough, but it’s weird that he doesn’t also get mad at his mother for fostering that lie. Not that she had much of an option — “your aunt murdered your father who was, by the way, super abusive and then fled to the US” isn’t really a kid-appropriate share.

So when we get back into Dynasty, nobody’s is speaking to Cristal, except for Fallon, who’s being especially cruel now that her father and Cristal are on the outs and Cristal doesn’t have a defender. Steven is still lurking around the house but isn’t (presumably) speaking to Blake. Anders tries to get him to go to rehab, but he refuses on the grounds that addiction isn’t his issue (which seems like a weird stance for even a recovering addict to take) but it’s the guilt from knowing that he caused that guy’s death, and was never really accountable for it. While the details of this plot line sort of bump me for a number of reasons — not the least of which is, again, the fact that everybody is so blasé about the fact that Steven just relapsed on his drug addiction — but overall it’s about Steven taking responsibility from his actions in a way that his father and his privilege shielded him from. That’s a story worth telling, and I hope Dynasty really tells it — but more on Steven when it’s chronologically appropriate.

Fallon sees Monica, Jeff’s sister and her supposed BFF, leaving Culhane’s and doesn’t miss the opportunity to spar with her. Monica definitely went to Culhane to get back at Fallon for sleeping with her brother, and it definitely worked as a mode of pissing Fallon off. But Fallon is also in deeper with Jeff now, and they decided to pursue an actual relationship at the end of the last episode. Fallon spends a lot of this episode panicking a bit about the seriousness of it, and about how she doesn’t like relationships or commitment. A bit of a pep talk with Culhane while she’s setting up for her appropriately extra birthday party seems to convince her Jeff is worth going in on… but not just in the relationship sense.

Fallon’s twenty-fifth birthday also apparently means she finally has access to her trust fund. Jeff is trying to convince her to put it into their company and go all in on both them as business parters and them as a couple. Since we now know Jeff is just trying to screw over the Carrington family for revenge, EVERY PART OF THIS PLOT MAKES ME WANT TO SCREAM, to be honest. Not that Fallon isn’t a rich b*tch who probably deserves a little comeuppance more often than not, but she isn’t a bad person. She makes sure to ask after the wellbeing of the people she cares about, she listens to their problems even as she makes snide remarks about how she’s self-centered, and I don’t love the idea of spending too much more time watching Jeff build up to absolutely ruining her. It’s SO STRESSFUL. I guess that’s the point, but I was pacing around my living room like my grandma watching a tight Steelers’ game any time Fallon interacted with Jeff or mentioned him at all. 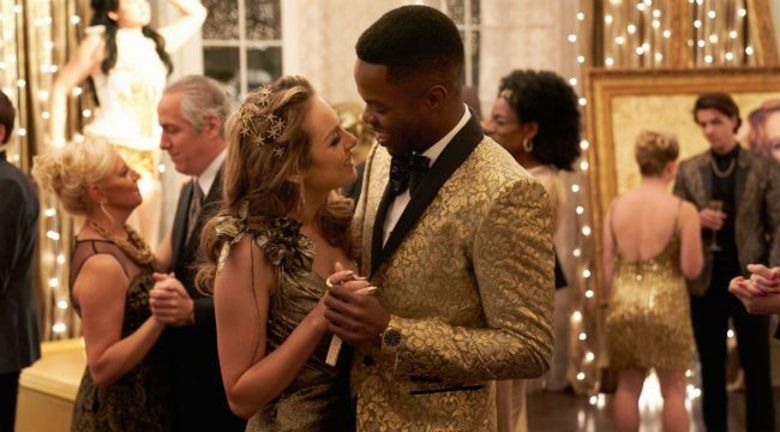 Jeff’s plan is even worse than originally anticipated, we find out at the very end of the episode — he calls his father in prison to reveal that he plans on absorbing Carrington Atlantic rather than bringing it down, which he’ll do by marrying Fallon and getting her shares and money and so forth. I highly doubt we’re going to get that far down the line with them — they’ve only just started dating — before Fallon finds out something’s up, but I also think his plan is a liiiiittle silly because I see no universe in which Fallon Carrington goes into a marriage without a super intense, ironclad prenup (which she would obviously insist upon her significant other having as well) but like I said. Stress. So much stress.

At Fallon’s actual birthday party, everything reaches its climax. Far as we’ve seen, Cristal has been lying to Blake — the Venezuelan business man looking to make a deal with Blake is actually Cristal’s supposedly murdered brother-in-law who somehow survived, and returned to seek revenge. Cristal’s sister and Sammy Jo appear to be on his side, and with the Carringtons icing Cristal out, the resolution looks bleak.

But the big reveal is super satisfying — Cristal did, in fact, tell Blake what was going on rather than let herself be blackmailed. Blake enlisted Fallon and Sammy Jo’s help in exposing Sammy Jo’s father as a criminal, and it ends with this in-freaking-credible shot in Blake’s office where the whole family — Carringtons and Sammy Jo — standing in their ridiculous formalwear watching this guy realize he messed with the wrong family. I loved it so much. Cristal thanks Fallon specifically, since Fallon is the real surprise team member, and Fallon of course insists it doesn’t mean they’re pals now — but they’re at least a little bit less of enemies. Cristal and Blake make up (or out, after Blake throws a piece of cake onto the bedroom floor. Poor Anders.) 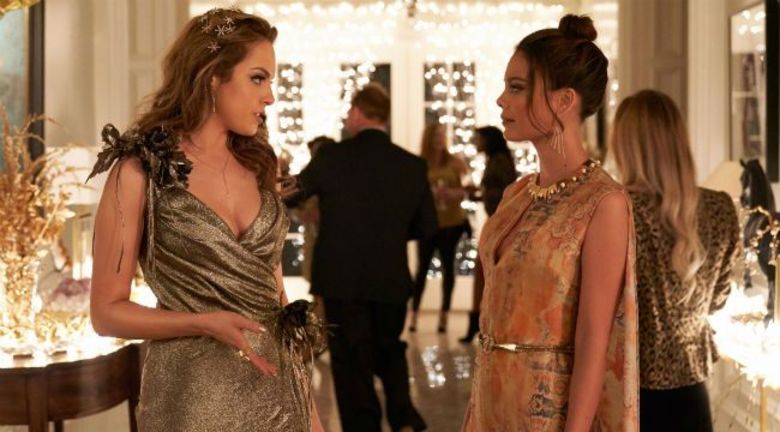 Steven, meanwhile, takes Sammy Jo with him to pawn some expensive watches, and uses the $20,000 he gets to give to the widow of the guy Steven’s mistake killed. Sammy Jo is proud of him, Steven feels better, and when Steven eventually tells Blake about it Blake is proud of him too. Like I said, overall, I’m into this plot — but why is nobody pointing out to Steven that if Blake covered for him to prevent him getting in trouble, publicly owning up to his error that lead to a man’s death is like… a really bad plan. That aside, Steven feels motivated by the good feeling he gets from taking accountability for his mistakes to start living life on his own terms, without the comfortable safety net of millions of dollars his family provides. He and Fallon have an incredibly sweet exchange where Steven gives her a lighter he bought in the pawn shop because it reminded him of their mother’s — can’t wait for her to appear dramatically at the end of the season, or some other future point — and says he plans to move out and figure his life out the next day. I hope this means we won’t lose Steven; for one, he and Fallon are wonderful together, and for another, like I said, this is a story I’m interested in hearing if it’s done well.

The last beat of the episode is Cristal’s sister reappearing and kidnapping Fallon, which I hate, but here we are. This was a thoroughly enjoyable reentry into Dynasty, and I would die for Fallon Carrington, and that’s really all I have to say about that.