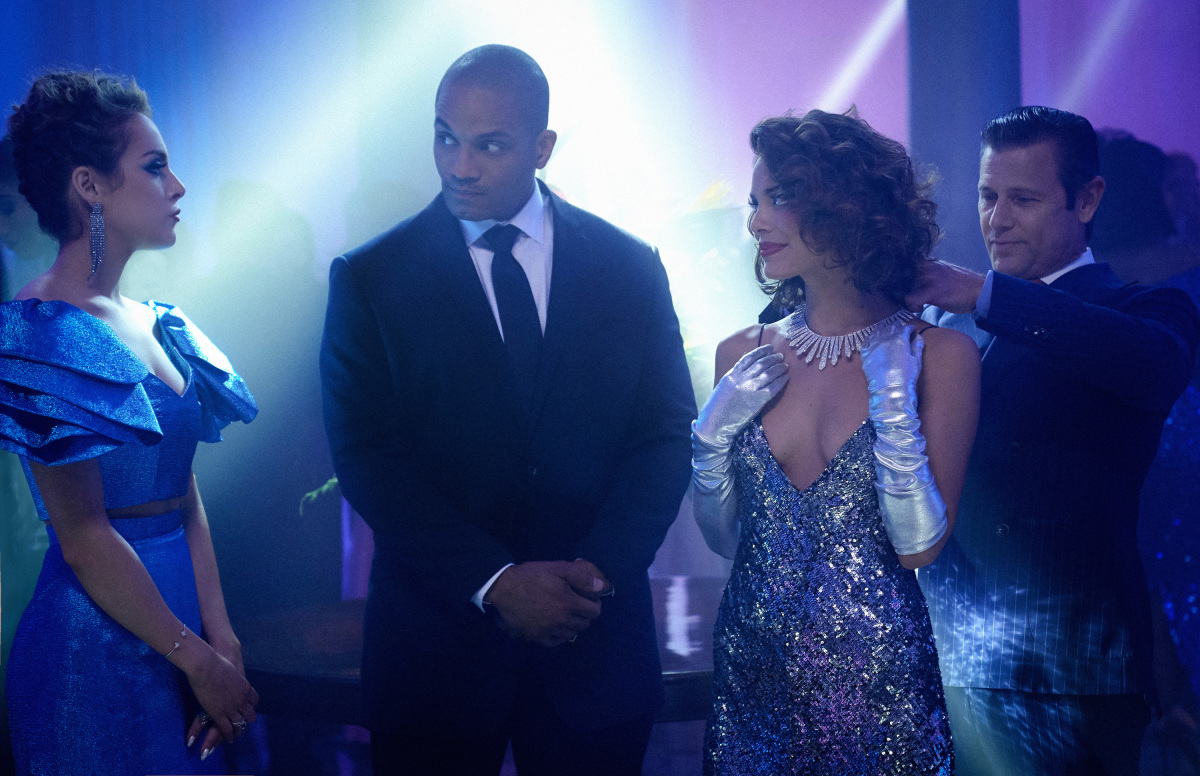 Dynasty continues to be pretty enjoyable, but could do with ramping up the campy outrageousness — this week, it felt a bit mellow, which is such a shame! It’s Dynasty, it’s on the CW, there’s no reason why this can’t be transcendently ridiculous and over the top. Instead, we get some fairly predictable drama that’s elevated a bit by the really great cast, but mostly… could be better. Could be weirder. Why on earth, if you have a show that can reach the heights of acceptable strangeness like Dynasty could, would you not reach for it?

After seeing Steven get arrested unexpectedly last week, we resolve this fairly quickly. Steven’s bailed out by his father, but after getting into a fight, Blake tells him that he’s not going to furnish Steven with lawyers — it’s up to Steven to get himself out of this mess. Apparently he had motive and means to commit the murder, but nobody seems to spend more than a half a second considering whether he could’ve actually done it. Instead of wondering about his guilt, we follow Steven as he tries to lock down an alibi for the night Matthew died. He tries Sammy, who refuses, saying that he has a criminal record, and he’d absolutely testify for Steven if he thought it would help more than hurt him. Steven takes this very calmly — and even praises Sammy for his honesty — which is weird, because if somebody I was romantically, or at least sexually, involved with was like, “hey, I have a record so bad that nobody would believe a word I said in court” I would have a lot of questions. 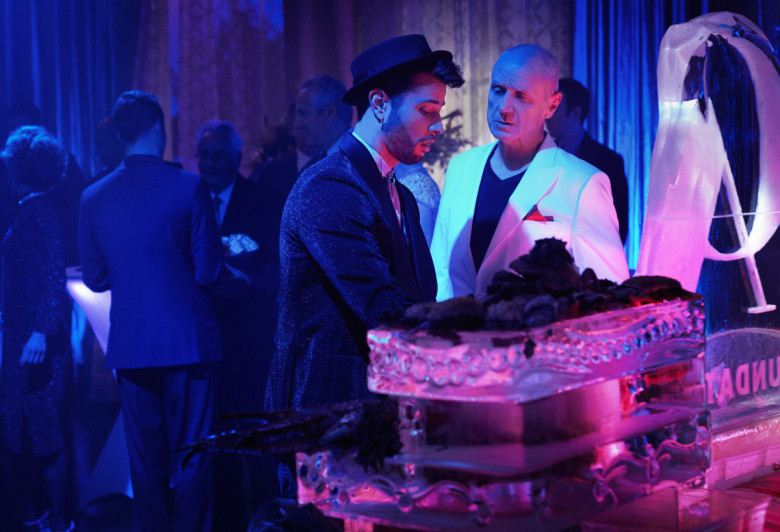 Steven also asks Michael for an alibi — at first it seemed like he’s trying to get Michael to lie, but of course Steven remains the chillest of the chill and takes it gracefully when Michael admits he doesn’t remember seeing Steven that night. We also find out that Michael and Steven are pretty good pals, and that Steven knows about Michael and Fallon. He claims Michael is like part of the family, so Steven would never screw him over by telling Blake — another place at which I’m like, what family loyalty, because it clearly doesn’t occur to Steven to keep the secret because, hi, Fallon’s his sister — but then when Michael gives him some intel on Blake, Steven turns around immediately to tell Blake he knows that Blake stole Matthew’s phone, making Blake a suspect once again. It doesn’t get tracked back to Michael in the episode, but it just seemed like a risky move — how many people would’ve been in a position to overhear that? This feels like something that will definitely come back to bite Michael in the ass later.

Sammy and Cristal get more family drama this episode. We get a few paltry flashbacks where we see Cristal fleeing Caracas, although it’s unclear whether she’s fleeing for political or personal reasons — but at least we now know that she was desperate while leaving Caracas, which makes her a little more sympathetic, to think that she had no choice but to hide her identity. It’s been weirdly unclear about her status as a gold digger, so it’s nice to get some clarity that, at least, if she is, it’s borne of desperation. When she fled, however, she left her sister, Sammy’s mother, behind.

Sammy comes to her and tells her that his mother is in trouble and needs money. Cristal’s finances, however, have been merged with Blake’s, and since Anders is out to get her, any large sum of money taken out of their joint account will definitely raise red flags. Sammy suggests they steal something, but Cristal refuses. Shockingly, the Carringtons are robbed later, and Cristal’s (insured) wedding ring is stolen. Sammy tells Cristal openly later that he arranged the robbery and will sell the ring to get the money for his mom. Cristal is trapped on both sides — Sammy manipulating her based on his knowledge of her past from one side, and Anders holding his knowledge over her head on the other. 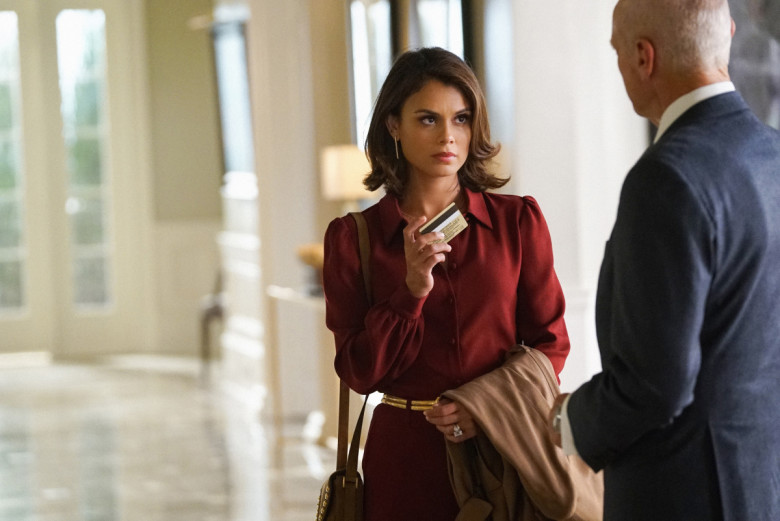 Meanwhile, Fallon tries to get her new business up and running. Blake throws up an immediate roadblock, sending Fallon and Colby a cease and desist for using the Carrington name. Michael is instrumental to Fallon’s growth here, encouraging her to stop living in her father’s shadow and letting him dictate her life, and making a name for herself. Unfortunately, while he’s helping her to this revelation, he’s also helping her to something else, wink wink, and Colby sees. Although he claimed he had no interest in Fallon earlier, Fallon has clearly been leveraging his attraction to her, so this will definitely lead to conflict at some point.

Business-wise, Fallon uses the 80s party her dad throws to poach some clients. Afterwards, she and Blake have a confrontation where Blake agrees to drop the cease and desist and let Fallon use his name, because she’s his daughter, and he’s proud of her, and so forth. Fallon accepts his more-or-less apology, but tells him that she’s going to make a name for herself instead of build on his.

The most confusing bit of characterization in the show, for me, is Blake. I can’t get a lock on him. He’s definitely selfish and manipulative, and many times seems more interested in his theoretical legacy than his actual children. But then we’re supposed to believe, based on last week’s episode, that he’s actually huge on family loyalty and would do anything to protect them. Even though he continually endangers Fallon’s career with his maneuvering, and has, up until this episode, not helped Steven work-wise at all. But his kids definitely do love him. And there’s a touching moment where Sammy tells Steven it’s obvious despite his extensive bullshit that Blake loves Steven. It also seems like Blake’s relationship with Cristal, though outrageously quick (I think at one point they say it’s only been four months!?), is genuine. Half of these things make me feel like I should like Blake, but then he does things that are categorical sociopathic villain territory. I just can’t tell if he’s a bad dude putting up a good front on occasion, or a good dude with some impulse control issues.

Whatever the case, this week on Dynasty was enjoyable, but slightly underwhelming. I’m really hoping that we’re just ramping up to some serious ridiculousness instead of this sort of half-hearted campiness.