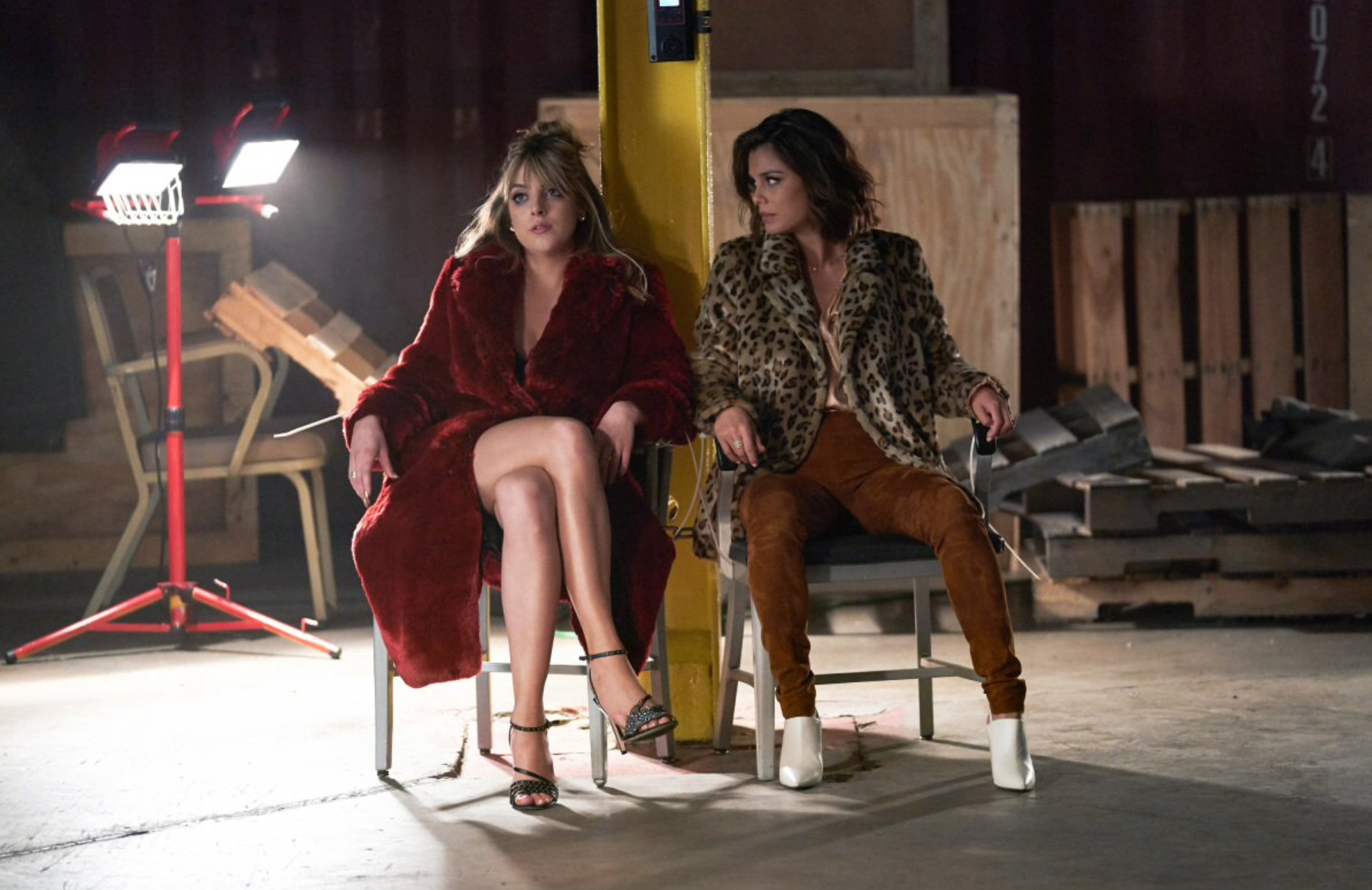 Dynasty continues to be over the top, which is exactly what it should be, so… it’s pretty great. I don’t love that this episode revolves around Fallon getting kidnapped, partly because Fallon has enough going on, and partly because I don’t really want anything based around a damsel in distress — it’s 2018, let’s move on, people. But there are a lot of good moments in this episode that redeem it from a slightly annoying premise.

Alejandro, Sammy Jo’s thought-to-be-murdered-by-Cristal father, with the help of Cristal’s Stockholm syndromes sister Iris, kidnap Fallon to ransom Blake for a cool fifteen mill. Unfortunately, Blake’s a hardened business dude and so basically laughs Alejandro off… which is when Fallon points out to Alejandro that she’s worth way more than that, so Alejandro calls back and asks for twenty-five. Doubly unfortunate, even if Blake wanted to give in to Alejandro’s demands, he doesn’t have that much liquid cash available. At the same time, he’s supposed to have dinner with the new head of police to try and foster the same relationship with her that he had with Stansfield. The dramatic irony here is that the head of police is Jeff Colby’s cousin, and so will be pretty hard for Blake to pocket. But that’s an issue for another time. The problem this week is that Blake can’t involve the police, and she’s coming to the mansion for dinner.

The Carringtons huddle up to try and figure out how best to extract Fallon. Blake is particularly hard lined with his opinions on how to handle it, and we’ll find out later it’s because before Steven and Fallon were born, they had a brother who was kidnapped, unsuccessfully ransomed, and never seen again. While it’s kind of a shoehorned, awkward explanation, it seems like this brother’s likely to reappear dramatically at some point. And that sounds SO fun, so… whatever.

Cristal decides to take things into her own hands, since it’s her family, and brings the money that they have been able to gather to rendezvous with Alejandro and Iris. She miscalculated, and instead of taking the money and giving Fallon back, Alejandro takes Cristal hostage as well. Cristal doesn’t even come prepared with a gun, and she knows that Alejandro is pretty dangerous, so honestly, serves her right for being a rash idiot. 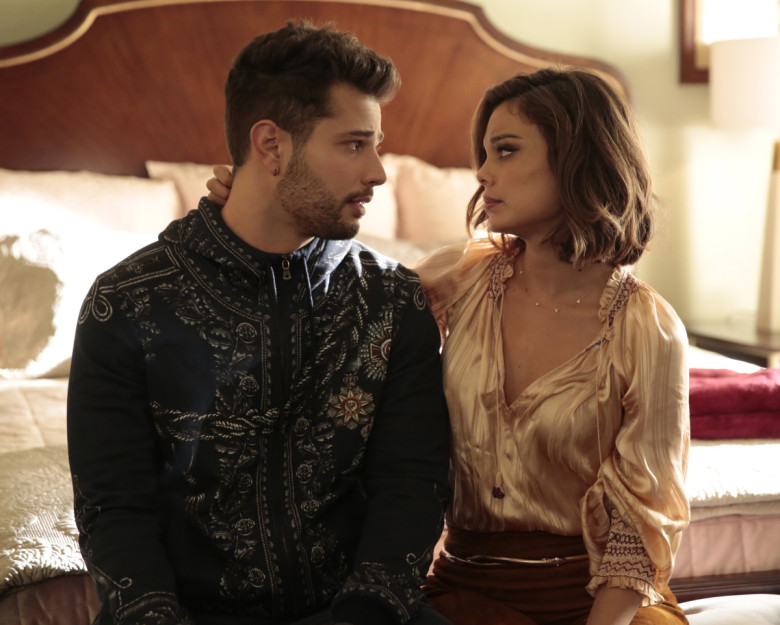 Parallel to this, Michael knows from driving Blake that Fallon has been idnapped and obviously wants to help. Jeff came over early to bring Blake what cash he had on hand to help, and worried about Jeff doing something that will jeopardize Fallon’’s life, Blake asks Michael to follow him and keep and eye on him. Michael pretends to strategize with Jeff, while he’s really just trying to stop Jeff from involving the police. But when Jeff questions, Michael’s allegiance to the Carringtons and lingering feelings for Fallon, they get into a tiff, set off by the most Dynasty line. Jeff tells Michael: “If you can’t let my girlfriend go, the least you could do is stop sleeping with my sister.”

There’s this shot where they’re facing off in Jeff’s office, and they’re immaculately backlit and glowing like actual angels — man, it’s so beautiful. Like, it helps that it’s a shot of two ridiculously good-looking men, but it’s beautiful on top of that, which is saying something. Michael slugs Jeff, and it is a brutal hit. You feel it, y’know? This scene is pretty straightforward and the conflict and power dynamics between them are likewise, but it’s also just really good. The dialogue is over the top but also perfectly in place, the directing is baller, and I want to write a personal love letter to whoever lit this thing. It ends with, bizarrely, Jeff offering Michael a job after they agree to see where the money ended up, since Jeff put a tracking device in the bag he left with Blake.

Meanwhile, in captivity, Fallon and Cristal get zip tied together. Although Fallon gets a slew of amazing one liners while she’s being held hostage, and at one point tries to turn Iris with some generic ”what’s a girl like you doing with a guy like this”, but she doesn’t really do anything to escape, which is the main thing I didn’t love about this episode. They give Fallon the best lines consistently, to be sure, but a lot of her supposed competence is super absent in her actual actions — I guess that’s maybe the point, that her self-importance is all money and bravado and she is actually not as smart as she thinks she is… But nobody around her treats her like that, and now Morrell seems to be doing well business-wise, so I just sort of need them to decide if Fallon is just some plucky heiress with a sharp tongue, or if she’s a shrewd business woman who happens to be an heiress.

Cristal manages to get Fallon free, and she runs to safety but Cristal doesn’t get out in time. Alejandro drives Cristal and Iris somewhere else, and on the way Cristal talks Iris into helping her. She tells Iris that Iris needs to help Cristal, if not for the sake of the sisterly bond that Cristal herself declared dead a couple weeks ago, then for Sammy’s sake. She ends up giving Iris a bit of a speech about how blood is really what matters, and. Alejandro will never e that. It’s a weird argument from a show that has, in the past few episodes, made a really compelling family out of the Carringtons, Anders, Cristal, and Sammy Jo — and obviously not all of them are related by blood. 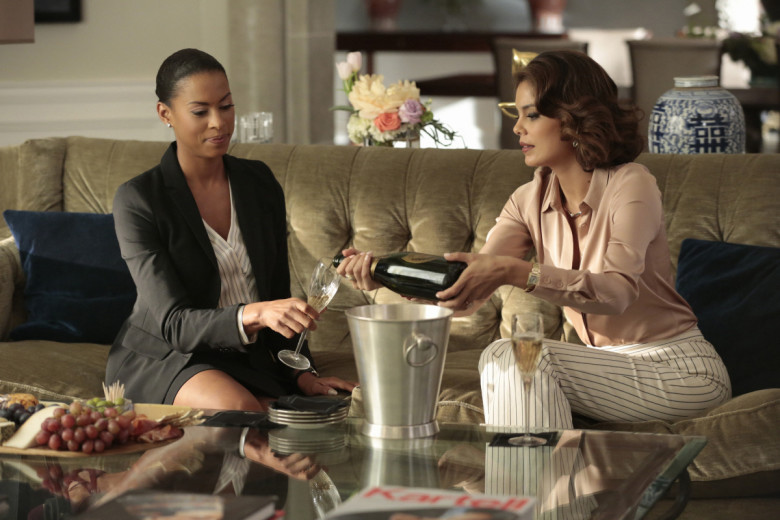 There’s a really jarring (in a good way) scene where Alejandro gets the upper hand and strangles Cristal. The lighting is also really good here, I don’t know — I don’t usually notice the visuals of Dynasty, but this week they were so strong. Iris comes in to save her, though, shooting Alejandro in the back. Cristal gives Iris some money, and she disappears into the woods on the run. When Cristal gets back to safety, she tells the police that shit was self defense, and she doesn’t know where Iris went, but she doesn’t expect to ever see her again.

The other plot line this episode is Steven moving out without the benefit of his connections and (presumably) trust fund to truly try and make it on his own. Fallon comes in to help him pack in the end, and they have a lovely conversation because they’re just so kind to each other, it’s a boon to watch. Separately, Sammy Jo tells Anders that he’s moving with Steven.

Michael confronts Jeff, pointing out all the things he’s noticed about Jeff — that he’s connected to the police chief, that he seems to be using Fallon. It’s great to see Michael being given some active plot to pursue rather than just sleeping with Fallon’s friends and enemies. Jeff hits a snag in his plan, however, when Fallon goes to him to tell him she wants to buy him out of the company, or wants him to buy her out because she realized she’s always getting help from one man or another — and also she’s dumping him. Which is really all I wanted out of any episode — Jeff to get screwed over for being a creepy monster — so I definitely ended this week happy.