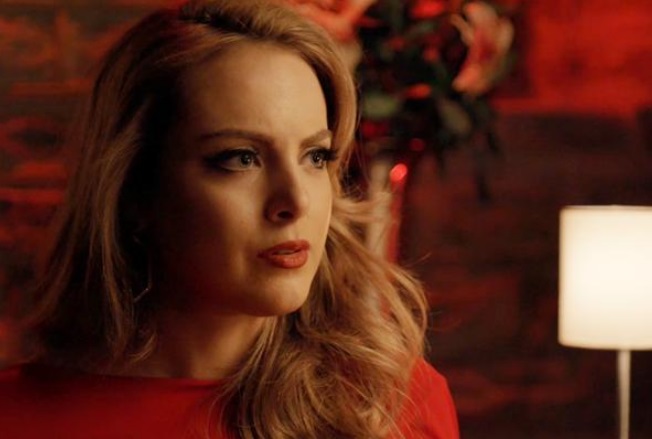 Last week, Steven announced his intention to get into politics, Blake and Cristal found themselves at moral and ethical odds, and Fallon fell back into Jeff’s crosshairs. This week furthered all of those issues and spun them out into even deeper drama, which I’m pretty into it. Most, if not all, of the plot going forward seems to revolve around some messed up romantic relationships, which is fine and fun, don’t get me wrong, but I hope they introduce some greater business-related or otherwise external conflict so it doesn’t just lean on that.

Steven, with his difficult past and earnest streak, ends up being a pretty able candidate. With Cristal’s help, he gets an interview where he nimbly navigates difficult questions about his privilege and his past drug addiction — the interview is done by Cristal’s journalist friend who almost outed Blake for bribing a judge last week. The journalist, Rick, is an old flame of Cristal who’s clearly still interested, and Cristal appears more than a little interested herself. Since she and Blake haven’t been seeing eye to eye given Blake’s level of total chill when it comes to committing felonies and supporting morally reprehensible politicians to further his business interests, this is definitely a bad time for Cristal to reconnect with Rick. After Steven’s killer interview, which even Blake admits he’s proud of, Cristal thanks Rick for doing the interview, and then makes out with him. Cheating on Blake while in his house (their house, I guess, but still), while he’s potentially home, after involving his son with the guy she’s cheating on him with is some next level pettiness. But Cristal has form on the affair front, so this isn’t a huge departure for her. 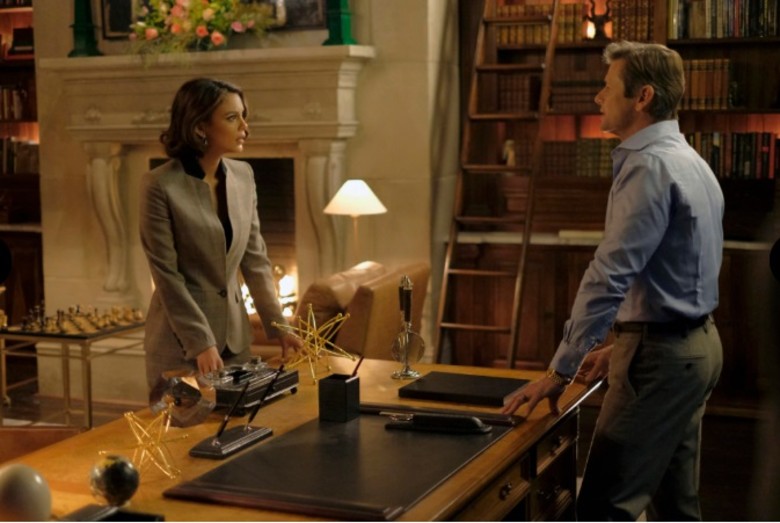 Fallon, meanwhile, has reunited with Monica, and the two decide to go on a girl’s night. Monica, however, is working with Jeff to try and bring the Carringtons down, and plans to use their night out to convince Fallon to give Jeff another chance. She tells Fallon that Jeff’s been in love with her for years, and that he bought her a ring, and his intention to sell off his shares of Morrell to her was only because of his feelings for her. Fallon appears to buy the act hook, line, and sinker — but she also bought the club she and Monica are in for Monica, who apparently has always wanted to run her own club. The club has sentimental value for them, and was closing, so Fallon bought it for her as a gift. It makes Monica’s betrayal sting a little bit more, that Fallon is actually trying to be a good friend who listens to her friend’s interests and dreams.

Michael, meanwhile, is now convinced that Jeff is up to no good, although he hasn’t quite cracked Monica’s involvement yet. Fallon catches Sam, now her assistant, snooping through Jeff’s computer on Michael’s orders for some evidence that he’s not on the level. Fallon confronts Michael about it, and Michael admits that he’s not doing it because he’s jealous of Jeff — he’s doing it because he loves Fallon, and he doesn’t want her to get hurt. Ugh. Michael is just the best, guys. The best.

Fallon goes to Jeff to talk to him about what Monica told her, and Jeff proposes, telling Fallon she can think about it as long as she needs. I guess that’s nice, but since they dated for literally no time at all it seems totally insane that Jeff proposed at all. Like, I don’t get how Fallon isn’t like, “clearly this is part of some larger ploy because you proposing to me right now is completely insane.” At the very least Jeff could’ve made some speech about how they’re a good match and made it some weird upper class pseudo-arranged marriage of powerful people to make it at least a specific kind of weird. Fallon takes the ring and thinks on it.

At the same time, Jeff and Monica’s dad is up for parole, but right before his hearing a guy gets stabbed in jail and says that their dad, Cecil, did it. It’s clearly something Blake staged to keep Cecil locked up — Rick, the journalist, tips Cristal off to Blake’s involvement, and Blake maintains that Cecil tried to kill him for an imagined tryst with his wife. The Colbys, obviously, maintain that Blake did have an affair with the wife, and Blake framed Cecil to get him out of the way. Since the existence of Blake’s moral code seems to change depending on the week, it’s hard to guess which side is telling the truth. Jeff, however, out maneuvers Blake and bribes the commissioner so that his father is released on parole anyway, presenting a new threat to the Carringtons, although his release is likely to destabilize the Colbys as well. 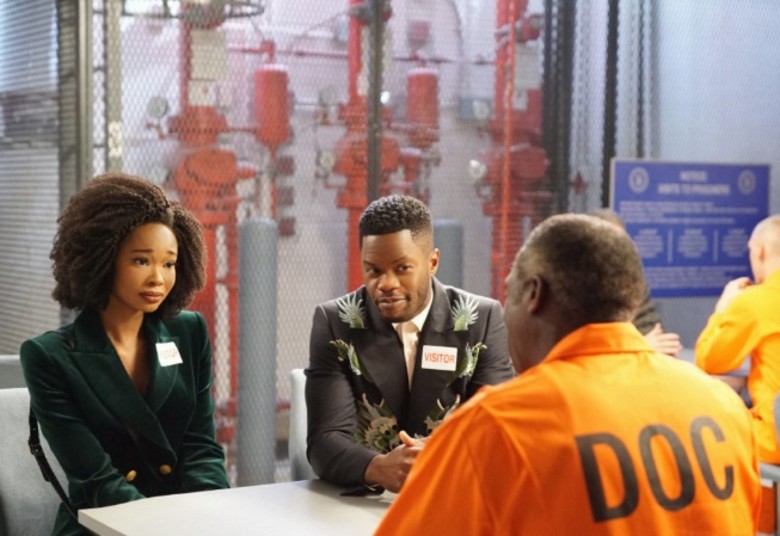 Fallon goes back to Jeff and accepts his proposal, and reader, my head exploded. Luckily, she immediately goes to Michael after and plays him a recording of Jeff’s voicemail where Monica tells him she was successful in manipulating Fallon into giving him a second chance, though she feels badly lying to Fallon. Fallon got the messages when Sam unsuccessfully tried to forward the office phones to Fallon’s cell phone — it’s a convenient technological mix-up, but it does the job.

Now both Fallon knows for sure that the Colbys are playing her, and Michael knows Monica is complicit. Fallon intends to find out exactly why her best friend and business partner are trying to screw her over, and clearly Michael’s going to help, because again, he’s just the best. I’m not super keen for Michael to use Monica and their romantic relationship to get to the bottom of everything, so I hope he maintains his status as the best and dumps her to avoid the complication, but somehow I think we’re going to end up in some truly weird and oddly fascinating situation where Fallon is with Jeff to get more information and Michael is with Monica to get more information, and then inevitably, Michael and Fallon will get together in secret again so — Dynasty is promising some pretty ridiculous drama, and I’m all in for it.