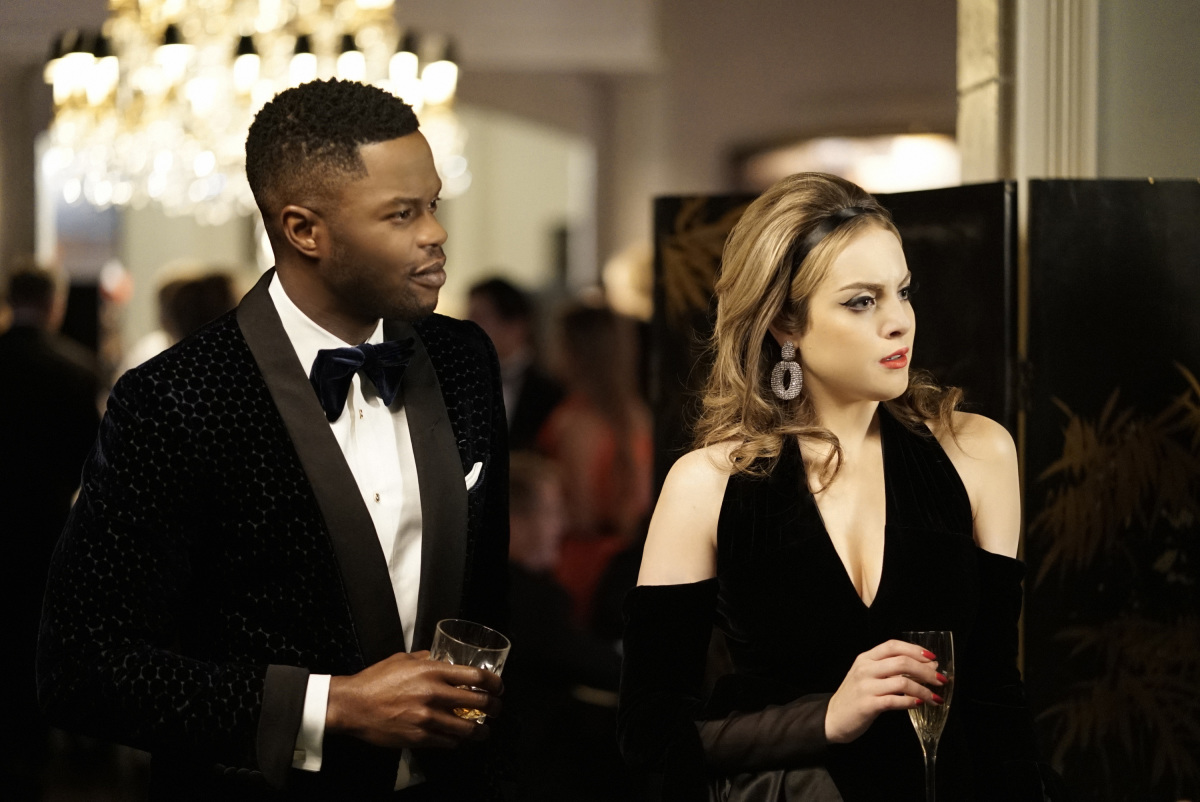 I love Dynasty. It is exactly my kind of show — lots of talking, kind of campy, centered around a Mean Girl — and so I feel like that’s a necessary caveat to all of these reviews. I was never not going to love Dynasty. It was just a matter of time. This week, Cristal finds out that Blake might not be the moral paragon she sometimes thinks he is and he’s sometimes made out to be — I still have a lot of questions about Blake’s characterization at all points. The whole episode pivots around a poker night fundraiser Blake is hosting for Senator Daniels. Cristal is approached by an implied former fling and colleague who recalls her as moral and all for doing good about the fact that he’s about to go out with a story about people bribing Daniels when he was a judge, including Blake.

Cristal goes to Blake immediately to ask, and Blake reveals that he bribed Daniels when he and Alexis (Fallon and Steven’s mother) were going to court over custody. Unwilling to publicly air Alexis’s dirty laundry and hurt Fallon and Steven in the process, bribing the judge was the only thing he could think to do to ensure he got custody. Cristal is sympathetic, and goes back to her friend to tell him what happened and that he shouldn’t run the story. He accuses her of being corrupt, which, yes. Absolutely.

At the same time, Cristal meets the Senator’s wife, who warns her not to lose sight of herself in pursuit of marital bliss with a powerful, wealthy man. Cristal tries to say she hasn’t been compromised in any way, but the Senator’s wife tells Cristal that part of Daniels’ political stance will now include a Trump-esque “build the wall” anti-immigration speech, and she’s surprised Cristal is okay with that. Cristal is, uh, definitely not okay with that.

Fallon goes to Monica to try and make up. She even apologizes, which is a big deal for Fallon, but Monica turns her down, citing the fact that Fallon wants a therapist more than she wants a friend. It’s a fair criticism, even if I do feel a bit badly for Fallon.

Jeff, meanwhile, petitions Monica to make up with Fallon so that Monica can convince Fallon to give Jeff another shot. Jeff reveals that the Carringtons are behind their fathers imprisonment, and their mothers suicide as a result of what Blake put her through, which is actually the important clarification — the Carringtons didn’t do anything to their family, Blake did. This brings me back to what on earth is the deal with Blake?

I don’t know if it’s intentionally confusing or if I just want him to be more black and white than he needs to be, or if it’s a conflict of the actor seeming super earnest at all times and the character being shady as all get out, but I am so confused by how we seem to make a case for him as a reasonably decent human being one minute and then immediately flip to “no, he’s a cartoon villain CEO.” Like, fine, but it’s just weird.

Monica tells Jeff she’s not going to use Fallon to get back at Blake, and she’s angry that Jeff didn’t tell her what was really going on earlier. Michael later invites Monica to the Carrington’s fundraiser, which will put her on a collision course with Fallon one way or another.

Fallon manages to insult the guy Morrell needs to approve their new rent contract for where they keep their… energy… stuff, and so he tells them they need to double their offer, which they can’t do. Not being able to renew the deal could ruin Morrell, and so Fallon invites the guy, who she knows to be a big poker player, to the Casino Night party.

At the party, Cristal talks to the Senator’s wife more, and learns that not only is the Senator having multiple affairs, but Blake often pays for Daniels and his woman of choice to go on vacation — as the wife puts it, bribes are much harder to trace when they’re not a check with “bribe” written in the memo. Cristal confronts Blake about the fact that he lied to her face, and does in fact bribe political officials, which in addition to being icky, is a felony that could ruin the company if found out. Blake tries to compare his felonies with Cristal hiding her family issues from him which is a wild comparison, since Cristal was hiding her past for fear of her life, and Blake was just casually lying to his wife about the fact that he actively supports political corruption. Okay, Blake. 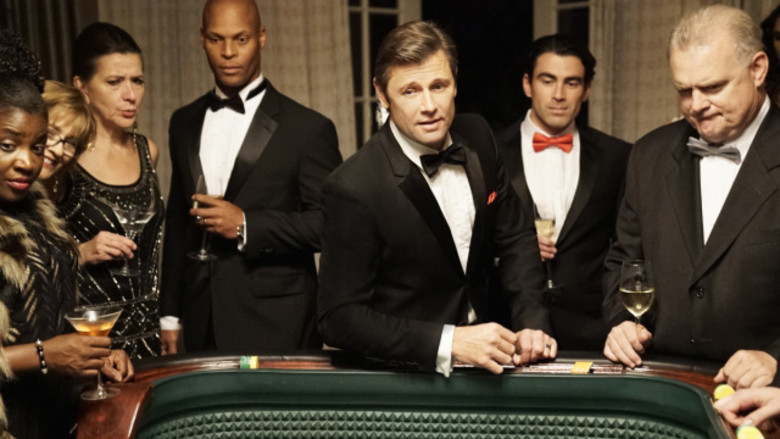 Sammy Jo and Steven also attend the party, having been living in their own apartment. Steven’s joy at having gotten a job for himself is dimmed when Blake acknowledges that he knows Steven’s new boss, and so it was definitely Steven’s name that landed him the job, regardless of his qualifications. When Senator Daniels goes to Steven and makes a pitch to get his vote and gives a pretty cartoonish but unfortunately fairly believable speech an old, conservative political would give a young, idealistic millennial, Steven and Sammy Jo leave the party.

Meanwhile, Fallon is trying to convince the guy she offended to give them their fair rent. He admits that it wasn’t Fallon generally being a bitch that made him raise the rate, but the fact that he got another offer for double, and so for it to be worth it to him, Morrell needs to offer the same. Instead of upping her offer, Fallon challenges him to a poker game — their fair rental rate for a night with Fallon. She writes the deal on a napkin and has the guy sign, and it’s… appalling, but very Fallon, and I can’t get over what a gift Elizabeth Gillies is. Her delivery is impeccable, and makes even Fallon’s most absurd gambits seem reasonable — within the Dynasty paradigm, obviously.

Monica over hears what Fallon is doing and tries to stop her, but in doing she manages to tip Fallon off to what the guy has in his hand. Fallon ends up winning by out bluffing him, and trying to raise him when she has nothing to a $1 rate for Morrell if she wins, and a weekend in Vegas with her if she loses. He folds, and Fallon gets what she wants.

She goes to thank Monica for her help, and they seem to make up. Afterwards, Jeff thanks Monica for mending things with Fallon, and she slaps him… but as we find out later, it was all for show. She know Michael was watching and is suspicious of Jeff, but she’s definitely in on Jeff’s plan. It’s weird to me, because although I totally believe Fallon is a horrible friend and totally support Monica if she doesn’t want to associate with her anymore, it’s a whole other thing to punish Fallon — and not just professionally, but personally, since Jeff’s plan requires him to marry her — for Blake’s sins. Fallon is greedy and selfish and sometimes nasty, but she’s not like… a horrible person, and she didn’t do anything to Jeff or Monica, other than be a kind of shitty friend. That doesn’t merit the kind of abuse they’re planning to put her through. I love Fallon, and so this whole thing is really upsetting to me.

That said, there’s also something really interesting and satisfying about the Colbys, who have been torn apart by this shitty, greedy family and were pacified with scholarships and other gifts meant to keep them from complaining about or really noticing the fact that Blake totally blew up their lives going after the Carringtons and bringing them down. Much as I love Fallon and really hate her personal life being used instead of just professional, that’s a narrative I could get behind. But I also have a hard time imagining the Colbys succeeding here. 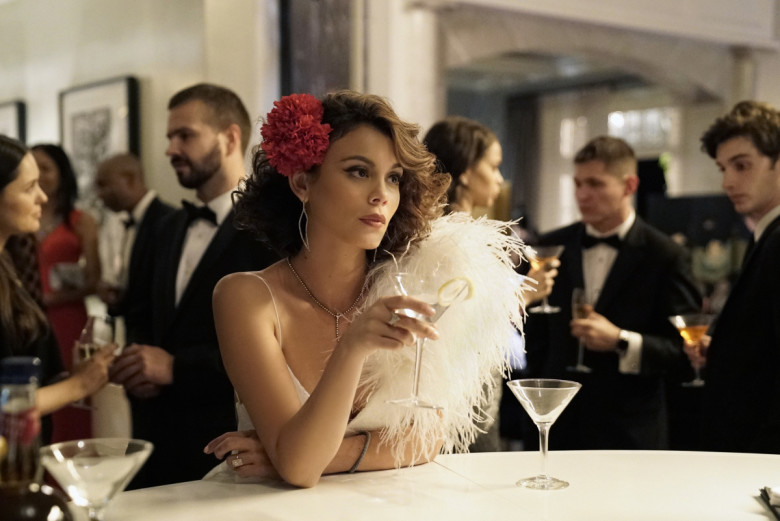 Cristal uses the knowledge that the Senator is having affairs to give her journalist pal a story that will take him down without taking Blake out in the process, so she’s clearly decided that she’s going to protect him — but she also accomplishes her own goal, in taking down a corrupt, horrible, conservative Senator. Along the same lines, Steven reveals to Fallon and Sammy that he was inspired by the Senator to run for office himself, which promises to be interesting. In the same scene, Fallon hires Sammy to be her personal assistant which promises to be a nightmare for everybody involved.

The whole episode is a mixed bag, but it’s also so fun and I’m so into it. What can y’do.