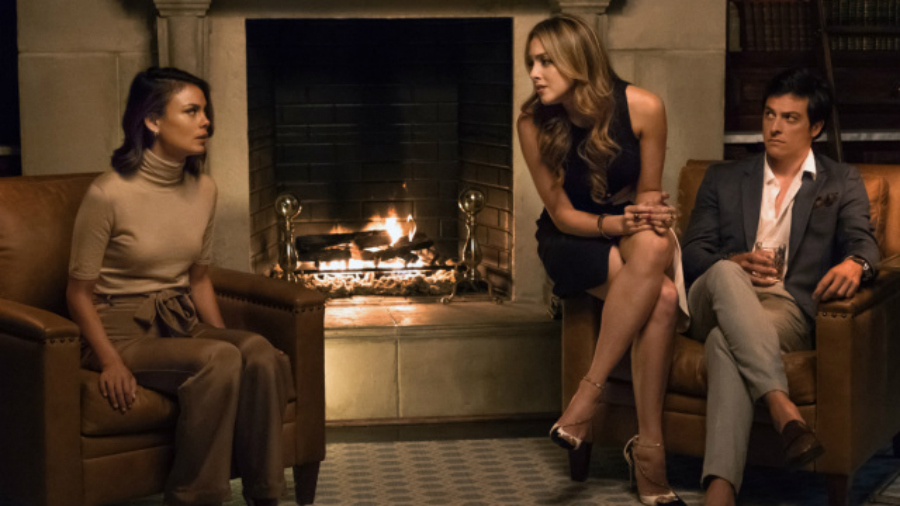 Here’s the thing about Dynasty so far. I love it, but it has an issue showing the things it’s telling. This entire episode appears to revolve around doing anything to protect the family, but from the beginning, we’ve been presented with a deeply divided Carrington front. Fallon and Cristal hate each other. Fallon and Steven are close but aren’t necessarily on the same page at any point. Blake is close with Cristal but they’re also low key at war now that he knows she had an affair and she knows he possibly killed the man she loved. Blake and Fallon are high key at war. Blake and Steven were never even nearly close. So every time there’s a dramatic line about how you do anything for family or how family is business, it’s really confusing, because not only is this family wildly divided personally, but none of them work together except for Blake and Cristal (also, can we talk about how shady it is to promote your new wife right as you’re getting married? Why is nobody at Carrington Atlantic like, “yo, Blake, you can’t give your wife a promotion as a wedding gift, that’s so unethical, oh my god.”)

Despite that, there are good things. Really interesting characters who could be even better if the show figures out how to make the plot fit into their vision of what is should be. Really great, campy actors who just do the most with every word. Like, really, Elizabeth Gillies is an absolute gift — so all of this criticism comes with the caveat that I have full faith in Dynasty to find its way.

This week is basically a murder mystery. Matthew is dead, and the police and the family are trying to figure out what the cause is. Obviously, Blake is a suspect, having offered Matthew a position in China to get him away from Cristal which Matthew turned down just before Blake sent him on the assignment that killed him. Cristal has to hide all evidence of their romance because now that she’s married into a massive amount of money in a mere four months, her maybe-maybe-not-ex dying suspiciously while working for the company Cristal has just been promoted seems like a convenient cover-up. Fallon has to erase all evidence of the photo she had her hot chauffeur take of Cristal and Michael because she and her business partner, Jeff Colby, were trying to buy Windbrier as well, and Matthew’s death would be a convenient way to both cause trouble for her father and drive the price down.

Steven doesn’t have a motive. Sadly, poor Steven doesn’t seem to have a lot going on other than having sex with his stepmother’s nephew, but he’s very entertaining, so we’ll forgive him.

In the wake of this tragedy, there’s a lot of that “protect the family” nonsense I mentioned in the first paragraph. I’m super here for crazy, manipulative families who go at each other with teeth and claws but defend one another just as viciously, but we just haven’t been given any indication that these people care about one another yet. Hopefully, it’ll come with time, but I need to see some loyalty here, not just be told it exists.

Blake gives Matthew’s widow, Claudia, a ton of money, claiming it’s what he would’ve given Matthew for taking the post in China anyway, and so she should have it. This is obviously some kind of payoff to get Claudia and Matthew’s partner, Willie, to leave him the eff alone in all of these investigations, but Blake sells it, and Claudia accepts it — she’s sick, after all, and $500,000 is hard for anyone to turn down. The most brutal part of that scene, and another tic in the “how am I supposed to believe any of you care about one another” column, is that Blake offers Claudia a bag of Matthew’s things, which he claims Matthew left in his office. In reality, the bag is full of Matthew’s things indeed — but they’re from Cristal’s stash, which Blake made her give up. It’s an incredibly cruel move, and Cristal calls Blake out.

I need some clarity on their relationship going forward. Actually, I really just need some clarity about Cristal. We tease that she’s not who she says she is relentless. Between her cousin Sam — staying at the house and also sleeping with Steven — and his vague mentions and the butler constantly warning her that he knows everything about her, we know she has some shady history. We know she probably doesn’t come from money. But while she and Blake do seem into each other at points (there’ve been two episodes and two rip each other’s clothes off scenes), I really don’t know if Cristal is a gold digger to any extent, or if this is a real romance. We learn in this episode she and Blake have only been together for four months — that throws up some serious red flags. But nothing’s confirmed or explicitly given, although we do learn at the end that Cristal’s name isn’t Cristal Flores.

The ultimate twist, however, answering none of the above questions but introducing a ton and a half more, is the final arrest. After everybody spends the episode running around trying to erase any and all connections to Matthew that would make him look like anything but the average Carrington Atlantic employee (although this is undermined by the fact that Blake hosts the wake and the whole family attends the funeral — guys this is weird behavior, you look suspicious AF), there is an arrest made at the end after all.

Remember what I said earlier, about Steven not having a whole lot going on but being endearing and sleeping with Sam? Apparently, that impression was intentional, because, at the end of this episode, he’s the one who’s lead away in handcuffs.

It feels more probable to me that Steven was involved in something completely separate from Matthew’s murder that leads to his arrest — but then the timing is very convenient. So I’m definitely hooked for next week, to find out if this twist has legs or if it was just thrown out for shock value. Either way, despite some flaws in plotting and pacing and establishing these relationships, I would die for Fallon Carrington, so I’m excited to keep watching.