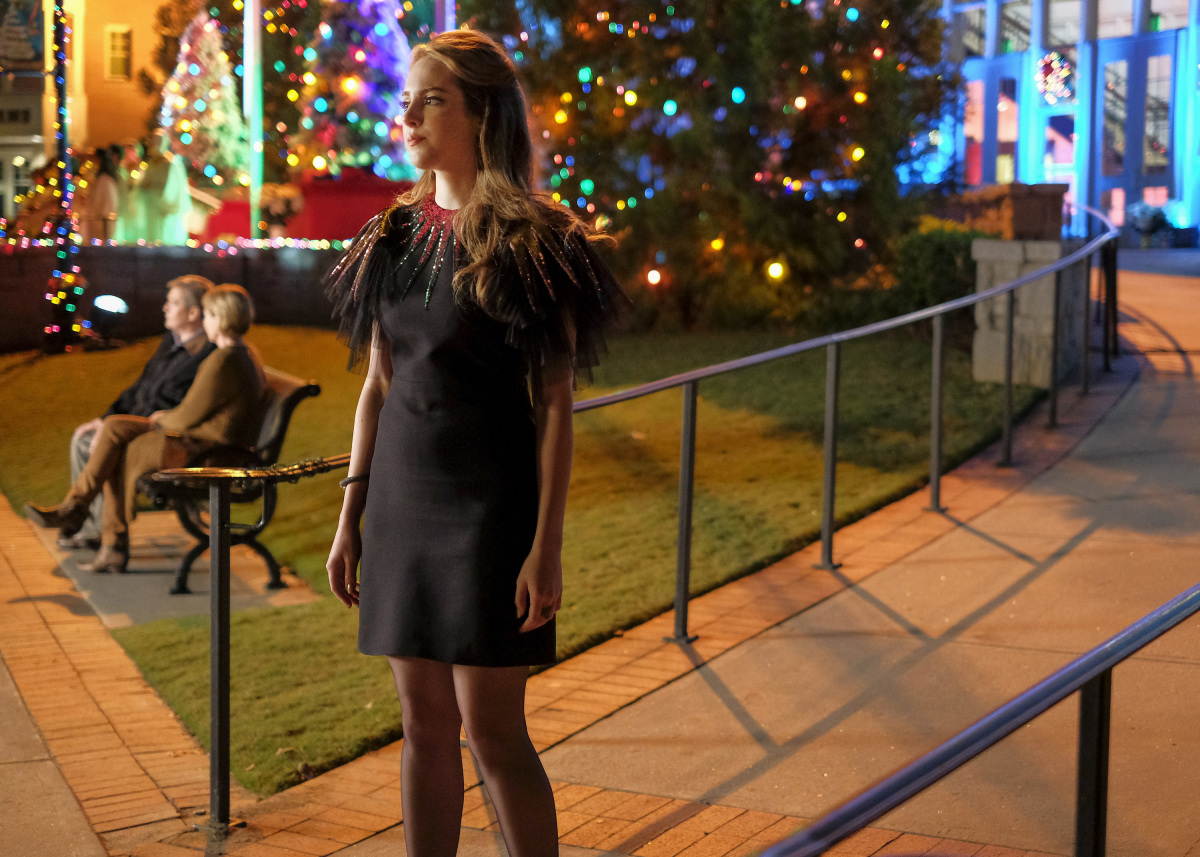 This week was Christmas on Dynasty, so we’re just burnin’ through the holidays here. While Thanksgiving marked the Carringtons and company coming together a bit, Christmas is all about division. Fallon’s love life becomes a love triangle(ish), Steven gets in over his head trying to morally right Carrington Atlantic — but actually, the only two who come together are Cristal and Anders, after Anders agrees to help Cristal with the problem of her past coming to collect.

So, let’s start there, I guess. We finally get the whole story — Cristal got pregnant when she was in Venezuela and living with her sister and her sister’s significant other, who was very displeased at the thought of having to provide not just for a sister, but a baby. Cristal had a miscarriage in the skirmish following that argument, and her resultant need of medical care was what made she and her sister so desperate to leave Venezuela that they stole money. The people they stole from are now after Cristal for it, presumably after seeing her all over the news. This didn’t really occur to me I think until this episode, but how nuts is it that somebody who fled their home country with a bunch of stolen money and whose sister we learn has been moving around a lot to stay in hiding from these people, allows herself to be all over the news like Cristal does? The course of true love never did run smooth, or whatever, but you’d think she’d at least have the good sense not to get involved with a seriously public figure like Blake, and not to become one herself as the COO of Carrington Atlantic.

Cristal’s either a total moron, or they’re making up her backstory as they go along, or… I don’t know. I’m all for ridiculous soapy drama, but I need that drama to ride on the backs of good, solid characters, and Cristal makes less sense to me each week. Fallon’s a hot mess, but at least I can get a hold of her. 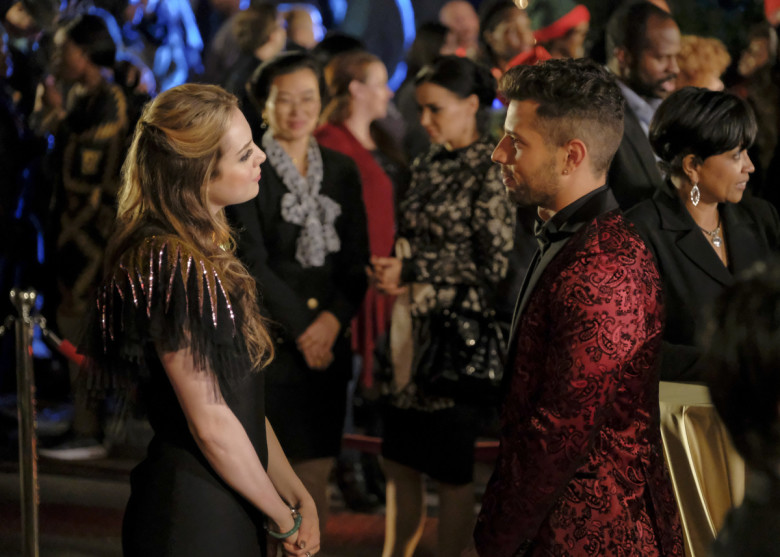 Anyway, Anders agrees to help Cristal pay these people off, and to accompany her. He’s also agreed previously to keep the secrets of her past… but we find his line in this episode, too. Cristal and Blake had decided to try for a baby, but we find out this episode that Cristal has, and intends to keep, her IUD. Blake then has Anders set Cristal an appointment with the family doctor to talk about whatever people intending to conceive do, and so Cristal’s medical records are sent over, and Anders finds out about her contraceptive device. Again, all for soapy drama — but on what planet do doctors disclose medical advice to a butler? Am I crazy? Is this a thing that happens? Cristal definitely should’ve just told Blake she wasn’t ready, but there were other ways to have Blake find out about the IUD than this weirdly chatty doctor. Like, Cristal could sue. This is nonsense.

But Anders’ line is that he’ll protect the secrets of Cristal’s past, but he won’t help her if her lies negatively impact Blake’s future. So he tells Blake, who confronts Cristal, who admits to Blake the whole story, and says the miscarriage is what makes her so gun-shy about starting a family. He’s kind and understanding, and tells Anders to look for Cristal’s sister to bring her to the US. But also, it seems, so that he and Anders can ascertain how much truth there is in Cristal’s story.

Steven, meanwhile, spends the episode trying to bring Stansfield down. Unfortunately, Steven is a sweet lil cupcake capable of taking exactly no one down, and Stansfield tramples him into the ground; he tells Steven that Stansfield has a sort of mutually assured destruction deal with the Carringtons, because Stansfield covered up a mistake Steven made while working for Carrington Atlantic that lead to a guy getting killed, per Blake’s request. Steven, moral compass of the family, obviously finds this news hard to swallow. He was working with Jeff Colby to bring Stansfield down, but tells Jeff they’re going to lay off after hearing this.

Jeff, however, has other plans, as he usually does. He goes to Stansfield and offers him money and a house in Jamaica for Stansfield to instate Colby’s cousin in his stead and leave the force. I imagine Colby’s planning on using his cousin much in the same way that Blake uses Stansfield, but Colby also gives Stansfield a rousing speech about how disappointing it is to see another black man in power use his powers for evil, basically. It’s a good moment for Colby.

What isn’t a good moment for Colby, is the fact that he’s super into Fallon, and Fallon spends the whole episode struggling with the loss of Michael. Michael impresses upon Fallon his need for distance from her, but she keeps pushing boundaries, trying to befriend Kori, and assuming that they’re going to the tree lighting together like they always have. Fallon goes with Colby instead after realizing that Michael won’t go with her, and takes Colby up to a balcony over looking the tree lighting ceremony. Unfortunately, Michael’s also there, hooking up with Kori.

This really bothers Fallon, because she says that this was their spot, and is really offended that Michael would bring another woman there. Fallon throws their clothes over the balcony and locks them up there… though she comes around later and sends somebody up to help them. Colby realizes that Fallon went with him, intentionally or not, to replace Michael, and admits his feelings to her before storming off. 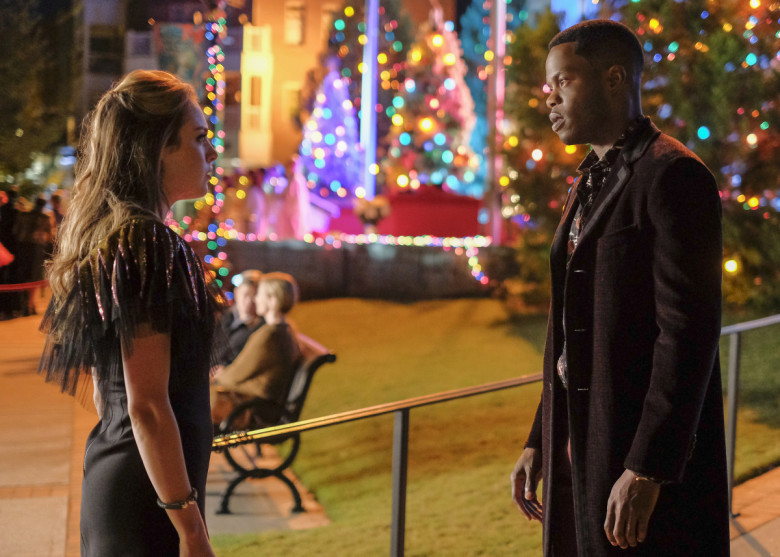 Kori later breaks it off with Michael due to his lingering Fallon problem. It’s a little silly to me that they don’t just get back together, since Fallon seems to have realized that she does have actual feelings for Michael, and the implication multiple times has been that if she’d known Michael wanted a relationship, that would’ve been on the table. And Michael has admitted to still having feelings for Fallon, both to her, and to Kori, which Fallon heard secondhand. Again, I’m here for the drama, and this isn’t necessarily a complaint, but this is all soooooo middle school. For an aggressive to a fault go-getter, Fallon is being aggressively passive on this front.

On the Colby front, however, Fallon decides to be aggressive. They end up agreeing to a sort of rebound, friends-with-benefits arrangement, which seems like a bad idea all around. Not only are they running a company together, but Fallon’s totally into somebody else on top of being emotional unavailable on a whole, and Colby’s totally into Fallon in a very not casual way.

Lastly, Sammy spent this episode actually doing something for once. Realizing he needs to find a way to actually become part of the family lest his free ride disappear, he starts trying to play Fallon and Blake off of each other as Morrell and Carrington Atlantic vie for the best corporate Christmas gift. He finds out what Fallon is trying to get — the new Google Pixel, sweet product placement, guys — and calls in himself, snatching the gifts out from under her… or so he thinks. Really, Fallon just had them change the “to” address, so that her gifts are sent to Sammy, and Sammy passes out gifts from Morrell without knowing it. Fallon is, however, impressed by Sammy’s ingenuity, and offers to show him a few things.

Next week it looks like we’ll get Cristal’s sister — I’m sure there are lots of things to look forward to there, but mostly I’m excited to see how Fallon reacts to Cristal’s whole secret backstory.