If you had any doubts that the midseason finale of EMPIRE would deliver, you lost. In arguably the best episode of the season (I feel like I’ve said that a lot this year), Empire manages to throw a plethora of curveballs and campy moments that just make you fall in love with the show. It’s hard to pinpoint exactly what makes Empire so good. It’s not a show anyone really takes seriously, but that doesn’t mean it’s anything less than primetime viewing. The dynamics within the Lyon family has only gotten more complicated, but the show is carried by one simple truth: Cookie always wins, but Lucious wins more.

The episode opens with Angelo leading a rally in Queens. Most shows that take place in New York like to “make New York a character of the show.” It’s a pretentious statement that happens too often because New York is aesthetically amazing. Empire has got to be the least New York show that supposedly takes place in New York. But nonetheless every few episodes we are reminded that we’re supposed to be in the Big Apple; specifically, in this episode, Queens. Angelo DuBois is too fancy of a name and too posh of a man to connect to the people of Queens (kind of a read on Queens – it’s a great place!) so Cookie steps in and does it for him. Cookie speaking at the rally – later dubbed as the “Cookie Effect,” is a major positive on the DuBois campaign for city mayor. So when Cookie announces at a rally that they’re changing the stuffy “Captain’s Ball” to the “People’s Ball” and making it a block party, everyone but Angelo’s mom is pleased.

Diana DuBois does not like Cookie. She would want nothing more than to see Angelo and her breakup, which brings Diana to Lucious, who also can’t stand the idea of Cookie with Angelo. They are both powerful, bad people and so when they meet at a local carnival and talk business on a Ferris Wheel, it’s nothing short of amazing. The bargain is struck between them, Lucious will get rid of a reporter with some dirt on Angelo and Diana will make sure that Cookie and Angelo breakup. I think it’s important to take note of how Lucious sums up their meeting, “This is the history of America, rich people like you asking me to do the things that you don’t have the courage to do.” Diana doesn’t seem to agree.

Remember Tariq? Lucious’ half-brother now FBI agent determined to bring Lucious to justice. Well it seems the reason Shyne took video of Freda Gatz singing last episode is in order to send it to Tariq. You see, Shyne has been playing rat for Tariq, dropping him tidbits of information that should help him persecute Lucious – or at the very least freeze his assets. And freeze Lucious’ assets he does. With Empire unable to pay the bills, Shyne finds himself in a great position. You see, if Shyne liquidates some of his assets, he can ensure that Empire is bankrolled. The only thing he wants in return is a stake in Empire Records. Lucious is hesitant to give it to him, but desperate times do often call for desperate measures, and so just like that Shyne becomes a legit member of Empire Records.

Hakeem is kind of a no-show this episode, but Jamal and Andre really take the spotlight. Diana was so enthralled with Jamal’s singing ability at the dinner party Cookie threw a few episodes ago, that she was determined to have Jamal perform at the Captain’s Ball. Now that it’s the People’s Ball and being produced by Cookie, it’s even more of the kickstart to Jamal’s career that he needs. But in order to get on the lineup Cookie demands that he’s sober. After pulling together all the pills he has from various parts of his house, she flushes them all down the sink. Everyone is worried Jamal is an addict, everyone except himself. When Cookie shows up at Jamal’s house the day of the People’s Ball to find him puking his guts out from withdrawal, she’s forced with a choice. Jamal swears to her he’s not an addict, he just needs a couple pills and he’ll be better. So Cookie undoes the plumbing to retrieve the pills (remember, her father was a plumber) and Jamal is good to go. He performs the hell out of the song, the first time performing since he was shot, and it goes better than expected. When he’s done he goes backstage to find happy friends and family bringing constructive news. He needs to go to rehab, right now, whether he wants to or not. He doesn’t necessarily go kicking and screaming, but I wouldn’t say he’s happy about it.

Tariq is pissed at Shyne for bankrolling Empire, when Shyne informs Tariq that he’s been played. Shyne wasn’t in it to put Lucious behind bars, he was in it to take a cut of the Empire pie, and thanks to Tariq, that’s now not only possible, but a reality of the situation. With Lucious kept in the dark, the only one who’s able to connect the pieces is Andre, and that dude is crazy. 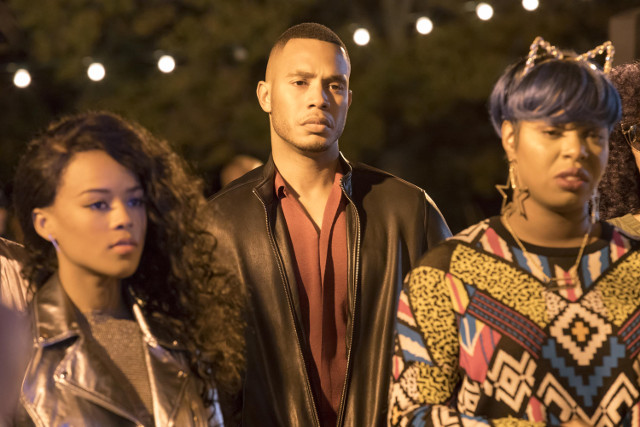 Nessa comes home one day to find Andre in the fetal position. He informs her that he’s bipolar (but also, it’s more that, he’s crazy) and that his wife would take care of him. Nessa says she’s not going to do that, she’s instead going to teach him how to take care of himself and be by his side, always. Like most Oakland Raiders fans, Nessa may glorify bad boys, but she’s a great person at heart. And it would be a wonderful scene, if Andre didn’t then imagine his dead All Lives Matter wife siting on the couch and judging him. He’s got to come to terms with her, and so he heads down to the beach where the two of them, him and his ghost wife, agree to call it quits. All the ghost wife asks of him is to make her proud and to kill Anika. She also refers to Andre as the most “ruthless” of the Lyon brothers. For whatever reason, this really seems to resonate with him.

Due to the “Cookie Effect” Diana plays Lucious. Instead of breaking the two of them up, she’s forced to keep them together, because Angelo becoming mayor by any means necessary means much more to her. Because of that, in classic Lucious flair, he also betrays Diana, and lures Cookie, Angelo and her to the carnival where Angelo is greeted by Lucious and the reporter, Cruz. Cruz asks Angelo to comment on the DUI he received when he was 17 that killed a young female passenger, Cookie is taken aback, Diana is horrified and Lucious walks along the boardwalk, smiling to himself before whimsically letting go a bouquet of balloons into the night sky. 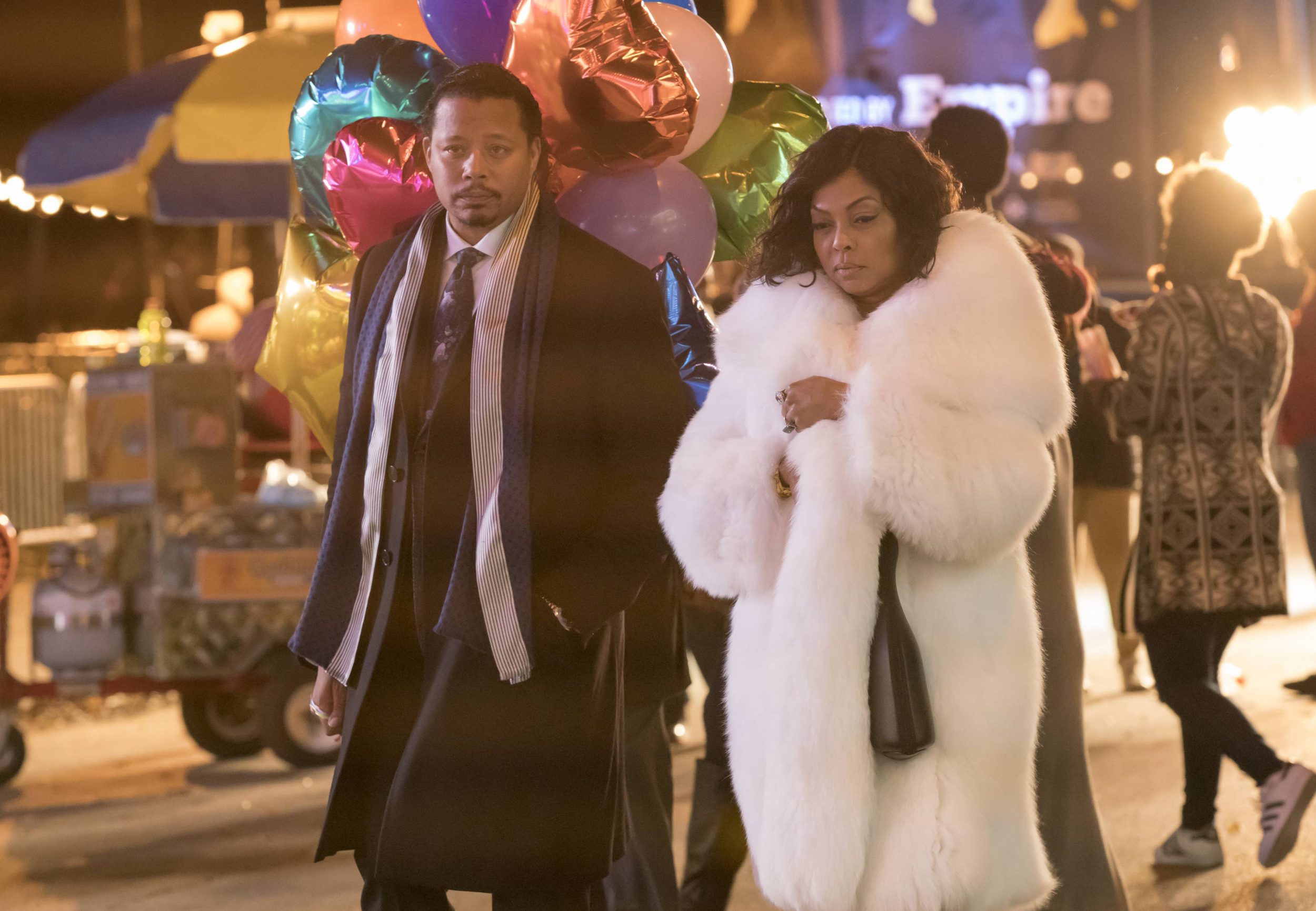 Andre visits Shyne, who’s turning Empire Records into a strip joint. Andre delivers his speech like he’s Denzel in Malcolm X, laying the ground work for Shyne. Shyne is somewhat receptive to it, and then Andre drops the hammer. He wants the two of them to kill Lucious Lyon. You can already see how this is going to play out. Either Andre is fooling Shyne, setting him up after finding out that he’s a rat, or he’s going to try to kill Lucious and end up killing Anika, the person he should’ve (if you ever should kill someone) killed a long time ago.

Although Empire leaves us for a time, it is leaving us on a good note. I’m excited to see what’s next from this show and what will come out of the Lyon family trials.