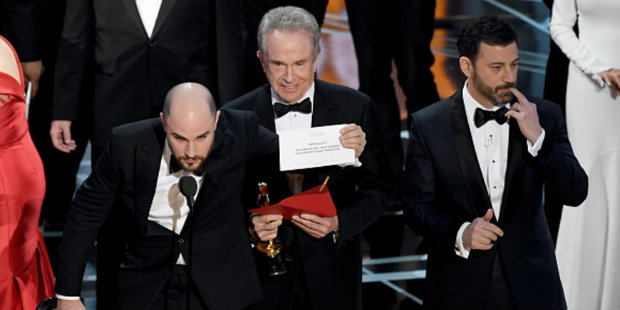 Update 7:30 p.m.: PricewaterhouseCoopers has issued a second apology in the wake of last night’s Oscar fiasco, taking full responsibility for the monumental mistake.

“PwC takes full responsibility for the series of mistakes and breaches of established protocols during last night’s Oscars. PwC partner Brian Cullinan mistakenly handed the back-up envelope for Actress in a Leading Role instead of the envelope for Best Picture to presenters Warren Beatty and Faye Dunaway. Once the error occurred, protocols for correcting it were not followed through quickly enough by Mr. Cullinan or his partner. We are deeply sorry for the disappointment suffered by the cast and crew of La La Land and Moonlight.

We sincerely apologize to Warren Beatty, Faye Dunaway, Jimmy Kimmel, ABC, and the Academy, none of whom was at fault for last night’s errors. We wish to extend our deepest gratitude to each of them for the graciousness they displayed during such a difficult moment. For the past 83 years, the Academy has entrusted PwC with the integrity of the awards process during the ceremony, and last night we failed the Academy.”

Not to be outdone, the Academy issued its own statement, essentially saying that the organization is launching a review of the entire backstage process, especially the way PwC oversees the revelation of the final results.

“We deeply regret the mistakes that were made during the presentation of the Best Picture category during last night’s Oscar ceremony. We apologize to the entire cast and crew of La La Land and Moonlight whose experience was profoundly altered by this error. We salute the tremendous grace they displayed under the circumstances. To all involved — including our presenters Warren Beatty and Faye Dunaway, the filmmakers, and our fans watching worldwide — we apologize.

For the last 83 years, the Academy has entrusted PwC to handle the critical tabulation process, including the accurate delivery of results. PwC has taken full responsibility for the breaches of established protocols that took place during the ceremony. We have spent last night and today investigating the circumstances, and will determine what actions are appropriate going forward. We are unwaveringly committed to upholding the integrity of the Oscars and the Academy of Motion Picture Arts and Sciences.”

The original story is below:

It has been a rough 24 hours for accounting firm PricewaterhouseCoopers in the wake of its epic blunder at the 89th Academy Awards, where La La Land was initially declared the Best Picture winner before the team from Moonlight took their rightful place onstage at the Dolby Theatre.

For the past 83 years, PwC has been responsible for the Oscar voting process, from counting the ballots to securing the envelopes leading up to and during the ceremony, and handing the correct winners to presenters.

In the immediate aftermath of the La La Land fiasco, the company released a statement apologizing for its careless mistake, which made headlines around the world.

“We sincerely apologize to Moonlight, La La Land, Warren Beatty, Faye Dunaway, and Oscar viewers for the error that was made during the award announcement for Best Picture. The presenters had mistakenly been given the wrong category envelope and when discovered, was immediately corrected. We are currently investigating how this could have happened, and deeply regret that this occurred. We appreciate the grace with which the nominees, the Academy, ABC, and Jimmy Kimmel handled the situation.”

But what exactly was “the situation?” There was a lot of confusion amid the chaos onstage, but here’s what actually went down.

PwC creates two identical sets of envelopes — one for each side of the Oscar stage — that are kept in a briefcase held by PwC partners Martha L. Ruiz and Brian Cullinan. When Emma Stone won Best Actress, presenter Leonardo DiCaprio received that award’s envelope from Ruiz. That is the same envelope that Stone was holding when the big blunder occurred.

Presenters Warren Beatty and Faye Dunaway entered from the opposite side of the stage and were given the wrong envelope by Cullinan — the other Best Actress envelope trumpeting Stone’s win. When Beatty opened the envelope, viewers could tell something was amiss, but they weren’t sure if the Bonnie & Clyde star was just milking the moment, or if he was genuinely confused.

Sensing there was a problem, Beatty deferred to Dunaway and allowed her to read off the wrong winner, bringing the La La Land team to the stage. Panic quickly set in amongst the PwC duo.

When Cullinan and Ruiz realized the snafu, they quickly notified the stage manager, but what were they supposed to do? Stop the show? That’s really up to producers Michael De Luca and Jennifer Todd, who were notably absent from the fracas. Two minutes elapsed while the Oscars’ brain trust figured out what to do, and how to do it.

That left La La Land producer Jordan Horowitz to break the news inside the Dolby and to the millions watching around the world.

It was an epic reversal that will go down not just in Oscar history, but in PricewaterhouseCoopers history as well. After decades of safeguarding the voting process, PwC made its first mistake — something the company attributed to human error. The once-trusted brand may take a hit to its otherwise sterling reputation, as outlined here by the New York Times, but the incident served as a much-needed reminder that beneath all the fancy tuxedos and sparkling diamond necklaces, we’re all just human beings who make the occasional mistake.

PwC’s U.S. chairman and senior partner Tim Ryan told Variety that he spoke to Cullinan about the incident at length and that Cullinan feels “very, very terrible and horrible. He is very upset about this mistake. And it is also my mistake, our mistake and we all feel very bad.”

Believe it or not, this isn’t even the first time the wrong winner was announced at the Oscars. Sammy Davis Jr. claimed he was given the wrong envelope in 1964 while presenting Best Music Score, but that mistake was corrected before the wrong winner gave his acceptance speech, and the moment certainly wasn’t as big as last night’s Best Picture showdown.

As for whether PwC will return next year, the Academy may want to reconsider its options, since Ernst & Young is probably holding on Line 2.