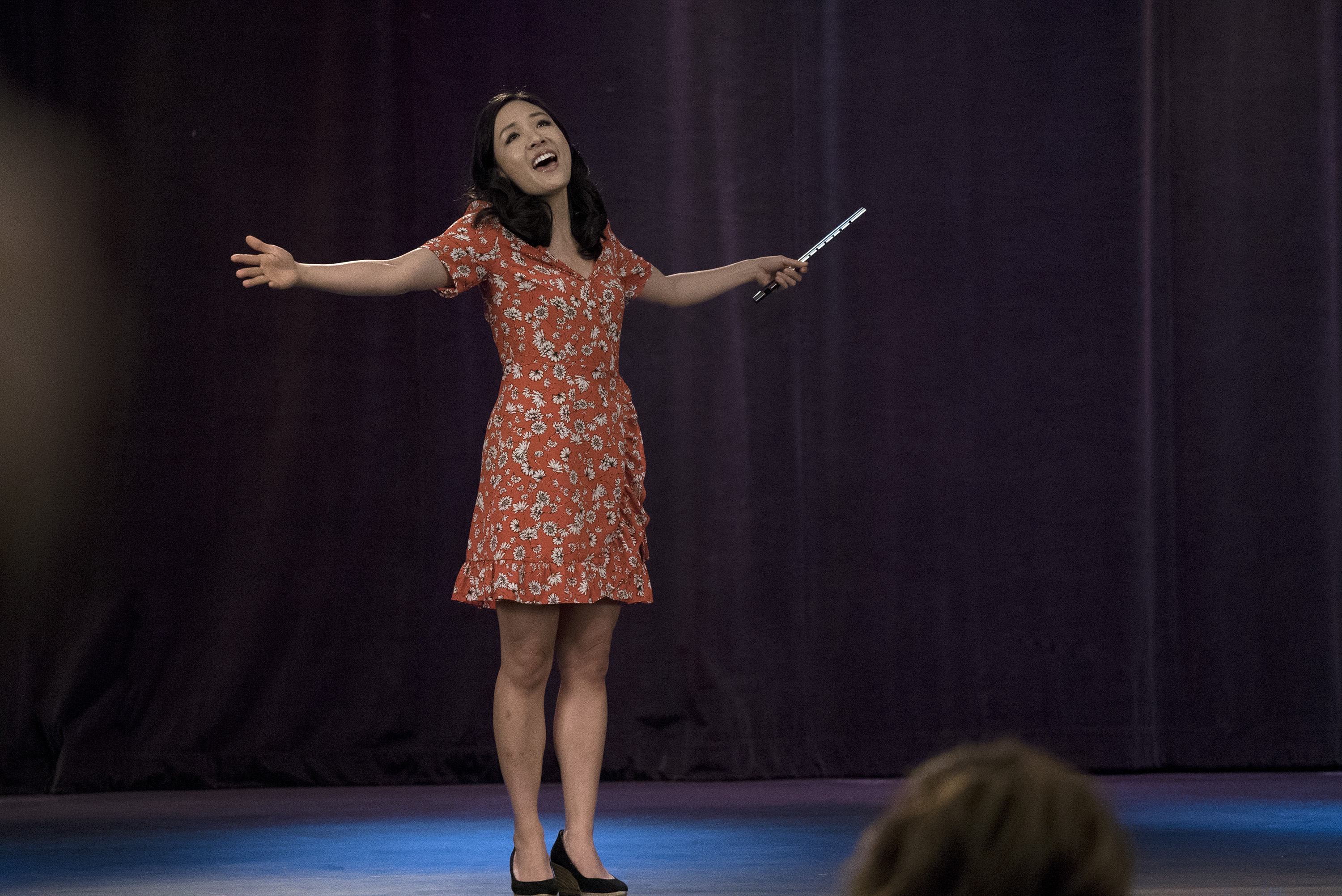 Christmas 1997. I remember it. The weekend before the big holiday my cousin took me to see Titanic (it’s opening weekend). I remember the theatre being half full on a Saturday night. I remember the rumors surrounding it about it being a disaster. I remember my cousin getting nervous when a very naked Kate Winslet appeared on screen for my very young eyes. To be honest I don’t think there has been full frontal nudity of that kind in a PG-13 major blockbuster since. Well, it’s Christmas ’97 on Fresh of the Boat, where Cline Dion would rule the airwaves and Titanic fever would sweep the world for the next four months.

I remember going to school that Monday and telling everyone about the film. Little did my young mind knew at the time just how big this movie would become in a short amount of time. And it has swept up Louis (Randall Park) and Honey (Chelsey Crisp). In what is the most useless plotline on this show, Marvin (Ray Wise) thinks Honey is stepping out on him. Why? Honey and Louis have no one to go see the film with and end up seeing the movie together multiple times. Marvin even approaches Louis about his suspicions. Louis feeling guilty, doesn’t say anything.

Marvin decides to stake out every theatre in Orlando to confirm his suspicions. Marvin catches Honey watching the movie in a disguise with Louis dressed as Lao Ban Santa (Marvin mistakes him for a woman). Upon seeing his best friend and wife seeing Titanic, Marvin puts aside his fear of watching a ship go down in public. He figures since his best friend and wife come together for a movie, it can’t be all bad. Well, Marvin is a nautical man and hates the inaccuracies. However, Marvin finds a gift labeled “Big Daddy” in the garage and confronts Marvin. Honey tells Marvin that was supposed to be his Christmas gift. It’s a framed photo of a sonogram. Honey is pregnant.

Titanic isn’t the only love story though. Eddie (Hudson Yang) is helping Nicole (Luna Blaise) land a girl she really likes who works at a coffee shop. Nicole and Eddie spend all day at the shop eventually roping in Emery (Forrest Wheeler) and Alison (Isabelle Alexander). To hang out in the coffee shop the four teens must order coffee which too much caffeine starts to take its toll on the four. With every cup, the girl makes her feelings for Nicole clearer with each cup. As the group finally comes up with something written on a cup. It’s misguided but hilarious “What up girl, you gay? You play any instruments? Holla back at me.”. When Nicole goes to hand the cup over, she wisely throws it out. Alison spots on the cup a phone number and the group cheers on Nicole with Eddie giving her a big hug.

Titanic continues in the episode’s A-plot which again revolves around Jessica’s (Constance Wu) selfish arrogance. Look there’s only so many times they can do this story of Jessica learning a lesson in humility. I know you guys are sick of seeing me write this over and over. Trust me, I’m sick of writing about it. I am even more tired of watching this time and again. Truth be told, I really don’t know why they make any of these other characters the main focus. Constance Wu kills it week after week, but she’s giving nothing to work with truth be told. Jessica was the breakout character of the first season. With the departure of the real Eddie Huang as narrator after the first season, the show restructured to focus more on Louis and Jessica with a heavy emphasis on Jessica.

Jessica has her model holiday town built and it’s perfect. With every aspect of her life, she wants full control of the caroling committee. Holly (Paula Abdul) has really taken this to the next level as she puts together a coordinated dance to go along with the singing. Jessica is pleased. Holly says it’s a challenge working with so many people to which Jessica demands Holly make cuts after holding auditions. Evan (Ian Chen) kills his audition performing “Total Eclipse of the Heart” (snickers) and Jessica goes on after giving her performance of Titanic’s theme song as originally sung by Celine Dion, “My Heart Will Go On”. During this performance, we’re treated to one of the funniest montages I’ve ever seen as we see all the other plot lines intercut with Jessica’s singing. 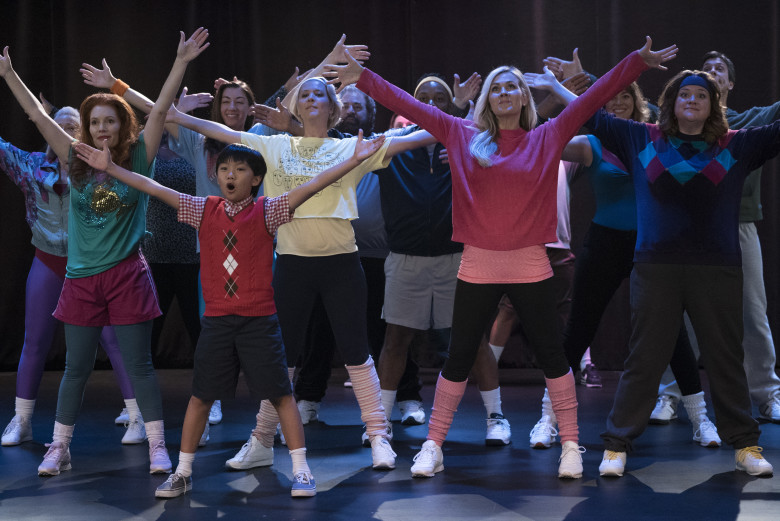 Holly has cut Jessica from the team due to her bad attitude. She cites how too much negative energy can kill a group like the band Oasis (Plantain Supernova > Champagne Supernova). Evan goes off to rehearsals as Jessica is left behind to admire her Christmas model town. On the actual night when it’s time to do the caroling, they are crashed by Jessica. Asking why is she there and if Holly knows, Jessica tells the group that she fired her. The group is disgusted as they learn they learn that Jessica took Evan’s advice to heart about showing Holly how much she loves Christmas. However, Jessica realized she outranks her and fired her saying who is she to have her kicked out the group as it’s her committee. As everyone leaves, Jessica tells Evan they can do it together. Evan then tells Jessica she has no Christmas spirit.

Jessica goes to Honey for counseling. Honey tells Jessica that she is a great mother and she’ll make it up somehow to Evan. Jessica gives Evan a model orphanage he wanted in the model town with Jessica realizing that Christmas is not supposed to be perfect, but everyone happy. Evan accepts her apology. Jessica then goes to Holly and apologies to her as well. The whole neighborhood gathers together and sings Christmas carols.

So yeah, not a great episode, but not a bad episode. This season continues to wallow in mediocrity as nothing is being done with these characters outside of Nicole’s sexuality and Honey’s baby on the way. As for all of you asking why would I want to see a three-hour love story as a young child, Well I went to a birthday party at a theatre. It was the special edition of Return of the Jedi. I remember seeing this poster in the lobby and it struck me. All I knew was it was a historical event on a massive scale with a troubled production. Even as a child, I liked the movie and it still holds up (my last viewing of it being a press screening of the film in 3D. Only the second time I’ve seen it in a theatre). If there’s one thing this show excels at, it’s making me reminisce about what I can and can’t remember about the nineties.