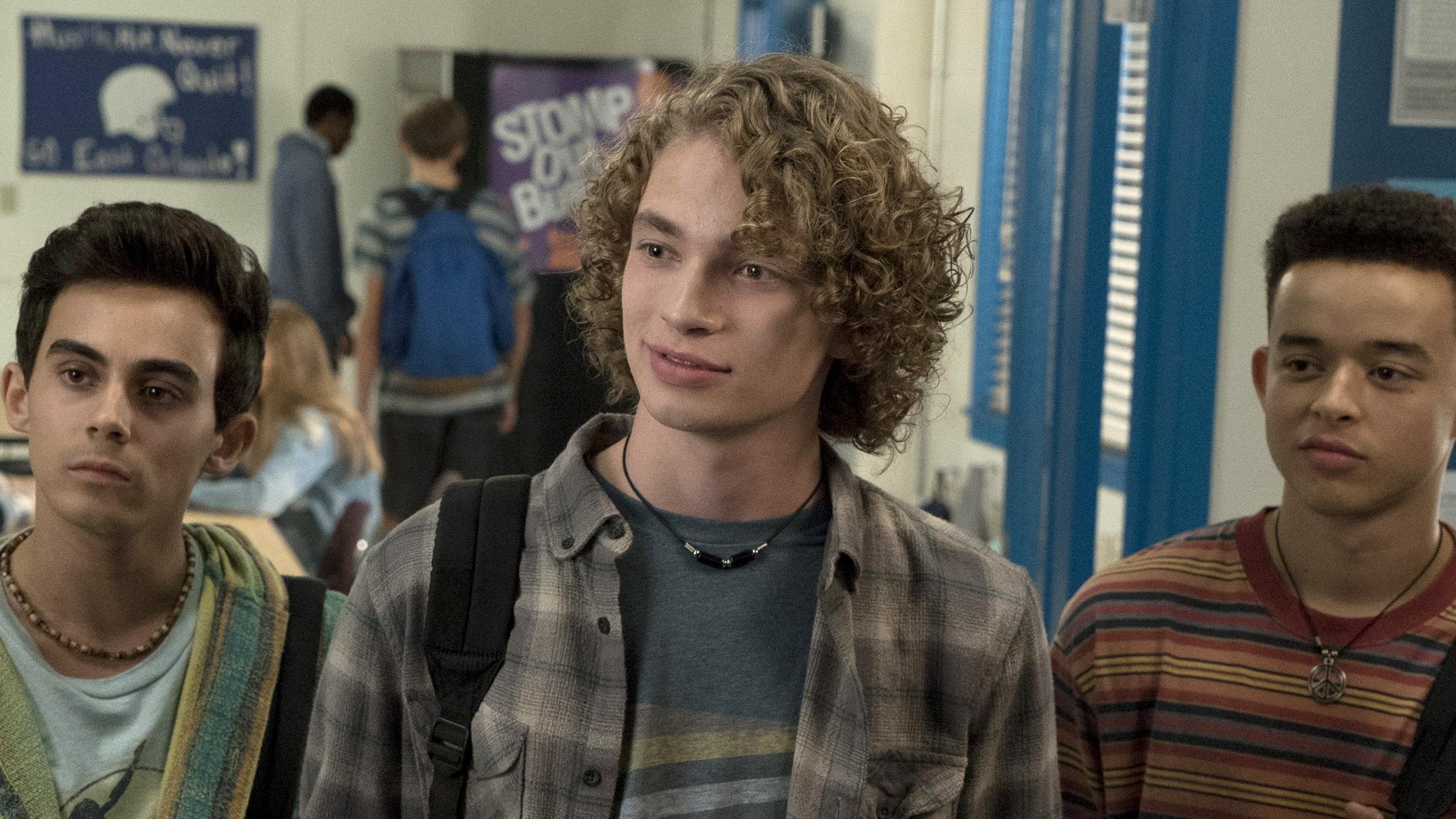 What has happened to FRESH OFF THE BOAT? It seems to have lost its voice. What was once a half hour comedy about the Asian experience in nineties America is now just another lifeless sitcom? Seriously, tell me the difference between this and say Full House? Seemingly going through the motions week after week with bare basic storylines carrying through the season(s), we pick-up with Jessica (Constance Wu) trying to choose the proper photo for her book and Eddie (Hudson Yang) coming to terms with the new status quo in his click.

With Brain (Dash Williams) joining cheerleading, Dave (Evan Hannemann) joining the school musical, Walter (Prophet Bolden) joining the book club, and Trent (Trevor Larcom) now the part of the safety patrol, Eddie is embarrassed by his friends’ choices of joining the various school clubs. Trent, in particular, is taking his job with the safety patrol way too seriously. 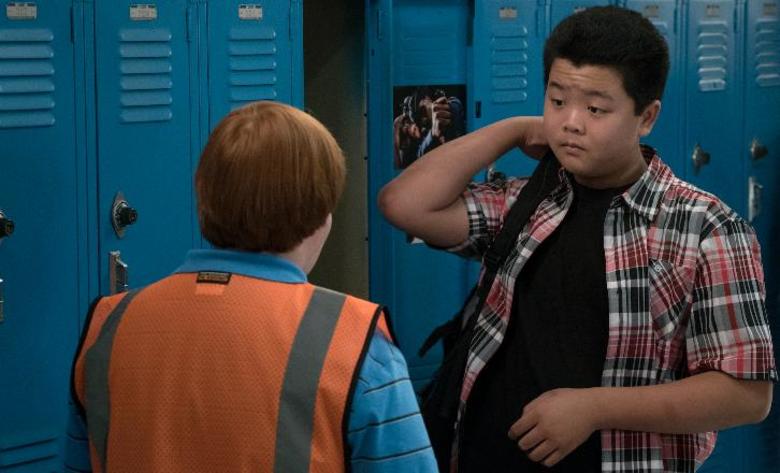 The group of friends all conspire to put Trent in his place with all of them wearing slides (flip-flop sandals) with socks. However, they all confirm what Louis (Randall Park) had said about the group. They’re good boys. With this being Eddie’s second citation, Trent issues him Saturday detention. At Saturday detention Eddie impresses the hacky sack kids by falling asleep as soon as the teacher told them not to sleep. On Monday, his friends ask him how detention was which infuriates Eddie further. And with the hacky sack kids impressed with Eddie’s blatant disregard for the rules, he takes up there offer to join their group for lunch.

Eddie is surprised to find however that the kids sneak off to Taco Fiesta for lunch. At the restaurant, Eddie impresses his new group further by pulling a classic move we all do which is ask for a cup of water and then gets a soda from the soda fountain. The boys are all highly impressed and tell Eddie they weren’t sure about him because of Trent. Wanting payback Eddie hatches a scheme with the hacky sack kids to get their bean bag sacks back.

Eddie has the combo number for Trent’s locker as Trent entrusted it to him (come on Trent. You should’ve known better). In his locker is the keys to the principal’s office. The boys use the keys to get their sacks back like nothing happened in and out. Everything goes according to plan until the boys stole the principal’s petty cash (and post its). Eddie is clearly upset but lets it go. 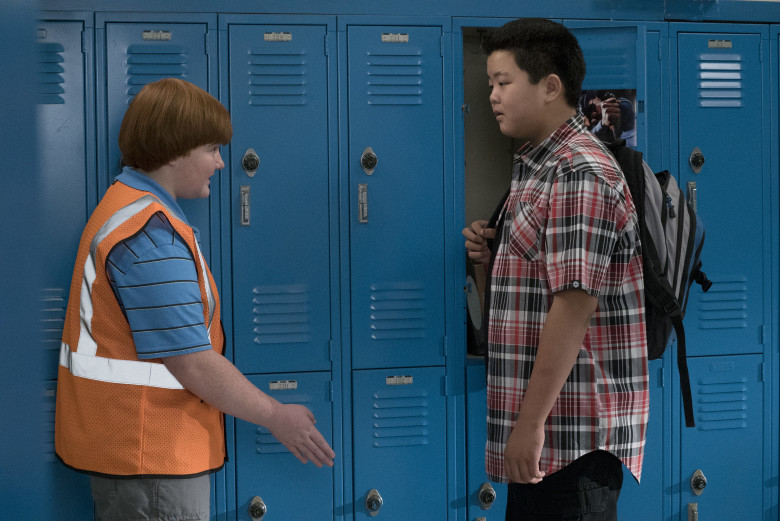 The next day, “the good boys” come and tell Eddie that Trent has been kicked off the safety patrol as the cash is missing. Trent despondently tells Eddie that safety patrol was the one thing he had that he enjoyed making Eddie feel even guiltier. Eddie goes to Louis for help on what to do. After failing to come up with a good metaphor for the situation, Eddie just comes out and says it. Eddie asks for his father’s help in making it right. Eddie then heads to Trent’s house to give Trent the information he can use to get back in the good graces of the principal. That information just happens to be when and how the hacky sack boys leave school for lunch. In addition to that Eddie has borrowed money from his dad to pay back the principal. Eddie now has to work at Cattleman’s to pay back the three hundred dollars with fifty-dollar interest.

With that Eddie rejoins his old friends to watch Dave’s play Brent (it is Rent changed for copyright reasons). The play maybe one of the funniest moments of the season thus far with AIDS being changed to the flu. Sadly, the principal shuts it down anyways due to the copyright issues.

In a throwaway b-plot Honey (Chelsey Crisp) helps Jessica pick out a photo for her novel’s jacket cover. Not happy with any of the pictures that Honey takes and/or procures, eventually Evan (Ian Chen) and Emery (Forrest Wheeler) get involved by trying to illustrate a picture and that doesn’t work. However, the publisher calls and tells Jessica that they love the photo that Honey sent in. Honey tells Jessica she did it as she was going to throw out her whole novel to write a new one out of fear. Coming to terms that she cannot control how well her book sells, Jessica thanks Honey for being a good friend. She is further pleased when Emery and Evan chose a picture of her that looks intimidating.

So yeah, a better than usual, but still run of the mill episode of Fresh. I’m not sure if people are still tuning in as I rarely see people talking about it anymore. Hopefully, we get some episodes that can really dig like last year with the immigration and election episodes.

“The Distance” by Cake