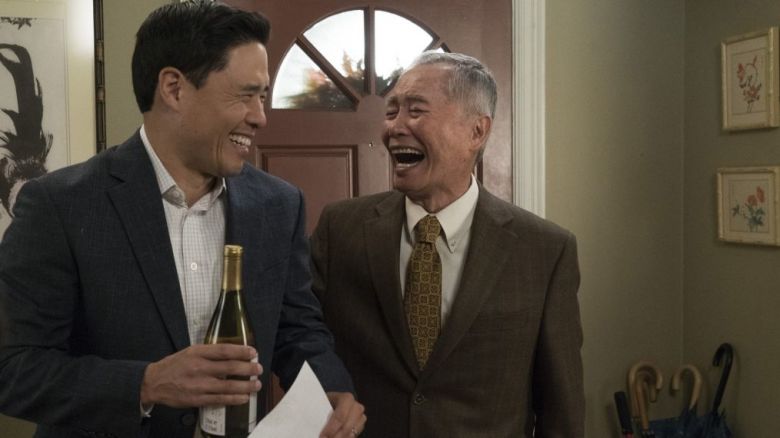 It’s Thanksgiving on Fresh Off the Boat this week which leads to a lot of familial dysfunction. Caught up in it all is Grandma Jenny (Lucille Soong). The poor woman becomes a pawn for Louis’ (Randall Park) misguided good deed as well as Jessica’s (Constance Wu) insistence on getting a Black Friday refrigerator on the cheap.

George Takei is back as Bernard, Grandma Jenny’s English teacher. Louis after reading Jenny’s homework thinks she’s lonely. We all know this is the opposite as she gets around town. Making matters worse is that Kenny Rogers won’t allow Louis to open the restaurant as he considers the holiday sacred. With that, Louis and Jessica resolve to have Thanksgiving at their house on the low, so they don’t have to deal with Jessica’s sister Connie. 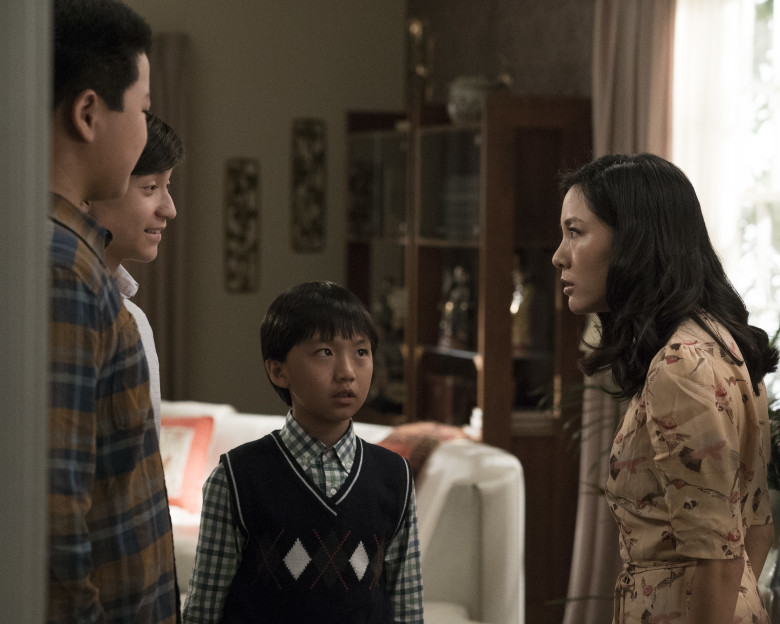 Attending Grandma Jenny’s class with her, Louis sees that Bernard and Jenny clearly have a thing for each other. Louis makes a classic dumb Louis move and invites Bernard to Thanksgiving dinner. Jessica is angry and tells Louis she’s working Bernard for an A in the class. However, Jenny pays Jessica a big wad of money to let her cook the Thanksgiving meal. Seeing this as an advantage, Jessica tells Honey (Chelsey Crisp) and Marvin (Ray Wise) about her good mood and how they need to take advantage of her goodwill to get her wheelchair to cut line during Black Friday sales.

When it comes time for the actual dinner, Bernard puts off everyone with his constant “Yum, yum, yum”, correcting Louis’ pronunciation on Oregon, the hearty belly laughs, corny jokes, reciting movie monologues, and an absolutely disgusting burp that kills everyone’s appetite. If I was there, I would have yaked. Props to George Takei for pulling that off. It was truly disgusting. Calling Louis son was a bit much too. And what animal takes away food while someone is eating it?

Louis pulls Jessica aside to complain about Bernard. Jessica says he needs to man up as he did this for his mother’s happiness, to which Louis counters that she’s only putting up with him to get her wheelchair. Jessica breaks down and admits it but tells Louis to stick it out, so Jenny can be happy, and she can get the wheelchair.

The two go back to see Jenny looking down. Louis asks Jenny what happened, and she states, “we broke up” leaving Louis to go on a loud rant about how bad he is. Even Jessica wanted Louis to stop but Louis can never help himself when it comes to rants. However, Bernard emerges from the bathroom telling Louis and Jessica that Jenny meant to say, “he threw up” due to Bernard eating so much. Bernard leaves swearing to give Jenny an F. Just as Jessica sticks up for Jenny to make sure she gets the wheelchair, a drunken Honey calls leaving a voicemail message blowing Jessica’s ruse and effectively killing her chances at getting the wheelchair.

The next day the two try to apologize and Jenny’s not having it. As Jessica and Louis blame each other, Jessica comes across Jenny’s last homework assignment hanging on the fridge. Reading it Jessica is moved by what Jenny wrote about having girls time with Jessica when she does his nails. The two mend their relationship and Jenny admits she’s was dating him strictly for the A. As the two decide to head out to find what deals they can at the mall, a still drunk Honey approaches the two women and sloppily tells them that she can’t remember anything.

As this all this goes down Eddie (Hudson Yang) uses Evan’s (Ian Chen) insecurity of being treated as a child to convince Emery (Forrest Wheeler) to help sway Evan into seeing I Know What You Did Last Summer over Flubber. Emery states that it’s a bad idea as one: the film is rated R and two: Evan gets scared easily. Well, Eddie successfully manipulates Evan into seeing the film. One of Eddie’s friends works at the theater and the three get in no problem. Well, Emery was right, and Evan is scarred by the R rated horror film. Emery and Eddie bicker over how to cheer him up. 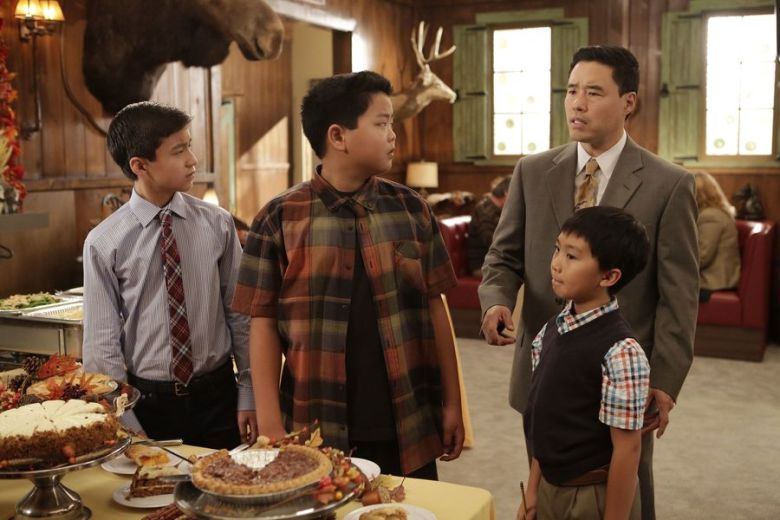 The boys decide to watch the Macy’s Thanksgiving Day Parade on VHS as Grandma Jenny taped it. In the episode’s best moment, a gust of wind blows the Barney the dinosaur balloon into a streetlamp ripping it. With no other choice, the performers decide to tear the balloon to shreds. Evan runs out of the room screaming in terror. Grandma Jenny watches the parade by herself later. Evan tells her why does she keep rewinding and watching over and over the park where Barney is ripped to shreds. She tells Evan that in life you’re either the knife or the balloon, and Evan should be tired of being a balloon.

With that Evan goes into Eddie’s room and finds his older brothers planning to go to the ice rink. Evan blackmails the boys into taking them to the teacher’s supply store. If they don’t take him he’ll tell Jessica that they all went to an R rated movie. When Eddie says it’s their word against his, Evan shows them the ticket stub leaving his older brothers no choice but to comply.

This was a well-done episode as when they have Jessica at the focus, that’s when the show is usually at its worse. However, this was smartly written, and I was cheering all sides to prevail in this episode that shows off Keith Heisler’s writing.

With B-plot this week, we continue Evan’s characterization of being a brat this season. Evan needs a comeuppance soon. All season he’s been making it hard for everyone else to get what he wants. And it’s kind of old now. Still, this was a very strong holiday episode. One that makes me wonder why this didn’t air next week and take this week off? In any case, this week’s episode was enjoyable through and through.