We know we’re in for a modernist spin on the rough-and-tumble days of North American settlement living from the first nanoseconds of Frontier, season deux. That’s because the Netflix/Discovery Channel’s co-production, which premiered on Friday, opens with a Beyonce quote — about the acquisition of power — over a black screen before the credits even roll. Netflix’s period epic delves into the cut throat world of fur traders, battling each other, the elements and the native people populating the disputed Canadian territories during the mid-1700’s. The new season’s second episode performs a similar trick, but this time with an Ice-T quote about hypocritical major label rappers. It’s kind of a wonderful conceit. The third episode cites Louis Karoniaktajeh for its pre-credits quote.

In the new season’s first episode, “Dead Reckoning,” righteous bad ass half-Irish, half-native American outlaw Declan Harp (Jason Momoa) evades capture at the hands an onslaught of new bounty hunters by heading towards the far northern territories (on the advice of a well-intentioned French fur trapper). Harp hallucinates his slaughtered compadre Samoset navigating him towards the northern territories as he sets off in a canoe. Elsewhere, the latest addition to Harp’s team, Irish immigrant Michael Smyth (Landon Liboiron), proves his mettle with a tactful new plan, collaborating with the comely Sokanon (Jessica Matten). They comprise, along with Harp, the Black Wolf Company, a rogue fur trade group, as they wait for Harp to make contact.

Tough bar owner Grace Emberly (Zoe Boyle) looks on as Captain Chesterfield (Evan Jonigkeit), out for blood, explains to the assembled masses at Fort James that the Hudson’s Bay Company has offered 200 pounds for Harp to a slew of bounty hunters. Meanwhile, Harp’s very injured former mentor, Lord Benton (Alun Armstrong), bedridden after being brutally injured last season, deals with dissent in his ranks. Benton berates Chesterfield for not living up to his standards. Grace, a friend to Harp, tries to convince Chesterfield to take advantage of Benton’s weakness with some level of power grab. Grace, meanwhile, has been secretly housing Malcolm Brown (Michael Patric), out for vengeance against Chesterfield for the murder of his brother. She forces Malcolm back to Montreal to be with an imprisoned brother. Chesterfield strives to rally his men against Benton, claiming that their governor is driven by personal vendettas. Eventually, Chesterfield and his associates forcibly remove Lord Benton from office, and insist that he face trial for murder. Chesterfield assumes governorship, and it almost immediately goes to his head. 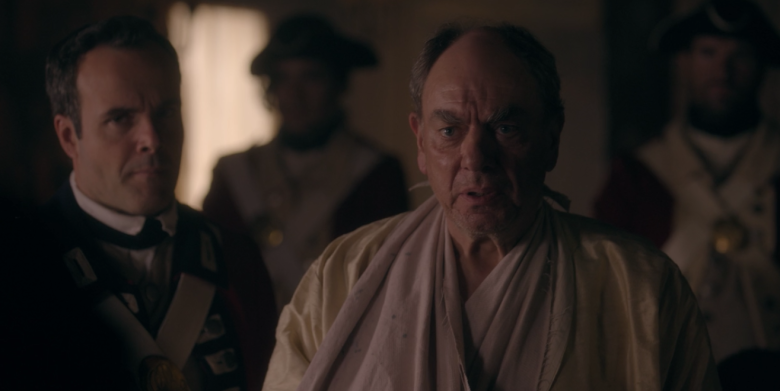 Michael and Sokanon have been robbing other fur traders and selling their pelts in Montreal. Elizabeth Carruthers (Katie McGrath), approaches Bertrand Bernard about a possible collaboration. An irate Samuel Grant (Shawn Doyle) kvetches about this potential partnership. Byron stews in jail. Harp recovers, thanks to the support of a gentle family in the northern territories. Grace and some of her informants observes the bounty hunters new to town, in search of Harp. Grace encourages Chesterfield to remove Harp’s bounty and help reduce the new, unwelcome element that bounty has attracted. Chesterfield demurs.

Bertrand, the fur merchant, is beheaded by one of Samuel Grant’s associates, and that head finds itself in a drawer in Elizabeth Carruthers’ desk, supplied as a warning. Grace encourages Chesterfield to issue the pardon to Harp — if he lifts the bounty, she claims, she’ll offer herself to him as his wife. Elizabeth meets Michael Smyth’s ex, Clenna Dolan (Lyla Porter-Follows), who now works for her. Elizabeth puts Clenna to work as a public face of Carruthers and Company, subverting Samuel Grant’s business dealings. Elizabeth continues to struggle drumming up new business. Michael needs Sokanon to get him out of a bind. They discuss their dire financial straits. Sokanon doesn’t want to look for Harp, because she fears he’s dead. Michael tries to convince Sokanon that they rob fur pelts from a bigger supply — that of the HBC. Grace’s bartender Imogen (Diana Bentley) gets friendly with a visiting bounty hunter. Imogen boldly taunts Lord Benton by his holding cell. Grant abducts Clenna and hobbles her in an act of reckoning with Elizabeth. Elizabeth releases Douglas Brown (Allan Hawco) and marries him to be more commercially appealing to new prospects. Grace marries Chesterfield as a business transaction. Chesterfield immediately renegotiates, and postpones the pardon of Declan Harp until Grace sleeps with him.

That’s the beat-by-beat breakdown of “Dead Reckoning.” I don’t want to delve to deeply into spoilers just yet for the ensuing two episodes. Let’s move quickly. During the season’s second episode, “Wanted,” the wandering fugitive Harp continues to evade capture from bounty hunters (especially a tall, heavily tattooed Viking of a man, Vladimir “The Siberian”), shacking up with an old friend, McTaggert (Jamie Sives), and getting into some sweet skirmishes. Back at Fort James, Chesterfield remains stubbornly committed to keeping Harp’s bounty in play. This ensnares him in a face-off with his new wife Grace. He pledges that he will request a full pardon for Harp if she agrees to sleep with him (a sacrifice she struggles to make). In Montreal, Samuel Grant and his covert lover Cobbs Pond (Greg Bryk) plot a takedown of the powerful Elizabeth Carruthers and the Brown brothers, using Clenna against them. Lord Benton, still en route back to England to await trial, continues to struggle physically. In “The Wolf and the Bear,” the third episode of season deux, Declan Harp and the Black Wolf plot a convoluted plan to rob the HBC’s Fort James stronghold and wreak remote vengeance on Lord Benton. Benton himself strives to recruit the lower-ranking crew as he travels back to London. Grace and Governor Chesterfield continue to butt heads. In Montreal, Malcolm Brown covertly stirs up added conflict between Samuel Grant and Elizabeth Carruthers. And maybe, just maybe, the hookup we’ve been awaiting for a whole darn year goes down!

In the near-year since Frontier, created by Rob and Peter Blackie, debuted stateside, Jason Momoa (also an EP on the show) has seen his star ascend with the launch of the initial Justice League movie, in addition to the evergreen re-watchable nature of his tenure with Game of Thrones. Momoa, a hulking presence but a man of few words here, is a powerful figure in Frontier, and his legend looms large even when he isn’t on screen. The show is gorgeously photographed and conceptually dense. The sweeping, minimalist music and extensive production value are similarly high-level. I’d like to see more Momoa amidst the show’s politicking and wheeling-and-dealing, and more of Momoa interacting with his charismatic Black Wolf Company teammates. Among those teammates, Matten stands out, with a tough, steely-eyed reserve masking hidden vulnerabilities, making Sokanon into another deeply compelling figure. I appreciate that Frontier strives to be an ensemble showcase, but I’d love to see more of Matten and Momoa. Here’s hoping that transpires in the second season’s concluding three episodes.