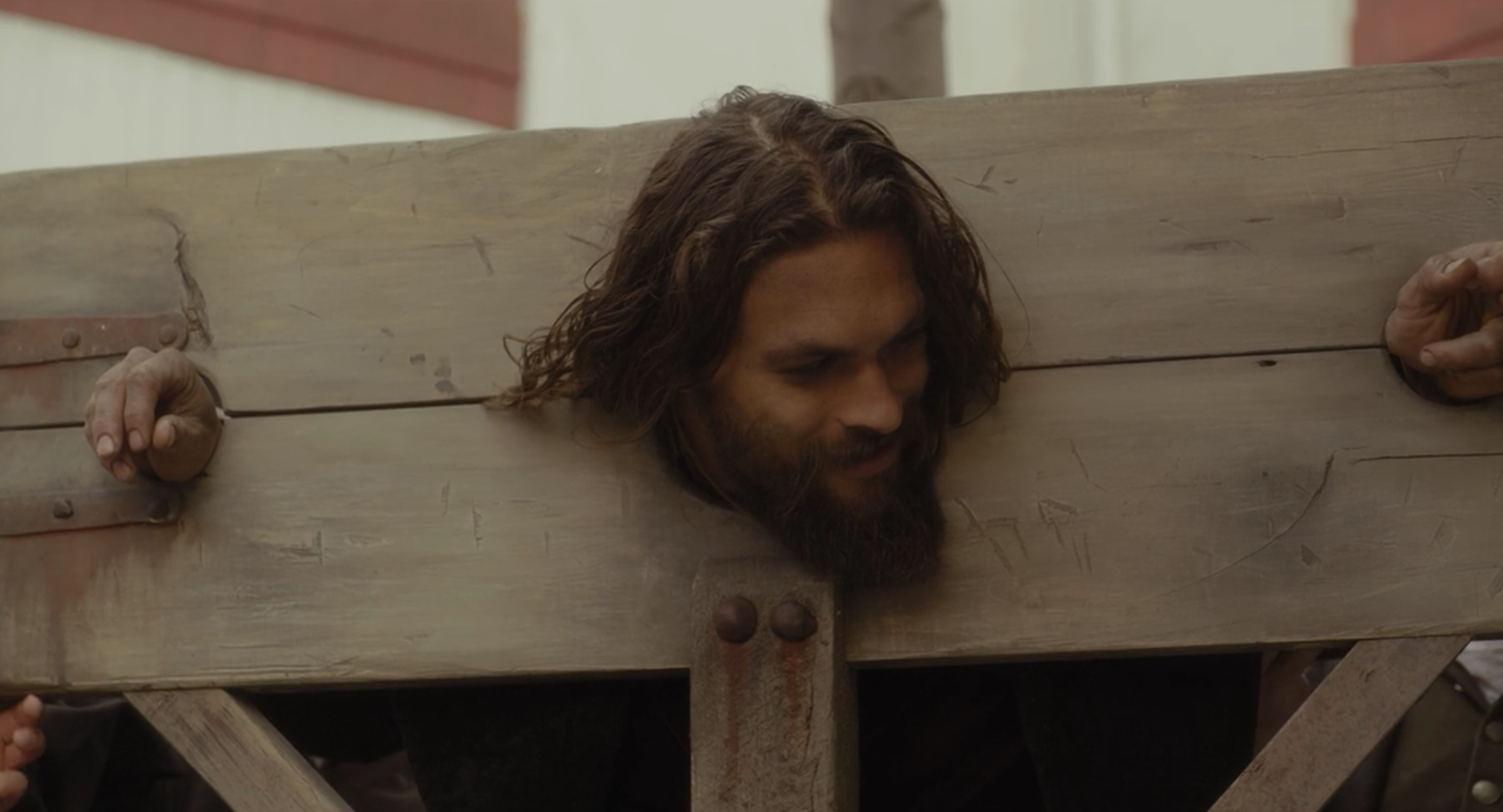 In episode four, “Mutiny,” Declan Harp (Jason Momoa), old friend McTaggart (Jamie Sives) and new friend Charlie (Demetrius Grosse), an imprisoned slave Harp freed by force, travel to Montreal to set up a meeting with Elizabeth Carruthers (Katie McGrath). Harp successfully secures Elizabeth as a buyer for the Hudson’s Bay Company furs he and his team are planning to steal. Meanwhile, new couple Michael Smyth (Landon Liboiron) and Sokanon (Jesicca Matten) meet Sokanon’s ex, and awkwardly ask him for supplies and men as they plan their epic heist of HBC’s furs. Sokanon grapples with her lingering feelings for both men.

Now-Governor Chesterfield (Evan Jonigkeit) continues straining to exert his power over new wife Grace Emberly (Zoe Boyle) remotely, as he tries to take over her bar. Grace has traveled to Montreal to collect her dead father’s effects, while continuing to pretend that he is alive so that she isn’t forced to send off her  In Grace’s absence, Imogen (Diana Bentley) has taken over control of Grace’s bar to avoid the influence of crooked Chesterfield crony Quartermaster Carter (Charlie Tomlinson). Sokanon rescues an underage Native American girl (of the Cree tribe) who has been kidnapped by Carter and earmarked for use as prostitute by Fort James’s most unscrupulous maniacs. The chaste Mary (Breanne Hill) and the girl murdered one of Chesterfield’s men, who had been on the cusp of having his way her. Sokanon vows to bring the girl, stolen from her family, to live with a Native tribe. After this incident, Imogen turns the bar into a brothel, and populates it with willing, of-age women.

Grace, who smuggled one of her husband’s letters freeing Harp (that her husband subsequently burned), saves a kidnapped Harp from a beheading in a Montreal town square. She confesses to Harp that she had to marry Chesterfield to grant her friend his freedom. Harp, a decent human being as well as the best-looking dude in all of Canada, is wracked with guilt over this news. They part ways bittersweetly, as Harp and his team look to reconvene with Michael and Sokanon.

By the time we get to episode five, “Cannonball,” Lord Benton (Alun Armstrong) finally completes the long-planned mutiny that he kicked off in the appropriately titled “Mutiny,” with the help of new recent ally Chaulk (Kathryn Wilder).

In an unexpectedly hot scene, Elizabeth Carruthers and Douglas Brown (Allan Hawco) finally consummate their marriage, after Douglas unexpectedly stands up for his wife and against his drunk of a brother, Malcolm (Michael Patric), who has requested she release him from Carruthers and Company. And it turns out the sex was passionate and pretty good.

Grace, upon her return, discovers Chesterfield sleeping with Imogen, and claims that as grounds for annulling a marriage she was never interested in to begin with. She returns equipped with her father’s seal, and a written statement (which she claims is from him), testifying that he remains alive, well and the proprietor of the Emberly bar, and giving Grace permission to run it in his absence. Chesterfield acquiesces to this request, but refuses to grant the divorce.

Grace gives Quartermaster Carter the boot. Imogen pleads with Grace to let the new, of-age women she had employed remain at the bar. A creepily apathetic Cobbs Pond is arrested for the murder of Elizabeth Carruthers’ late husband after Douglas Brown and Elizabeth conspire against him. Samuel Grant calculates the price it would take to pay off various Magistrates to release his lover. Elizabeth and Grant’s fight turns lethal, and leaves us with sort of an unexpected victor. Clenna (Lyla Porter-Follows) proves her loyalty to the surviving party in offering to cover-up the murder.

An increasingly unhinged Cobbs Pond has an interesting visitor in jail. Michael Smyth, who has successfully acquired the furs and disguised himself as one of Chesterfield’s guards, hides out from Chesterfield in the bar, requesting a few seconds’ head start against Chesterfield, who has followed him to the bar. Michael alerts Harp, McTaggart and Charlie. Harp opts to remain inside to give the others the opportunity to run. He does battle with a slew of Chesterfield’s men. After the recent surprising death earlier in this episode, I was actually convinced Harp had a sporting chance of biting the big one. Since Harp is by far the coolest character on the show, this would have been a massive bummer. He launches a cannon at Chesterfield and his men while escaping through an underground tunnel, and suddenly Chesterfield’s survival is ambiguous. Sokanon’s ex greets Charlie, Michael and McTaggart with an away team. Charlie and McTaggart are captured. Grace sends for Malcolm Brown to return to Fort James from Montreal. The psychotic Cobbs Pond handily orchestrates his escape from jail, and promptly returns home.

In the final episode of the season, “Keetom Takooteeo Maheekum (Return of the Wolf),” the drama reaches a full boil. Michael and Sokanon’s ex work together to move the furs to Montreal, for an anticipated meeting with Elizabeth Carruthers. McTaggart and Charlie struggle to not give up Harp to Chesterfield and his entourage. Chesterfield remains (rightly) convinced that Harp remains in Fort James. Grace and Imogen continue to clean up her bar, restoring it from its former recent identity as a brothel. Harp finds Grace and requests safekeeping.

Grace forces Declan to confess his true feelings for her, in yet another of the show’s well-plotted hook-ups. It’s surprising in the moment, but immediately sensible. Declan pitches Grace on leaving Fort James and going on the run with him. Imogen, potentially smitten with Chesterfield, turns traitor to Grace, as she and Harp plot the latter’s escape from Fort James. Chesterfield, aware of Grace’s emotional leanings, places Grace under house arrest and rewards Imogen with full run of Grace’s ale house once again. Their relationship gets murkier. Elsewhere, Sokanon brings the Cree girl, Victoria/Minno (Star Slade), to a compassionate Native tribe. Michael and Sokanon reunite and debate a confounding proposal from two unexpected fur pelt purchasers and their team. The petulant Malcolm and the grieving Douglas Brown find themselves quickly forced to realign and strategize a new way forward in Montreal with Elizabeth’s associate, Josephette (Karen LeBlanc).

I don’t want to divulge too much of how the show’s sixth episode unspools from here. Despite being a bit of a slow burn, we are treated to some emotionally rousing moments and some deeply rewarding, fully realized characterizations. This is a powerful series, and I’m so excited to see its recently-announced third season in action.