News has been released that Sony is planning a Ghostbusters cinematic universe. It has been revealed that new talents have been circling the franchise, including Joe and Anthony Russo, as well as Channing Tatum. The first of this series will be the upcoming Paul Feig directed reboot starring Melissa McCarthy, Kristen Wiig, Leslie Jones and Kate McKinnon.

These are all exciting plans, but I have to ask if they should have started a completely new franchise, title and all. From a business standpoint, of course it is smart to re-brand an old franchise, but will this generation have anything to call its own?

I’m not only talking about Ghostbusters, but there is potential for this new film to simply rely on its title, instead of covering new territory.

At the end of the trailer for Terminator: Genesys, Arnold says “I’ll be back”. Every child in the audience didn’t get the reference. If they were interested in why their father cheered at that line, they had to go back and watch The Terminator to find out. They didn’t get the first experience of a classic line in theaters.

I would be lying if I said that I wasn’t excited for the upcoming Star Wars film, but once again, children didn’t get why everyone gasped at the teaser trailer when the Millennium Falcon appeared. That’s another experience that they didn’t get to fully take in.

With the upcoming Ghostbusters franchise, a lot of the audience will obviously be anticipating it because of the modern classic Ivan Reitman film, and the sequel that is better remembered than watched.

I love a great comeback, but when the sequels and reboots are outweighing the original content, there’s no way to avoid being permanently nostalgic. I’d argue that there’s a realization that you come to every time you watch a sequel. It reminds you of how content you were with the original, and that maybe you’ll never reach the height of that feeling again. To quote Bradley Cooper from The Hangover Part II, “come on guys. You know the drill.” To quote Bradley Cooper from The Hangover Part III, “let’s end this.”

Most recently, I’ve been optimistic about film. This is thanks to the groundbreaking original content of 2014. I could happily say that I hadn’t seen a Birdman, Gone Girl or Boyhood before. My favorite film of last year was Guardians Of The Galaxy, a massive success with characters that haven’t been seen on film before. Wait a minute…was Birdman about the burden of living down old glory?  Yes it was.

On the other hand, I did enjoy 2011’s The Muppets for having a message about how things aren’t what they used to be. Without that message though, you get the less celebrated Muppets Most Wanted.

The expanded Ghostbusters universe reminds me of a great party that you try to live up to. You could try all you want to re-create the events of that night, but you won’t get the same results as when it happened organically. Only time will tell if the name Ghostbusters has anything new to offer to this generation. My favorite scene in Indiana Jones and the Kingdom of the Crystal Skull was when the ark of the covenant popped out of a crate. There’s no saying that my favorite scene in the new Ghostbusters won’t be a Stay Puft Marshmallow Man reference. 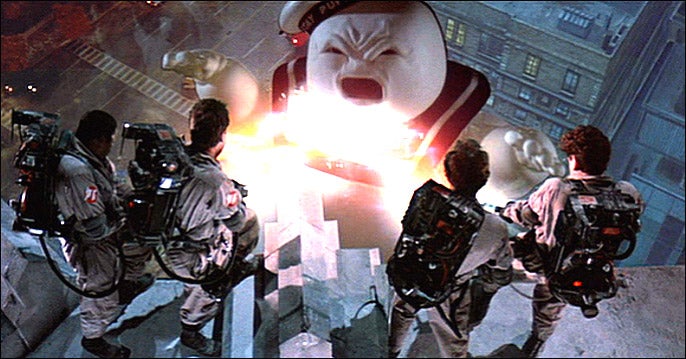