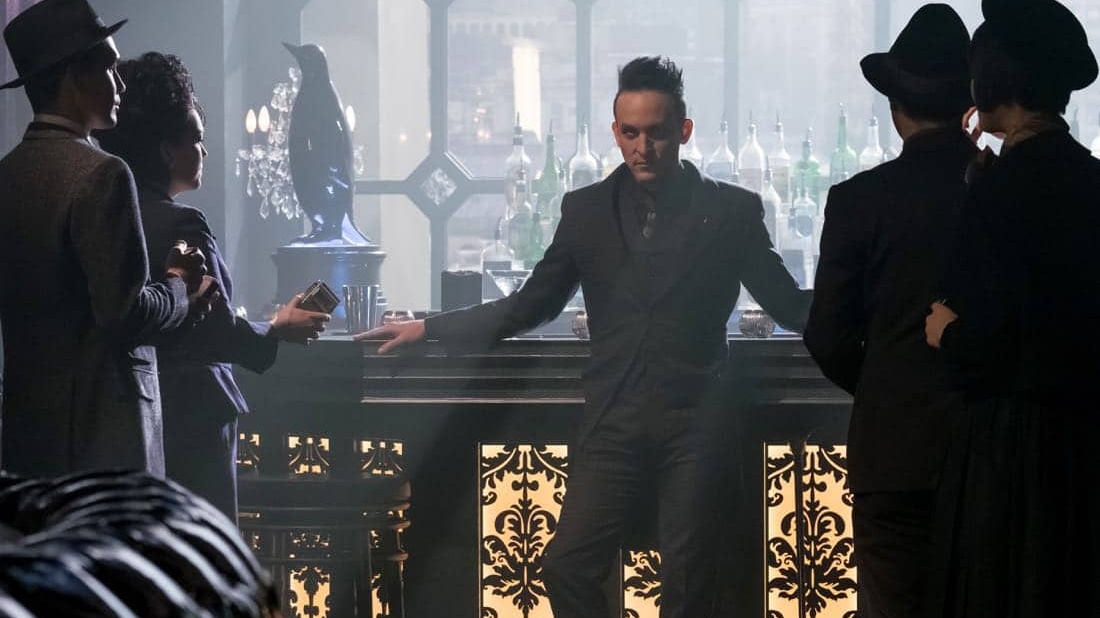 Gotham swings into season four with a whole new criminal pyramid led by Penguin in “Pax Penquina.” We have seen a fantastic explosion of great television over the past ten years. There are more genres than the doctor, lawyer, cop trifecta of the previous thirty years and each genre has several excellent shows to reach viewers in different ways. The thing that amazes me about Gotham is how each season pivots and feels different than the season preceding it. The characters are the same, but the show remains fresh and surprising. “Pax Penguina” is packed with action. Bruce has 2 fights, Selina has 1, Gordon has a few, plus there are a couple of heists. Call it an action sequence every six or seven minutes. Add to this, they introduce a whole new criminal philosophy, expose its strengths and weaknesses, and introduce a new prime villain. It’s a great playground for the heart of the DC universe.

Bruce Wayne is a full-on vigilante, watching the streets of Gotham from rooftops, attacking when he hears trouble. A young couple is surrounded by a group of muggers, Bruce drops in and beats them down. The last conscious mugger explains he has “a license.” Penguin is handing out actual licenses for different kinds of crime, this perp was licensed to smuggle and loot. Bruce tells Alfred about this new type of criminal but Alfred warns him about mission creep. Fighting petty criminals may drain his attention from his main mission of preparing to defend Gotham from Ra’s al Ghul. Meanwhile, unionized crime is a growth industry, but murder isn’t allowed. 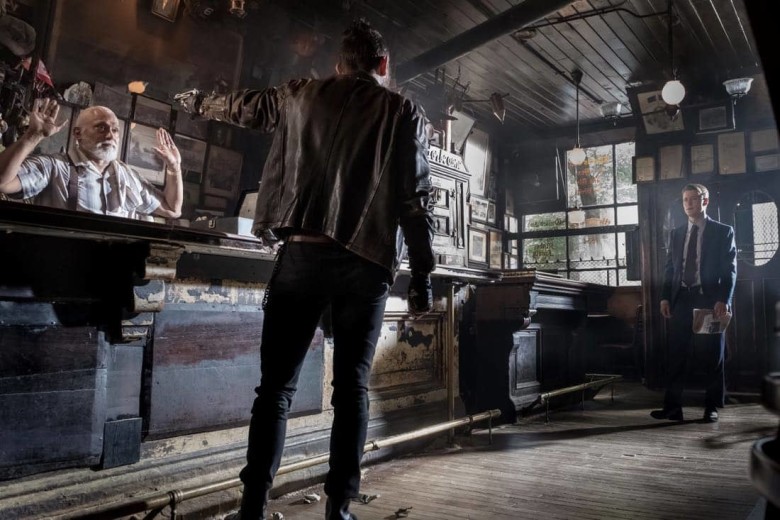 Penguin convinces the Mayor and Police commissioner this will be good for Gotham, plus they’ll each receive 2.5 percent of the overall take. Regular criminals can still be arrested, but if GCPD apprehends someone with a valid license, they get to walk. Gordon is the last to get the word, he arrests a guy robbing his morning coffee joint and brings him in, but Bullock explains “licensed” criminals don’t do time. The Commissioner and the Judges have all agreed. Gordon sees great danger in letting the citizens of Gotham believe Penguin is protecting them, not GCPD. For now, Bullock tells him to respect the licensed criminals or resign. Most of the other cops and detectives share Bullock’s opinion, no cops have been killed or assaulted since Penguin’s new plan hit the streets.

There are still independent criminals operating in the city. When Grady and the Merton Gang crash a wedding reception to rob the family and guests, Victor Zsasz runs them off. He explains they don’t have the proper license issued by Penguin. After chasing the Merton Gang away, Zsasz allows a proper licensed crew to complete the hold up. Grady Merton bribes the new chief of Arkham to release Jonathan Crane, the subject of his father’s fear experiments. Merton plans on using the Crane formula for their upcoming crime slate. First, they use it successfully in a bank heist. Gordon deduces Crane was involved on some level. This heist, Gordon’s hunch, and Bullock’s lead set all plots sailing towards the gala opening of Penguin’s newest club, “The Iceberg Lounge.” 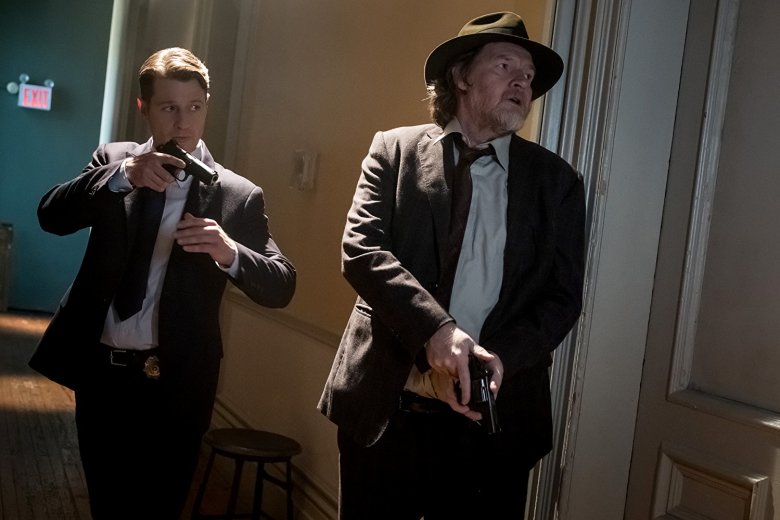 Penguin has Nygma displayed in ice but Barbara Kean hasn’t been seen since he took over “Sirens.” Selina and Tabitha are roaming the streets kicking butt. These two make a great mentor-student team, Catwoman’s rise is as important and engaging as Batman’s. Again, there is this whole issue of licensed crime versus unlicensed crime. Zsasz explains the new procedure to them and extends an invitation to Penguin’s “Iceberg Lounge” opening. They can kiss the ring and receive their proper licenses. Selina is ready, she needs proper crime to survive, but Tabitha doesn’t want to submit to Penguin’s organization.

Bruce visits Gordon at GCPD HQ to test his position on the licensed crime issue. Gordon agrees it’s a dangerous idea, but he can’t fight something Gotham’s entire justice department supports. Bruce quickly sees the advantage in a recorded database of criminals. In the right hands, it could be used for justice. Everyone in Gotham who is someone is headed for the big party. The Merton Gang intends on taking Penguin down and Gordon plans on showing the relevance of GCPD by arresting the few unlicensed criminals left in the city. 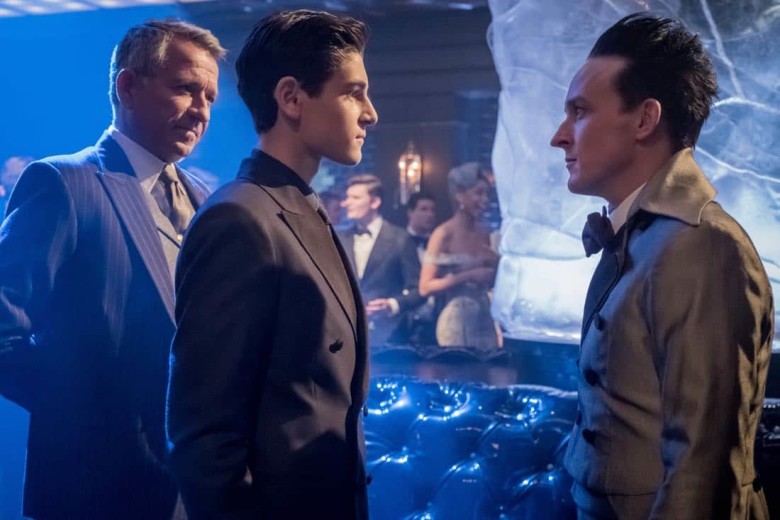 Penguin invites the press, because that never fails him, and quickly discovers and apprehends the Merton Gang with their tanks of fear gas. He could kill them in private, but he wants to embarrass the GCPD publicly and moves the gang upstairs to the spectacle. Selina and Tabitha both showed up which gives Bruce a quick chance to apologize for the mean, self-righteous jabs he threw at her when Alfred was in the hospital. Then, he pleads with Penguin to turn over the Merton Gang to GCPD. Penguin sees Bruce is just being a good guy, but refuses. However, before Penguin can finish his spectacle, Ivy kills the power. Some of the gang escape in the chaos, but Penguin gets sprayed with the fear gas. When the lights come back up, a journalist takes a photo of Penguin crying in Gordon’s arms. Not the headline Penguin wanted from the evening. Gordon arrests the Merton Gang leader and puts a BOLO out for Jonathan Crane; who is now a complete Scarecrow.

The best part happens later when Bruce Wayne breaks into Penguin’s criminal license administrative office and steals the list of criminals with their types of crimes. It’s like a queue for the young vigilante to schedule at his preference or priority. Smart kid.