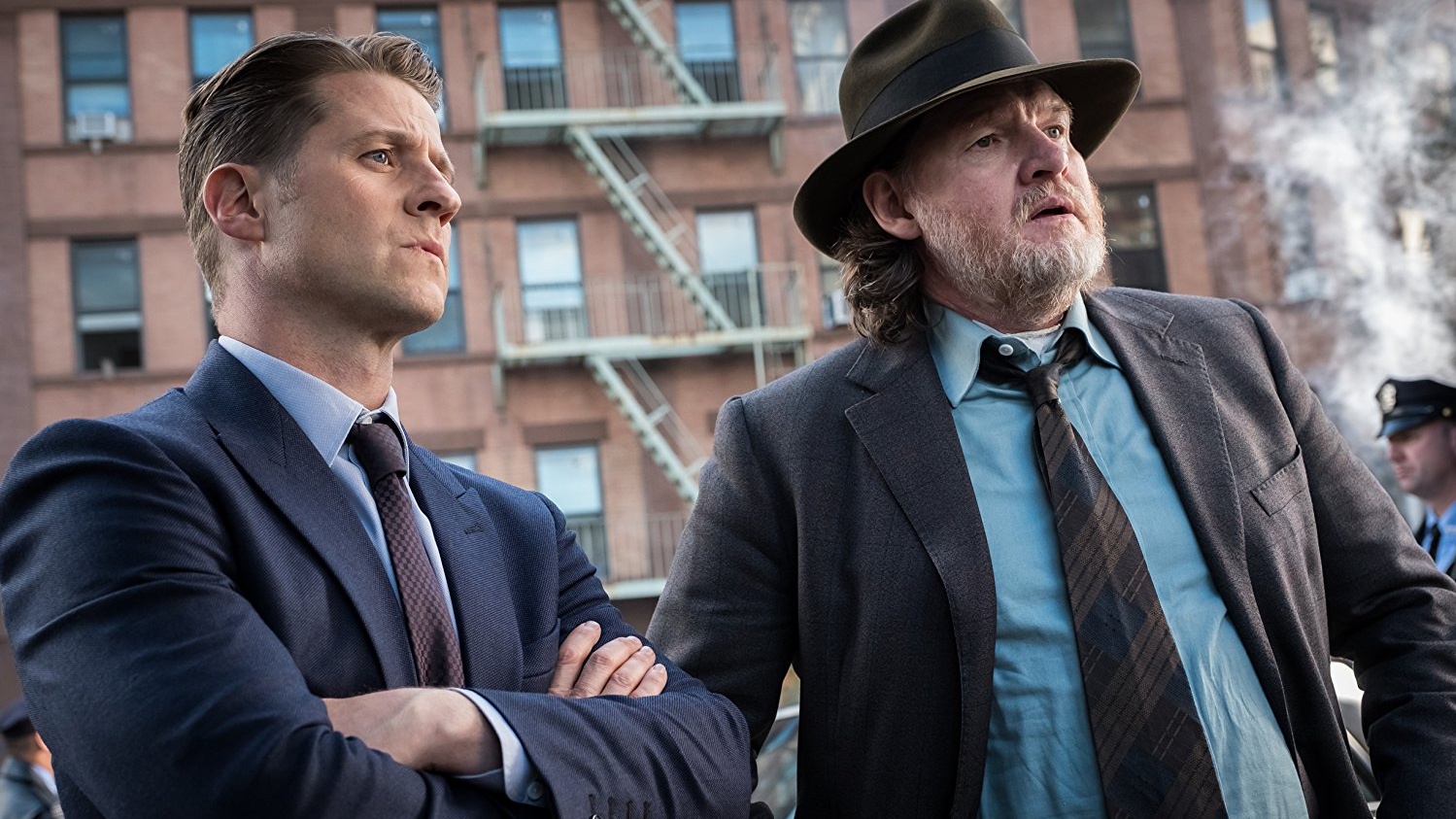 Professor Pyg grabs three cops off the streets of Gotham and leads Gordon and Bullock to “A Day in the Narrows.” I’ve been hoping and waiting for a Sirens spin off since Gotham started putting the deadly trio into rooms and clubs together. This week, they really messed with my mind. First, Barbara says she’s paying Tabitha and Selina the shares to walk. The club was subsidized by Ra’s al Ghul, without him, there’s nothing to keep them together. Selina says they should stick together, run down leads, take down targets as a team. Barbara isn’t interested, but Tabitha is willing.

Selina’s first target is an outlaw gang called The Demons. Tabitha doesn’t think they are ready to take down a gang their size. Selina goes in alone. She sneaks in and grabs the stash, but she doesn’t make her way out as easily. The other Demons discover the raid, burn the lookout’s face off, and search their warehouse for the intruder. A place like Gotham, where a criminal can get a license for crime, needs something like a Bed, Bath, Lair, and Beyond because these places need some help. Selina phones for support and Tabitha answers. 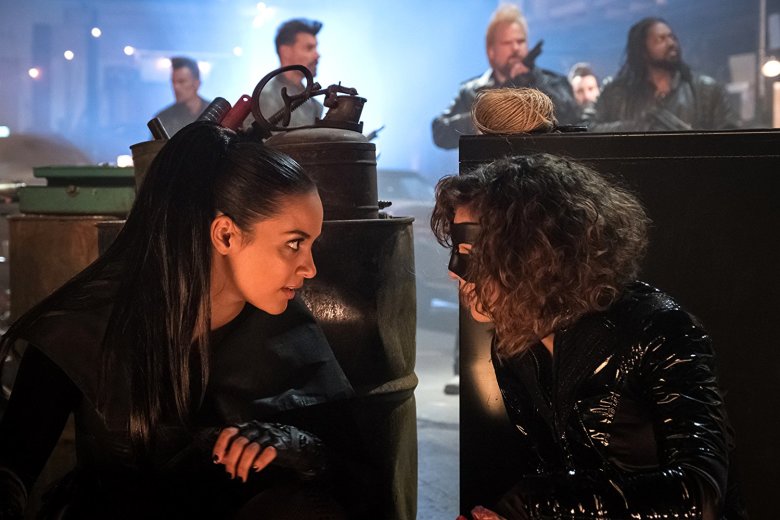 Again, Tabitha tries to convince Barbara they should help, but Barbara still isn’t moved. She a mysterious trickster, Tabitha is much more passionate. Tabitha creates a diversion to sneak into the Demons’ lair and finds Selina, but they don’t have a way out either. Finally, Barbara arrives guns blazing and eliminates the remaining Demons. This time, she agrees they should group up and had back to “The Nest” to plan their next heist. This is so close to being a full-on Sirens team. Gotham, you are right there, pull the trigger on the spinoff!

Alfred throws a fundraiser for Gotham’s poor and needy at Wayne Manor where Bruce mopes around, empty from killing Ra’s al Ghul. Then Grace, a former classmate, convinces Bruce to ditch the event and spend an evening with kids his own age. Bruce doesn’t know how to do this and gets off to a bumpy start with another spoiled brat, Jones. The group heads to a club, but the bouncer won’t let them in. Bruce meets with the owner for a few minutes, buys the club, and gets everyone in but Jones, touche. This is solid billionaire brat activity. He throws his money around, gets drunk, cuts loose. He probably should have done this a lot sooner, take the edge off.

Sofia spends time with the kids at the orphanage. Though Penguin likes the idea of an orphanage, he’s uncomfortable with kids and their demanding presence. He brags about his Pax Penguina relationship with the GCPD, but Sofia thinks it’s a bad idea, GCPD will eventually fail and it will reflect poorly on his involvement. Penguin gets upset with her criticism and doubles down by taking a more active role in their current situation with Professor Pyg. 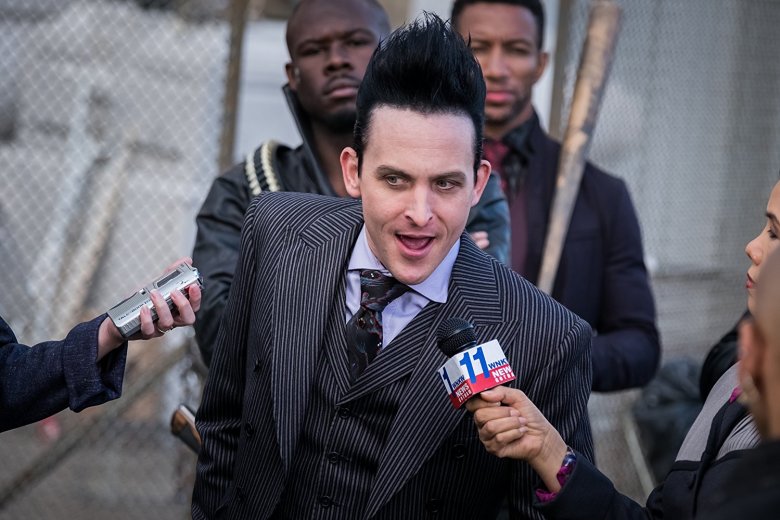 Pyg sends 44 boxes with pig heads in them to GCPD, one for each cop in the building except for Gordon. There’s a growing canyon between Gordon and Bullock over how close they should be working with Penguin, Bullock is pro, while Gordon is completely against. Then, three cops go missing. Gordon wants to find them and stop Pyg before Penguin’s people. He doesn’t want the people of Gotham getting used to the idea GCPD is irrelevant. This is a great concept, heady if you think about it. Are corrupt government officials more necessary than their organized criminal counterpart? Gordon would say, yes. Bullock would argue the two work together, a thin grey line.

Penguin arrives with his new enforcer, Headhunter (Zsasz had a family thing this week). Penguin’s tactical squad and GCPD shake down an apartment building in The Narrows for witnesses. Penguin’s people obey no constitutional protections and GCPD isn’t much better, but one terrified witness does give a location. Gordon hurries to the next spot and finds one dead cop and one tortured but alive, Officer Fisoli. Gordon rides with Fisoli to the hospital and explains when he’s ready, he can return to work as a good cop, help him rid Gotham of its rot, drive corrupt cops out of GCPD. Fisoli gives Gordon his next clue. He says Pyg was headed someplace where there wasn’t any justice, an abandoned court house in the narrows. 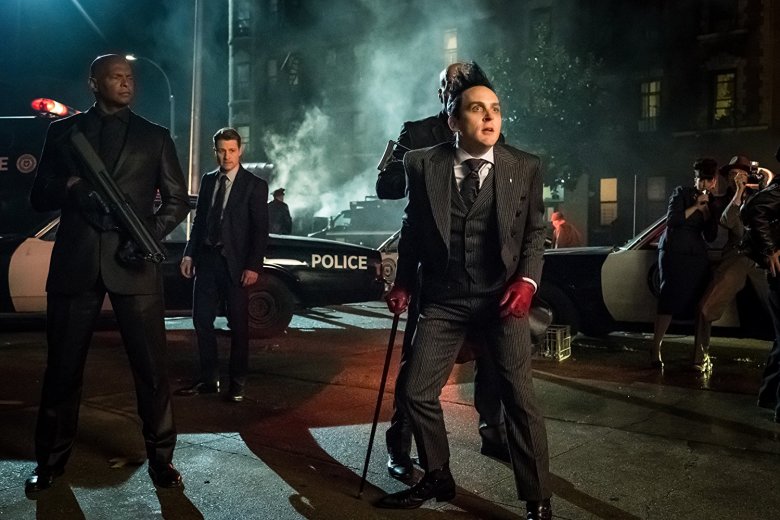 Bullock tells Penguin and he arrives at the old building with his tactical team and the local press. Bullock believes the third, missing cop, is locked inside with Pyg, but he wants Penguin’s men to precede GCPD. Why risk cops when Penguin’s thugs are willing to take the initial hit? Gordon doesn’t like it, but Bullock makes him stand down. As the two teams enter, Gordon gets a call from Pyg. The cop Gordon rode in the ambulance was Pyg in disguise. Now, Gordon believes the old court house is a massive trap, and it is.

Bullock shoots the guy dressed as Pyg which turns out to be their missing police office, then remote machine guns open fire, strafing the hall. Headhunter gets hit, but Bullock drags the cop he wounded to safety. This looks bad for Penguin and only Gordon rushes in to save the day. It’s a bad turn for Bullock too. The press hail Gordon as the hero, Bullock just looks like the cop that shot one of his men. It takes him about ten seconds to seek the comfort of his hip flask. Other GCPD quickly turn in licensed criminals. Everything’s headed in a more traditional comic book type direction at this point. They put several great pieces in motion, now they need to play with the narrative. Unleash the baddies for a few weeks.