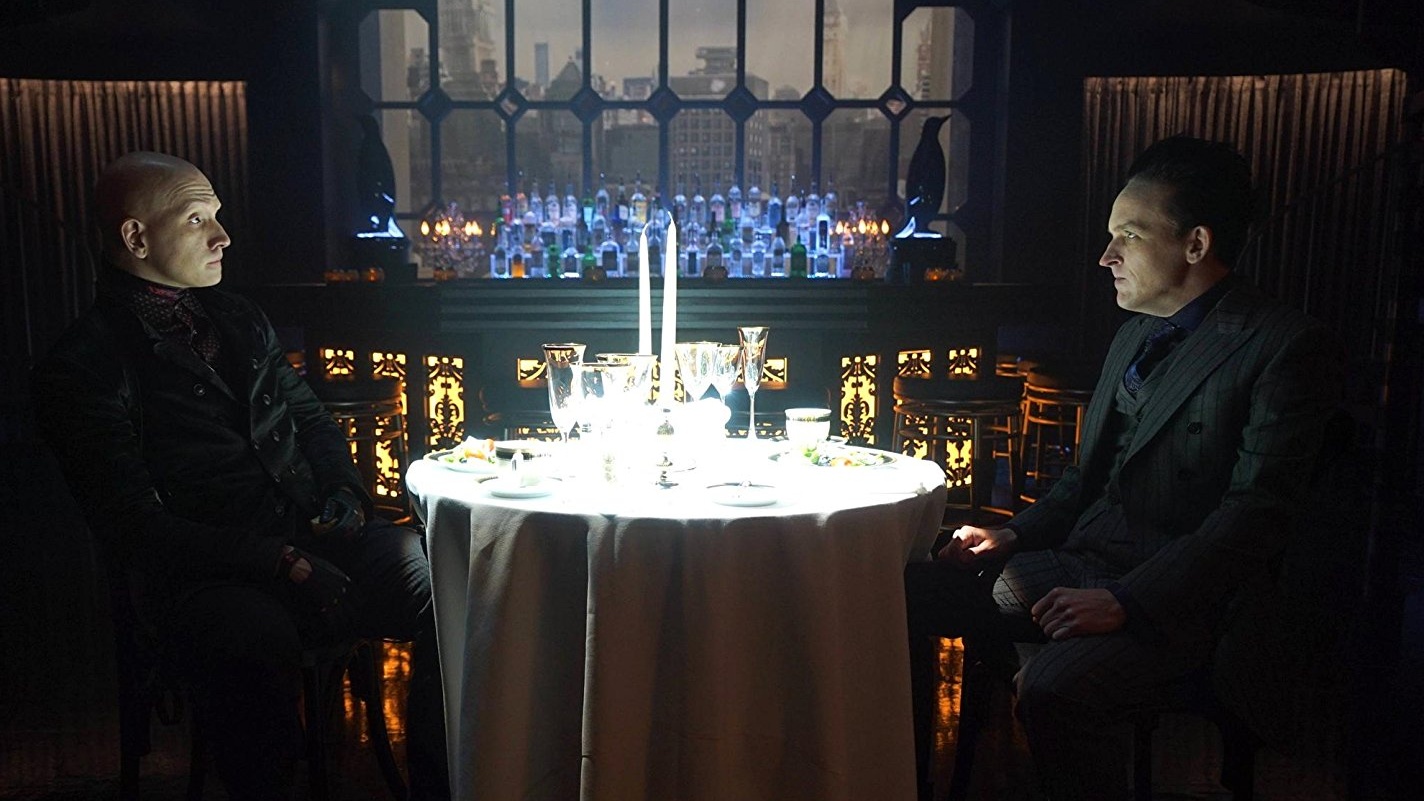 There’s a new killer in Gotham but he only hunts dirty cops for “Hog Day Afternoon.” Bruce was absent this week along with the Sirens and there’s still no sign of Scarecrow. This story focused on the GCPD’s relationship with Pax Penguina, Sofia’s plan to upend Penguin, and Nygma’s search for a brain. I love to shine appreciation on Cory Michael Smith (Nygma) but there’s no denying award deserving Robin Lord Taylor runs Penguin’s gauntlet of emotions.

Penguin opens up to Sofia more and more. He’s earned his trust issues and hears the alarms, but he really desires friendship, the warmth of real companionship. Every season, at least once per season, his heart gets annihilated. Sofia has had several public lunches to show Falcone family support for Pax Penguina, but she suggests a private lunch, no agenda, just two friends enjoying a meal and a talk. He longs to believe that. Then, she stands him up. Penguin can feel his bruised-up heart harden. He tells Zsasz to find her, follow her, see why she canceled. DeVito was a great Penguin, I’d argue you couldn’t touch his performance, then Robin Lord Taylor came along and lifted the character into orbit. 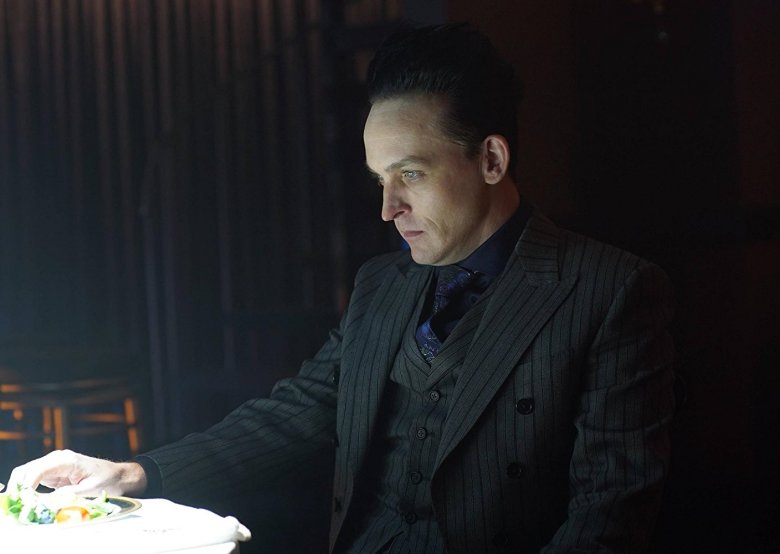 Zsasz writes his reports, takes pictures from her stops, logs the people she’s been meeting. Sofia met with the new mayor, then went to the Old Gotham Heritage Hotel where she met with the city zoning commissioner. She ordered the construction of a new wall and gate. Penguin orders Zsasz to kill her, but he drops in first to monologue. He says he knows she bought the old hotel and is fortifying it for proper lair to plan and command a war against him. Sofia apologizes for missing lunch and doesn’t blame him for thinking that, but she says she has a surprise for him at the hotel.

Sofia transformed the hotel into an orphanage, in the Falcone name but in his honor. Penguin is touched, he was wrong (this time) and she doesn’t rub his nose in it. This is the warm, vulnerable Penguin. Gordon gets the other one. Cops who serve as bagmen for Penguin are being murdered and left with pig heads masking their faces. Gordon asks Penguin for help, but he doesn’t know or care who makes the payoffs for him. However, he does have his license clerk check their book for clues. A man named Wally Clarke applied for a burglary license to rob a special butcher shop. 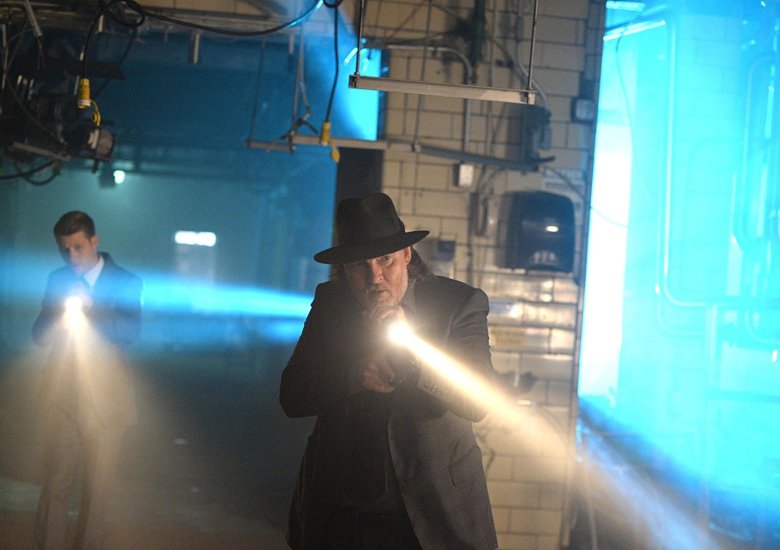 Clarke caves at the slightest questioning. He robbed the pork, but someone else commissioned the job, someone he calls The Professor. Four pigs were taken, Bullock and Gordon expect four victims. None of the other cops want to give Gordon the names of the police bagmen, even though they are being targeted. Bullock figures out the last one, Officer Nakajima, but Professor Pyg already has him. Gordon and Bullock find the perp’s truck at a warehouse, Nakajima looks dead with his pig mask on, but he makes noise the closer they get. When Gordon removes the pig mask, he sees it pull the pin of a grenade surgically implanted inside Nakajima. Clever and gross. Gordon warns Bullock but Nakajima explodes.

Gordon wakes strapped to a chair like Nakajima, but Professor Pyg tells him not to worry and monologues his mission. Professor Pyg is targeting all the corrupt cops in GCPD, Gordon knows that’s a lot. Pyg even mentions Bullock in his rant. He says corrupt cops made him suffer profound loss. That’s interesting, but we don’t have any clarification yet. Pyg takes off when Bullock arrives searching for Gordon. Pyg reaches Bullock first and cuts his throat in front of trusty friend. 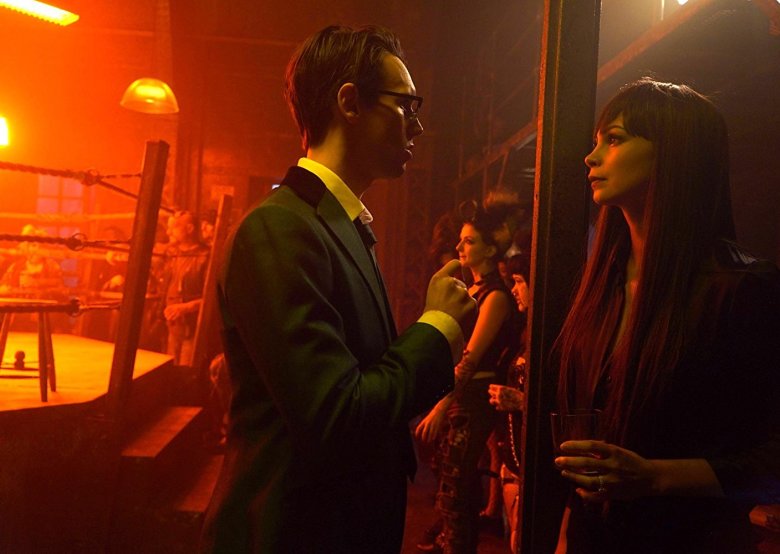 Bullock gets to the hospital in time and he’ll be able to return to duty soon, but Pyg escapes. Gordon confronts Bullock about his corruption, taking Penguin’s payoffs. He tells Bullock he can’t do it anymore, but I’m not sure Gordon can make that call. Regardless, it’s good to get back to the legit police story.

The last piece of tonight’s story belongs to Lee, Nygma, and Grundy. Drew Powell’s Grundy is a fantastic marriage of Hulk’s strength and the Frankenstein monster’s need for friendship. When you add Lee to the mix, you get her brains and heart, Grundy’s brawn, and Nygma’s resilience after suffering a massive loss. Nygma asks for Lee’s help getting his evil brains back, but she says “no.” Then, he tries to threaten her, but he can’t figure out how, his mental gears sieze when he tries to sequence. Lee runs a small, one room clinic for people who can’t afford health care, but she’s always running out of proper meds. That need drives her to accept Nygma’s money for brains proposal.

Smith made a great evil genius as The Riddler. Somehow, he’s even more compelling as the reduced Nygma, constantly reaching for logic he knows he should possess. Grundy doesn’t acknowledge Nygma’s defect, he only cares about their friendship, but Lee sees him struggle. She lets him wiggle on the hook a bit, enjoys a little fun at his discomfort.