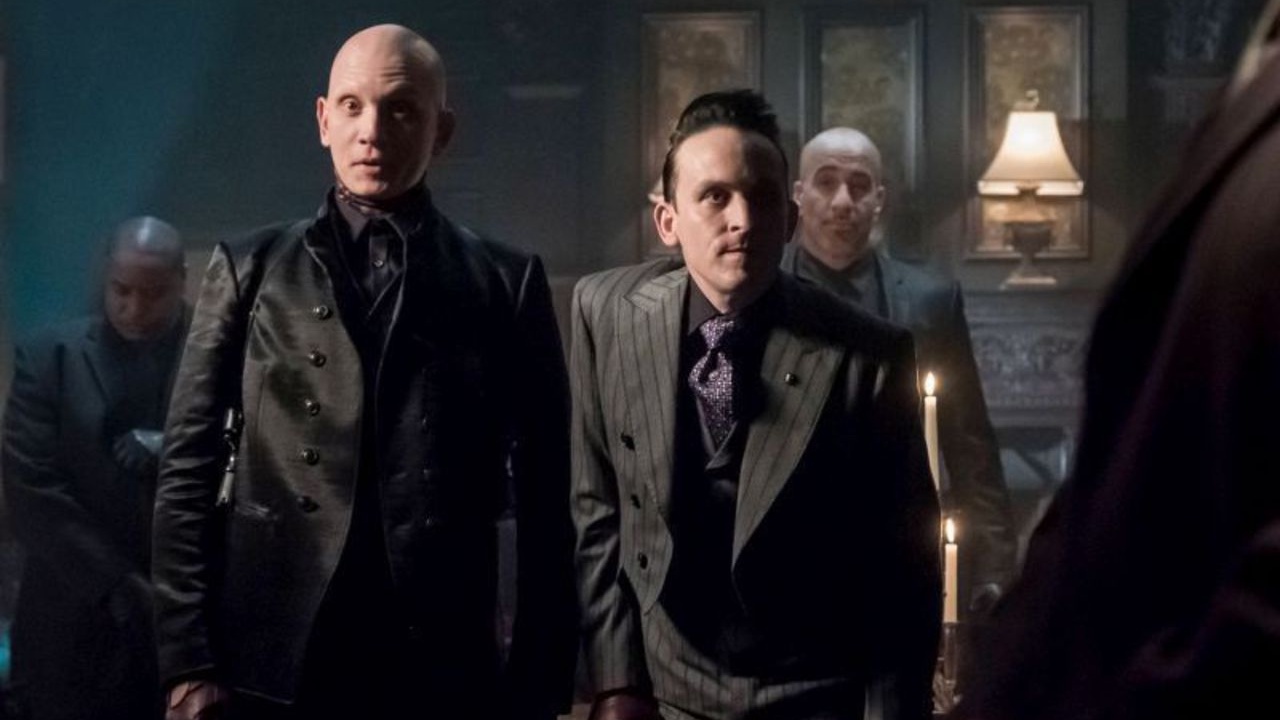 Penguin faces his competition for the Gotham underworld while Bruce and Alfred research the mystery of “The Demon’s Head.” This was mostly a continuation of last episode; we learn more about Ra’s al Ghul, the meaning of his ancient knife, Sofia Falcone’s mission, and Nygma’s revenge. Det. Harper partners with Gordon while Bullock takes some vacation days. Also on vacation; the Scarecrow has been missing for a few weeks, so have Tabitha and Ivy since she got all hopped up on mysterious potions.

Bruce and Alfred take the embalming knife he overpaid for to a subject matter expert, Dr. Winthrop. Winthrop needs to spend some time with the blade and gets an assist from his intelligent grandson, Alex. Winthrop traces the knife’s origin to the legend of the “Demon’s Head,” an ancient immortal who rose from the water. Ra’s al Ghul drops in and asks Winthrop for the knife, but Winthrop had time to give it to Alex for hiding. Winthrop is a soft old man but he doesn’t shake from al Ra’s threats, he knows these things can be dangerous in the wrong hands. Ra’s kills Winthrop after someone sounds the fire alarm, he leaves empty handed, but Alex witnesses the murder from the shadows. 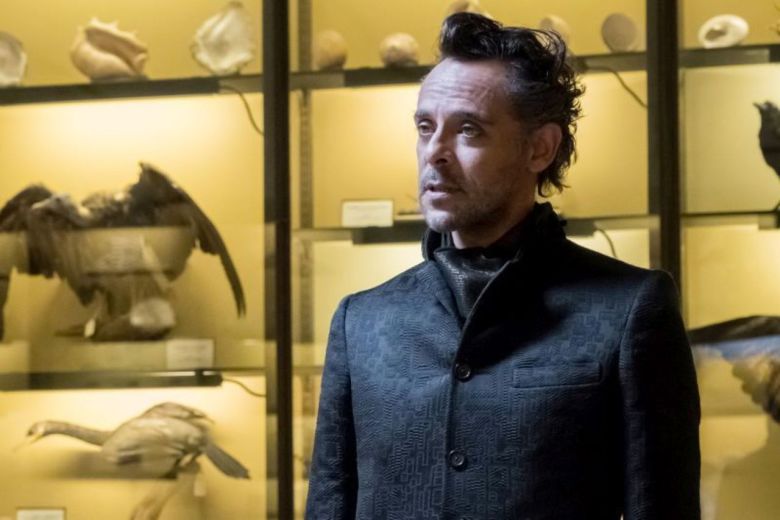 Detectives Gordon and Harper arrive on scene and call the last people Winthrop had an appointment with, Bruce and Alfred. Bruce tells Gordon they were having their new purchase appraised but they should also be looking for the grandson, Alex. These are two intelligent outsider types and both Witnessed the death of the person closest to them. Bruce figures where Alex is hiding and leads Gordon to him.

Meanwhile, Ra’s calls in a tracking team, Hunter and Anubis, to find and retrieve the knife. He tells Anubis he can kill Alex after he gets what’s he’s looking for. Hunter and Anubis attack Gordon, Bruce, and Alex at the museum where he was hiding. Bruce and Gordon fight Anubis and Hunter. Alex tries to run and hide, but Anubis tackles and bites him. He probably would have killed him accept Gordon shoots Anubis giving Bruce and Alex time to escape.

Gordon returns to GCPD with Alex’s backpack, but the knife isn’t in there. Ra’s waltzes in a few moments later and introduces himself as a Nepali government official. He confesses to hiring Barbara Kean to procure the knife from auction and tells Gordon the legend of the immortal and the blade. Gordon tries to bluff he has the knife in evidence, but Ra’s searches the backpack when Alfred storms in and distracts them. The kids are in serious danger again. 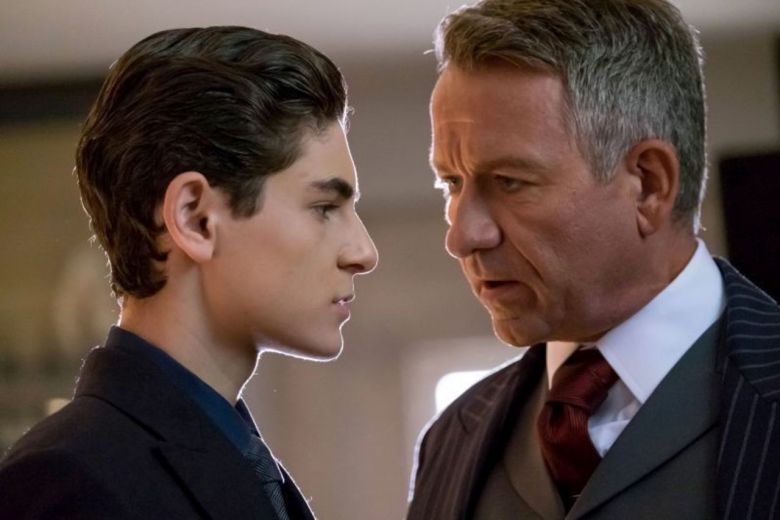 Alex takes Bruce to the museum case where he hid the knife but Hunter and Anubis catch up. Bruce and Alex hide in displays for a few minutes and Gordon arrives in time to fight off Anubis and Hunter. This time, Alex joins the fight, but he’s captured by Ra’s. Gordon pulls his weapon, but Ra’s has a different knife to Alex’s throat. He says he’ll free the boy if Bruce hands over the special knife. Ra’s cuts Alex’s throat, killing him, when Bruce refuses to give up the destiny blade. Then, Ra’s allows Gordon to arrest him and send him to Blackgate.

This was an important, though tragic, step for Bruce to take. He chose to protect the lives of many over the lives of one, even one that mirrored him so well. I can’t figure out what Ra’s is up to, but he seems cheerful when he walks into prison.

The rest of the story takes place in Penguin’s world. Penguin invites Sofia Falcone to his office to question her motives for moving to Gotham. She claims she did I it to manage Falcone charities but it’s really an elaborate plan Penguin devised to flush Falcone loyalists from hiding. Three capos go to Sofia, hoping it’s time to overthrow Penguin, but he’s waiting and executes them. Sofia acknowledges what he did right but doesn’t hesitate to point out where he went wrong. It seems like a straight victory for Penguin, but she also learned a lot about him. 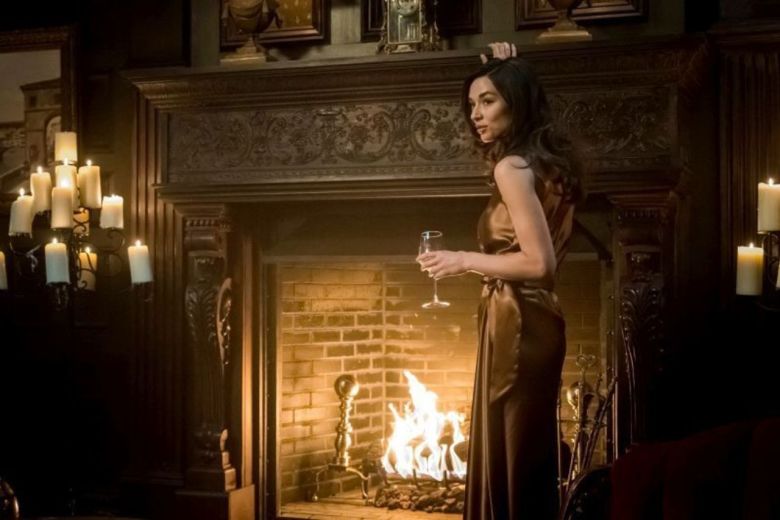 Nygma drives the best subplot of the night. He suffers from Scarecrow (as in Oz) complex. Nygma knows his brain isn’t working right, but he’s too impaired to know how off it is. When he thinks he’s back to full mental capacity, he sends a pair of rappers to sing a riddle to Penguin about where to meet for a showdown. Penguin is anxious to freeze Nygma again, but he never arrives for the showdown. Nygma sends another lame rapper-gram, but this time, Penguin lets Zsasz torture information out of the duo.

Penguin springs a trap on Nygma but realizes how regular, even below average, his capabilities are. He opts not to freeze him because there’s no game in it. These guys are always great on screen together. Penguin walks Nygma through his tragic thinking and planning. He makes him see how far he’s fallen and leaves that thought to torture his spirit.