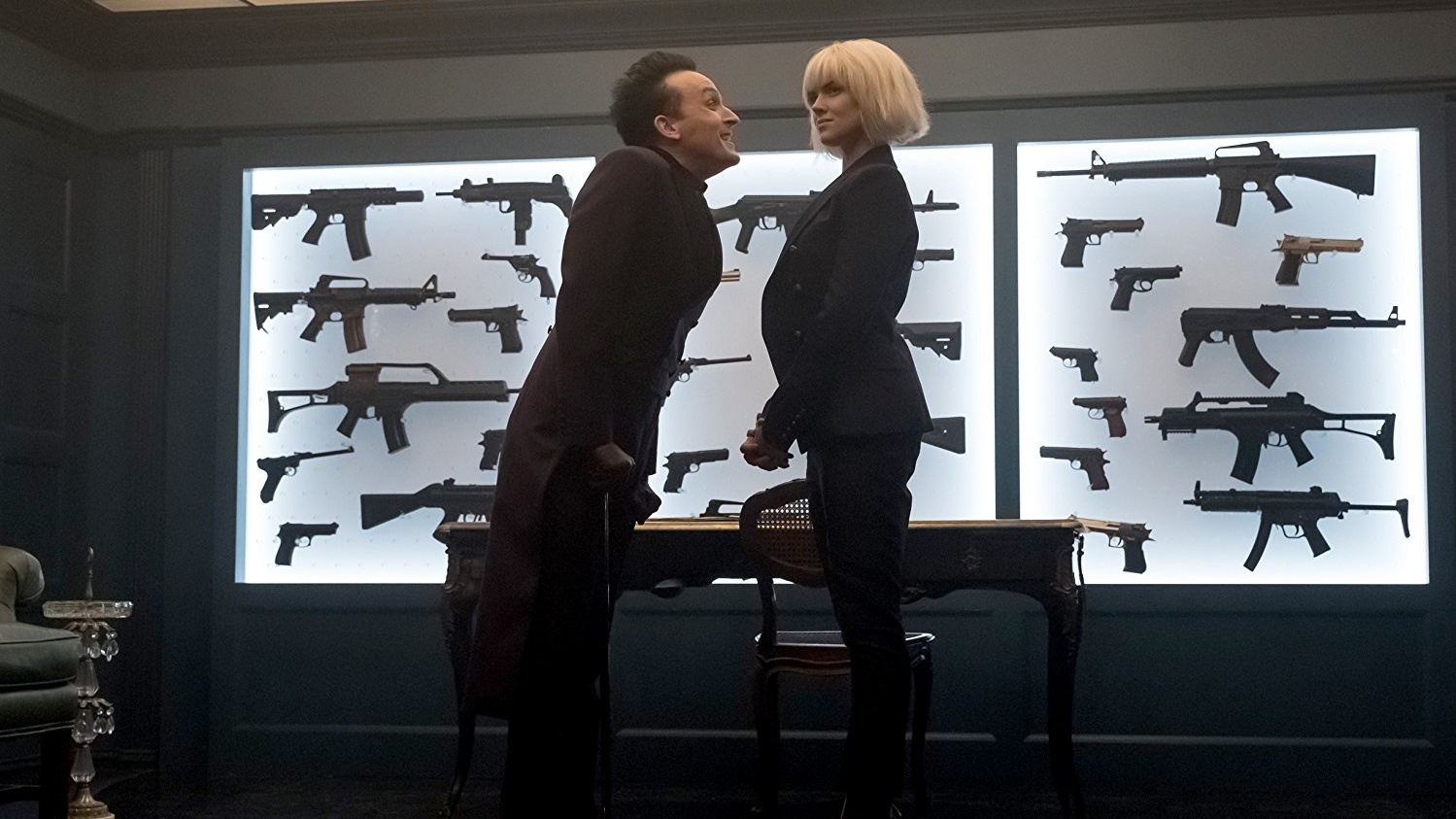 Bruce is arrested after dropping in on a robbery in progress, Barbara makes her fabulous return to Gotham and Scarecrow infiltrates his former asylum in “The Fear Reaper.” Detective Gordon finds the abandoned mansion where Jonathan Crane cooked his fear potion. Crane’s lab is smashed, but Scarecrow left Grady Merton in the field, thoroughly freaked out.

Scarecrow is on a crusade to eliminate fear by making people face and fuse to their most debilitating phobias. He returns to his old asylum to terrorize Warden Reed with a healthy dose of his childhood fear, clowns. Love the show, but clowns? Let’s call this weak, timid, and lazy. Warden Reed marches down the hall murdering his staff while under the influence of Scarecrow’s fear fog. Then, Scarecrow doses the rest of the inmates/patients for his revenge army targeting the people who killed his crazy father, GCPD. 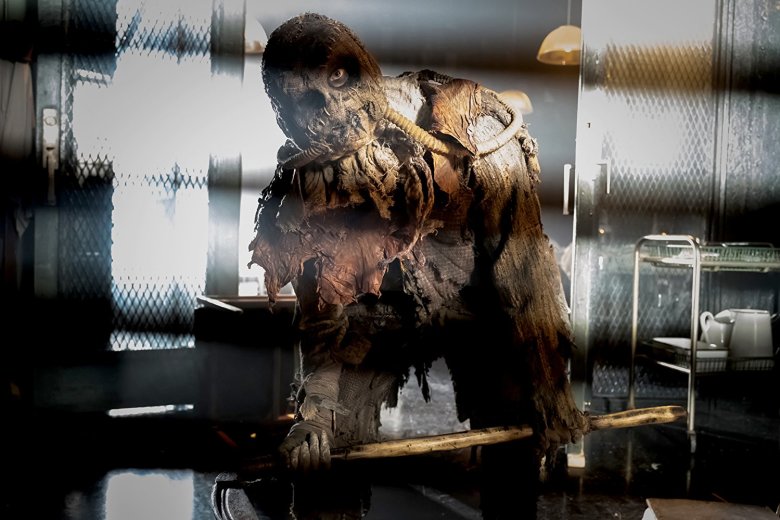 Meanwhile, Gordon is under attack from Penguin’s press machine and mutiny from his peers. Gordon releases Bruce from lockup, he was arrested at a break-in he was trying to thwart. Gordon wants to have a serious sit-down about Bruce’s activity and his place in the criminal-enforcement food chain, but it must wait. Alfred and Bruce run into Lucius Fox on their way out, they pitch him a weak cover story about rock climbing. Fox is 360 smart, he doesn’t believe the cover story but he does figure out the truth. Fox is the best support team in town.

Penguin makes a very public declaration that he can protect Gotham better than GCPD and points to their frequent failures. When Gordon responds to the Scarecrow chaos at the asylum, not even Bullock will ride with him. Bullock isn’t completely on Penguin’s side, he just sees the value in standing by the rank and file cops. Penguin makes a public bet with Gordon that he can’t arrest Jonathan Crane in the next twenty-four hours. Gordon doesn’t accept the challenge, but the press makes it look like he does.

Gordon rolls into the asylum alone and is immediately attacked by Warden Reed in clown paint. He defeats Reed but Scarecrow is in the security office and traps Gordon in a hallway with a dozen of the fear-fog crazies. Gordon fights them, tries not to kill any, but eventually faces Scarecrow in Reed’s office where he is sprayed with the fear potion. Gordon’s fearscape involves Lee in a bathtub, slashing her wrists, blaming Gordon for ruining their lives. Gordon defeats the cheap shot fear-fog by facing his fear instead of marrying it. It’s much better, more personal than clowns. 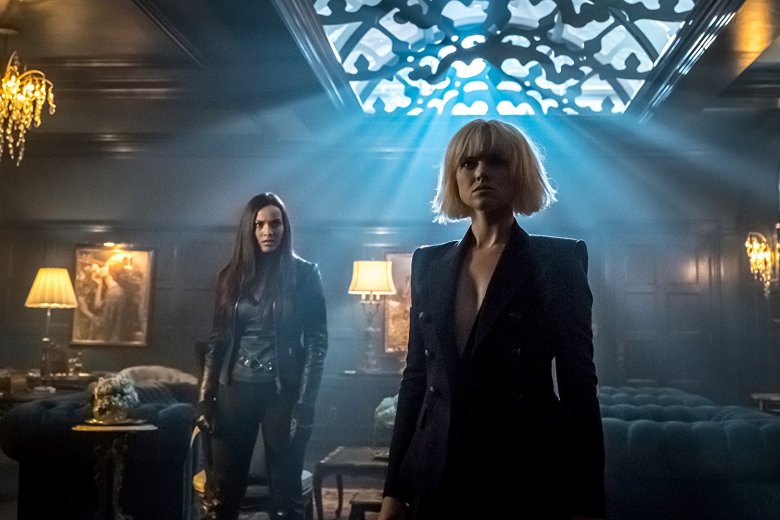 Gordon returns to the fight and discovers water breaks the fear-driven spell. He activates the sprinkler system which wakes all the crazies but the biggest one. Scarecrow escapes while Gordon fights the Goliathan lunatic. When he returns to GCPD alive but empty-handed, Penguin offers any cops that follow him three times their regular pay. Bullock takes Gordon out for a drink and discusses the days when Falcone ran the Gotham criminal element. Gordon considers meeting with Falcone and his army about Penguin and his crime reformation.

Selina and Tabitha both receive cards inviting them to accept a new opportunity. They are both surprised to see Barbara alive and in charge of a whole new fancy lair. Tabitha won’t forgive Barbara for killing Butch and doesn’t trust her motives, but Selina is interested. Barbara offers them both partnership in her new business, arming and outfitting Penguin’s licensed criminals. Tabitha storms off but Selina says she’ll talk to her later when she calms down.

I love how they play with this group of outlaws and I still hope they get their own spin-off. They don’t always get along but they have several common enemies. Penguin drops in with Zsasz to menace Barbara about her license fee and weapons tax. She agrees quickly and he wonders who funded her return from the dead and the nifty lair. Meanwhile, Selina tries to talk Tabitha into partnering with Barbara. Ivy sneaks in and wants to join the team too, but Tabitha only sees her as Penguin’s partner. Tabitha is slow to trust, Ivy will have to wait for now or deal with Penguin herself. 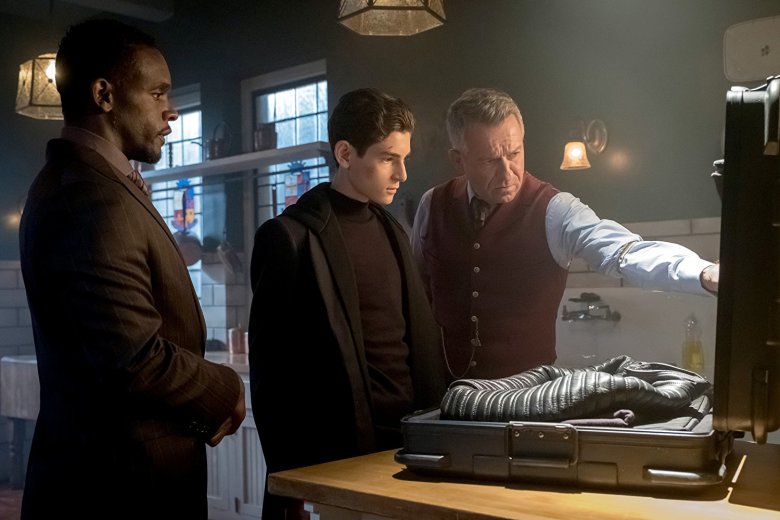 Selina and Tabitha return to accept Barbara’s offer under Tabitha’s one sinister condition. Tabitha wants to chop one of Barbara’s hands off to settle their old score. Barbara agrees and offers her hand, but Tabitha’s butcher knife misses by a few millimeters. They agree to start fresh on Monday. While they’re making nice, Ivy returns to her potion dealer for some seriously dangerous power juice. She downs some heavy shots of the sickest stuff but we won’t see her transformation until a later episode.

The final plot move involves Bruce’s journey to Batman. Alfred catches him on his way out for another patrol, he’s a good fighter but he can’t stop bullets. Enter Mr. Fox with a case full of vigilante goodies. Fox offers Bruce a special protective suit developed for the military; it’s light, flexible, and bulletproof from ten-feet or more. Alfred and Bruce are quick to test the suit in vigilante exercises. It isn’t just the dark suit that moves Bruce closer to his destiny, it’s also the dynamic between him and Alfred. We’re getting closer to those dark wings on bright clouds.