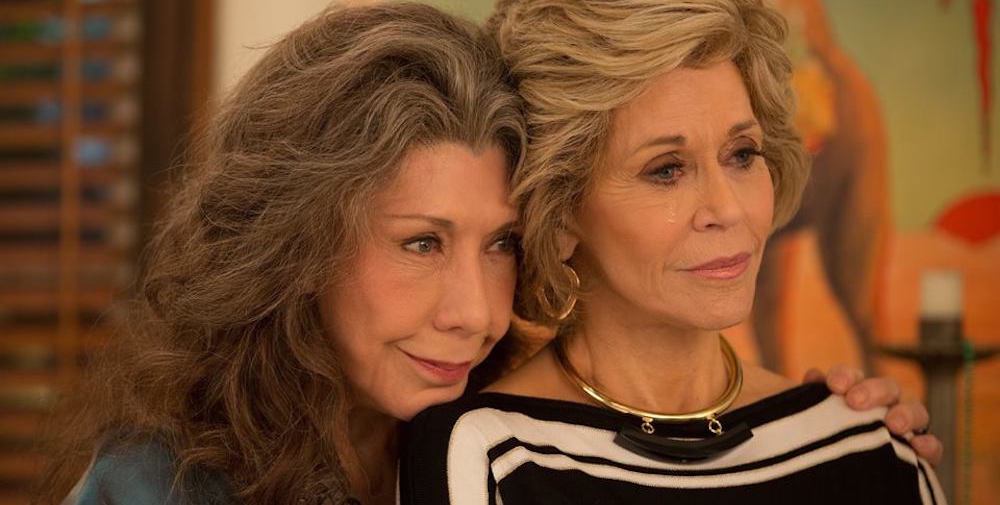 This season of Grace and Frankie was super enjoyable, as all seasons of Grace and Frankie have been and will be if there’s more, because watching Jane Fonda and Lily Tomlin watch paint dry would probably be entertaining. So give them a few worthwhile gags and some even slightly engaging drama, and it’s obviously going to be worth a watch. That said, there was some weeeeeeeeird stuff going on this season that really ate in to the fact that the characters on this show — even beyond Grace and Frankie, obviously — are some of the most entertaining people on television. There were points at which I actually rewatched parts because I wasn’t sure I was actually understanding what was happening… but it was actually just kind of bad and inexplicable. More on that later.

We open this season with Frankie seemingly happily settled in Santa Fe, with Grace having moved on and acquired a new lodger to take Frankie’s place. Sheree (the always hilarious Lisa Kudrow) is always in pink and always over the top, and is sort of like the antithesis of Frankie — but also similar to Frankie in that she brings Grace out of her shell, and is the off-the-wall, belly dancing complement to Grace’s stiff popped collars. Frankie comes to visit and obviously hates Sheree off the bat. It’s revealed that part of her ire over Sheree’s presence comes from her own unhappiness. Despite being in love with Jacob, she hates Santa Fe, and wants to move home.

In order to make sure Sheree doesn’t end up homeless, Grace and Frankie help her reclaim her dead husband’s house from his greedy children. After that, Frankie moves back in with Grace and she and Jacob agree to do long distance, and Sheree disappears — sort of unfortunate, since every show could do with a little more Lisa Kudrow in it. And thus begins the show as we know it — Grace and Frankie bantering and arguing juxtaposed against Sol and Robert bantering and arguing. The kids are all right, but they’re also nightmares, and Brianna once again emerges as an easy favorite. She’s mean and funny and emotionally handicapped, and I’m sorry if you relate to her as much as I do.

Grace and Frankie continue to run Vybrant, but run into a hiccup when — following Frankie’s inevitable break up with Jacob — they go to visit Harriet, their most reliable customer, to cheer Frankie up. Upon arriving, they find out that Harriet actually died of a heart attack while using their vibrator, which obviously sends Frankie into a moralistic tailspin. Grace brings a blogger to their house to get ahead of the news, and to try to assure people that Vybrant is safe, but Frankie hijacks it and goes on a spiel about how they’re murderers. A seventy-eight year old woman going on and on about how sorry she is that her device killed somebody when it absolutely didn’t obviously stirs the sympathy of the internet, and soon a “I am Harriet” movement starts, bringing both benediction and extra business to Vybrant. 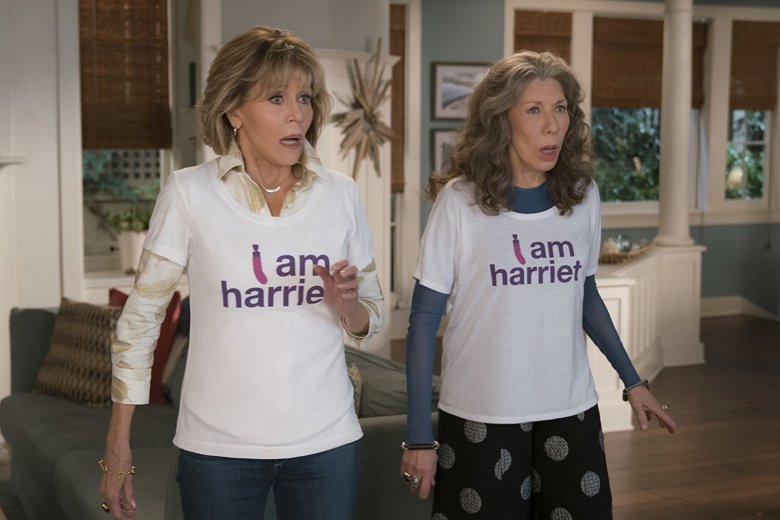 Bud and Allison have their baby — who, in one of my favorite little moments, Frankie refers to as ‘Faith’ on her way out the door before Bud and Allison have named her, and they decide it fits — and decide to get married. Coyote and Allison, foes from day one, agree to dislike each other in peace going forward. Coyote and Nadia are still together and resist sleeping together in deference to her recovery almost until the very end. All in all, Coyote remains super endearing and they seem to have a healthy, positive relationship. That said, most of the time when we see Coyote it’s because Mallory is driving him around or picking him up for something inexplicably, and since he was previously in love with her, it seems like if we get more of Grace and Frankie that might be a romance we revisit.

As for the Hansons, Mallory is officially separated (or actually divorced? I’m not entirely sure) from her husband, and spends a lot of time understandably stressing over the fact that her ex bought a Porsche and is a doctor and so probably is getting laid a whole bunch. But sad, stressed out, slightly angry Mallory is a total delight to watch, to be honest. Brianna and Barry are back together and doing well — I really enjoy their dynamic. Brianna tends to do really crazy, seemingly mean things, but Barry knows her well enough to — after he cools down — sit down with her and be like, “alright, so what’s actually going on here?” And then Brianna explains what happened, which usually comes from emotional ineptitude and a fear of failure, and they sort it out. I don’t know, I just really like them. And Brianna. Brianna is a nightmare and also a wholesale delight.

Sol and Robert are struggling with their relationship through most of the season. Robert’s interest in theater and Sol’s interest in activism starts to drive a wedge between them, and in that gap they start to see more issues in their relationship. They decide to see a therapist, who brings up the idea of an open relationship to them. At first they’re incredibly resistant, but then they both get super hot and bothered over flirting with Sol’s hot young friend, and the season ends on the friend walking naked into their kitchen so… they’re probably going to end up with an at least slightly open relationship, because it seems unlikely that ends in any way that isn’t a threesome.

Grace is dating Nick, the smarmy businessman from last season, much to Frankie’s chagrin. I don’t know if I’m just incredibly bad at judging ages (I am) or if everybody had this experience, but turns out the main point of this relationship is that Nick is significantly younger than Grace, and she’s self-conscious about it. Jane Fonda obviously looks bonkers good in general, let alone for being eighty years old, so that’s part of it but like — I just spent the whole time being like… is he really younger? Everybody else on the show seems to be able to tell, though, so that’s, y’know. Really all I have to say about that.

Frankie’s arc this season is dealing with the fact that, after lying to a post office employee to get her mail without a key, she finds out she’s legally deceased. This forces her to confront her mortality, and so forth, but the biggest impact is that she gets back in touch with her older sister, whom she cut out of her life after her sister tried to tell her Sol was gay before their wedding. Although her sister is resistant at first, they eventually makeup and have a drink, and the implication seems to be that the sister is going to become part of her life again — but then we never see or hear about her after that, so who knows.

But the main plot point this season that I one hundred percent didn’t understand and totally hated and object to on many fronts is Grace and Frankie being sent to a retirement community. (This is also where the Nick plot line wraps up for now — he goes to see Grace in the home, making their age gap too obvious, and Grace pushes him away what seems like once and for all. Nick, to his credit, never seems to mind their age difference.) Grace had knee replacement surgery and is struggling to get up the stairs. Frankie takes Faith for a drive and ends up in Mexico after following an ice cream truck. These things, paired with various other gaffes on their part, convince their children to convince them to sell the beach house and go to a retirement community. The Hanson kids go to Frankie and tell her they need her to go because Grace needs to be in a home and won’t go without Frankie. The Bergstein kids tell Grace that Frankie needs to be in a home and won’t go without Grace. The ploy works, and they end up in a retirement community where they super don’t belong.

Meanwhile, Sol and Robert are at the same stage of life. They have this massive house that they apparently maintain. There’s never any discussion of putting the men in a retirement community. I get the concerns toward Grace and Frankie being on their own, but it just felt so wildly sexist that this was a plot for Grace and Frankie and never even a fear or consideration for Sol and Robert. It was weird and infantilizing, and while certainly the general idea of this part of getting older and potentially needing care where you didn’t before is a complicated, seldom discussed topic worth engaging with on this show… This was a weird, weird way to do it. It comes on quickly and suddenly and it seems like the kids go from “maybe we should pay a little more attention to what Grace and Frankie are doing since their ability to function seems somewhat hindered”  to “Grace and Frankie are incapable of taking care of themselves” immediately. 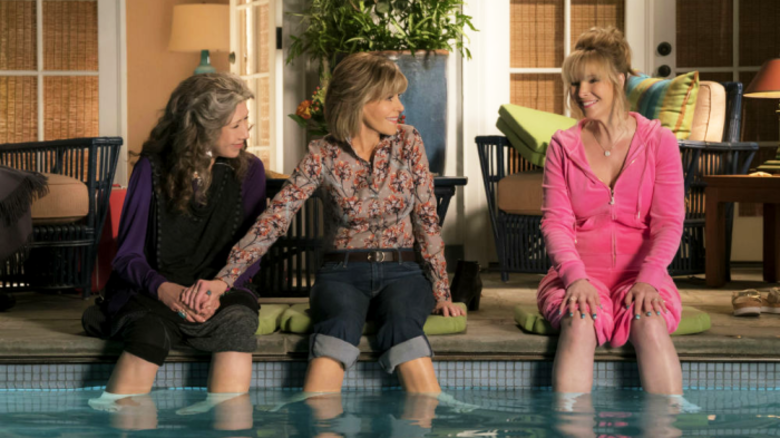 There are other things that contribute to this. Grace gets scammed by a contractor and all the copper pipes are stolen from their house. Grace also almost gets arrested for being drunk in a hardware store and driving a mobility scooter into a cop car (a HIGHLIGHT in the whole history of television, to be honest). Frankie is generally a spacey weirdo, so like, I get where this all comes from. But it just seems like their kids pole vaulted over several hundred steps before “retirement home.” Not that that also isn’t a conversation worth having on Grace and Frankie — the kids prematurely ‘retiring’ their parents so they don’t have to put the work into helping them, because that’s something that happens, and it’s sad, and it’s a problem, but that doesn’t seem to be the case here. Brianna, Mallory, Coyote, and Bud are constantly engaged in their parents’ lives, and there generally doesn’t seem to be a problem there. I don’t know. I really like the idea of broaching this topic on the show, but the way it was done was sloppy and egregiously sexist, and I felt like I was missing something. Some piece of the plot that made it less bizarre and abrupt. Some conversation between characters that revealed this as a commentary rather than a really bad choice on the part of the writers. But I didn’t see any of that, and it really marred this season for me.

At the end of the season, Frankie and Grace escape the retirement community, and make it back to the beach house, only to see a “sold” sign in the yard. It’ll be interesting to see where Grace and Frankie goes from here, if it goes from here. In short: this season was enjoyable because everybody in it is delightful, but the overarching plot was questionable at best and fairly offensive at worst, so in the canon of Grace and Frankie, this season probably goes at the bottom of the pile.