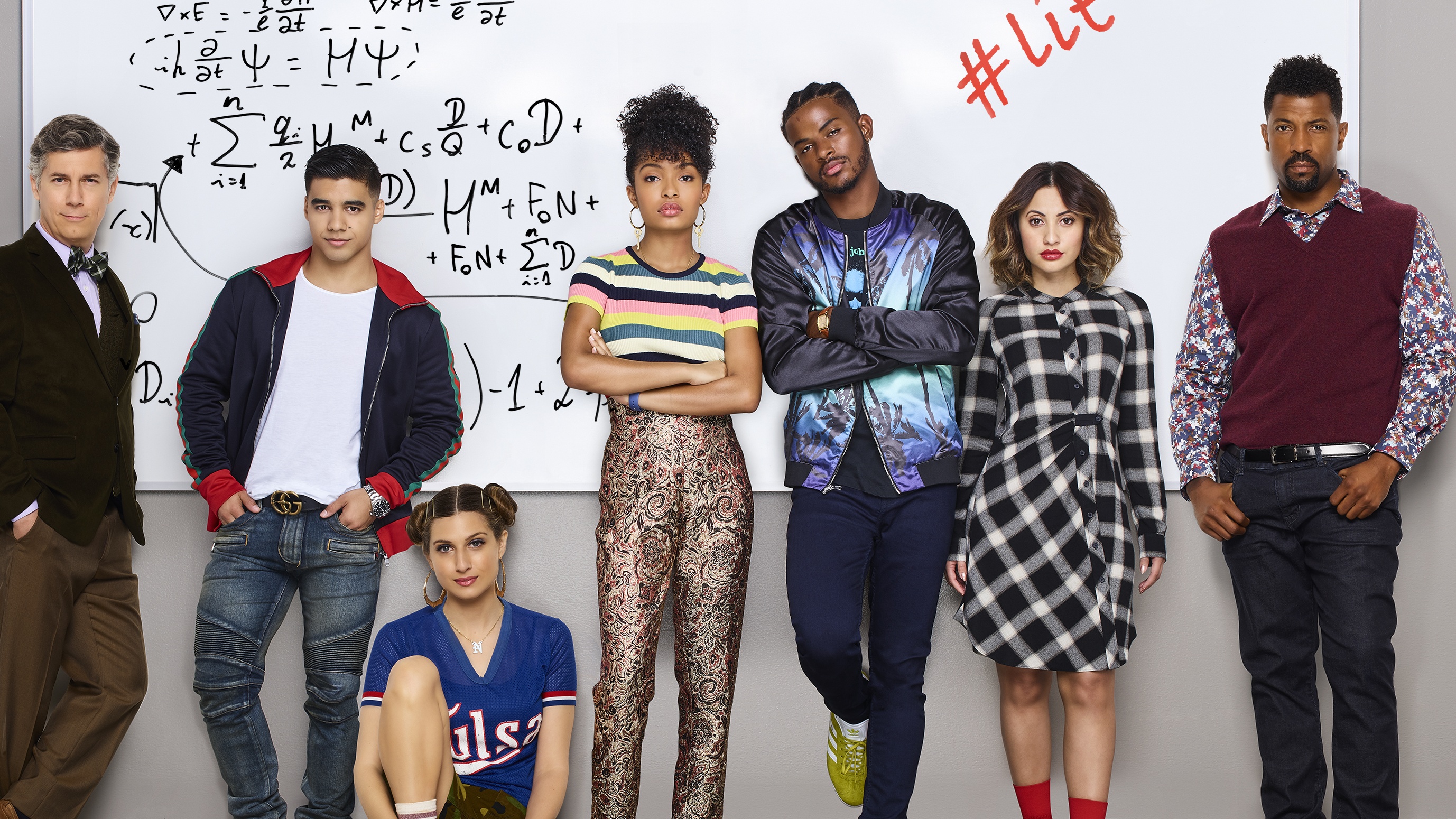 Before watching Grown-ish, the first Black-ish spinoff featuring Zoey going off to college raises a lot of cliché red flags. Is this show going to be another feel-good sitcom where all of the students sit around a campfire at the end of every episode singing kumbaya? Sure, Yara Shahidi effortlessly glows and has as she calls “perfectly threaded eyebrows, but is she funny and charming enough to carry an entire series on her own? Would this show go more Degrassi or Boy Meets World? In reality, none of those things.

From the jump, Grown-ish quickly establishes itself as a more authentic representation of the modern college experience. Sure, there are some elements of hyper-realism, this is a show after all, but subjects like drug abuse, coping with leaving the nest, and hooking up are explored in a way that feels relatable for today’s Gen Y. It may not be as in your face as Skins, but this show still manages to toe the line between progressive and proper.

At the beginning of the season, Zoey has found herself trapped in Professor Doctor Charlie’s Marketing Strategies class. Yes, the same Charlie that works with Zoey’s Father who’s often strange and inappropriate. By kicking off the class with drones and terrier puppies it’s clear that he’s not interested in toning it down. This is where we meet the ragtag group of freshmen who are going to be Zoey’s posse. It’s good that diverse casting has become more of a norm in mainstream television, but it’s also important that it feels necessary to the story and just pandering to an increasingly socially aware audience. They’re as diverse as the cover of a for-profit college brochure but written with the same depth as a Frank Ocean song. 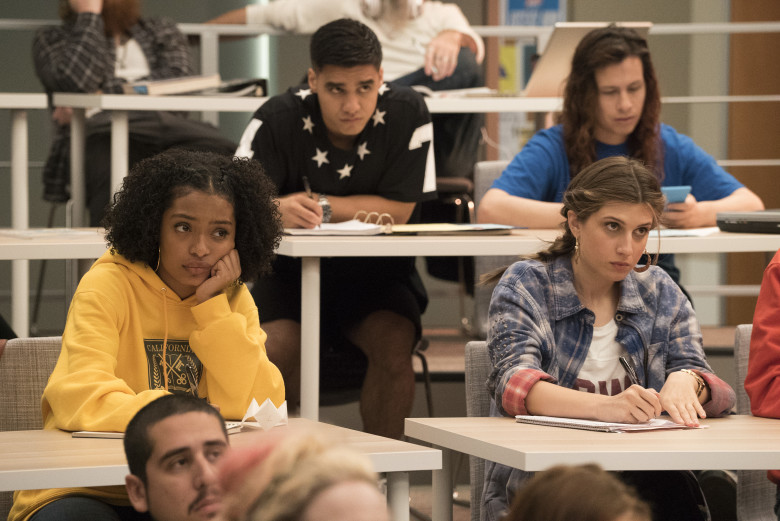 First up we meet Emily Arlook, who plays Nomi. Despite her posh upbringing, she’s a far cry from the cookie-cutter white girl at the front of the class. Nomi is a bisexual Jewish American Princess whose liberated libido is sometimes too much for the show and, maybe even the planet, to handle. In the back row, there’s Vivek, a first-generation Indian and first-generation drug dealer, the track star twins Jazz and Sky, who have to hide their hood roots, and then there’s Luca. He’s the copyright infringement-free reincarnation of Jaden Smith. Naturally cool, carefree, and fashion-forward, Luca is the Ying exact opposite to Zoey’s high-stress Yang. Yes, Zoey likes to act like she has it all figured out, but on the inside, she’s a spiraling mess and she needs someone like Luca to help balance her out. 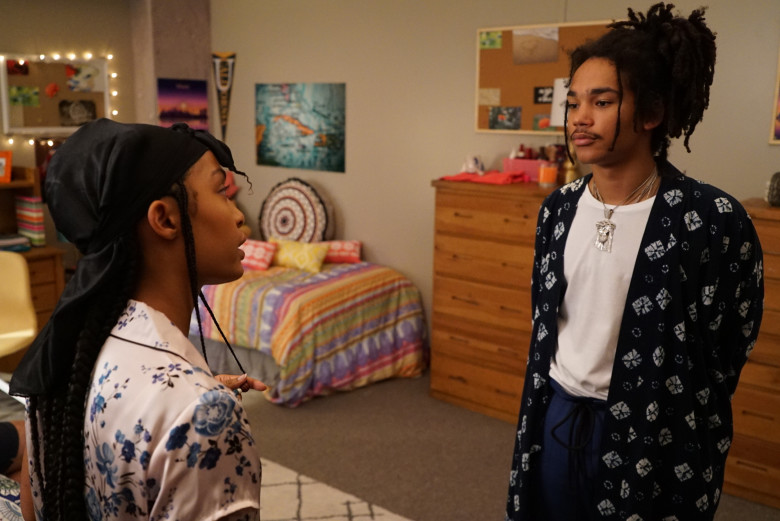 Finally, there’s Aaron, Zoey’s crush. An unproven player who has popped up a few times at on Black-ish. When we were first introduced to him he was the woke bae on campus. Then we saw him again when he stayed at the Johnson house during a music festival. It seemed that he and Zoey’s coupling was inevitable, but dating in college is difficult and their path to bae-dom may not be as clear as it was originally made out to be.

As they go around in a circle explaining how they ended up in Charlie’s night class it’s clear that they all have their flaws. However, no one else’s excuse solicited the same shameful response as Zoey’s. At her first college party Zoey makes her first college decision and as she later realizes, it may not have been the best one. In fact, it caused her to lose her first college friendship with Ana (there were obviously a lot of firsts all at once). Zoey may have conquered high school, but the hill of issues that she faced in grades 9-12 is nothing compared to the mountain of problems that will be thrown at her in higher ed. 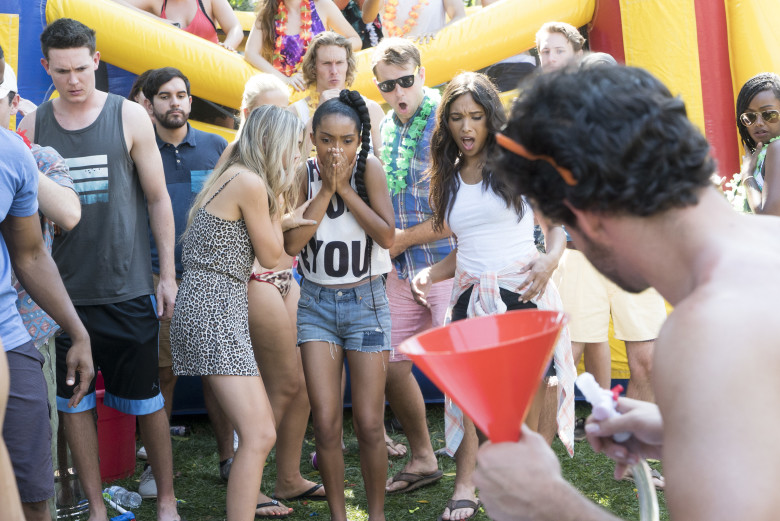 But making mistakes is what college is all about. Just because Zoey is the main character doesn’t mean she will be spared any of the humiliation and awkward moments that everyone else has to endure. In fact, her actions are honestly the most cringe-worthy. Wearing her nativity on her sleeve, Zoey would be thrown to the wolves without her girls holding her hand every step of the way. But just like her character, the show is already smart enough to know that it shouldn’t solely rely on Zoey to carry the entire show, but instead fully embracing its ensemble cast. Not only do the supporting characters have some of the best lines in the show, their individually rich backstories leave the audience wanting more. Overall, it’s safe to say that Grown-ish is aiming to do more than ride on the coattails of its parent show’s success. As Zoey continues to run the obstacle course that is every freshmen’s year at college we’re eager to be there every step of the way.