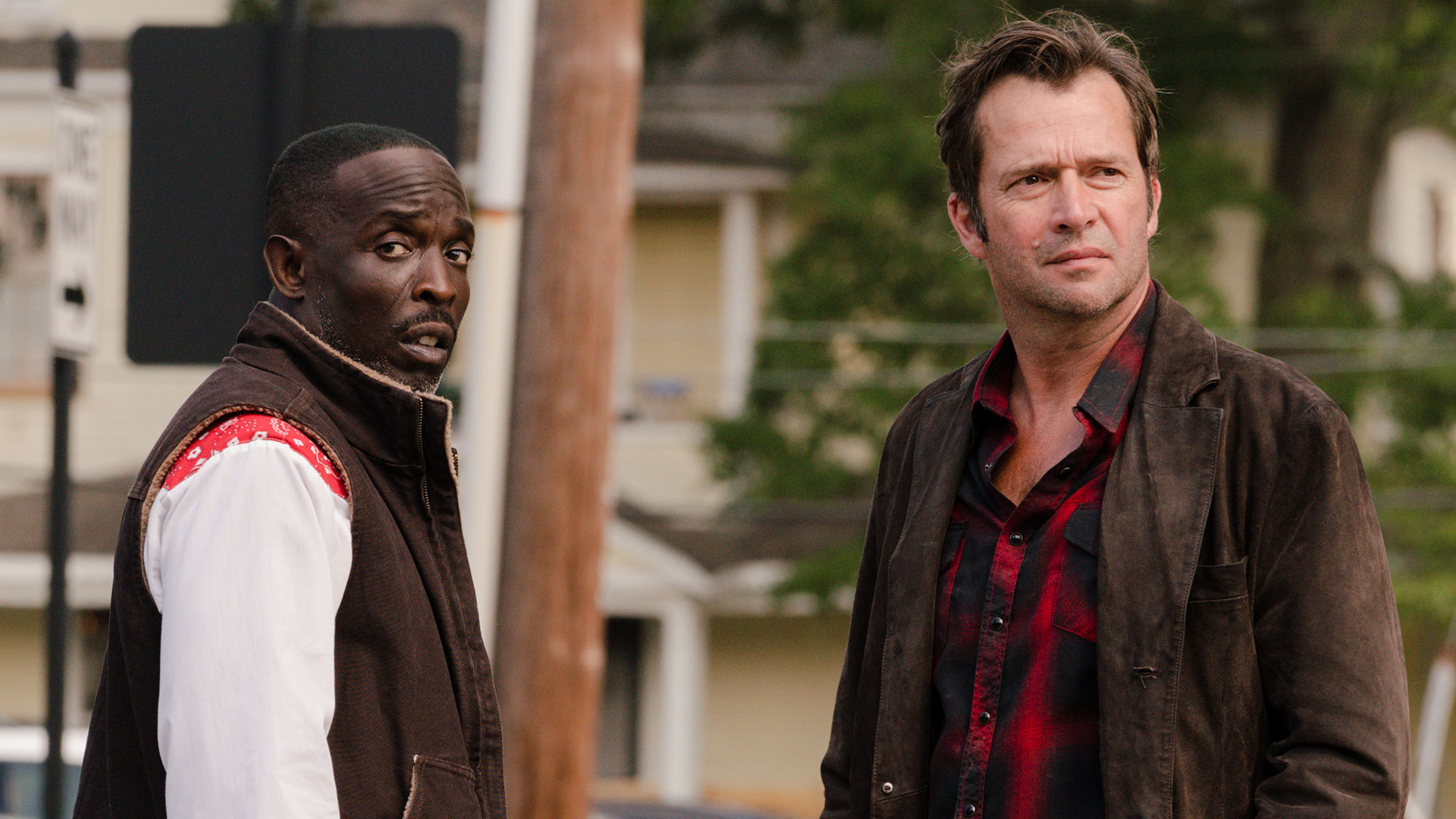 SundanceTV’s Hap and Leonard is finally returning with its third and most promising season yet. The six-episode run begins with “The Two-Bear Mambo,” named after the Joe R. Landsdale novel on which Season 3 is based. This review covers the first four episodes and is spoiler free for the new season; if you haven’t seen the first two, though, beware.

It seems like the creative team behind Hap and Leonard have finally found a rhythm in this third installment. Not to say the first two seasons weren’t good; they were. But never has the show felt so sharp, focused, or compelling. Viewers will also find themselves naturally more invested in the mystery that spurs this season along. Season one started with a missing car full of money. Season two centered on the discovery of a long-dead boy’s body. In both instances, the emotional stakes were on the low side, as dramatic and explosive as those stories grew to be.

But now Florida Grange (Tiffany Mack), Hap and Leonard’s friend/attorney (and Hap’s former flame) has gone missing after visiting a town called Grovetown, known for its long-standing association (and harboring of) the Ku Klux Klan. We met Florida last season and have spent some time with her. We know Hap (James Purefoy) cares for her deeply. This is a mystery we’re immediately invested in, and one that doesn’t take a whole lot of backstory. Things get rolling pretty fast here.

Though it should be noted, the backstory here is very rich. The season opens on the voice of a young girl giving us the history of jazz musician L.C. Soothe, who sold his soul to the devil to acquire his guitar playing skills at a place called Devil’s Crossroads. “Some say the devil never left this place,” the girl tells us. We soon learn that, as legend has it, the devil cursed whoever is listening to Soothe’s guitar, and left a little piece of him in them. Maybe that’s the reason the people of Grovetown are so bigoted and vile to this day. 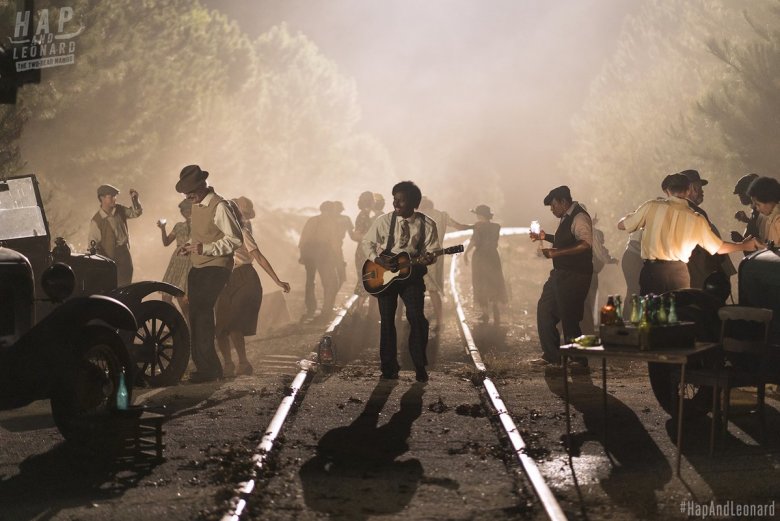 It’s a morbid and foreboding opening sequence. But we’re quickly thrust back into the good old antics of Leonard (Michael Kenneth Williams, the show stealer), who is for at least the third time intentionally burning a neighbor’s home for being full of crack heads. He pours gasoline down the chimney and drops a match like an insane person, on Christmas Eve of all days. Hap happens to be driving up to Leonard’s house just in time to see a flaming crack head go running down the street. Soon enough, Detective Charlie Blank (Douglas M. Griffin) is cuffing them both and taking them down to the station; Leonard for arson and Hap for aiding and abetting.

There, Detective Hanson (Cranston Johnson), who had been dating Florida, pulls Hap into his office. He tells him that the two of them recently broke up, as Hanson is trying to work things out with his wife; he also has children to think of. Hap’s ears, of course, perk up here. But the reason Hanson needs Hap? He wants him to go find Florida who has mysteriously vanished after going to see a client in the villainous Grovetown. If he can do that, Hanson will let both he and Leonard out of jail that night.

Of course, Hap agrees, and soon the two are off on their adventure. Once they actually get to Grovetown, things really pick up and the brilliance of this season’s storyline starts to shine. It’s a thrilling experience, watching them meet the memorable cast of characters here; the show has never introduced new characters as well and as intriguingly as it does this season in Grovetown. And the new additions are incredibly strong. Corbin Bernson really stands out as Chief Cantuck, the man who calls Grovetown “his town” and may or may not be in on the coverup of the missing Ms. Grange. Andrew Dice Clay plays radio DJ Sonny Knox, one of the last people to see Florida; her client, Bobby Joe Soothe (Theodis Ealey) discovered a previously unheard recording of his grandfather L.C. Soothe that may be worth quite the pretty penny, and Sonny was a potential buyer. (Bobby Joe’s fate is revealed long before Florida’s, and the two seem to be intertwined).

There’s also Louis Gossett Jr., playing a diner’s short-order cook named Bacon, the one African American whose life does not seem to be threatened by the very white townfolk of Grovetown, and who may know more than he lets on. Laura Allen plays Officer Reynolds, a particularly racist cop partnered with Officer Sneed (Evan Gamble, returning) who does everything she can to make sure Hap and especially Leonard are not welcome in Grovetown. There’s a whole slew of other characters we meet around Grovetown but I don’t want to ruin anything for you. Just know, at least in the first four episodes, it’s a wild ride. 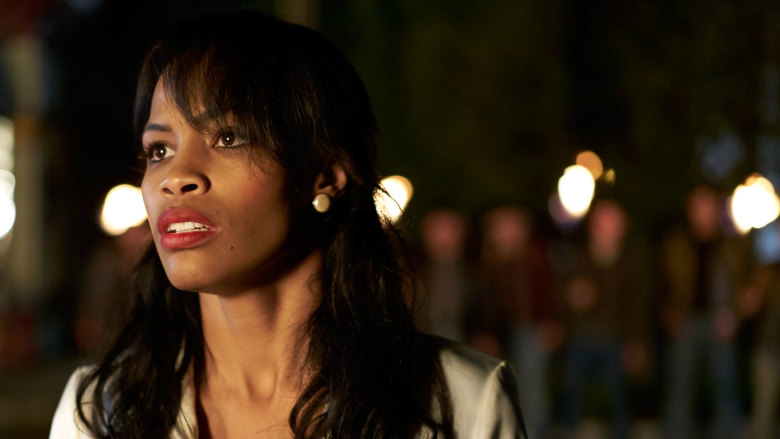 Though it isn’t without its imperfections. At times things can weirdly swerve into the cartoony. It takes you out of it. Things like Hap and Leonard goofily riding a tandem bike to escape some bad guys. Or Detective Blank lighting his cigarette of the still-flaming flat top of a man burnt in Leonard’s arson incident. At one point in the second episode, when surrounded by some roughneck racist types at the diner, Hap and Leonard jump into a schtick claiming to be “Government Exterminators” in town to hunt down deadly “Christmas ants.” Leonard suddenly changes his accent to that of an African one, claiming to be a Dr. Pakumba. It’s played lightly, for laughs. But that’s the type of thing I’d rather the show pull back on. Everything needs a touch of humor in it, and don’t get me wrong, there are more moments that had me laughing out loud here than any previous season. But sometimes it can be a little jarring, especially in a season so effectively pulling off dark and atmospheric.

We also get more glimpses into our two lead characters’ heads than we ever have before, and it was something I think the show desperately needed. A motif built into the season has us constantly inside Hap’s dreams. In episode three, Leonard is confronted in the mirror by a past version of himself; the one that served his country honorably in Vietnam, and the one disappointed in his present self for how he has turned out.

All in all, the series seems to have matured and has really found a way to tell a gripping tale while incorporating invigorating new cast members into the fabric of the show. If you have been sleeping on this series (as many have) or are waiting for someone to insist you watch, here it is: do NOT miss Hap and Leonard Season 3. Oh, and you’re gonna want some Nilla Wafers handy for snacking while watching. You’ll thank me later.