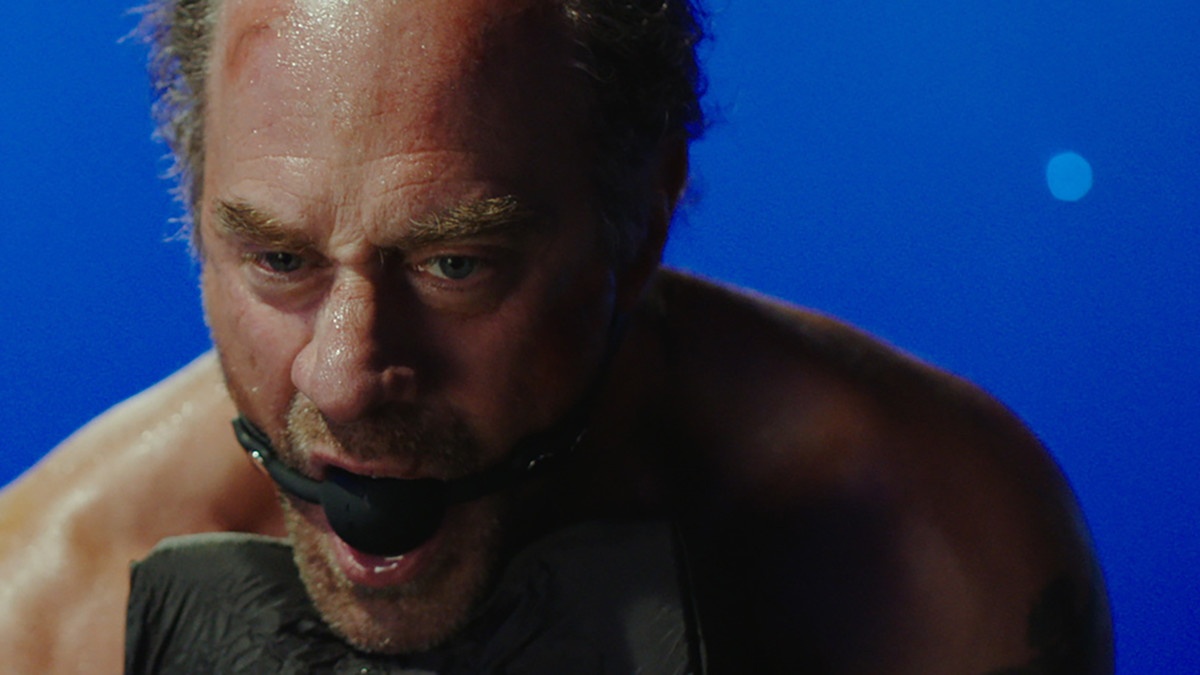 Happy! pushes its weirdness to “Destroyer of Worlds.” At this point, we know this show isn’t afraid to dip a little into the canine frequencies, I’m just thankful they didn’t have the freedom of premium cable to really stretch the visuals. The narrative remains strong; a child is still missing, in the sinister hands of brutal and nefarious adults. Her mother, Amanda, continues to question, press, and push. Her estranged father attacks suspects like a quick death sentence. Even her imaginary blue unicorn recently gutted a nasty raspberry colored imaginary dog.

Sax kills all of Blue’s hench inside the garage, but there’s another chapter waiting in the driveway. He ties Blue’s wife to the front of him and Blue’s creepy son, Gerry, to his back as human shields to cover his escape. He is currently a man of singular priority. Blue’s outdoor hench don’t seem too concerned about keeping Mrs. Blue safe which is like telling Sax it’s okay to fire when ready, and he does. There’s a walking, scooting firefight, Sax wipes out all the baddies and manages to keep Mrs. Blue and Gerry alive through the whole thing. She tells Sax where to find Blue and lets her take his car.

Gerry finds Sax’s detonator and throws the switch. Sax watches the fireball in his rearview mirror as he speeds away. Chalk it up to cosmic justice. On the other hoof, Happy does not feel right about his first kill. Sax tries to comfort him, but he can’t even recall his own first kill. He lets Happy enjoy the comfort of a quick cuddle, then they get back to the business of rescuing Hailey. A few minutes later, Merry runs Blue’s car off the road. Merry is ready to kill Blue now that her mom is dead. She’s surprised to find Sax behind the wheel, but it’s the right time to team up. She’ll help him find Hailey and the other kids, but Blue must die too. 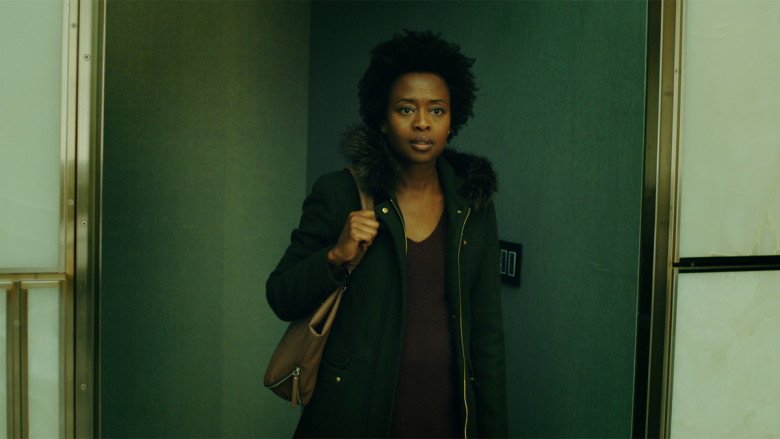 Blue shows up with his goons at Isabella’s house. They argue about Mikey, Isabella knows Blue was behind the deaths of the three other boys too, he hated them and is un apologetic. She tough talks him, he gets angry and shoots the reality show producer and one of her friends. Blue threatens his sister, but she doesn’t flinch, then he gets a call from the beetle that issues his orders.

Isabella runs off to check in with her elderly gypsy friend. Mikey is home, but he isn’t the same and something else with a deep Latin speaking voice is driving his body around. The gypsy woman mutters something about the old Don giving Mikey an Orcus to deliver to Blue. I won’t spoil this one, it’s worth a few minutes of Google. Orcus, for this context, lean towards the Italian explanation. She also says something about Blue’s soul unraveling like a ball of twine.

Amanda drops in on Sunny Shine to ask for help searching for the eight kids that went missing in and around his “Holiday Wishtacular.” He’s a jaded entertainer and claims to be high on some exotic cocktail when she explains when Hailey was abducted. He lures the kids in with wishes. How diabolical can you get? Amanda leaves when she realizes he’s useless, if not complicit. Then, he tells his security to make sure she doesn’t leave the building. Mr. Shine is also the green beetle that ordered the eight kids for Christmas morning. 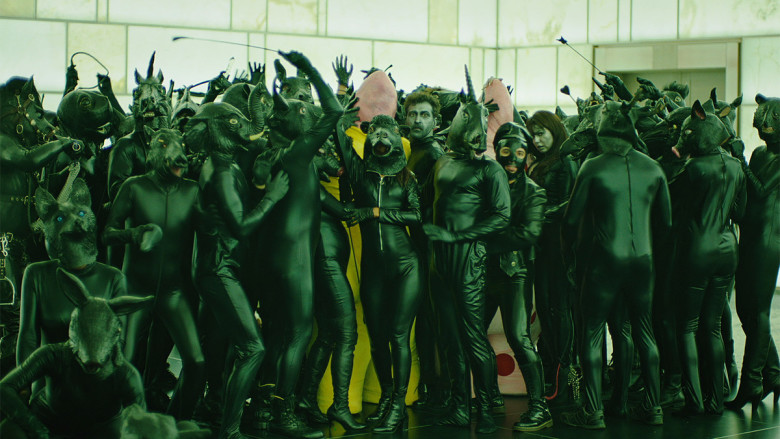 Amanda catches the building security stalking her and looks for a less obvious way out. She manages to get a call out to Merry and warn her and Sax that Mr. Shine is hunting her. Amanda also walks in on a weird bug and animal themed fetish party. Who has this sort of time in the afternoon? That said, it isn’t the weirdest thing in the episode.  Smoothie, it’s your turn at bat!

The security crew wrangle Hailey and the other kids after their brief escape. Smoothie gives them a short monologue about adults socializing to mindless obedience, but Hailey cuts him off. The youngster has skills. Smoothie orders the hench team to package the kids up in these life-sized doll boxes. Still like five miles from reaching the weirdest destination.  Smoothie catches a glimpse of Sax on the security cameras. He tells the hench to load up the kids while he deals with Sax. 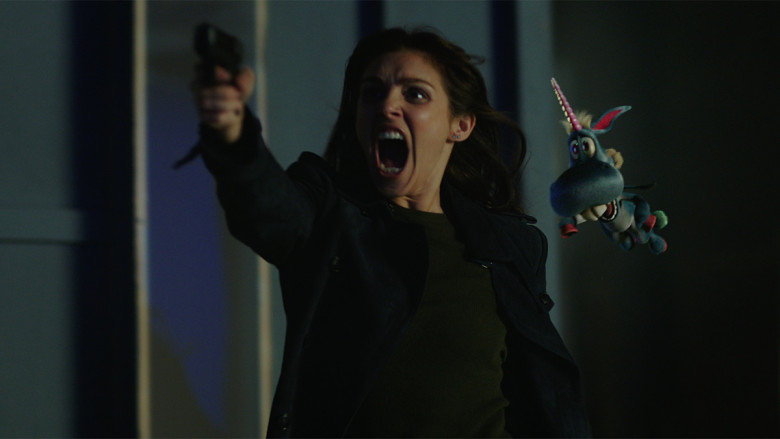 Smoothie preps an ambush in his classroom set and Sax walks right into it. Smoothie knocks him out. When Sax wakes up, he is naked, cuffed backside up on some sort of sex saddle Smoothie has staring down the lens of a video camera. He gives a Sax a brief monologue which ends with the question, “Ever wonder why they call me Smoothie?” I can admit it, I wondered, and now I’m paying for it. Smoothie drops his pants to reveal a whole lot of nothing; smooth between the legs as a kid’s action figure. Then, he gags Sax and straps on a high-tech penetrator. Sax has nowhere to go.

Merry rushes in, guns blazing. She hits Smoothie in the face, maybe the eye. She also shoots off most of the device, but Sax needs an assist getting it all out. We don’t see Smoothie die, but Sax and Merry attack Blue at the loading dock just as the truckload of kids is driving away. Sax chases down the truck while Merry goes after Blue. His red Christmas sweater snags on a razor wire fence and Merry follows the yarn right up to him. She’s mad, but we don’t see her kill him either.

Sax catches up to the truck, the driver is killed but the kids seem to be okay. Hailey is the only missing, but Sax finds a clue; Very Bad Santa’s sock mitten puppet was left at the scene. As much as I’m curious about the Orcus and want to see Mr. Beetle go down, I’m really glad that Happy! circled back to the nasty Very Bad Santa. Next week, the season finale.