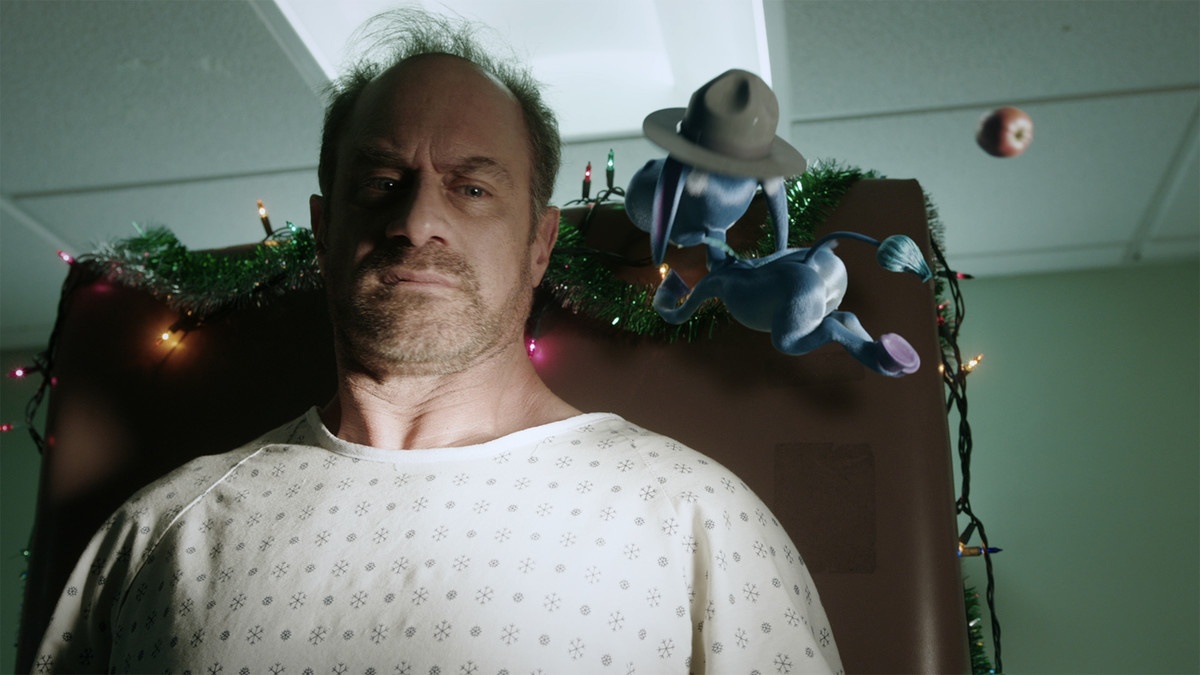 Happy! flies off to get help and returns with grungy, drunken, psychotic “Saint Nick.” This production is jammed with fanboy bait. There’s been a recent but steady migration of U.K.’s greatest comics creators over the past few years. Mark Millar is on his way to becoming his own film industry, Garth Ennis, and Neil Gaiman have also found solid footing on the home-screen. If television can offer Garth Ennis a home for his characters, then there’s room for everyone. Enter the 4th degree Jedi of modern comic narrative, Grant Morrison. Any arguments? We3. Argument over, Morrison wins. He’s just part of the behind the scenes magic, adding to the sorcery, a VFX team out of Glasgow, Morrison’s hometown.

Then there’s Chris Meloni. He has the long and distinguished SVU pedigree but he’s also been scratching his comedic itch for years. With Happy!, he fires all chambers, a full three dimensional, off the rails, cursed character. “Saint Nick” begins with Nick Sax coughing blood into urinal ice at a urinal bar. He fantasizes about blowing his head off and dancing (literally) through the shower of blood with a team of suicide-fantasy dancers. A few minutes later, a motorcycle courier delivers an envelope with his next target. 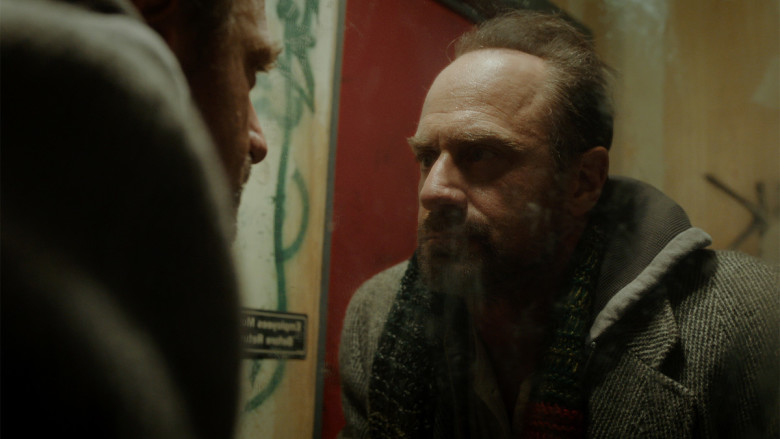 Sax, once a hero cop, works for the mob in the execution business. Tonight, he has a group hit to accomplish. Sax isn’t the kind to go after them man by man, he figures out a way to get them all at once. Meanwhile, the second wheel of the story turns. Amanda Hansen drives her young daughter, Hailey, to see a live kid’s show, Mr. Sonny Shine. Also along for the ride, her imaginary friend, a flying, blue unicorn named Happy. The show is packed with parents and their children. Hailey gets separated from Amanda when she pulls away to get a better look from some place less crowded, a back stage/alley area. We don’t see Happy, but we hear him warn Hailey to go back quick, he sees danger slightly before she does. That’s a new wrinkle in the imaginary friend game, awareness of something the actual human doesn’t see.

There is a serial kidnapping, Very Bad Santa, peeing in the shadows. He grabs young Hailey and takes her back to his creepy lair where he has several missing children boxed in wooden crates. Then, he lights up and relaxes on his nasty comfy chair. Hailey is stuck but Happy flies off to find help, someone with special qualities, someone that actually sees and hears him. 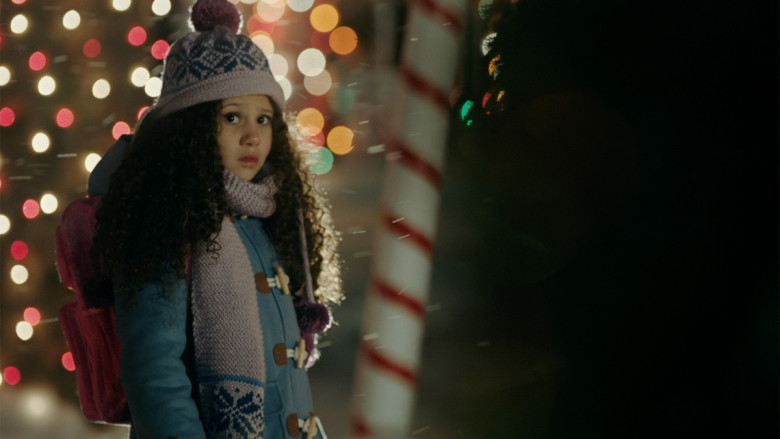 Sax walks in on a Holiday Hooker blowing a man in an air filled lobster costume. The man is about to kill her with a claw hammer when Sax puts one through his suit and his evil soul. This is just phase one, he tells the Hooker she owes him one. A little later, four well-armed Scaramucci boys head up the stairs. Three of them were offered a hit by their uncle, Frankie “Blue” Scaramucci. Nick Sax is their target. They convince little Mikey to go with them. Mikey has just returned from Don Scaramucci’s funeral and he is a little spooked.

The four men burst in and see the Holiday Hooker blowing a guy in a chair, they all open fire and re-kill the lobster freak. Sax steps out from the shadows, explains he sent them the hit to bring them together, then he kills the three he was contracted for. Mikey shoots Sax, but he’s wearing a vest. Sax debates killing Mikey, he can tell the kid is scared. Mikey says he has something valuable to trade, before the Don died, he told Mikey the password to his special computer files. Sax doesn’t really care, he shoots Mikey out the third story window, but he can still hear him moaning below. Aside from being shot in his vest, Sax is also suffering a heart attack. 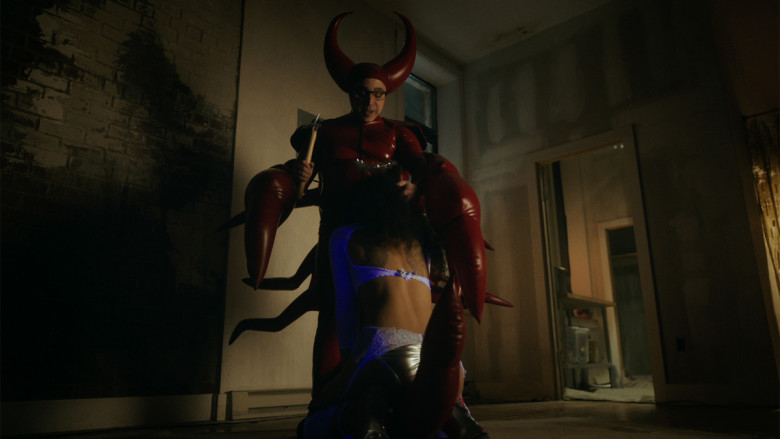 Sax stumbles to the street to finish Mikey who confesses something about “devils that look like people” then, tells him the password and dies. A moment later, Sax also collapses. Sax wakes up in the ambulance and forces the medics to give him a special recipe of drugs for pain and his heart. This is when Happy sniffs him out and joins him. Sax can see Happy, but no one else can. He comes off crazy as well as angry. The detective who identified Sax, Meredith “Merry” McCarthy calls Frankie Blue and informs him his four nephews were killed but one of them told Sax a password. Blue could care less about losing his nephews, but he wants that password. Blue sends a creepy torturer, Smoothie, to the hospital to get it form Sax.

Sax doesn’t believe Happy is a real thing as Happy tries to convince him he needs to help Hailey. Happy gives Sax a warning that five bad men are headed down the hall. Sax believes him, but he passes out before Smoothie arrives with his crew. Sax wakes strapped to his bed, Smoothie ready to torture the password out of him. Method is nasty and involves two main characters; a tiny circular saw versus a sleepy drunk penis. Happy motivates Sax to fight back, he breaks loose and destroys the four hench, but Smoothie gets away. 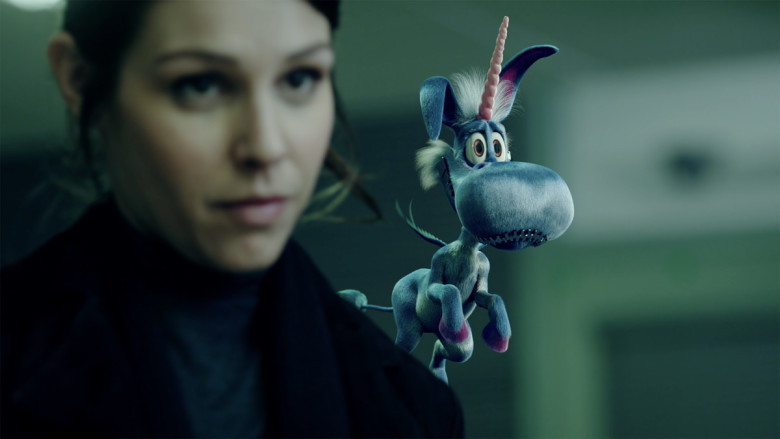 Sax runs across Det. Merry in the parking lot, she gives up her car so they can escape. Happy still hasn’t convinced Sax to help rescue Hailey, then he tells Sax she’s his daughter. This was a solid pilot episode and gives great hope some weird and vicious story ahead. Morrison is a master of weaving metaphysical into narrative and it appears he joined a production capable of realizing both his vision and story affect.