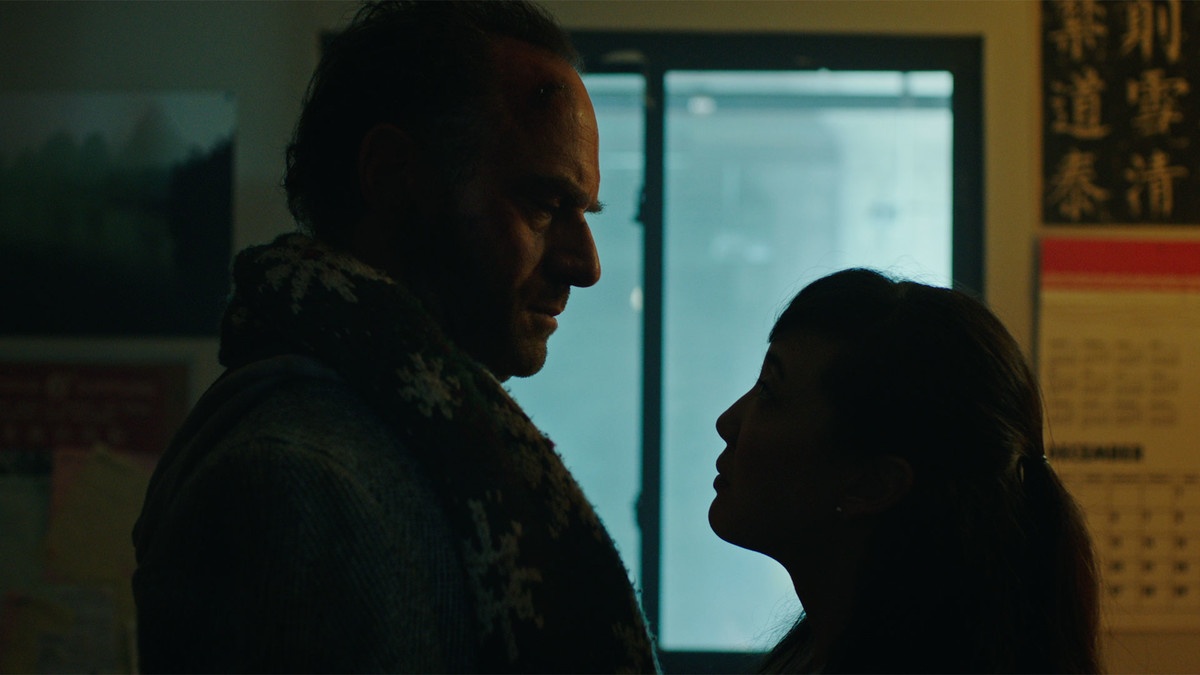 Happy! guides Sax through the fortunes of Chinatown for “Year of the Horse.” This week, we learn a few more interesting things about our little blue unicorn. Hailey took some Mandarin lessons at the “Y,” so Happy understands a little too. We also find out why Very Bad Santa can see Happy like Hailey and Nick. While VBS is switched to kid sock-puppet mode, he grabs the imaginary horse and swallows him. Then, just as VBS is about to kill Sax, Happy makes VBS vomit him out. VBS can see and touch Happy because he believes in him. Belief is the key.

VBS runs off when he hears sirens approach but he leaves a clue in his pool of vomit. There is a fortune-tag with the name of the local company that baked it. Sax heads to the fortune cookie factory and questions the management; maybe they know where that specific fortune cookie was sent? The fortune cookie manager takes her business seriously and keeps meticulous records, she gives Sax the address of the restaurant where the specific fortune cookie was sent even though he’s nasty and abrasive about her beliefs. I get Sax has been hurt, who hasn’t, but does he have to be nasty to every single person? I’m actually worried he will find Hailey and say something life-damaging. So far he proves correct, she’s better off without him. 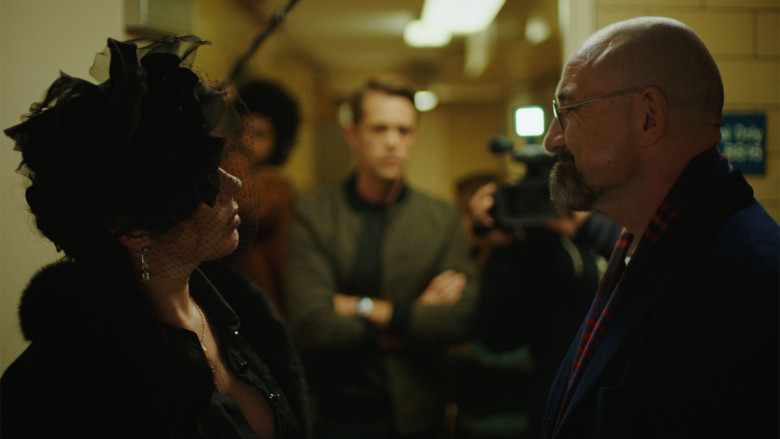 This week opens a whole new story-pocket for Blue and the Scaramuccis. We knew the Scaramucci boys had an uncle, Blue likely paid Sax to take out the trio, Mikey was just in the wrong place. This week, we meet the slain brothers’ mother, Isabella. This Happy! world comes with its own popular “housewives” type reality show, “Secrets Of My Sussex.” Isabella Scaramucci is one of the featured players and the sudden murder of her four boys is the focal point of recent shows. Camera crews follows her to the morgue and other places. They capture her on camera with Blue, but pixel-filter his image and audio filter his voice for broadcast.

Blue isn’t comfortable with her camera crew but she doesn’t care. Isabella blames Blue for their deaths. At first, she says he’s responsible because it was his duty as the uncle to look after them. However, she seeks the solace and advice of an elderly Italian woman who communicates with the dead. She tells Isabella, three of her boys are together but they warn she has a traitor in her house. When Isabella asks about her fourth son, the woman says Mikey is no longer with them. 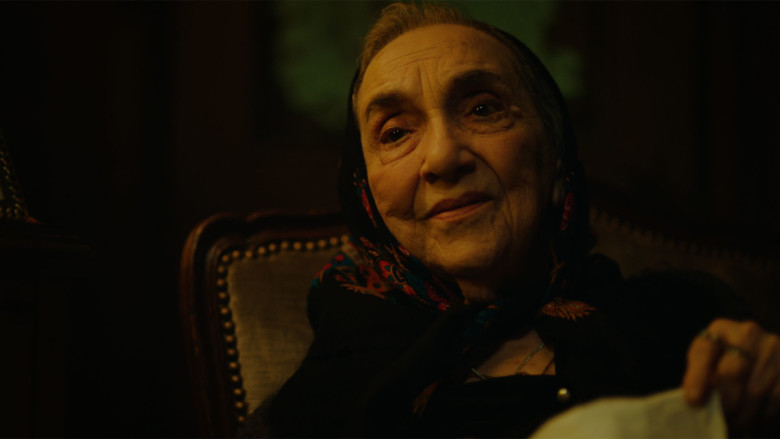 Isabella rushes to the morgue and confirms, three of her boys are still on slabs but Mikey’s corpse is missing. Meanwhile, Blue gets summoned to see his boss, some creepy guy that dresses in a beetle costume. Beetle hates the attention Isabella’s show brings to Blue and wants him to deal with it quick. He also orders him to move the children soon. Blue hired Very Bad Santa but we don’t know why. We know Beetle wants the children for something, but we don’t know if each individual child was targeted or if VBS just had to hit a certain number. I’m interested in this bad guy world and want to know why Mikey was so freaked out but I also want to see Isabella return as a continuing antagonistic force.

Amanda and Merry continue to question parents filing recent missing children reports but who haven’t received their creepy Christmas cards yet. Though Merry gets frustrated, it pays off when the scooter-delivery guy rolls up right next to them with another card. He acts tough for a few seconds but Merry and Amanda can torture with the best of them, they promise to spoke his fingers right off his hands with a hard twist of the throttle. He confesses he gets the cards from a dead drop. Merry tells Amanda she must do this next part without her. 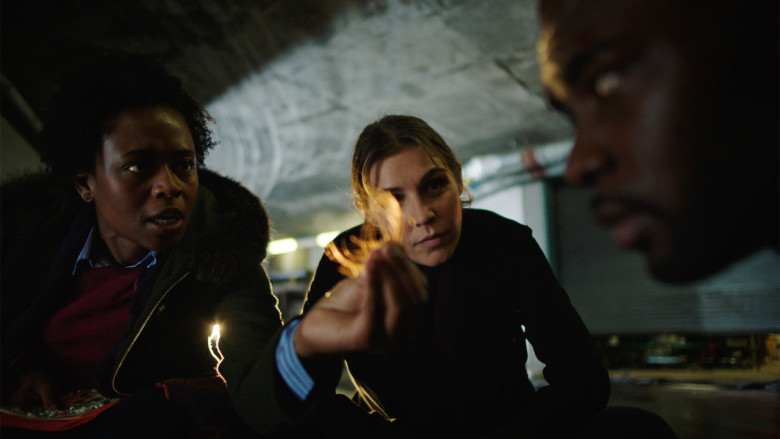 Happy feeds Sax enough Mandarin to get his questions across to the restaurant hostess in Chinatown, she tells him to wait on the delivery-boy. Meanwhile, some Triad adjacents recognize Sax and know Blue wants the passwords from him. They report to their Triad contacts. The delivery boy returns, he remembers the nasty Santa Sax describes and says he usually ordered in huge bulk deliveries. He figured the guy to be some sort of human trafficker, but doesn’t remember the exact address of the building. Sax makes the delivery boy show him where the building is but Triad assassins kill the kid with a knife meant for Sax.

Sax fights his way out of Chinatown Triads which is its own miracle, but he gets disoriented looking for the building. He’s ready to give up but not Happy. The little blue horse performs a “Hope Dance” which just makes Sax angry. Then, there’s a flash of light and Sax sees a sign on top of a nearby building, GIMBEL BROTHERS. The place where a crazy Santa once committed suicide. Sax breaks into the building and Happy is confident it’s close to where he was when Hailey sent him to find a hero. Sax trips across Merry, also searching the building. She stabs him in the leg with a pair of scissors in a small scuffle but they find Very Bad Santa’s lair together. As dirty as this world is, no one gets infections? VBS left a cigarette smoking in an ashtray but he is gone and all the crates that held children are empty. Hailey tries to comfort the other kids as VBS drives away in a delivery truck. How will Happy and her hero find them now?