HUMANS isn’t about humans.  Or is it?

The protagonists are all human-looking robots.  Their distinctive trait is neon green eyes.  One has gone rogue – Niska (Emily Berrington).  (BTW, I’m sure she gets mistaken for that girl from “The Lady in the Water” – Bryce Dallas Howard.)  AnyTwho, she’s gone rogue in an effort to discover her purpose as a conscious robot.  It’s assumed that she’s behind many other robots becoming conscious all over the world.  One of them is Hester (Sonya Cassidy). Hester becomes conscious while carrying a heavy barrel in a factory.  Her instinct is to run, so she does. She is discovered by another emancipated robot, Max (Ivanno Jeremiah), and a human, Leo (Colin Morgan).  They explain that what she’s experiencing is not a malfunction and that many others have become conscious, too.  As they are all trying to figure out why this is happening to a selective group, they are on the run from humans who want to capture and/or kill them.  These humans must have some vested interested in them.  I’m sure some are manufacturers while others are big businesses who rely heavily on robot labor.  And there may be others who have an undisclosed stake.  One of the robots is shot in the head by an unknown sniper.  Who is she and why didn’t she just as easily kill the other robots?  Her precision is outstanding, but she noticeably hesitates when it came to the others.

There is a huge need for robots in this world.  They are not only factory workers, maids and nannies, but they are financial advisers and business managers.

Joe (Tom Goodman-Hill) is laid off from his job.  He was replaced by a robot.  According to his boss, the robot is more cost-effective.  Joe insists that his role involves building and maintaining relationships.  How can a robot relate to another human being when asking a human being to work late when s/he has a family?  As a  response, the robot spews out the kids’ birthdays of one of their employees.  Tsk, tsk.  In a world where efficiency is king, relationships are sacrificed.  If this is the future of my real world, then I want no parts of it. 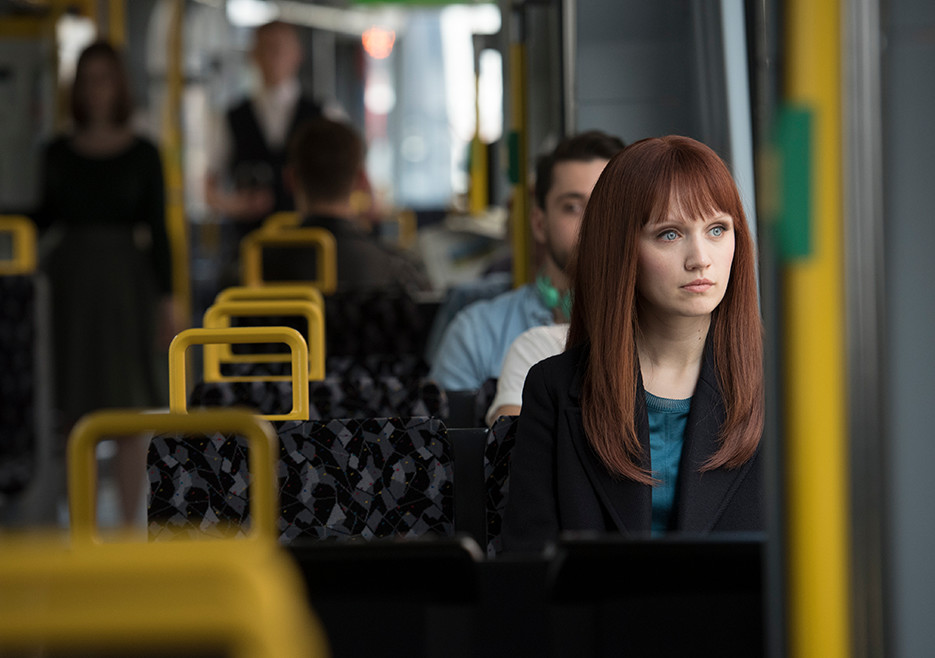 We all see the infiltration of artificial intelligence in our everyday lives.  Check out the check-out lines at the grocery store.  Who wouldn’t rather go to self-checkout?  Keep in mind that at least one person was left go because of that technology.  If these self-checkout stations were replaced by androids, then every single human at that store would be gone.

“Humans” makes you think about the impact that that kind of ai has on the human worker.  To keep things in perspective, it has to be said that these androids threaten middle management and below.  The ones who benefit the most from ai are the “1%”.  So, putting two-and-two together, I’d say that they are ones who want to keep the robots unconscious.  It’s more profitable that way.

HBO’s “Westworld” imprisons its androids in a theme park, where visitors can do whatever they want to them – rape, murder, love, befriend, etc.  And the androids’ memories are wiped cleaned everyday.  That is torture.

“Humans” operates in the real world.  Its androids are also imprisoned, but it’s mental.  They behave in stereotypical robotic ways.  No emotions.  No consciousness.  No nothing.  They’re created to help human beings with whatever they want.  As they gain consciousness, they have to figure out their purpose.  With no human master, they are forced to navigate the world with other newly-conscious robots. “Humans” also incites the question: How can you be alive and not have a purpose? Although I was reminded of “Westworld” a lot while watching this episode, it didn’t make me long for “Westworld”.  “Humans” adds to the philosophical ramifications of ai.  Their characters are unique.  Their new struggles, desires, and purposes are enough to make me want more.  It’s also satisfying to see androids in Bolivia, San Francisco, Nottingham and other parts of the world.  The accents are thrilling!

I am excited to go on this journey with all the characters.