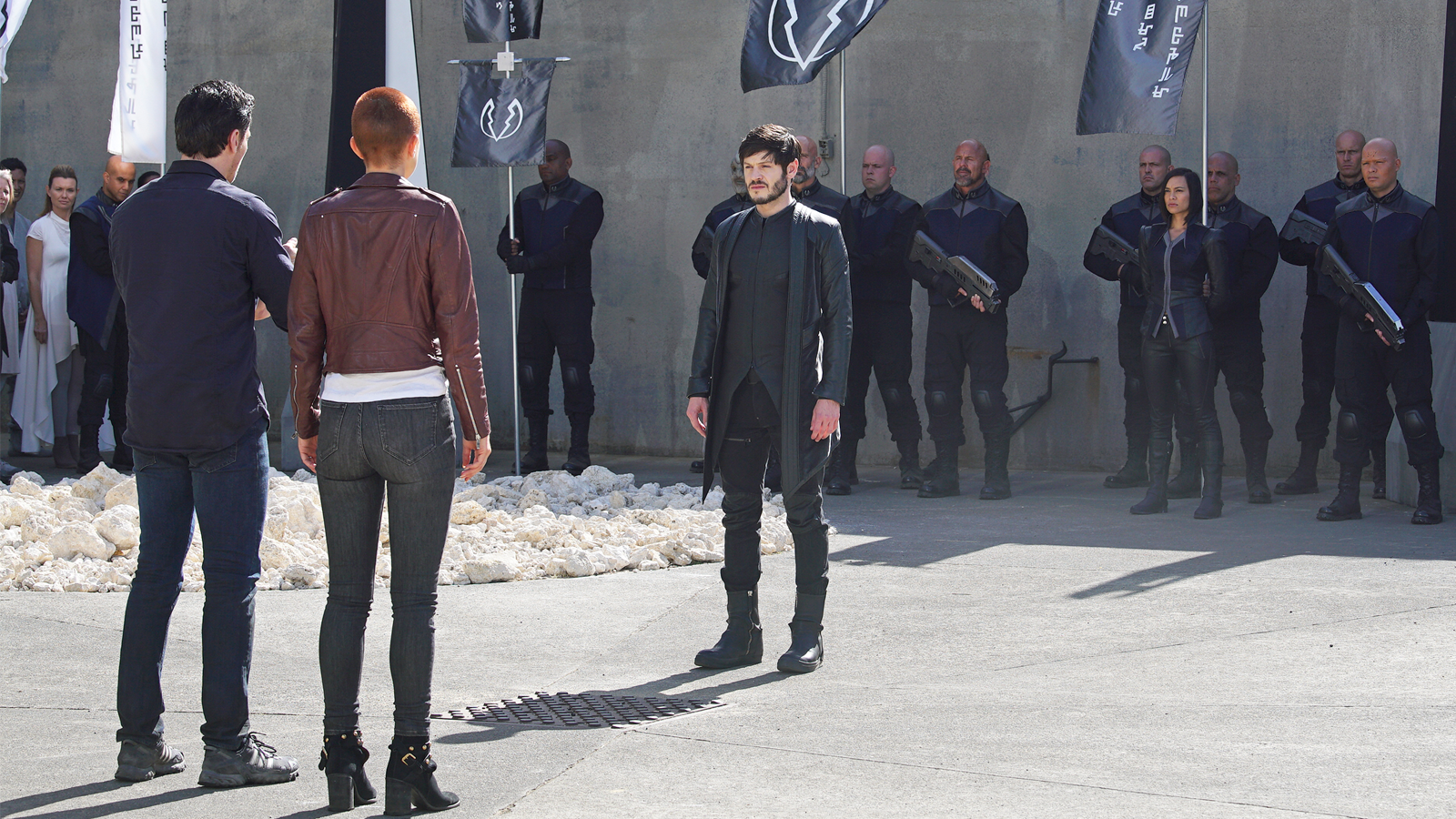 As I was watching “Havoc in the Hidden Land” the seventh and penultimate episode of Inhumans, I caught myself wistfully saying “I wish there were more commercials and less show.” Inhumans continues to be insufferably bad. None of the issues I’ve had with it since the beginning have been addressed and they just keep piling on more. I’ll try not to repeat myself, but goodness it’s difficult at this point. The basic “plot” (I use the word loosely) of this episode is that Black Bolt and co go back to the moon to confront Treacherous Brother and he cheats them out of their bargaining chip because they are stupid.

The thing that strikes me worst about this episode is how suddenly Medusa is positioned as a moral arbiter. Medusa has no right or authority to be championing these positions. She has spent this entire series shouting at people and storming around declaring how much more important she is than everyone else. Her time on earth did not change her and the switch from entitlement and anger to entitlement and judgey preaching doesn’t work well. She still mostly shouts at people, believes in her own superiority, and never establishes the kind of pathos or empathy required for her to sound genuine instead of condescending while she lectures everyone about mercy. She’s also given a role as Black Bolt’s conscience and emotions which, even in a show this bad already, infuriates me in its bald sexism and objectification. She is nothing but the function she serves for the man in her life. Ugh. 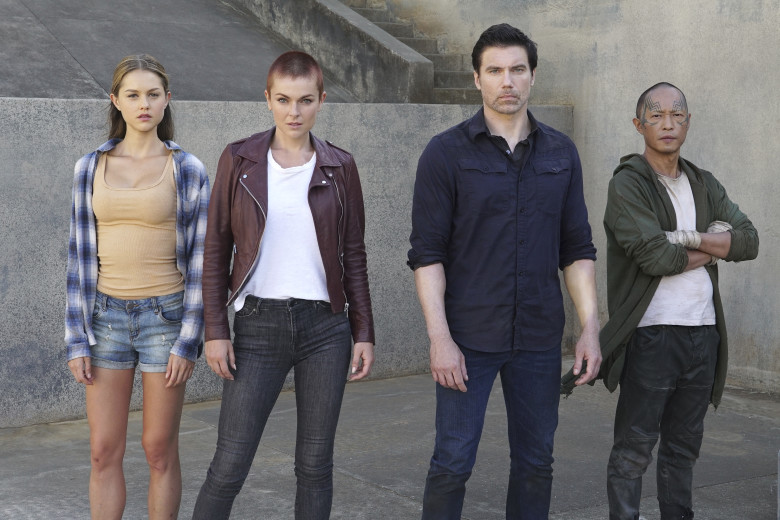 Another thing that drove me so crazy I kept having to pause the show until I calmed down was the sudden reappearance of the Green Man from the first episode. This series opened with this dude running through the forest and leaping into the sea. We saw him for about thirty seconds tops, never learned anything about him, and then he was gone. Now he’s back and we’re apparently supposed to care. Whatever, I’m unfortunately used to the terrible writing. What bothers me even more is that in all the shots of this character his makeup is awful. It’s either coming off in patches, missing on parts of his lips and eyelids, or sliding off his face. What the hell? You can do better with $2 Halloween makeup than they did for this television show.

The production value of Inhumans has always been an issue but the longer I have to look at it the more annoying it becomes. It seems like they didn’t even teach any of the actors how to fight. Slow motion is used in Tattoo Man’s scenes, not because it’s cool, but because it appears to be covering up the obvious lack of stunt work. Most of the fight scenes are so intercut it’s enough to give you motion sickness, all because they didn’t put any visible effort into making this series even halfway decent. This shouldn’t surprise me given how bad the writing is from start to finish, but for some reason the low production value is something I still find shocking.

Most egregious to my sad, battered soul is how stupid and slapdash the “science” of this series is. One of the things that made me fall in love with the Marvel Cinematic Universe on the whole was that everything is explained so well in-universe and grounded so realistically in mostly plausible science that all of the powers and gadgets work. They are functioning and important pieces of the plot that can pass between the different texts because, overall, the continuity is well-policed over the whole story. Inhumans doesn’t care about any of that. The science words that they say aren’t just awful in the context of the MCU, they’re downright idiotic in the context of reality. Every time the series leads up to a supposedly “shocking” reveal I want them to cut to Coulson walking in with his posse and shouting “show’s over! We’re locking you all in containment!” That’s my dream ending for this nonsense at this point. 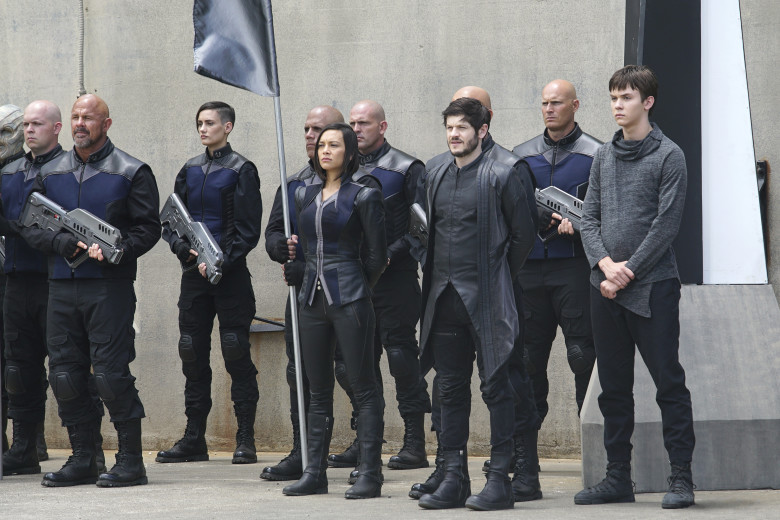 The ridiculous example of terrible science from this episode is the decision to use the loose, unexplained research on terrigenesis to try to resurrect someone. There are so many reasons to not bring someone back from the dead, let alone the way they’re claiming it can be done here. First of all, Minotaur Man has been dead for like a day or more. His brain is mush now. That’s a terrible idea. Second of all, if being exposed to terrigen crystals makes Inhumans undergo terrigenesis every single time, risking insanity and addiction, then Daisy Johnson and a ton of other Inhumans we know should be completely out of their gourds at this point. Third, seriously, everything they described is so poorly thought out that it’s complete garbage but if you really want someone who can help you with all your Inhuman science needs, again I say I’ve got two people who can do that for you a lot faster and a lot better. Fortunately, both Fitz and Simmons have enough moral backbone (in this particular reality) that they wouldn’t use their research for nefarious purpose. I’ll just imagine they took one look at this, flagged it for investigation by like the CIA or something, and ignored it. Fourth, the garbage tag on the end implies that Minotaur Man has returned from the dead as some kind of angry, violent, monstrous black man. Sigh.

Honestly, I think what I feel worst about is how much I hate all of these actors now. Iwan Rheon I know from Game of Thrones, so I know that this horror at least is not his fault. The other actors I’ve never heard of so I can’t tell if they’re all terrible or if the writing is just so atrocious that nothing could save it. As it is, this isn’t something I’d think anyone would be proud to have in their reel. They all need to have serious talks with their agents.

One more episode and then we are free.