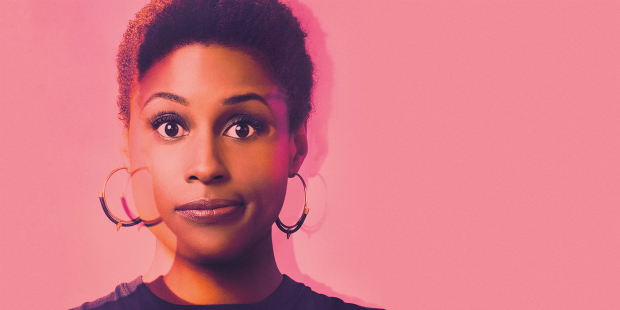 This week’s quote comes to you by the guy playing Jesus in Molly’s friend’s cousin’s play: “Why has thou forsaken me? You said you was faithful, but you a lying ass b***h.”

Let me point out that this week’s episode of INSECURE, “Guilty as F**k”, was directed by the venerable director Debbie Allen herself, and it showed. I was in my feelings for the entire 30 minutes.

Sidenote: Is anyone else disturbed with how dirty Issa’s car is? We continue the saga of Issa’s messy story with Issa returning home to Lawrence after sleeping with Daniel, looking guilty as all heck. She finds out that Lawrence was able to track down and delete her “Broken P***” video, and she breaks down at his kindness. She does not, however, tell Lawrence what she did. Oh boy.

The rest of the episode, Issa overcompensates for her guilt by being an ultra-girlfriend. Meanwhile, Daniel and his Twitter fingers continue to check up on Issa. Issa’s façade backfires on her when Lawrence takes her to a jewelry store to look at… RINGS. Issa flashbacks to her deceit, leaving Lawrence confused when she books it out of the store. Unable to hold back her truth, Issa tells Molly what she’d done with Daniel. Molly tells Issa not to tell Lawrence and to move on – it was a mistake that he doesn’t have to worry about. Issa arrives home, attacking Lawrence passionately and presumably sealing away her secret forever…that is until Lawrence stumbles upon her phone, seeing the texts from Daniel. Molly and Jared reconnect over Cookie Crisp, and in the blink of an eye, are screwing again. Their renewed relationship seems to be going well until Jared reveals that he’s had a sexual experience with a guy in the past. Molly shuts down, questioning Jared on his sexuality. After she brings it up to her friends, Molly is convinced that Jared is gay. They debate about black male sexuality and sexual fluidity. Issa convinces Molly not to get stuck on her fears and to continue seeing Jared. Unfortunately, Molly can’t get past it and breaks up with Jared. This episode made me awfully sad ya’ll, and it’s actually pretty hard for me to get emotionally involved in television shows. This speaks to what I mentioned in the last review – Insecure does reality really well, and boy, the realness of this episode hit me like a ton of bricks. Insecure loves grey areas, and here they have me actually rooting for a character who’s actions are pretty damnable – although I wonder if I feel this way because it’s a female character doing the shady business instead of the guy… HMMM. Anyhow, the situation is tough. While Issa should be a decent person, she and Lawrence are finally experiencing bliss, is one mistake going to erase that? While it’s easy to shout at television characters to do the right thing, in reality the choice between being a good or trifling person is herculean, and chile, it’s always easier to be trifling.

With that in mind, it was almost relieving for me when Lawrence finds the text messages from Daniel. I’m like a concerned, free-range parent with these characters: Yeah, I’m real disappointed in Issa, but I see her side in things and truly believe that she’ll learn the hard way and grow on her own. Based on Lawrence’s discovery, it looks like that’s going to happen sooner than later. Thank the Lord. After everything comes to light, Issa can go sit in the corner and think about what she’s done. So here’s the messy question this episode asks us: if it’s a one time thing that you regret and will never happen again, should you tell your partner? I mean, you might want to yell out YES  (and I agree), but keep in mind that Issa and Lawrence were finally in a good place, Lawrence has a great job prospect, AND he was close to proposing to her. Would the average person have the moral strength to potentially throw that away by admitting to a mistake that will never happen again? Yeah, you could say the decision is easy, but I’m side-eyeing you. Meanwhile, the real solution to this problem is to simply not sleep with past lovers in music studios, but that bridge has already been crossed so…

I loved the black male sexuality debate during this episode. First off, can we talk about how on point the conversation of homophobia and the un-acceptance of male (particularly black male) sexual exploration and fluidity was?  Insecure is making it hard for me not to turn these reviews into thesis papers. All I can say is that Molly being turned off that Jared had a sexual experience with a male years ago isn’t nessassarily right, but her feelings aren’t invalid. I’ve had the conversation before, why is it more acceptable for a woman to explore her sexuality versus a man? Is society’s view of masculinity toxic (short answer: yes)? What are our standards for dating “straight” men, and how do they perpetuate a really jacked up and conservative view of sexuality? Once again, I think Molly may have messed up. While she’s definietly entitled to feeling how she does, the fact that she is so distraught over leaving Jared may mean she made the wrong decision. I’m usually not one to speculate on “what’s going to happen next”, but god do I hope Lawrence leaves Issa. I’m sad because his whole storyline has revolved around keeping Issa happy, and I know it’s gong to cut him into pieces if he finds out what happened, but it’s time. What I’m afraid of happening is that the two of them are so comfortable in the relationship that they won’t recognize that it’s time to break up. Instead, maybe Lawrence will get his revenge and cheat with Tasha. Either way, I’m here for the petty drama.

Alright ya’ll, we only have a few more episodes left of the season. Let’s see what happens….