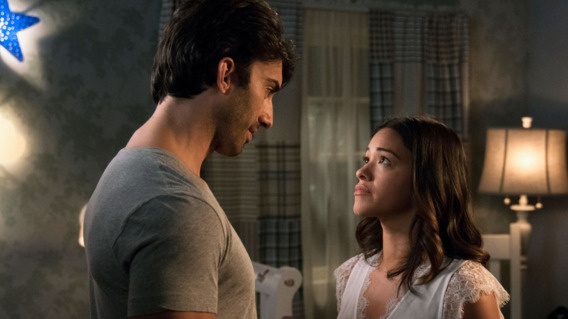 Jane left me annoyed last week. She wanted a little something-something with Rafael, and when she got it, she was like, “nah.” But this week, they’re finally on the same page with giving love between the two of them a try, but it’s not being explored in the traditional way. They’re keeping it a secret.

At the end of the episode, Jane and Rafael tell the whole family that they’ve decided to just be friends. This was especially important for their son, Mateo, who has become very confused about seeing his parents kiss last week. He jumped to the conclusion that now that they’ve smooched, they must be preparing to walk down the aisle. Jane and Rafael confuse him even more with an explanation of the kiss that was more suitable for a teenager, not a big toddler. Because of this explanation, Mateo starts behaving oddly in school, something that Jane and Rafael feel saddened about. And this is why they felt like they needed to lie to Mateo in the end. It would return him to some normalcy. And it would give Jane and Rafael the secret time to explore whether they really should be together.

Although I was initially annoyed that Jane and Rafael have to keep their relationship a secret, I now realize that this could make for some oh-so interesting future storylines. What if an attractive woman enters the picture, she’s interested in Rafael, and Rafael, in order to keep his secret, tells her that he doesn’t have a girlfriend? What kind of dramatic mess would emerge from that? What if Jane has that same situation happen to her? What if Abuela tries to set her up with someone, and Jane keeps deflecting? I mean, if they’re both a secret, can either of them get mad about being in some sticky situations? It’s bound to happen, right?

Speaking of sticky situations, Abuela feels like she may have been the side chick in her last relationship. Abuela turned down her ex’s proposal because she just didn’t love him the way that she loved her late husband. Her ex is still salty about it, and since he is her boss, he is forcing her to work a shift that does not work well for her schedule. At first, she accepts it because she’s not used to him being petty. In other words, she’s always had her way with him, and rightly so. They used to be a couple. But things have changed now. She talks about it with her family and decides that she’s going to confront him. When she walks into the store, she sees him smooching down his ex-lady. Uh-oh. Was Abuela the rebound?

Thinking about that brings Abuela to tears. Xo reminds her that she is the one who broke off the engagement, so what is she crying about? It turns out that Abuela may have a little regret about that.

Rogelio is having some regret, too. The telenovela star decided to be a stay-at-home dad because he just wanted to do something different. His baby mama Darci warned him that being with their baby Baby would require a lot of boring days and nights. Rogelio took that as a challenge, but once the bore really set in, he couldn’t believe it. Darci put the kibosh on him posting pictures of his every second with their daughter, and in doing so, it was like castrating him. He couldn’t figure out how to fill the time. He had done the stay-at-home dad thing for a few days, and right before he was ready to quit, Xo told him that she wanted to quit running the dance studio. As she explained her decision, she said something to the effect of “Well, at least I didn’t do it for a couple days and then threw my hands up in the air. I did it for a few years.” That convicted Rogelio to say nothing about wanting to give up his role as the dad nanny, aka “Danny” role after two seconds.

On the other side of the world is Petra. She is fighting being a suspect in her late twin sister’s death. We still don’t really know whether Aneska was thrown off the balcony or whether she fell from it herself. Petra is claiming the latter, but her new attorney, played by Rosario Dawson, is preparing her for the worst-case scenario. And like Petra, Dawson’s character has an ulterior motive that has yet to be discovered. And guess what her name is? Jane.

Jane, the lawyer, is trying to get a blueprint of the apartment that Aneska fell from so that she can map out the different scenarios that a prosecutor could claim that Petra killed her sister. She was resistant at first, but in this episode, it seems like the two have established a cordial rapport. I think that Jane the lawyer is a lot more like Petra that we think, and if that’s the case, I’ll keep my seatbelt fastened because the ride between them will be fast and bumpy with some twists and turns.

Jane the Virgin continues to keep my attention. I don’t expect it to do anything else.