The second season of Jessica Jones is perfectly adequate. The story is fine. The character development is fine. It’s aesthetically gorgeous. But it lacks the depth and relevance of the first season in a few crucial ways that leave this feeling pretty basic rather than transformative. I am fully aware that holding anything to the standards of the first season of Jessica Jones is unjust. However, Punisher exists, so it’s been proven that repeating that level of greatness is possible. Plus, well, this is Jessica Jones part two. If anything is going to get compared to the first season it’s the second. That said, I’ll try to be lenient.

The most notable difference to me is that, while the first season dealt heavily with Jessica’s internal conflict and trauma, this season is almost entirely external conflict. She’s at cross-purposes with Trish the whole time. She takes Malcolm for granted and uses him. Her new hot landlord spends a few episodes hating her and then immediately gives in. The biggest conflict is, of course, that her (presumed dead) mother shows back up in her life and is actually a mass murderer. It’s fascinating to me that this particular plot is, on the surface, even more personal than the first season’s, yet the execution of it felt distant and impersonal. There is plenty of forward action in the plot, however, Jessica herself doesn’t seem to change at all and we never see her engage with or process the situation. The plot doesn’t engage with her emotions in any meaningful way, it simply strings together events that she must live through which leaves every piece of the story disjointed and disconnected. Trish, Malcolm, and Jessica–while all working on the same case–feel like they’re moving through completely different stories. Even Hogarth had a very odd plotline involving a diagnosis of ALS. I like that she got scammed by someone pretending to have powers and I love that she didn’t actually get a mystical cure to her degenerative disease. However, it felt like Hogarth’s character-focused plotline was just crammed into this story because this is her series of origin. Other than the red-herring cure associated with IGH, she had almost nothing to do with the plot of this season which just contributed to the scattered feel of the thing.

Another key difference is that this season feels determined to rush Jessica back into self-imposed isolation even though the stated “moral” of the story is exactly the opposite. Where once her self-destructive defensiveness was part of her charm, here her alienation of everyone around her often just reads as cruelty. That would be fine if understanding her cruelty was a part of her development, but instead she ends up completely alone except for a character we just met. Rather than growing closer to characters we know and love, her decision to “let someone in” just feels even more isolating because she’s walling herself off with an underdeveloped, one-off character. To be fair, Oscar (her new building superintendent) and Vido (his son) are fine as characters go, but they’re siloed in their own part of the story, have a very rushed relationship with Jessica, and just don’t feel right. Where the first season had her growing closer to people as part of her working through her trauma, this one chooses to have every one of her relationships fall apart. For a character who was self-isolating as a manifestation of her depression and PTSD, I’m just not interested in seeing her go back to that space. 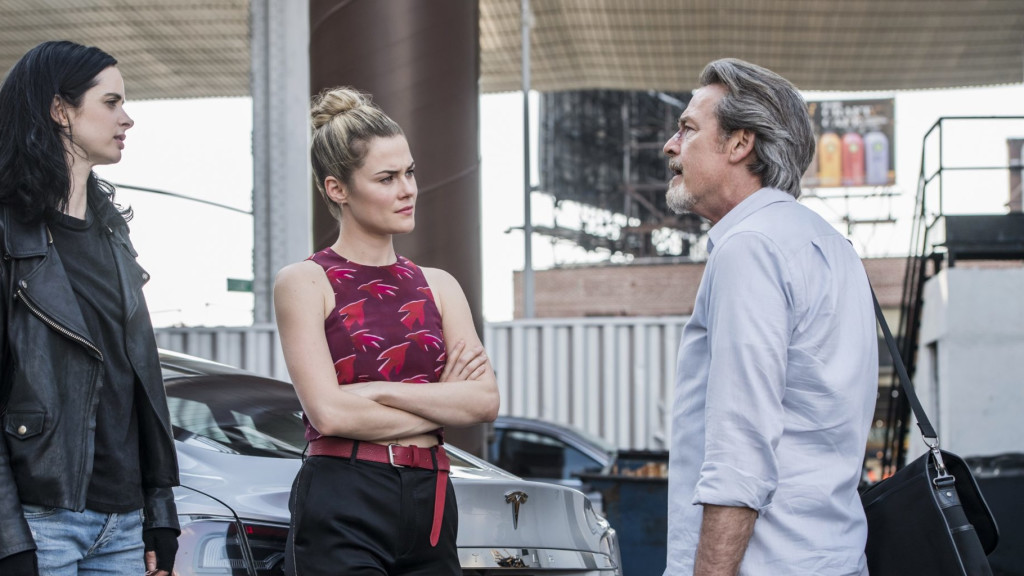 For a few episodes, I thought this season was going to be about the relationship between Jessica and Trish, but it turns out that Trish is just using Jessica for various things and the two of them spend most of the season screaming at each other without actually connecting. Perhaps it’s just that I’m also not interested in seeing Jessica and Trish have such a massive falling out. Their relationship was the bedrock of the first season and their motivations for now hating/resenting each other aren’t developed enough for me to believe them. If that were the actual focus of the plot then maybe, but instead we got the weird mother monster rabbit hole which felt more like a tangent than the main plotline. Trish’s addiction plotline is interesting but not very well explored, and Jessica’s immediate acceptance of her violent mother to the exclusion of all other people is shallow. The only character who speaks the truth and sticks by their values is Malcolm. Malcolm works hard, confronts his demons, tries to help everyone, and eventually sheds his insecurities and is the only character with a truly satisfying conclusion to his narrative. Malcolm is the real star of this season but, unfortunately, he’s also essentially a background player.

I’ve got to get personal for a second because I have to talk about the mother monsters in this season. The first season did an excellent job portraying the destructiveness of narcissistic abuse through a combination of Kilgrave and Trish’s mother. Trish’s mother is the original mother monster of this series, forcing Trish to do her bidding her entire life, using her for her own personal gain, and allowing Trish to reject her mother for her own personal safety. The fact that Trish used to be applauded for not having contact with her mother always made me feel validated and safe when I watched this show. This season shoves Trish back under her mother’s control and seems to suggest constantly that it’s fine because she’s her mother. Trish’s mom is horrific and to have Jessica Jones even skirt close to normalizing that kind of abuse makes me want to vomit. The oft-repeated refrain from this season that “she’s your mother” with respect to everyone’s mom is reductive, destructive, and deeply personally offensive to me. Jessica Jones is one of the few shows I hand myself over to without reservation while I’m watching it. I won’t be doing that in the future.

The thornier situation with regards to monster mothers is Jessica’s mother making a reappearance as an even stronger powered person than Jessica herself. That idea has potential, especially because her mother has uncontrollable fits of rage where she destroys everything around her and then claims she can’t help it. She decides that the only person who can be responsible for her emotions and stop her from killing people is Jessica and tries to force that onto her. The thing is, Jessica makes noise in protest but then ultimately accepts that role. I know that Jessica’s mother wasn’t abusive before the car crash that (supposedly) killed their entire family, but all of the things that she’s doing now are 100% abusive behavior. It’s codependent and narcissistic out the wazoo and the show doesn’t address that trauma, it passively acquiesces. No, no, nopety, no. I don’t care that this woman has been biologically altered and has rages that she can’t control–ceding control of one’s emotions and behavior is an excuse all abusers use and it’s exactly what Kilgrave did in the previous season. Yet somehow, Kilgrave is called out for it while Jessica’s mother is not. Just because someone expulsed you from their body does not make them a mother, it does not absolve them of the harm that they cause, and it does not make you responsible for them or beholden to them for anything. “Mother” is a social designation that needs to be earned through mutual trust, love, and respect. Not through forcing people to do things and then shaming them with obligation. My own mother is an absolute psycho who I will never speak to again and, while I was irked by all of this while I was watching the episodes, my full-blown PTSD nightmares the night after I finished this season told me that there was something seriously amiss in this portrayal. It’s hard to judge if this plot achieves any kind of resolution when the entire thing feels extremely off to me. Examining emotional abuse was what this show was all about from the get-go. To have a story where it doesn’t even occur to the characters that abusive behavior is abusive is baffling. 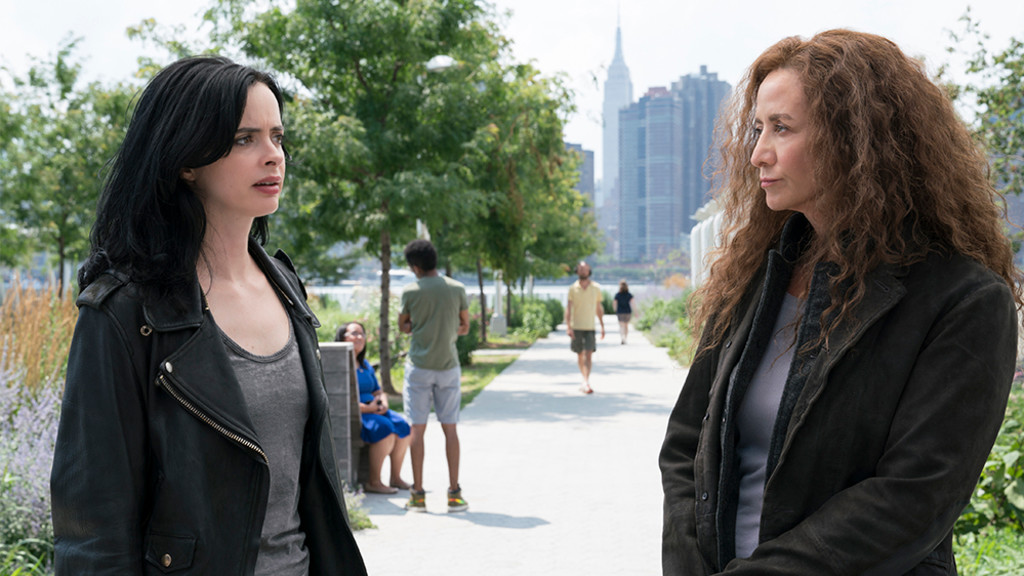 Now, this season isn’t bad, I’m just complaining because I expected more from it. It is Jessica Jones after all, and the first season did literally save my life when I was in a very dark place. I love that Callum Keith Rennie (my favorite Cylon from Battlestar Galactica) made an appearance as the extremely weird mad scientist responsible for Jessica’s powers. (Though I still don’t understand the purpose behind his experiments. He’s not associated with the government or a major corporation, so I guess he was just saving people to see if he could? A completely independent mad scientist with that level of operation is bizarre to say the least.) I loved the consistency of the aesthetics of this season. The establishing shots throughout every episode were all low-angle, tilt-shifted weirdness in the perfect style of neo-noir, and the voice-overs were much more consistent than in the first season. The plot was fine, the mysteries were fine, things moved along adequately. Trish’s history of sexual assault was a nice subtle touch, as was her discontent with her perfect boyfriend. Exploring Jessica’s past and then derailing the story from a conspiracy track to a personal one was an interesting choice that could have been executed better. I liked how Trish and Malcolm were such huge parts of the narrative itself, though that was a consequence of the story being so externally focused. And all thirteen episodes were directed by women which I loved (and which I’m apt to think accounts for some of the stylistic consistency and attention to detail.)

Overall, season 2 of Jessica Jones is perfectly serviceable and adequate. It’s not a disaster like Iron Fist or even a beautiful mess like Luke Cage. But neither is it the kind of transcendent experience of Punisher or its own first season. It’s probably the first Marvel Netflix series that I would deem as simply “fine.”