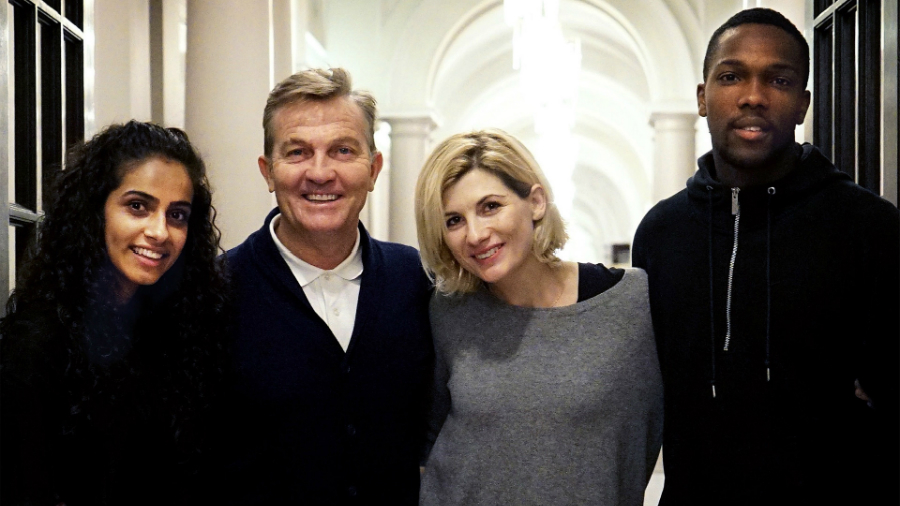 Bradley Walsh, Tosin Cole and Mandip Gill have signed on as series regulars in the new season of BBC’s DOCTOR WHO, supporting Jodie Whittaker, recently announced as the Thirteenth Doctor.

Walsh will play a character named Graham – rumored to be the Doctor’s new Companion, Cole will play Ryan and Gill will play Yasmin.

“The new Doctor is going to need new friends,” said new showrunner Chris Chibnall in a statement. “We’re thrilled to welcome Mandip, Tosin and Bradley to the Doctor Who family. They’re three of Britain’s brightest talents and we can’t wait to see them dive into brand new adventures with Jodie’s Doctor. Alongside them, we’re delighted that Sharon D Clarke is also joining the show.”

Whittaker, the first female Doctor ever, was announced in July, following a full six months of speculation following the January announcement that the 12th Doctor, Peter Capaldi, would not be returning.

The rumored names that emerged over the months included Kris Marshall, Luke Treadaway and Sacha Dhawan. Fans hoping for a female Doctor – indeed, the first female Doctor in the franchise’s decades-long history – floated names like Phoebe Waller-Bridge, Tilda Swinton and Miranda Hart, though hope seemed to be dwindling as rumors right before Whittaker’s formal announcement indicated producers were settling on yet another white male doctor.

The next season of Doctor Who will consist of ten 50-minute episodes, kickcing off with a feature length premiere in the fall of 2018. It airs on BBC in the UK and on BBC America in the US.

Walsh and Cole are represented by Curtis Brown Group in the UK and Cole is also repped by CAA and Sherpa Management.