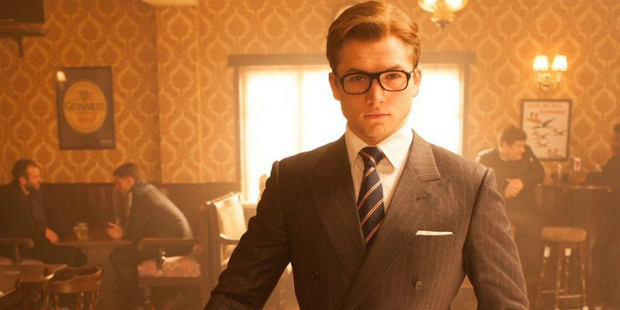 While his first film, Layer Cake, feels like the most down-the-middle genre exercise of his directing career, it is clear that Matthew Vaughn is carving out a name for himself as someone who takes great delight in making films that utterly demolish expectation.

One of the reasons he and Mark Millar seem to have found a kinship as storytellers is because they love starting from a familiar place and then thumbing their noses at the conventions of storytelling. Jane Goldman, one of the sharpest genre writers working right now, brings a very different wicked sense of humor to things, and she’s got a pretty amazing innate sense of structure and archetype. The first Kingsman was a pretty terrific reaction to James Bond movies as well as the more stripped down modern Bourne-type of spy movies, and it felt like a major jump forward for Vaughn as a director.

That’s true of every movie he’s made so far, though. When Matthew Vaughn jumped from producing to directing, it was easy for people to make the claim that he was just making the same kind of films that Guy Ritchie was making and he learned on the job. Each of the movies they’ve made since that split gets further and further apart stylistically, and by now, Vaughn’s honed his own voice enough that his movies don’t feel like anyone else’s. Where Ritchie is all about bombast, Vaughn’s tendency to excess expresses itself in different ways. He loves his unexpectedly graphic violence, for example. If he’s got a bad guy who decides to dispose of a henchman, rest assured you’re going to get more than a mere double tap on a plastic sheet. When he stages an action sequence, he’s going to find the top, go over, and then keep on going and never look back. This is definitely More Kingsman in general, and anyone who enjoyed the first film is going to find a lot to like here. But because Vaughn and Goldman love to play with expectation, there’s a lot of this that is almost like a riff on the way Bond sequels play off of one another. 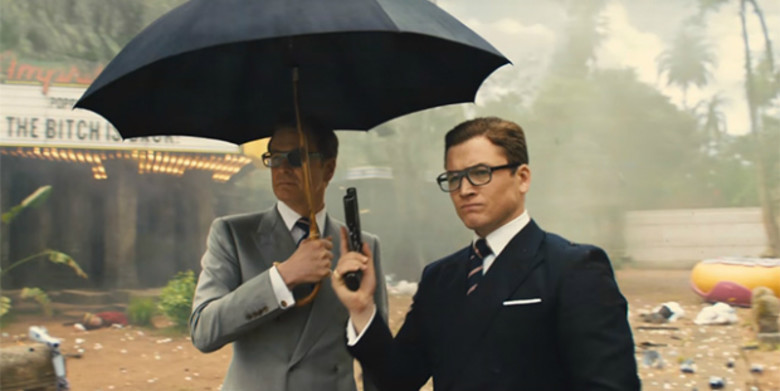 As the film opens, Eggsy (Taron Egerton) has settled comfortably into his role as the new Galahad, part of the Kingsman organization. As he’s leaving the tailor shop that serves as the public face of the Kingsmen, he is accosted by Charlie (Edward Holcroft), who was a rejected candidate from the first film. Right away, I love the way they use Charlie here as a bad guy, giving him a robot arm and a complicated motivation that makes him more than just a disposable snarling thug. The film builds off of scenes and ideas from the first film, showing us different angles on things we saw in the first film, showing us what happened right after moments we saw before, and then paying off what seemed like jokes in ways that are often surprising. For example, there were people who seemed upset by the winky-smutty anal sex joke at the end of the first film, but in this movie, Eggsy is still in a relationship with Tilde (Hanna Alström), his Danish princess, and there’s lots of stuff I didn’t expect but really enjoyed regarding the complications that come from dating someone you saved as part of a secret spy mission. Merlin (Mark Strong) is back as the guy at the desk, and Vaughn’s deep affection for Strong as an actor is evident in the way they write some different colors for Strong, sending him into the field this time.

Without giving away some of the twists and turns that are part of the film’s crazy first half, it’s safe to say that there is no status quo for Eggsy and Merlin, who find themselves cut off from any and all support, their only clue for possible help coming in the form of a bottle of American whiskey from Kentucky. Much of the fun of the first film came from laying out the way the Kingsman organization worked, and this time around, we get to see the way the American branch of that same organization evolved. This gives Vaughn a chance to play some of the first film’s scenes with a new twist. If you’ve seen any of the marketing for the film, then it’s not a secret to say that Harry Hart (Colin Firth) is back despite having died on-camera in the first film. The way they handle that is pure pulp nonsense. The bad-guy plot hatched by the sweet-faced monster Poppy (Julianne Moore) is clever the way the bad-guy plot in the first film was clever, and I wish the Bond films featured villains who had such clear-cut and interesting goals. It’s so much more interesting than just a vague “want to rule the world” sort of villainy, and I think there are some intriguing and scathing ideas put forward here. 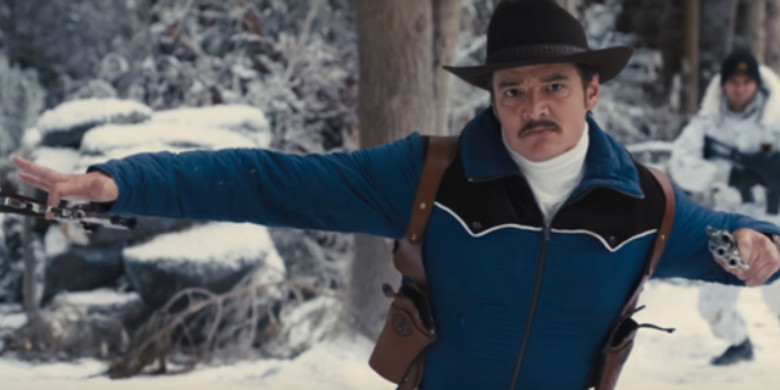 The film sidelines some of the most interesting characters, unfortunately, and anyone who buys a ticket for either Jeff Bridges or Channing Tatum (*) may feel slightly duped by the movie’s trailers. Pedro Pascal has more screen time than the two of them put together, which isn’t entirely a bad thing. Pascal’s made the most of his Game Of Thrones heat, and I think it was a bold stylistic decision to have him play his entire part as Burt Reynolds in the year 1978. If you were secretly hoping that Hooper ended with Burt at the controls of a fighter jet, then I have great news for you. I was hoping for more of Sophie Cookson as Roxie as well, but I have a feeling I may have to wait for a third film for that to happen. If anything, the film is overstuffed with good ideas. There’s an entire running celebrity joke in this film that will either make you laugh consistently or annoy you from the start and how you feel about the film may hinge in part on how funny you find that joke. There’s also a joke in this film that is so sexually graphic that I heard actual gasps from some of the people seated around me. I can’t believe Vaughn got away with one of the images in the film and I laughed at how audacious it is even as I winced at it.

George Richmond’s photography creates a sense of direct continuity between the two movies, with certain visual ideas here that are direct reactions to scenes in the first movie. He is great at finding clarity in moments of chaos, something that is very valuable when you’re shooting action as manic and wild as some of the sequences here. I love the Henry Jackman/Matthew Margeson score and the Kingsman theme in particular. When we hear “Manners maketh man,” followed by that orchestral sting, we sort of know what’s coming… but the fun is watching how they twist that and surprise us. This is how I like my movie sequels, determined not just to give us more of the same but keenly aware that “the same” is exactly why people buy tickets to sequels. It’s a tricky balancing act, but it feels like Vaughn and his ongoing gang of collaborators enjoy that challenge.

The year of John Denver continues with an entire motif built around “Country Roads,” and honestly, it’s one of those weird coincidences that so many films are leaning on Denver and the sentiment attached to his work this year. It’s just one of the many delights that make this one work. The original Kingsman was more than just a clever riff on James Bond iconography, and the sequel continues to flesh out this weird, wild world of super-spies and oddly moral supervillains. As long as they’re going to work this hard to entertain, I am all for further adventures in the Kingsman series, and for whatever other flavors of pulp Vaughn turns his acerbic sensibilities toward in the future.

Keep up with all of Drew’s reviews here.