According to executive producer Steve Levitan (Modern Family), LA to Vegas is meant to be a nod to classic comedies like Cheers and Taxi, which were all set in a workplace.  The pilot was written by Lon Zimmet (who’s written for Happy Endings and The Unbreakable Kimmy Schmidt) and was based on experiences he had traveling to and from Las Vegas to play poker on weekends before he became a writer.  The excitement of flying to Vegas on a Friday juxtaposed with the dour, depressed, and hung over passengers on Sunday, sparked the idea that this would be the ideal setting for a comedy.  The problem with LA To Vegas is its premiere episodes lack the excitement and hilarity of what made something like Cheers so compelling to watch, and that’s rooted entirely in its characters. 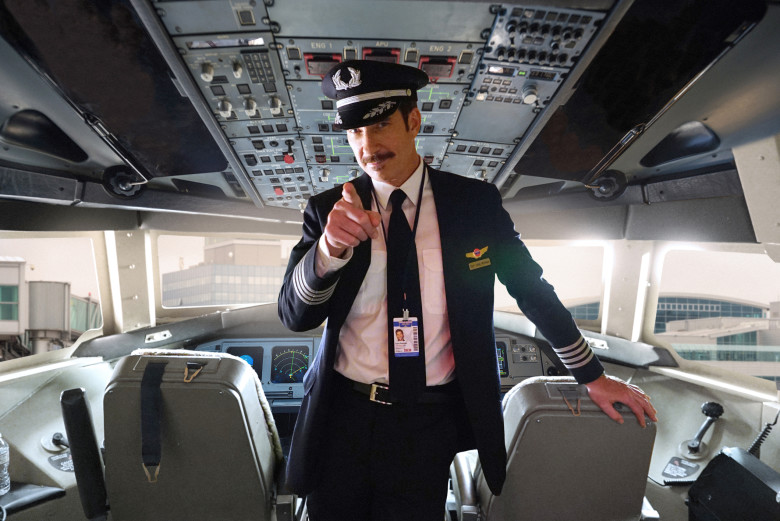 Despite all of the heavy hitters of comedy involved (Steve Levitan, Will Ferrell, and Adam McKay), LA To Vegas falls pretty flat.  What worked with single setting shows like Cheers and Taxi doesn’t quite cut the mustard here.  The last workplace comedy centering on an airline was Wings, and the reason that show works so well is a combination of things.  Wings had an amazing cast with unbelievable chemistry, and its characters were given real depth and emotional lives.  The Hackett brothers had been abandoned by their mother at a young age, and their father lost his mind in the aftermath, which left the older brother as the patriarch of the family.  It also benefitted from leaving the workplace setting to mine comedic gold in their personal lives.  The comedy in Wings is rooted in the brothers’ extreme loss, and gave a weight to the show, much like Sam’s alcoholism cost him a blossoming baseball career on Cheers.  There needs to be much more to characters than the superficial ability to crack jokes in order for an audience to keep returning week in and week out, and sadly the first two episodes of LA To Vegas show a clear lack of three-dimensionality to its characters.

There are some glimmers of hope in these first two episodes, and they lie exclusively with Kim Matula’s Ronnie and Dylan McDermott’s Captain Dave.  Captain Dave shares an egotistical streak that reminds me of Sam from Cheers, he just lacks the vulnerability Sam had that would make his character more interesting.  Despite this fact, the second episode deals with Dave having trouble flying the plane because of the “Yips” but the problem doesn’t appear to have any deeper resonance than to be played just for laughs.  How did Dave get stuck on such a crappy weekend airliner?  He has a natural charisma that draws in others, but does the same charisma belie a true lack of self-confidence?  Kim Matula is the real star of the show.  She has a natural comedic presence that seems effortless, while at the same time showing a desperation for something more out of her life than working for Jackpot Airlines.  Her character Ronnie has a will they or won’t type of relationship with one of the regular passengers, Colin (Ed Weeks, The Mindy Project).  We’ve seen these types of relationships on television forever, so the hope is that Ronnie turns out to be much more than just someone with a star-crossed romance.  Her character is far too interesting to be relegated to merely a romantic foil to Captain Dave’s presumed womanizing. 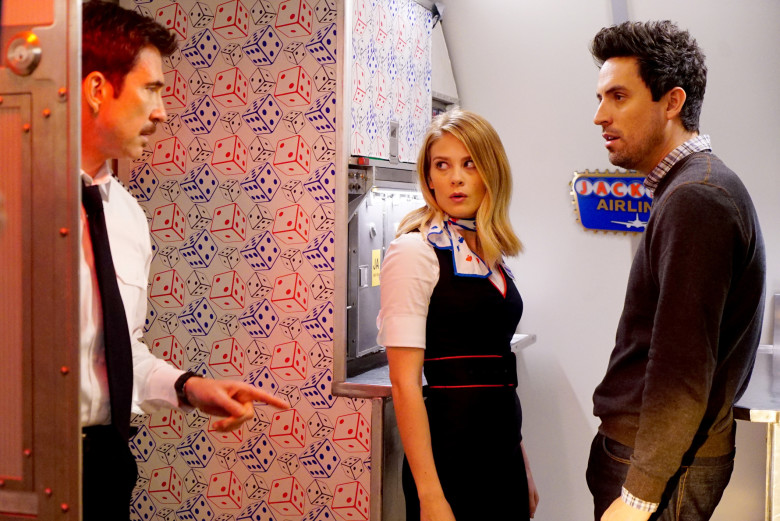 Other than Captain Dave and Ronnie, the majority of the other recurring characters on the flight appear to only be around to deliver punch lines.  Peter Stormare plays Artem, a gambler who makes a wager out of everything, and bets against fellow passengers on the plane.  So far there’s nothing to his character other than showing up and either giving the odds of something, or making another character the butt of a joke.  Olivia Macklin plays Nichole, a Las Vegas stripper who’s always attempting to recruit passengers on the plane to strip at her club because she’ll get a bonus.  Her character is little more than window dressing, meant to liven up the background with jokes and asides.  Nathan Lee Graham plays Ronnie’s co-worker Bernard, who spent the beginning of the first episode convincing Ronnie to stay at Jackpot Airlines because she fits in there, but he too eventually becomes just another person who delivers punchlines.  There is potential with all of these characters, but they need to be given some emotional depth on which to hang the comedy, and that just hasn’t happened in these first two episodes. 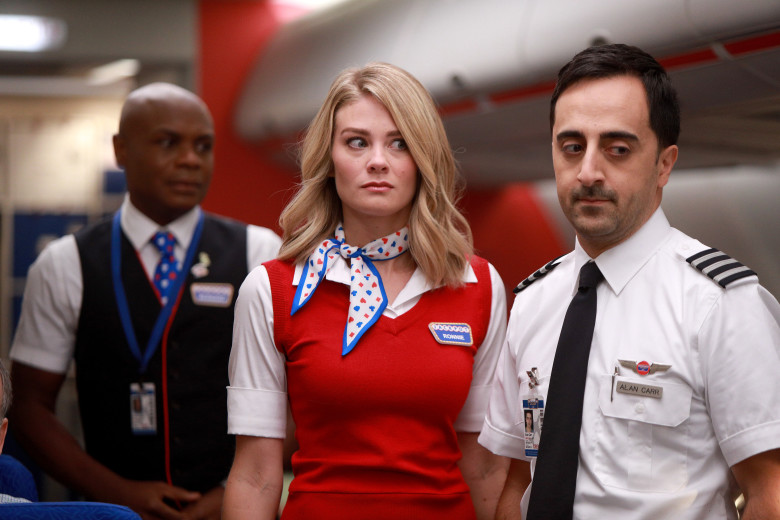 Steve Levitan directed the first two episodes, and in interviews, he’s promised exciting special guests to liven up the weekend flight shtick, but it’s going to take a lot more than special guests to give this show wings (pun intended).  If LA To Vegas can leave the workplace once in a while, since nearly all of the first two episodes take place inside the plane, it may have a chance to break out of its early rut, but it will also have to do some heavy character work to elevate itself into the realm of the shows it’s trying to emulate.