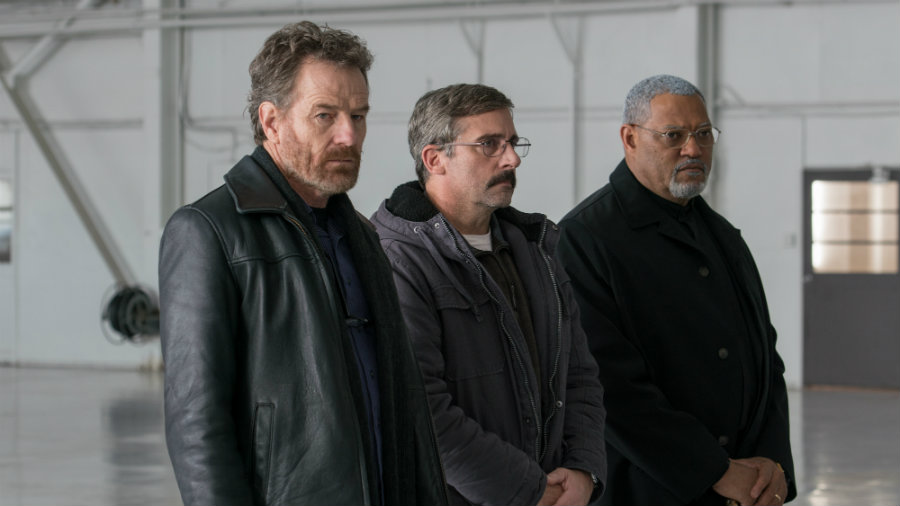 It’s a little strange that there’s so much interest now in everything Richard Linklater does when just five years ago, he could barely get arrested. The fact is that Linklater’s filmography has always been up and down, though the director has thrived when he’s been able to change things up, as with Boyhood. That film worked so well because he made it over the course of 12 years, improving it as he became a more proficient filmmaker.

While I certainly consider myself a fan of Linklater’s film, including his lesser work,  even I wasn’t sure that making Last Flag Flying was the best idea.

Inspired by the 1973 Hal Ashby film The Last Detail starring Jack Nicholson, Randy Quaid and Otis Young as three friends in the Marines, Linklater decided to play “what if” with their characters, imagining where they might be 30 years later. The Last Detail novelist Darryl Ponicsan shared writing credit with Linklater, so clearly Ponicsan already had some ideas of his own as to where his characters might be three decades later.

The film is set in 2003, and opens by introducing Bryan Cranston’s Sal Nealon, a bartender who likes drinking. When Steve Carell walks into his bar, Sal begins to realize that it’s his old military buddy Larry “Doc” Shepherd, who was just a kid when they last saw each other. They drive to a church where Larry wants to give Sal a surprise in the form of Mueller (Lawrence Fishburne), their formerly foul-mouthed buddy who is now a tee-totaling preacher.

The three Vietnam vets reunited, Larry begins to tell the others why he sought them out — his son has just been killed in Iraq, and he wants his friends to accompany him to Arlington where he’ll be buried. Once there, Larry gets cold feet and decides he’d rather bury his son closer to him in New Hampshire, and the trio set out to circumvent the military’s red tape in order to get his body released. 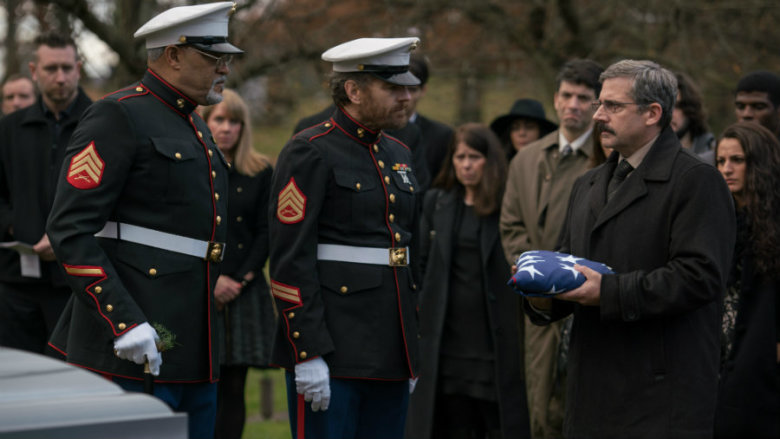 Last Flag Flying is a subdued comedy in which Cranston’s wise-cracking Sal takes the comedic lead, allowing Carell and Fishburne to offer more emotional, dramatic weight to the film. This isn’t the first time that Carell has switched things up to showcase his dramatic chops, but it doesn’t quite work as well here as it did in Little Miss Sunshine. It’s also odd to see him playing such a low-key character so soon after playing consummate showman Bobby Riggs in Battle of the Sexes.

Fortunately, Cranston is so insanely funny in the movie — Sal always riding his two buddies, especially Mueller — that the proceedings never threaten to become too dour, despite the inherently sad nature of the story. Although there are references to what happened in The Last Detail and the characters’ personalities and their group dynamic are similar, the names have been changed to further distance this film from Ashby’s classic.

There is plenty of political commentary here about how bad war is — especially the Iraq War, which in 2003, still wasn’t quite as anger-inducing as the Vietnam War would become many years later. In some ways, that’s the connective tissue between Last Flag Flying and some of Linklater’s earlier work, although the filmmaker never fully settles on whether he’s making a comedy or a drama. Because the tonal shifts come at you like a case of whiplash, it’s hard to fully enjoy either tone, knowing things could change on a dime.

That’s not necessarily a bad thing though, and Linklater’s proclivity for keeping his characters’ individual narratives flowing through dialogue keeps you mostly compelled, even through the film’s slower moments. I believe Linklater fully intended for Last Flag Flying to be a comedy with a lower case “c,” so if you’re expecting a lot of big laughs from this story about a man mourning the death of his son, you should probably adjust your expectations.

Last Flag Flying premieres Thursday night as the Opening Night selection of the 52nd New York Film Festival, and it will be released in New York and Los Angeles on Nov. 3 before a nationwide rollout on Nov. 17.