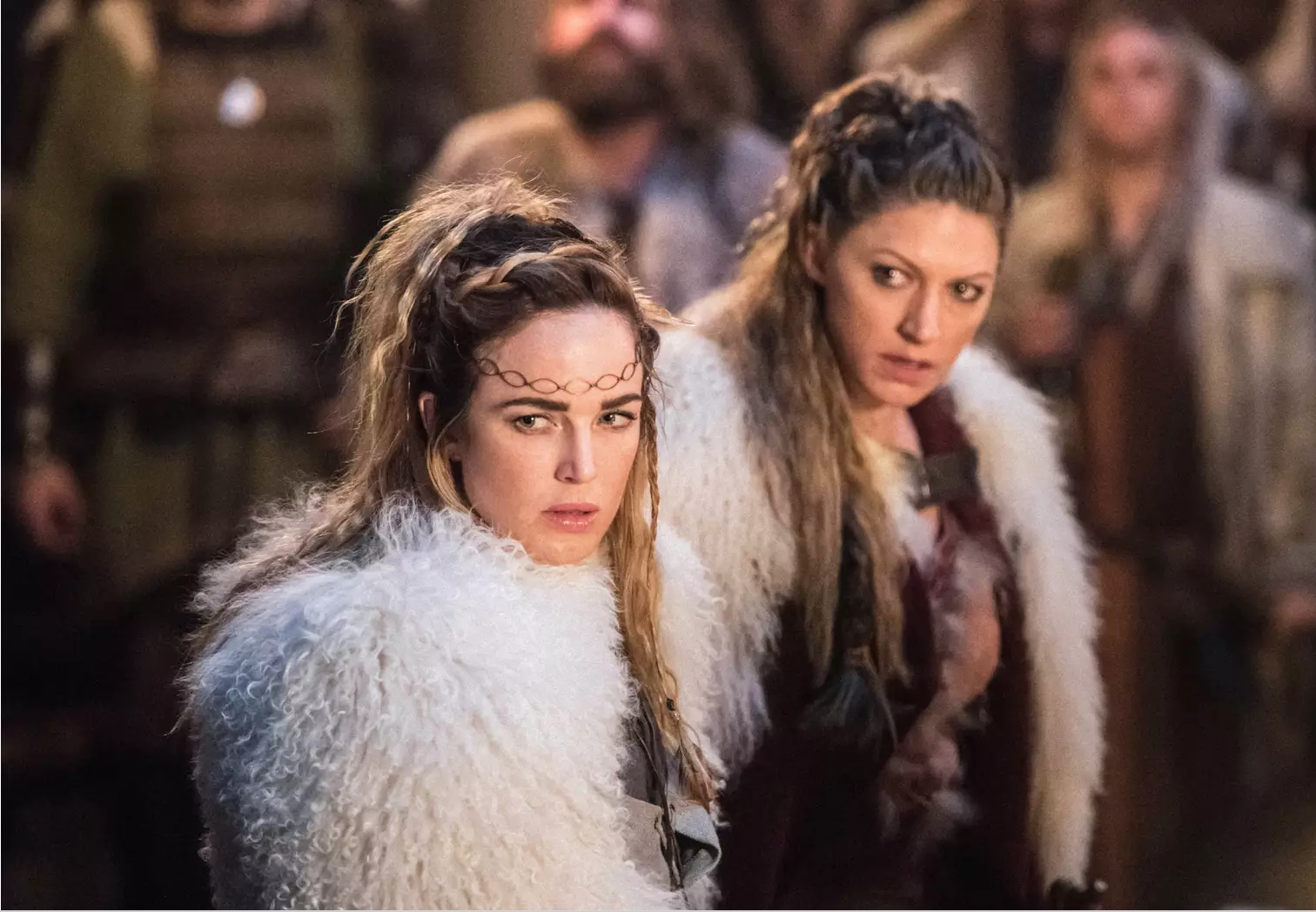 It’s the holiday season, and capitalism has even affected the Legends of Tomorrow! When a group of thirsty parents in 1992 fight over getting the last of a hideous children’s toy, Beebo, one parent, young Martin Stein (heyyyyy) who’s just trying to buy a Hanukah gift for Lily, gets sucked into a time portal and sent to a forest where a group of Vikings await him.  This is good news for those of us who were sad to see Stein go last week!

So Leo seems to be sticking around, which is fine, but he certainly doesn’t replace my guy Stein. However, in an attempt to be of service to the team, Leo presents them with a disturbing looking puppet of Stein in which they can work out their grief over his loss. It doesn’t work.

Anyway, after the Legends encounter a time quake, Gideon alerts them to a level 12 anachronism. Apparently, Leif Erikson’s Vikings have conquered America, and named it New Valhalla. The Legends go back to 1000 AD, where Erikson and his sister, Freydis, have used Martin’s genius to conquer the land. After rescuing Martin, he begs them to take him back to rescue his Beebo toy, which the Vikings have made their God.

Back on the ship, the team learns that the Vikings commonly worship troll like gods similar to Beebo, and that they have no choice but to rescue it. Meanwhile, Jax raises his suspicions to Nate that it’s strange that the team keeps running into their younger selves. Jax hypothesizes that perhaps fate wants them to “step up”, meaning they should tell younger Stein that older Stein is dead. Somewhere else on the ship, Leo has taken away Mick’s alcohol because he drinks too much. 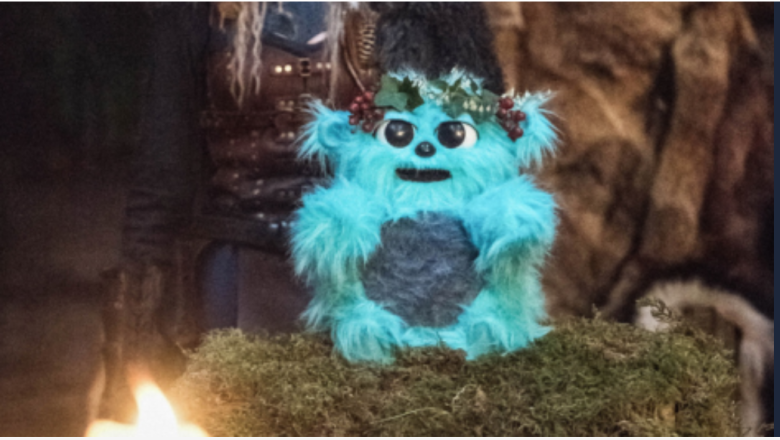 After Sara gets a call from Agent Sharpe, she learns that December 25th has become Beebo Day. Realizing that the anachronism is bigger then she imagined, Sara recruits Agent Sharpe to help out. So, the team touches down and joins the Vikings for their “Beebo Day” / Yule Tide celebration so that they can steal Beebo. Just as Mick is about to steal Beebo, he’s stopped by Freydis, who knocks him out cold after Mick attempts to drink Beebo’s mead.

Freydis (or Beebo) sentences Mick to burn in the pyre, forcing the Legends to blow their cover when Leo extinguishes the flames. During the chaos, Amaya tries to sneak away with Beebo, but accidentally squeezes him, and his loud “I LOVE YOU” alerts the Vikings, who are ready to fight over Beebo to the death. Epic sword battle ensues. Mick sets Beebo aflame, revealing to the Vikings that Beebo’s a “false god.” Just when the Legends think all is well, “Odin” arrives (Odin being Darkh and Elenor dressed as his daughter). Darkh and Elenor command the Vikings as the Legends sneak off to figure out a plan.

Back on the ship, Jax agrees to take Stein back home. Zari, being extra and causing issues, tells Jax that this is his chance to help change Stein’s fate if he can do what she did for Helena.

Faced with Darkh, his crazy lightning powers, and time quakes, Sara asks Sharpe to call the Time Bureau for back up. 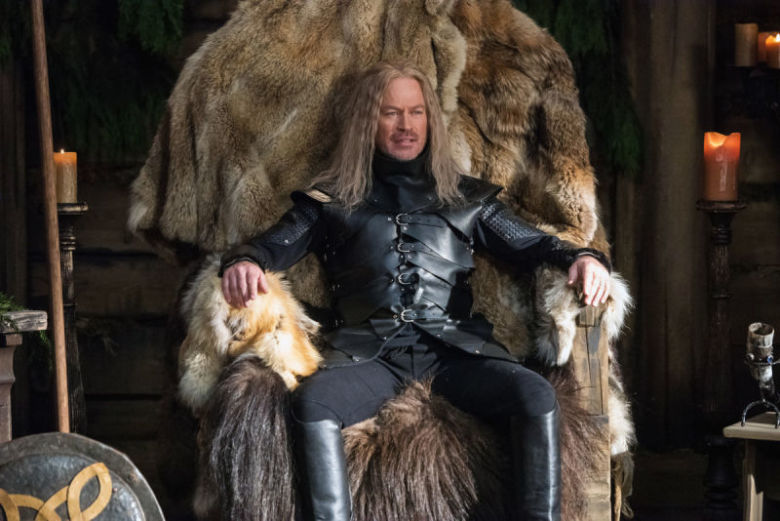 As Jax brings Stein back home, he tries to give Stein a letter to open in 2017, presenting him with a loophole to get out of his fate. With a lot of hesitation, young Stein takes the letter and heads back home.

Leo tries to connect with Mick, continuing the fight to keep Mick away from alcohol. Leo confesses that seeing Mick helps him cope with the loss of Mick on Earth X, who was completely different from the Mick in front of him now. After they argue, Leo swears to leave after they leave Vinland.

With time being of the essence, Sharpe confesses that the Time Bureau can’t be of help to them. Since Rip is in prison, the TB has been in disarray. Darkh and his magic have become so powerful that the TB has lost countless agents, and he is too powerful for even them. Without the TB, Sara admits to the team that while she knows they need to face Darkh, she can’t bear to lose anyone else. She commands that they take the Waverider and leave. The team knows it’s a stupid idea, and decide to all go with her.

Much to the team’s prediction, they’re able to get to Darkh quickly by working together. Ray enters the Beebo suit and pretends to be Beebo risen from the grave. After teaching the Vikings about Christianity (and global warming) the team hopes that they’ll leave America. Meanwhile, Mick and Leo are able to step Elenor, and Sara grabs Darkh and Eleanor before they can zap away. She’s transported to a deserted wasteland, where she meets Mallus himself (itself). He warns her that soon he’ll return to earth, where our world “will know unbearable pain” or something like that. 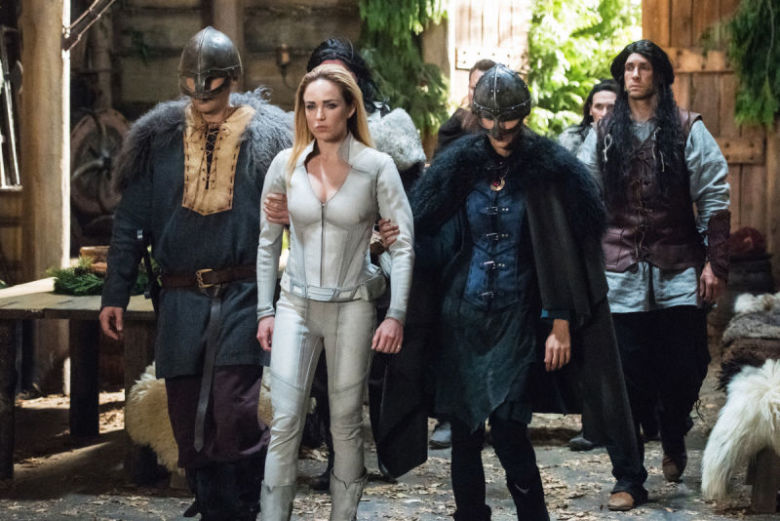 Back on the ship, Sara tells Sharpe that she met Mallus, and the void she was transported to made her feel cold and numb. In other news, although the anachronism was complete, Jax is disappointed to find that Stein is still dead and that Stein doesn’t seem to have read his letter. Upset, Jax returns to 1992 Central City to speak to young Stein. Stein tells Jax that he burned the letter and that he needs to let him go. He tells Jax that Jax needs to live his life and experience the happiness that life has afforded him. Finally, they say their official goodbyes. Doors closed on him.

Back on the ship, Jax tells Sara that he needs to get off the ship so he can move on. He wants is a different kind of adventure. Sara’s devastated but knows nothing she can say will convince Jax to stay, so she lets him leave with the promise she won’t tell the others. But just as he’s about to leave, the team surprises Jax with a holiday celebration. It’s so sweet! Even Leo allows Mick to drink again! Jax gives the team a heartwarming speech, telling them that they’re his family! And while I’d hoped that would keep Jax with the team, we watch as Sara drops Jax back off at home. Hopefully, it’s not a goodbye forever…

Finally, as Sara enters the ship, she’s approached by a man named John, who tells Sara there’s a demon who’s possessed a little girl and she needs to help stop her….

Yes! Another solid episode! As I’ve stated before, this season of the Legends has NOT disappointed me. This season has had a great mixture of humor, storytelling, and a complete handle on its large ensemble cast. I actually loved their version of a Christmas special, as the anachronism was themed but with purpose. I’ve been complaining about wanting to see what the big bad was, and I’m ecstatic that we finally got to meet Mallus himself.

As I stated earlier, I think that this show really has a handle on its story. What I love about this season is it’s integration of the DC universe, as well as it’s great balance of storylines. While I didn’t expect Jax to leave by the end of this episode (and I hate them for doing that to me), I thought that the set up was well done throughout the season, and I’m glad he got a conclusion after Stein’s death that actually made sense. Meanwhile, I’m completely happy that the show didn’t attempt to just whiz right on by Stein’s death, and that we got another episode dedicated to the team’s grief and how it affected each of them – especially Sara.

Finally, there was a whole lot going on this episode, but it was all balanced very well. Even though this episode had a lot of work to do (introduce an anachronism, Beebo, young Stein, Leo, Darkh, Mallus, Jax’s leaving the team) it did so in a way that kept the episode humorous, fun, and just exciting! This is the kind of episode that keeps me excited for next week…. Although I pray that no one else leaves or dies for a while. Please.