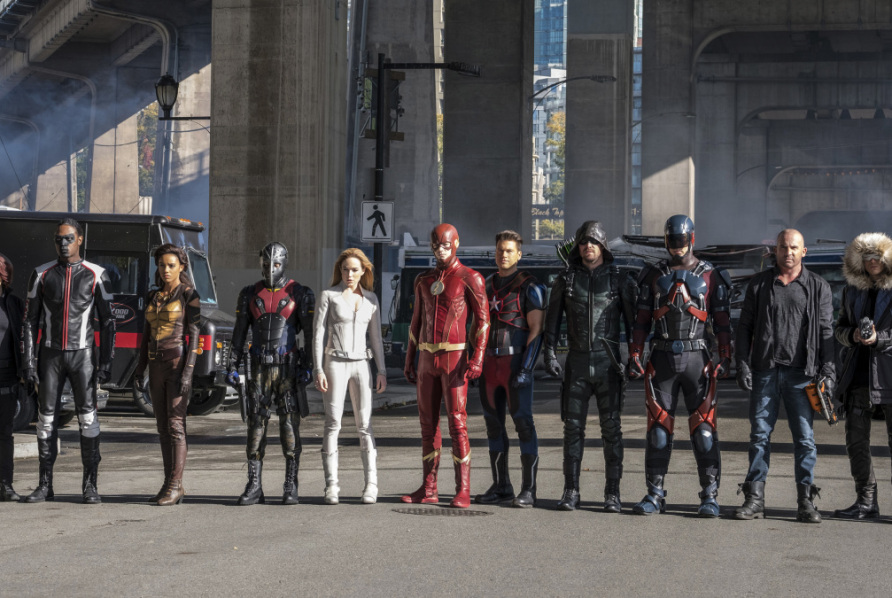 It’s that time of year folks: that fateful time of year between Thanksgiving and Christmas that we’ve finally been waiting for. That’s right, it’s crossover time.

Remember last year when you really didn’t  have to watch all three cross-over episodes to know what was going on. You should’ve, but you didn’t really really have to. This year?  Between traveling to the DCEU’s different Earths, Snart’s return, and evil Doppelgangers, tuning into this week’s Legends of Tomorrow without having first done your homework would leave you confused and ashamed. If you haven’t already, I would suggest catching up on those recaps!

If you’re having trouble remembering, in part three, having finally made it to the gate that could take them out of Earth X, Oliver, Barry, Sara, Stein, Alex, and Snart manage to come up with a plan that will hopefully keep them all alive while heavily under fire.  Their plan fails, and Stein ends up shot in the process.

So this episode picks up right in the middle of the action, Stein crawling for everyones life in order to activate the breach, getting shot a second time in the process. Jax realizes that the only way to save Stein, who’s now fighting for his life, is to merge into Firestorm again, hoping that that will keep Stein safe until they can get to safety.

Meanwhile, Barry and Ray manage to take down the Red Tornado and head to Earth-1 where Eobard has Kara strapped to a medical table and is just about to make the first cut on her to steal her heart for Overgirl. Luckily, after receiving Felicity and Iris’ SOS,
Ray  rescues Kara and saves the women. Original Oliver arrives just in time to save Felicity and team from being killed by his  Doppelganger – Dark Arrow. 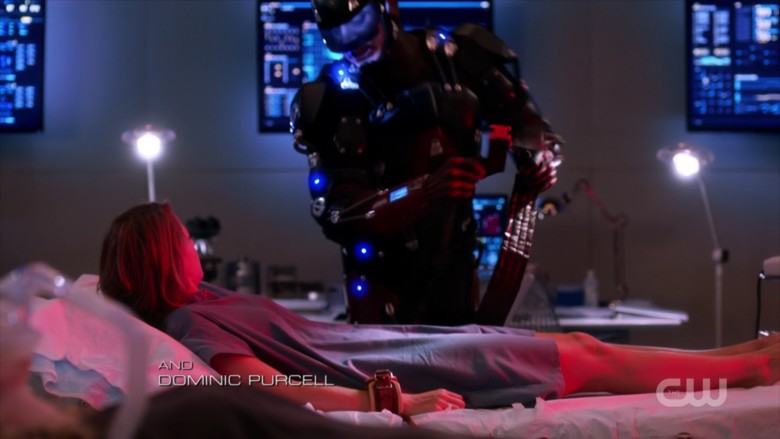 The Earth  X heroes join up with the Earth one heroes to help the Legends finally defeat Metallo, which culminates in an epic battle of powers and general awesomeness.

Back on the WaveRider, Jax separates from Stein, only to learn that because of their conjoined systems, he’s also suffered the same damage as Stein. While unlinking them would save Jax, Jax is currently the only thing keeping Stein alive.

Mick reconnects with Snart from Earth-X, who now goes by Leo. Mick learns that his own doppelganger on Earth-X died trying to save police officers from a burning police station.

Amaya, Zari, and Mr. Terrific join with Ray Terrill (“The Ray”)  on the mission to hunt Nazis. They’ve discovered that the Nazi’s have their own Waverider and that if Overgirl doesn’t get Supergirl’s heart she’ll create a supernova that will destroy the Midwest.

Back with Jax and Stein, Stein tells Jax that as long as they’re connected he’s nothing more than an “anchor” around Jax’s neck.  Stein tells Jax that he wants to take Cisco’s Firestorm cure, which will surely kill him but save Jax. Jax pleads with Stein, crying that he’s not ready for him to go (and Stein sorrowfully claiming he’s not ready to die either). Stein assures Jax that as his father, he can’t do anything less. So with no other choice, Jax gives Stein the cure. Jax promises to tell Clarissa and Lily that Stein loves him, and Stein thanks him for the adventure of a lifetime.

I’ll stop here and say, I just knew that Stein would come back in some kind of gotcha moment that  Legends sometimes does. But no. He dies. One of my favorite characters.

The news of Stein’s death shocks the team (and me, fam), and Jax returns to earth to give Stein’s family the horrible news. Sara, who promises that she’ll cry at the funeral, doesn’t have much time to grieve. Oliver lets her know that Overgirl and the Earth-Xers are going to use their Wave Rider and attack Central City to get the team to give up Kara. As the team preps for the battle, Oliver’s Doppelganger communicates with them, saying that they’ll retreat if they give up Supergirl. Without much time to grieve, the team promises to protect Earth for Stein and his family. 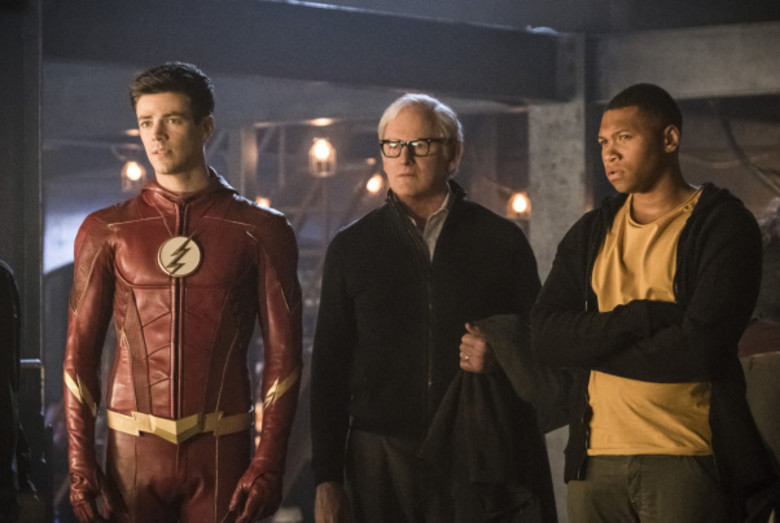 As promised, the Earth X Nazis land on Earth, a wave of capturing and killing everyone in their way. The Legends and the rest of the team attack from the ground, while Felicity and Cisco, Iris and Caitlin attack the other Earth-X Wave Rider.  Once successfully taking over the shit, the team is able to shoot down the Earth-X Wave Rider.

Back on the ground, Barry and Eobard come head to head, and Barry gives up the opportunity to kill Eobard.free. I’m sure that’ll be a problem for him later, but that’s none of my business.

Mid-battle, Supergirl provokes Overgirl in a fight, taking the battle up into space where no one can be harmed by her blast.  As Dark Arrow melts down at the sight of the love of his life dying, Oliver uses the moment to kill him.

The battle over, The Ray returns to Earth X, but Leo decides to stick around Earth -1 for a while.

We join the rest of the team at Stein’s funeral, which is just as sad as you’d imagine. Just before Team Supergirl heads back to Earth-38, Barry and Iris mention that since their wedding was ruined, all they really want to do is exchange vows. After Oliver implies he knows someone that’s been ordained, Barry uses to Star City and brings back Diggle, who’s an ordained minister. Then, right there, at the edge of Stein’s funeral, Flash-fans get the wedding they’ve been waiting for. 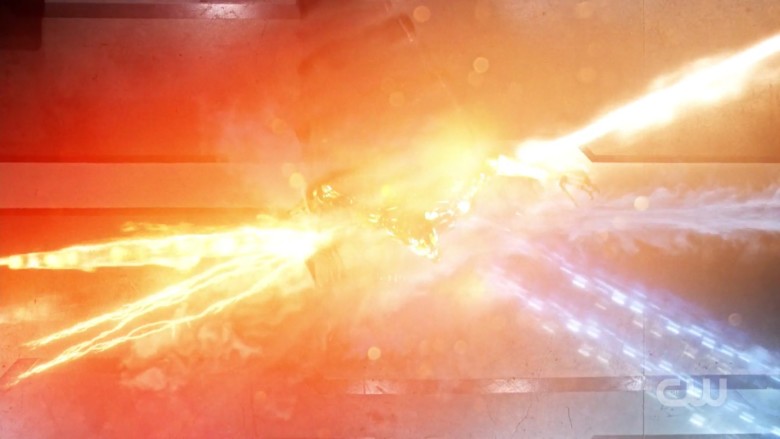 But then right before the two say  “I do” Felicity interrupts and asks Oliver to marry her. I mean, okay it’s cute or whatever but if I were Iris I would’ve knocked the mess out of Felicity. She could have at least waited until they finished their ceremony.

I really enjoyed this cross-over, folks. That’s it, I don’t have much to add. It’s hard to speak specifically about the Legends when all four shows were so well intertwined, but man as a whole I think that this crossover was fantastic. This year,r the cross-over not only expanded into some epic storylines for our characters but also, Legends fans finally got a taste of the bigger DCEU universe with the different Earths.

First of all, I think I speak for everyone when I say how devastated I was at Stein’s death. I’d heard word that he would be eventually leaving the series and I guess, as exits go, this was the most well-thought and powerful way to end Stein’s run. I figured that his character would split from Jax and leave with his family, not split from Jax and die. However, what was done so well was the build-up to this moment. We knew all Stein wanted was to get back to his family, which makes it even more devastating that re-joining the team at the beginning of the season ended up being his ultimate downfall. It makes his short stint as “FireStein” even more meaningful, as we finally got to see Stein take control of Firestorm.

Either way, and I’m not just saying this in a “you never know what you’re missing till it’s gone,” Stein was one of my favorite characters on the show, winning my heart with his soulful rendition of  “The Banana Boat Song” last season.  I’m assuming this won’t be the very very end of Stein, and hopefully, we’ll see him in some flashbacks (or maybe weird anachronisms).

Besides Stein’s death, much of the cross-over required all four shows to work together for one storyline. And, let’s be real, no one comes to a crossover to watch character development, they come for the action, and boy did it deliver. I am an absolute sucker for an action sequence in which a bunch of heroes from different teams come together to save the day, and I was not disappointed. From the final battle in part four to the ending with the wedding, this cross-over was well told and extremely satisfying. I know it probably cost them a lot of money, but I would love for them to do this again this season.

Last note: I will never forgive Felicity for stealing Barry and Iris’ limelight at their own wedding. Their first wedding got interrupted, and she thought it was cute to do it again??? Did ya’ll see the look on Iris’ face? She was not having it. I’m with you girl.