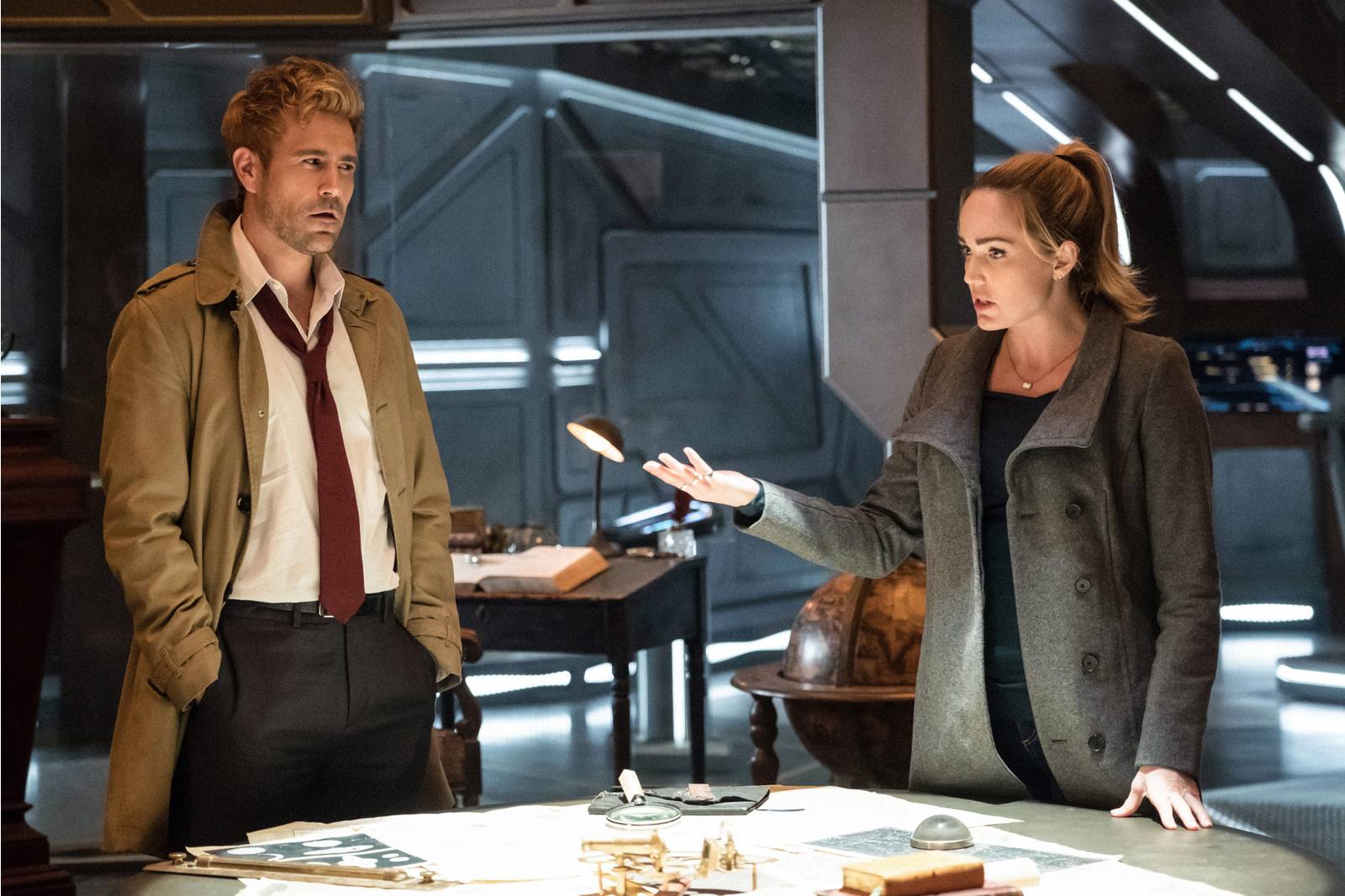 It’s been so long since we’ve seen the Legends on our screens that Brandon Routh’s temples are greying. But  I’m feeling the look.

After a hiatus that seemed to go on forever, Legends of Tomorrow has returned with episode 10, “Daddy Darhkest.” Legends of Tomorrow is known to have its “themed” episodes, and this week’s theme was The Excorsist. Legends has done well with the dark and spooky stuff before, so I loved returning this week with such a powerful punch.

We’re at episode ten of the season, so there’s no more avoiding the Mallus storyline. Now that Darhk has been resurrected and it seems like we finally have a stable corral of Legends to work with, it’s full steam ahead on figuring out who Mallus is, what his (or its) big plan is, and what’s up with his obsession with Sara. 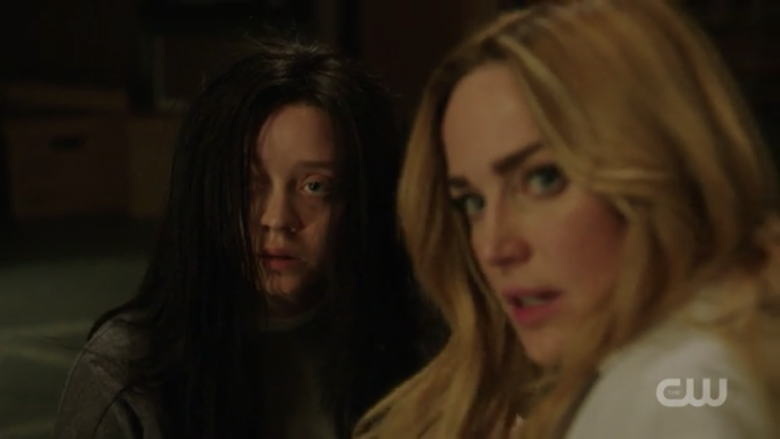 Episode 410 starts off with a bang, where Constantine is tasked with exorcising a demon from a little girl. We later learn that the little girl, Nora, is Damien Darhk’s daughter and that the demon possessing her is none other than Mallus. He loops in the Legends after Mallus tells him that he’s got his sights set on Sara next. This leads the Legends – specifically Sara, Leo, and Constantine – back to Nora, where they hope to both learn more about Mallus and free the little girl of the demon. It doesn’t work. Instead, Mallus uses an incantation to send the team back to 1969, where they must escape a psych ward without any help from the rest of the team. The solution? Sara allows Mallus to possess her so she can perform an incantation to get them out of the time zone and back to the present. While this works, Constantine warns Ray that Sara has Mallus’ powers within her and she will eventfully succumb to it.

Meanwhile, there’s a really interesting storyline between Amaya and her granddaughter Kuasa that’s weaved throughout the episode. To the dismay of Nate, Amaya is adamant on protecting Kuasa no matter how dangerous she may be. After the team captures Kuasa, Amaya has a heart to heart with her and learns that she’s so angry because she feels she was abandoned by both Amaya and her mother Amari back when their village was invaded. Kuasa tells Amaya that Darhk has promised that he can help her go back and save her village by joining him. Against Nathan’s warning, Amaya allows Kuasa to go free, promising that she will help her.

Finally, since no Legends episode can end peacefully, Sara learns from Agent Sharpe that Rip Hunter has gone missing. 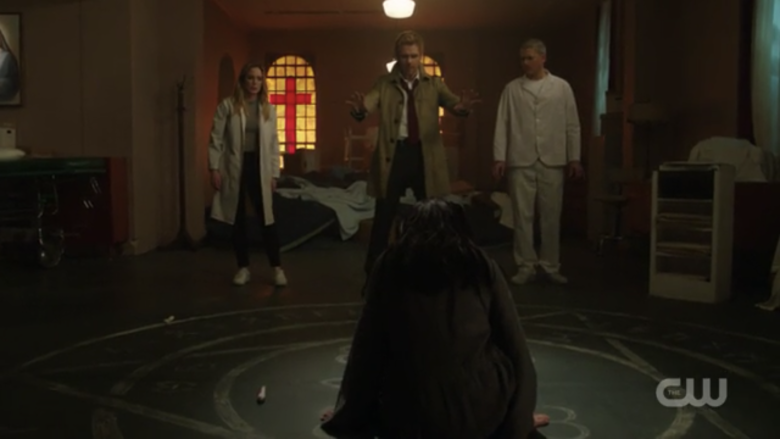 Overall, what I loved the most about this episode was how vivid the voices of each character were. I truly felt that everyone had their moment in the spotlight and I thought the writing was absolutely spot on. This episode helped reset each character’s point of view – especially coming off of such a long hiatus. In addition to this, there were some strong, nuanced personal arcs presented in this episode.

One storyline I found particularly interesting was Mick’s. Mick spent the entire episode ignoring the team and immersing himself in a live football game. His eruptions of rage whenever someone interrupted the game was hilarious enough, but I think the interactions between him and Leo made his story particularly different. Is it just me, or does Mick always seem uncomfortable when Leo brings up his sexuality? I wouldn’t say Mick has the problem with Leo being gay, and I’m pretty sure Mick hasn’t expressed any disdain towards any of the other LGBTQ characters he’s come into contact with. So why Leo? In fact, it was after Leo makes a comment about his sexuality earlier in the episode that Mick decided to drown out the world around him with football. It’s not until the end of the episode when Leo tells Mick he’s leaving the group that Mick acknowledges him with a hug. But even then, there was a strange moment when Leo admits he’s going home to marry Rey, where Mick became a little stand-offish. All this to say it’s not exactly clear why Mick seems uncomfortable around Leo, but there’s an intentional subplot that the writers’ have included with him and Leo that I think is indicative of good character development. Maybe Mick feels uncomfortable confronting the fact that the Leo (or Snart) he grew to love in this universe is truly gone? Maybe Mick is weirded out with the fact that the alternate version of himself is likely to be extremely different from himself. Either way, I’m enjoying his story.

On that note, I loved seeing Sara and Constantine hook up. I’m not a huge fan of the “sudden hookup in the hallway” trope, but it was nice to see Sara actually get to express her sexuality, especially since she’s usually so focused on saving the team. I also thought it was endearing that her hookup with Constantine spurred her to reach out to the Time Bureau Agent Sharpe, who Leo alluded is most definitely into her.

While I’ve never been that invested in the Amaya/Kuasa storyline, I was happy that there was some development to that story, and that Kuasa has a valid reason to be angry with Amaya. I’m excited to see where that will take Amaya’s character at the end of the season. This week was a reminder that at some point, Amaya might have to choose between going back and saving her village or allowing a terrible history to repeat itself in front of her eyes. 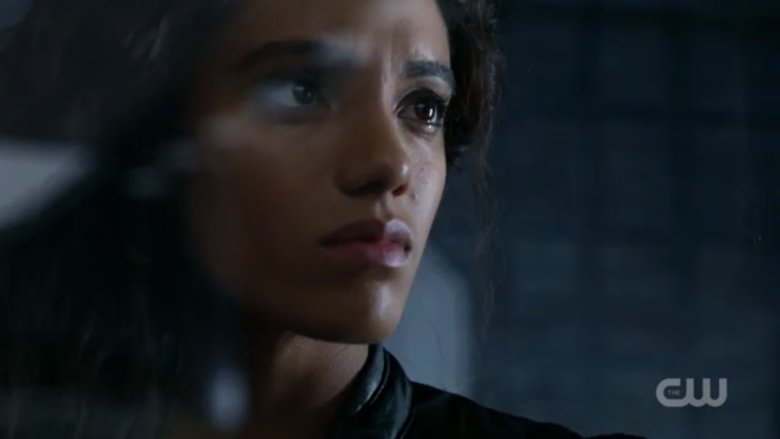 Of course, I loved the main storyline. What was truly interesting was Darhk’s arrival at the end of the episode, where he essentially manipulates his daughter into joining Mallus’ team. Mallus is recruiting some powerful forces in his crew – and I’m excited (and terrified) for the Legends, who can barely beat his minions individually, to face them all at once.

There wasn’t much that wasn’t on point this episode. If I had a complaint, I would say that besides establishing another enemy for the team (Nora), this episode didn’t really move the overarching story forward tremendously. But, coming off of a mid-season break, I don’t think that’s necessarily a bad thing. This episode also established Sara as a potential enemy in the future, which may have been the biggest revelation of the episode.

Overall, this episode set up the back half of the season in an entertaining way. Most of the threads from the front-half have now been woven together to create a cohesive back-half, and I am excited to see what comes next.