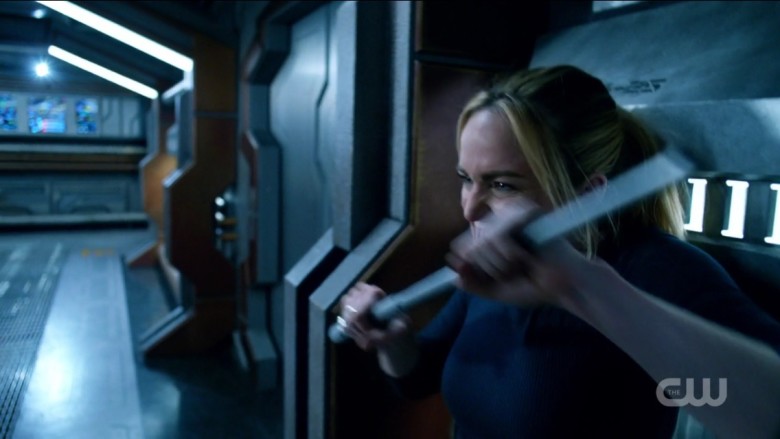 Let me pretend like I care about Nathan’s sorrow over Amaya real quick so I can feel sympathetic over the Nathan/Amaya flashback that kicked off this week’s episode of Legends of Tomorrow. So far, all we know is that Amaya took Rip’s advice to go back to 1948 Zambesi, but episode two, titled “Freak Show,” spilled the tea on what really happened.

In the opening flashback, we get a glimpse of the happy, idealistic version of Nathan and Amaya before she split. Amaya makes Nathan doughnuts from scratch and the two can barely keep their hands off each other. However, things take a turn when Amaya sees a news report claiming “Vixen” (who at the time would be her granddaughter) has been spotted in Detroit. This causes immediate distress to Amaya, who is nowhere to be found when Nathan returns home with more doughnuts (because their first batch was ruined during the almost sex).

Back in the present, the Legends continue their mission to find the remaining anachronisms caused by their squanders last season. This confused me just a tad because I figured the Time Bureau had that covered but, I guess they missed quite a few. This brings the Legends to my home state of Wisconsin in 1870, where Gideon has detected an anachronism at P.T. Barnum’s Roving Museums of Freaks and Hypnotic Hippodromes – a freak show. Fun fact, this is also the dude that went on to create Barnum and Bailey’s Circus! While Mick tries to keep his composure over his fear of clowns, the team splits up to find the anachronism hiding among the circus. As the P.T. announces the next act, “an animal from the past”, the team quickly realizes that the anachronism is actually the star of the show – a saber tooth tiger.

Nathan, Ray, and Jax’s only job is to capture it, but instead, they make things worse, accidentally releasing the monster instead of capturing it. So what are the Legends to do now? Who can help them track and capture a giant, prehistoric anachronism? Who? Sara takes off to find someone who can…. Amaya.

In Zambesi, Sarah does her best to convince a skeptical Amaya to come with her. Amaya tells Sara things are complicated, but eventually decides to come aboard. Everyone’s pretty enthusiastic so see Amaya, except Nathan, who doesn’t even try to mask his saltiness.

Hurt but unable to properly express his feelings, Nathan drags Jax and Nathan along with him to the bar to get over his Amaya woes. He reveals that she abandoned him on his birthday and does his best hide from his hurt feelings by engaging in some “she let herself go anyways” foolishness. Drunk and emboldened off of toxic masculinity, Nathan gets into a fight with a bar patron who insults the Bearded Lady. Nathan needlessly becomes Steel to beat the guy up, and then proceeds to boast about his and his fellow Legends powers in front of P.T., who invites them all back to his circus for a private show.

Meanwhile, Amaya and Sara track the sabertooth alone, capturing it with ease. They shrink it to a miniature and more manageable size tiger and are able to take it back to Gideon. So the episode should be over right? Nah.

Back at the bar, Nathan has left to finally talk to Amaya, but Ray and Jax decide to take P.T. up on his offer to come back to the circus.They’re captured by P.T. and his gang, with the hopes the Nathan and his wondrous “man of steel powers” will come and find them.

Caught up with Sara and Amaya, Nate sets up to rescue Jax and Ray, who are being held prisoner by P.T. Nate struggles to deal with being alone with Amaya after Sara goes after a mysterious man who’s been tailing them. Turns out, the man was sent by the Time Bureau to check up on them. I would be upset, but man this mission is going HORRIBLE!

Inside the ship, Mick accidentally lets the sabertooth free, the third stupid blunder of the episode, leaving the team with another even more unnecessary problem.

Unable to compensate for the bitterness between them, Nate and Amaya also end up being captured by P.T. and his crew.

Meanwhile back on the ship, Agent Sharpe from the Time Bureau arrives to arrest Sara and the Legends, stating that they’ve broken some fancy new time treaty. Refusing to go quietly, Sara fights Sharpe in hand-to-hand combat, her own freedom depending on it.

Mick and Stein, the only ones left on the ground, find that Jax and Ray have been roped into pretending to be Siamese twins. They make horrible performers, so a desperate P.T. threatens Nathan to become Steel and perform in his act, or he’ll kill Amaya.

While that goes down, Sara and Sharpe have fought themselves into exhaustion, both equally skilled at combat. Just as the two bond, the missing saber tooth reappears, having grown back to its full size. 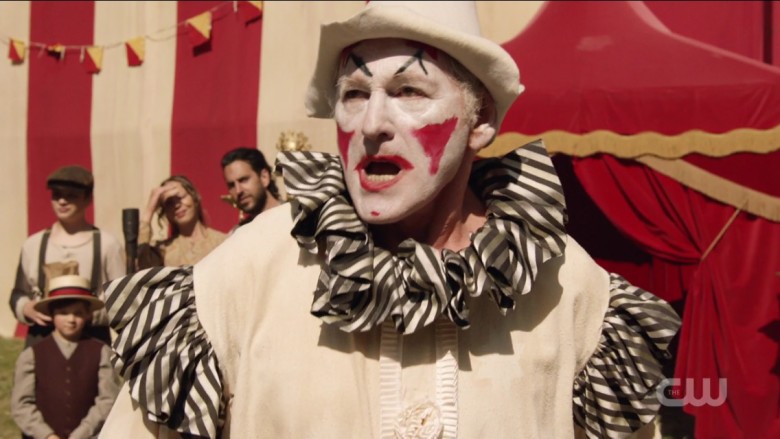 Things come to a head on the ground, when Mick’s fear of clowns kick-starts a battle between the Legends and P.T.’s minions. Stein is finally able to reconnect with Jax, and Firestorm makes his appearance, while inside the tent, Amaya unleashes hell on P.T. and his thugs who are torturing Captain Steel. She nearly kills P.T., showing and anger and strength we haven’t seen out of her yet. Nathan talks her out of killing P.T, right before the final blow.

After a slip up from Sharpe that Rip has something big for the Legends to face, Sara tries to blackmail Sharpe into telling her what exactly Rip’s ultimate plan was.We find out that Amaya plans on staying with the team longer, admitting to the Legends that she’s struggling to control her powers, having killed a bunch of Belgium soldiers back home. She agrees to stay with the Legends to clear her head.

In the final scene, we get a glimpse at the big bad, a beautiful woman/entity named Kuasa that has been resurrected by Mallus. For those of you who don’t know, Kuasa was the main antagonist of Vixen in Vixen, season 1.The real threat here is the fact that Mallus has the ability to raise bad folks from the dead, a real force of evil will probably bring back some terrifying villains for the Legends to face. 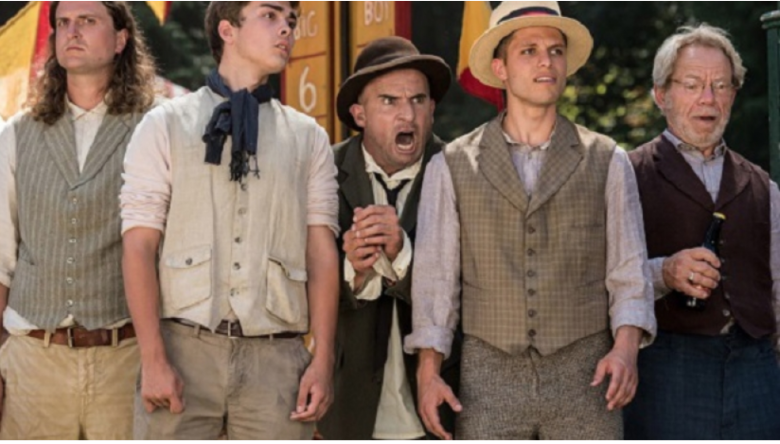 There were certainly a lot of antics this episode, but I’m not mad at it. Yeah the anachronism was really just a way to get Amaya back, and it was clear that once she was introduced there was no need for any of it, but I still had a lot of fun with the group, the tiger, and the circus. Do I think the A-story could’ve been a little stronger? Meh, maybe. Fans of last season know that the Legends use the less severe earlier episodes to introduce small seasonal arcs that will later become much, much darker and this episode seemed to fall in line with that formula. I thought the episode was really fun, although some might think that the overarching conflict felt unnecessary.

Even though I’m obviously not a fan of Nathan and Amaya (they were just so annoying last season), I liked the way they wove their story throughout the episode. When Amaya was brought back, I worried that I was going to have to suffer through non-stop Nate/Amaya issues, but because there as SO MUCH going on this week, their story didn’t feel suffocating and it all went down pretty smoothly.

I will say that during this episode, the Legends’ blunders seemed to be a little out of control. I know, I know, every screw up by the Legends was a plot device to get to the next level of conflict but I mean, it just felt like the Legends were REALLY incompetent. Like, Nathan messed up because he couldn’t shoot a ray gun at the tiger? Mick released the tiger because he was trying to feed it ham?? Their screw-ups last year came from unforeseeable mistakes or tiny details that went unnoticed. The Legends just come off sloppy this season. However, I guess it can be argued that they’re out of shape having taken their forced hiatus, so it’s really a personal issue.

All and all, I quite enjoyed this episode. I loved the fight between Sara an Agent Sharpe, especially the fact that they had both met their match. I LOL’d at Mick when he shouted “die clown!” and thought he was a great comedic punctuation to an already lighthearted episode.

I want to be disappointed that they didn’t use the freak show setting a bit more, and I honestly thought they could’ve, but once again, this episode really wasn’t about any of the anachronisms, but the personal arcs.