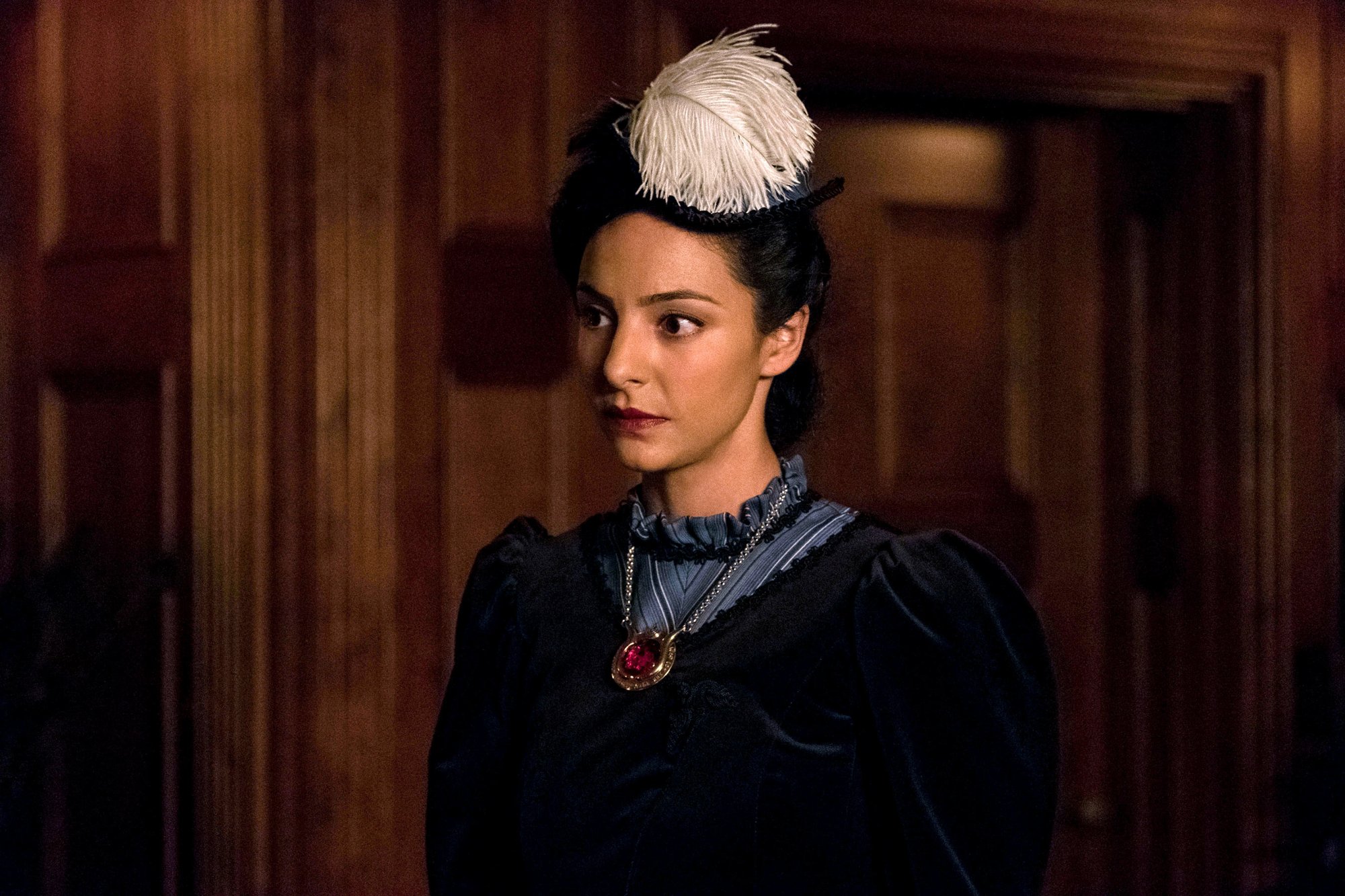 Let me ask a quick and, possibly, dumb question. What’s the real difference between heroes and Legends? At the beginning of every episode, one of the characters gives a speech about how our misguided team aren’t heroes, they’re legends. And every week I wonder if I’m supposed to know what the difference is. Just me? Okay.

I don’t know much about 1893 London except that it was dirty and dark. My theories were confirmed this week when a young detective (who happens to be Rip Hunter) stumbles upon a dead body and finds two puncture wounds on his neck. Naturally, Rip comes to the conclusion that there is a vampire on the loose.

Cut back to the present, where Ray has figured out a way to separate the psychic connection Jax has with Stein. We don’t have any evidence that it’s worked yet, but Jax’s convinced that it’s worked considering he doesn’t crave grapefruit anymore (something that Stein eats every morning). Meanwhile, Zari tells rest of the team that she wants to go back in time to save her family from death, and is disappointed with the team tells her it’s a no-go. 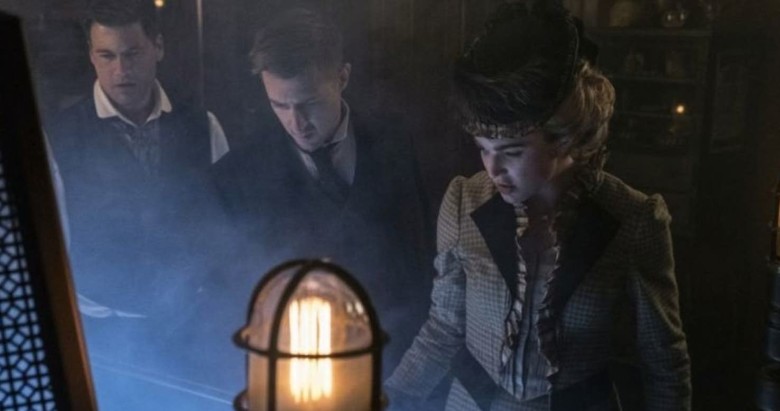 After Nate picks up on the vampire anachronism, the team makes their way to London to investigate. They arrive at the morgue, discovering their first anachronism: the 1800’s morgue guy with a Palmer smartwatch (complete with “Return of the Mack” ringtone.). After learning that the Londoneers buried a vampire from the future (which explains why people are getting bit up), they make their way to the cemetery to get a closer look at the futuristic corpse.But instead of finding a corpse, they find Rip, who requests the Legends’ help.

On the ship, Rip admits to the Legends that he needs their help tracking down Mallus (a fan of reanimating corpses). Rip needs greater help than the Time Bureau can give and asks the Legends to help him catch the vampire, which will hopefully lead them to Mallus. They agree, deciding to send Nathan as vampire bait.

Meanwhile, Ray continues to grow worried about Jax, who’s suffering from side effects of the split-up treatment.

Back on the ship, Amaya connects with Zari, literally. After riling Zari up about not being able to save her brother, their two totems connect, confirming that the two of them are destined to be together.

The team’s plan to track down the vampire backfires after Nate stumbles upon “Dr. Stein” in a dark field. Before getting too suspicious, Nate is captured, the team unable to get to him in time.

Nate wakes up in old school Dr. Stein’s lab, where he discovers a photo of a blood red moon. Rip lets the team know that Mallus’ return is associated with the blood red moon (or a lunar eclipse), happening tonight!

While Jax and Ray observe from the ship, the other members of the team gather at a séance, run by old Dr. Stein and a medium, Eleanor. I’m going to stop here and let ya’ll know this was probably the scariest part of the episode (therefore my favorite). At the séance, the medium’s eyes go black, Zari’s brother communicating with her from the dead – and he’s apparently pissed off that Zari “let him die.”

The team finally finds Nathan, who is seconds away from having his blood drained by some sort of mad doctor (the mad doctor’s blood extractor tool has been causing the puncture wound, not a vampire). They discover that the body that the blood has been collected for is none other than Damien Darhk. Why does he have so many lives, ya’ll. Why?? 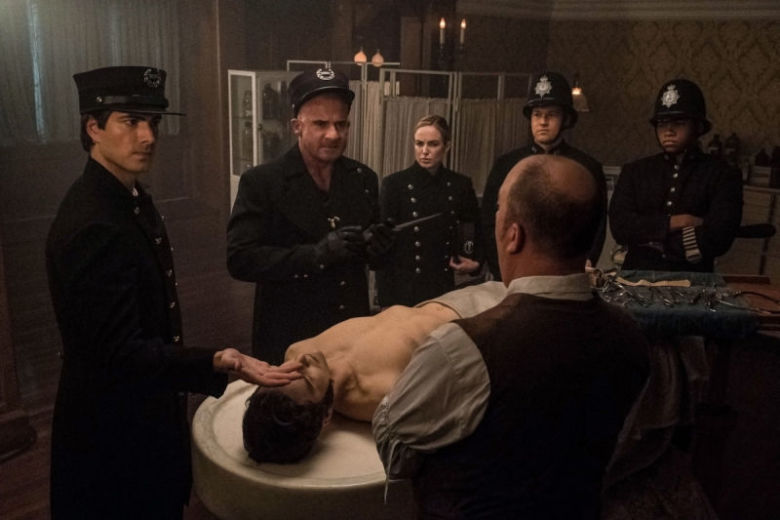 Rip and Sara come to a head, arguing about the correct course of action. Rip wishes to let Damien D return so they can get to Mallus, and Sara’s not having it.

Amaya checks in on Zari, who’s shaken from the communication with her brother. She admits that she left her brother to die, which is why she feels so guilty about it. Meanwhile, Stein has figured out that Jax is trying to break up Firestorm. He’s understandably salty.

Just when the team seems to finally be back on good terms, Rip undermines Sara’s authority, locking the team on the ship so he can enact his plan. But he’s missed one Legend, Zari, who’s made her way back to Eleanor to communicate with her brother again. Shocker, Madam Eleanor captures Zari. As the team hurries to rescue Zari, Rip finds her at some sort of ceremony, run by Eleanor, who dedicates the ceremony to Mallus. Rip demands to speak with Mallus, who possesses Eleanor before using the Red Moon’s power to reanimate Damien.

Right before Damien kills Rip, the Legends bust off the ship, but aren’t able to stop Damien and Eleanor/Mallus from escaping.

Back on the ship, Jax tells Stein he’s reconnected them in the hopes that they can figure out a safe way to split so that Stein can be with his family. Sara confronts Rip for betraying the team, reporting him to the Time Bureau. He’s immediately arrested and detained, a cold, cold move by Sara (but justified). As he’s carted out, he warns Sara of a war coming, and tells her she needs to be ready. 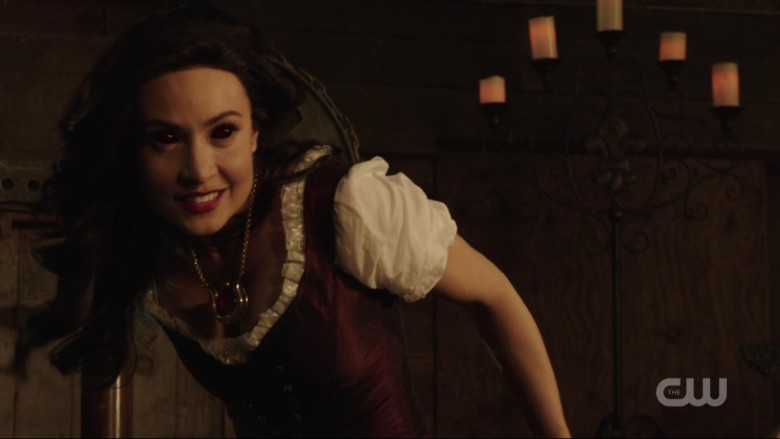 I was a big fan of setting up that this episode was about vampires, and while I was a little salty that it was all a mislead, the segue into learning that Mallus has returned, and meeting him through demonic possession was definitely a welcomed surprise. And while I’m not super thrilled that Damien will be back this season, I thought his resurrection was epic making me excited (and worried) that this may be the season where the Legends have met their match. Between powerful god Mallus, and now super strengthened Damien who’s fueled by the blood of innocent people, there’s actually a chance that the Legends won’t make it! I’m here for an undefeatable rival, and since last season wrapped up a little too neatly for me, I’m glad that it’ll almost be impossible to do the same this season.

I’ve said it before and I’ll say it again, Legends is getting better and better at integrating their “anachronisms” plotline with their overarching season big bad story arc. I thought this episode was a demonstration of how stabilized the tone of the show has become, and how, in my opinion, the Legends have really figured out a formula for their show that truly works for them.

Finally, I have to say that each of the characters has really seemed to come into their own. Yes, obviously they’ve always been a band of misfit heroes whose unique personalities let to hijinks and conflict, but this season, there seems to be a purpose to each character’s actions and I feel as though the actors have really added their own touch to their characters. Surprisingly, my favorite this season has been Nathan (I know, I know!!). They’ve given him a hilarious and bro-like comedic timing which I genuinely look forward to each week. He finds little moments to be hilarious, and it’s actually pretty refreshing. I’m also a big fan of Zari, and I love how grounded she’s portrayed. I’m able to connect with her and feel sympathetic towards her struggle without her needing to do much, which to me, is a huge plus.

One last thing though: there’s no reason I should’ve heard “Return of the Mack” three times this episode. I love how Legends has figured out how to incorporate its witty humor into their more serious episodes, but…we get it, ya’ll are hip.

Alright ya’ll, I think this is it. Playtime is over, Mallus is back, and the Legends might have just met their match.