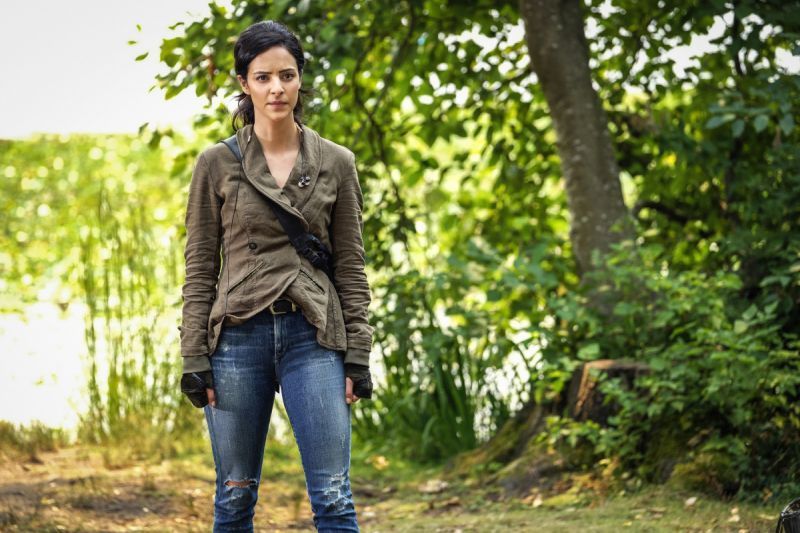 There was a time when the Legends of Tomorrow would tease us for episodes and episodes before they reintroduced the big bad of the season…. But that reign of terror is over! This week’s episode, “Zari,” kicks off in Seattle, 2042. Kuasa has returned, and her mission is to get to a prisoner being held in a heavily armored and equally as heavily guarded van. After killing every guard in sight, Kuasa’s disappointed to see that the prisoner has escaped. However, hidden in the bushes nearby is the Time Bureau agent from episode 2, dorky Gary Green, who immediately calls a distress signal Code 99, warning his team that he’s just witnessed a “Female meta.”

Sara, who’s intercepted the Time Bureau’s transmissions, hears the distress signal and sends the team to future Seattle to help. Upon arrival, they find the city under martial law – the scariest thing about this episode if you ask me. The Legends learn more about the prisoner that Kuasa is after, Zari Tomez (played by American Odyssey’s Tala Ash), a meta-human on the run from A.R.G.U.S – which has become an authoritarian government system with anti-metahuman laws. While attempting to rescue Zari, the Legends end up in the hands of A.R.G.U.S themselves. Zari escapes. 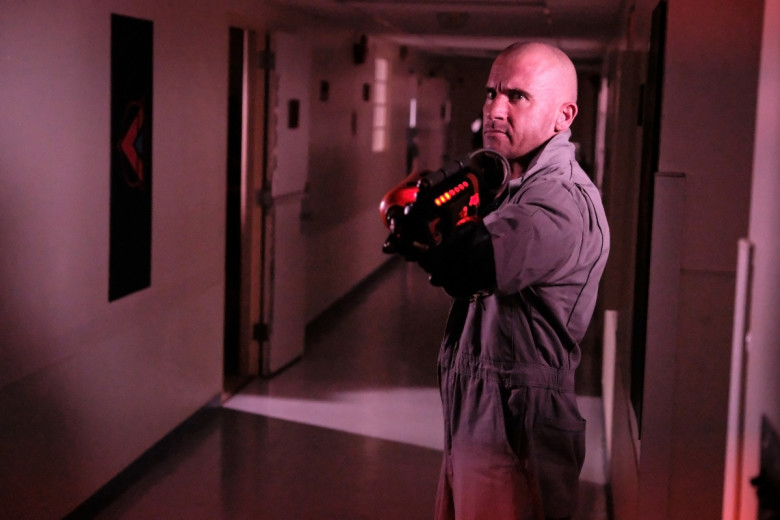 Meanwhile, Amaya continues struggling to maintain control over her powers. Stein and Nate find her on the ceiling, “sleepwalking” as a spider. Amaya worries that eventually her sleepwalking will be dangerous – and she’ll end up hurting someone.

After escaping custody, the rest of the Legends learn a bit more about 2042, including Zari’s rap sheet, which among a bunch of infractions includes being hunted because she’s Muslim (religion is illegal in 2042). The Legends find Zari at a local bar, but before they can bring her to safety, they come head to head with the Kuasa, who’s arrived to capture Zari. I should note here that while I’m calling her by her name, the Legends only know Kuasa as the “rouge time traveler.”

Sara does her best to fight Kuasa, but gets her butt kicked pretty badly by this highly trained water deity. Mick quickly starts a bar fight as a diversion, and the Legends narrowly escape Kuasa’s wrath.

After rescuing Zari, Gary slips up and reveals that they’re time travelers (something that Zari isn’t supposed to know). Zari agrees to help the Legends capture the Kuasa if they help break her brother out of an A.R.G.U.S. prison where he’s being held. They agree.

The team makes it to the prison, where they earn that everyone being held in captivity is a meta-human. Once Jax learns that A.R.G.U.S. is torturing and experimenting on the prisoners they hold, Jax decides to free all of the meta-human prisoners. As the team searches for Zari’s brother, they learn that Zari’s plan never was to rescue the brother, but to steal a necklace out of the prison’s chambers. Zari activates the necklace, which immediately activates Amaya’s totem. Back on the ship, Amaya wakes up in a trance, speaking a different language. While Sara figures out how to get Zari back in prison to restore the timeline, Jax argues that way A.R.G.U.S. treats it’s meta-humans isn’t right, and that they should not be trying to put Zari in that situation. 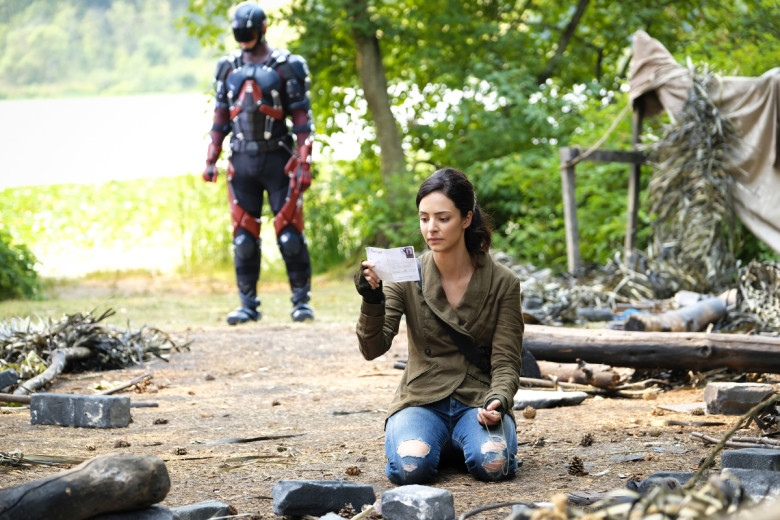 Amaya wakes up in the “world between worlds,” where she communicates with her ancestors and asks for help controlling her powers. Her ancestor tells Amaya that she can’t control her totem, and she has to learn to “run besides it.” The ancestor tells her that her totem grows stronger when the threats she faces are becoming more dangerous. Finally, she advises Amaya to find the new totem bearer (Zari) and that she can’t fail her.

Ray, who’s been tracking Zari, find Zari at a rendezvous point where she’s waiting for a group of metas to meet her. She tells Ray that her brother was killed by A.R.G.U.S. agents and that she was supposed to be meeting her family here… who’s likely dead. Before Ray and Zari can make their way back to safety, Kuasa finds them. Ray calls to the rest of the Legends for help, but before Sara can navigate the Waverider to Ray’s location, the Time Bureau stops the ship.

The Legends come face to face with Agent Sharpe, who threatens to scatter them into space if they don’t give up the coordinates of Ray and Zari. Obviously, that doesn’t happen, and in a risky move, Sara navigates the Waverider away, leading the team to Ray, where…

Coming face to face with the assassin, Zari learns that Kuasa only wants one thing -the totem. The Legends make it to Ray and Zari’s rescue just in time. Amaya, emboldened by her discussion with her ancestors, is easily able to knock down the assassin. But before she can actually secure a victory, the assassin, Kuasa, tells her that she would kill her “but she’d be killing herself.” Oop! She disappears into time leaving us all like whaattttt?

Having freed Zari, Sara receives a threat from Agent Sharpe, who lets her know that if she ever tracks the Legends down, they’ll never let her escape. After the team comes back to 2042 to drop of Zari, Amaya asks Zari to come with the Legends, and that they need to stay connected. She agrees, and just like that, we get a new legend!

The last few minutes of the episode brings us to Ivy Town 1988, where a little kid hides from his bullies in a sewer only to be approached by a gurgling, scary.. thing. It’s not until the very end that we find out the kid is actually Ray Palmer. Yeah he’s in danger. 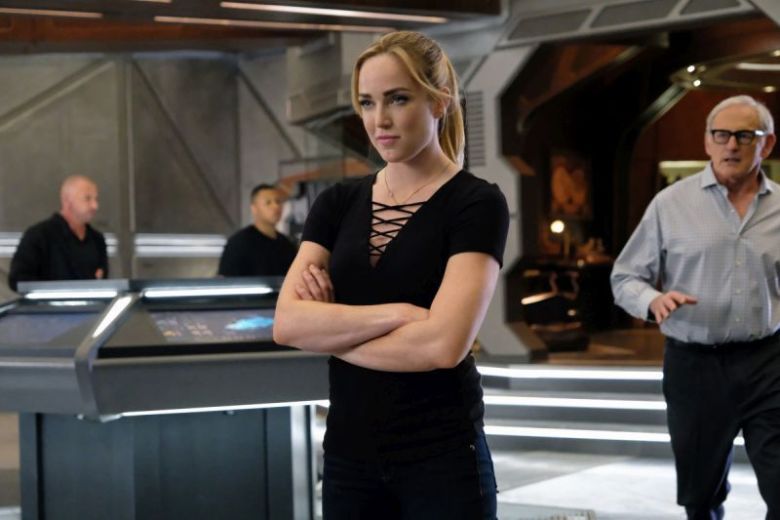 Out of the three episodes we’ve seen so far this season, I’d say this one shows the most promise. Like I’ve said from the beginning of the season, no one should count the storytelling of this show out by the first couple episodes of the season. Just like last season, things are starting to pick up, and the overarching villain of this season is beginning to intertwine with “anachronisms of the week.” I also thought the writing was actually pretty fantastic this week. It takes a lot for me to even crack a smile, but this week’s episode got me to chuckle. The writer of this episode had a certain sarcastic, dark humor that felt especially strong while maintaining the authenticity of each character’s voices. Honestly, this episode flowered very well and kept me engrossed from start to finish.

If you weren’t able to tell, the Legends did not come to play when it came to the social messages this week. This episode hit on mansplaining (thank goodness), the treatment of Muslims in this country, the racial inequality of the jail system in this country, AND mutants (I get that the last one isn’t real but I’ve been waiting for them to touch on it again, so…) This certainly isn’t the first time the Legends have touched on social commentary, but this one felt seamless and didn’t come off as an after-school special. Now some might argue that the way the writers sprinkled in the commentary was a little spotty and random, but to that, I’d say that’s way better and effective than dedicating a whole episode to exploring the concept of, say mansplaining. I think the way they did it was simple and effective while staying true to the story.

My MVP this episode was Nathan. I know, shocker, but Nathan on drugs was probably the best part of this episode (and I don’t mean that in a shady way). I rarely, rarely find anything that he does hilarious or interesting but Nick Zano dedicated himself to the role. I have to say, the part where Nathan thought he was going full speed ahead, gripping on to the sides of his chair, only to find out that the engine was idling actually made me laugh. A first.

Also, and I could just be dumb, considering I didn’t really keep up with the comics, but the introduction of Zari to the team felt surprising. I saw it coming with Amaya, both when she returned and originally joined, but this episode had so much juicy stuff going on that the way they slid in her working with Amaya wasn’t super obvious in my opinion. I was pleasantly surprised with the outcome and generally felt like it was a great payoff.

Finally, I have to give props to Mick’s “Prison Break” mention.

So we saw Kuasa resurrected last week, and this week we get wind that she has more to do with Amaya than we thought. Now, I could sit here and do research and spoil what we’ll probably learn by the end of the season (like who she is and how she relates to Amaya), but I’m not. I feel like it’s important to judge the show on how well they reveal source material information versus coming into it with a strong knowledge of the source material. Think of it this way, if no one had read the Harry Potter books, would we actually think the movies were good? That’s how I’m going into this season.