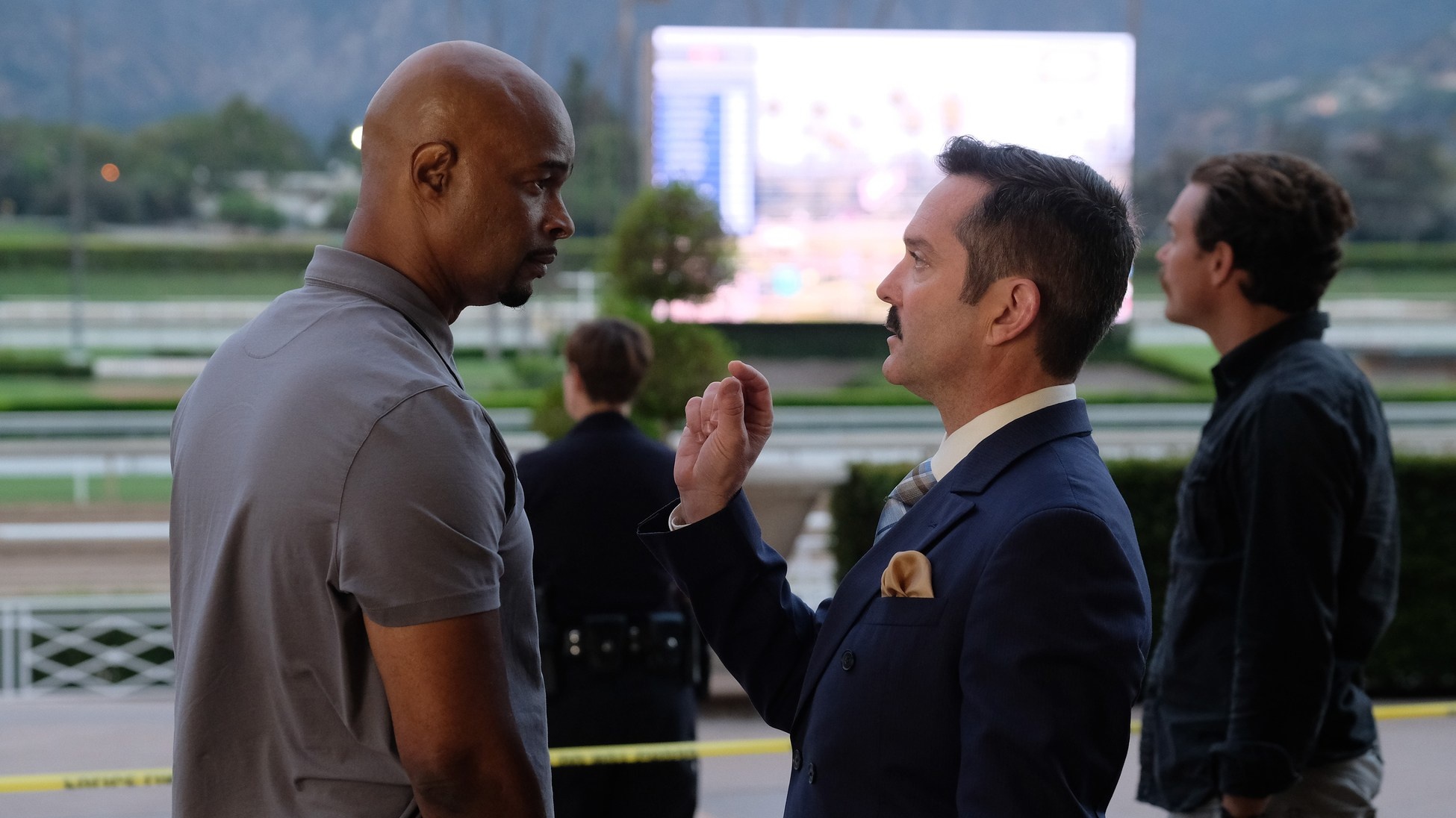 Lethal Weapon brings Thomas Lennon back to unleash his Leo Getz in “Let it Ride.” They have to keep Thomas Lennon on a recurring schedule, he fits right in paired with Wayans, Sharp, and the rest of the talented cast. The week, Riggs gets off to a bumpy start when he wakes up on the beach, drunk. Immediately, he realizes his trailer is missing. The city towed his vehicle after just ten notices. Murtaugh’s dealing with his own loss when he finds his fridge empty of all dairy and meat thanks to Jr.’s recent visit from college.

The victim of the week is a lovely optimist named Howard Trotter. He likes to bet on the ponies at Santa Anita Park. This week he bets big on a sure thing. Howard is so confident his horse is coming in, he tries to get a table at the restaurant, but he recognizes a couple of thugs and heads out as fast as he can. Howard tries to hide in the crowd, but one of the thugs catches up to him and needles him in his neck. Howard drops dead just as his horse wins the race.

Leo Getz arrives just after the EMT’s and dismisses them for disturbing the crime scene. Howard was a big man, most people assume he died of dietary issues, but Leo suspects murder. He doesn’t move until Riggs and Murtaugh arrive. Leo is happy to see Murtaugh, apparently, he hasn’t been returning his calls, but Roger doesn’t suspect murder either. Riggs is the first to consider Howard was killed based on the position of his body. 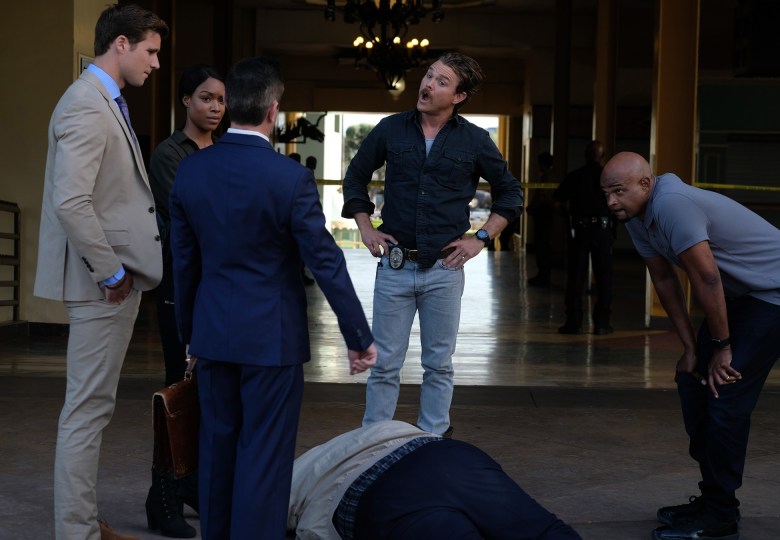 Scorsese is fascinated by the condition of Howard’s body, he should have been dead a long time ago from liver failure or any other number of ailments. However, toxicology does indicate poison, and he quickly locates the injection site on his neck. Leo leads Riggs and Murtaugh to Howard’s apartment, a nasty little box above a bar with terrible plumbing. Leo notices a special collectable baseball bat that he won for Howard as part of a settlement is missing. Leo asks Riggs and Murtaugh to step into the hall when they bicker about Martuagh mentioning Riggs in his will, something Riggs wants nothing to do with. Leo steps into the bathroom to wash his hands and gets attacked by Howard’s killer, waiting in the shower. They struggle and smash through the glass door. Leo is smaller, but the thug catches a long shiv of glass in his neck. Big thug bleeds out when Leo removes the glassy splinter.

The dead guy turns out to be their first real clue. His name is Alexi and he’s an enforcer for a loan shark, Tony Guzman. Leo knows Guzman operates a tattoo parlor where he conducts other small time criminal operations. Leo insists on going with Riggs and Murtaugh and immediately sees the prized baseball bat missing from Howard’s apartment. Tony tries to play it off as collateral. Howard owed him money and he held onto the bat until paid. He has a good argument, loan shark’s might break people who owe, but not kill them. They’d never get their money back. Riggs discovers a weapon stash on site and there’s a fight. In the scuffle, Murtaugh gets marked by the tattoo gun, a curvy line across his shoulder. A half tatt couldn’t possibly be better than a full tatt. 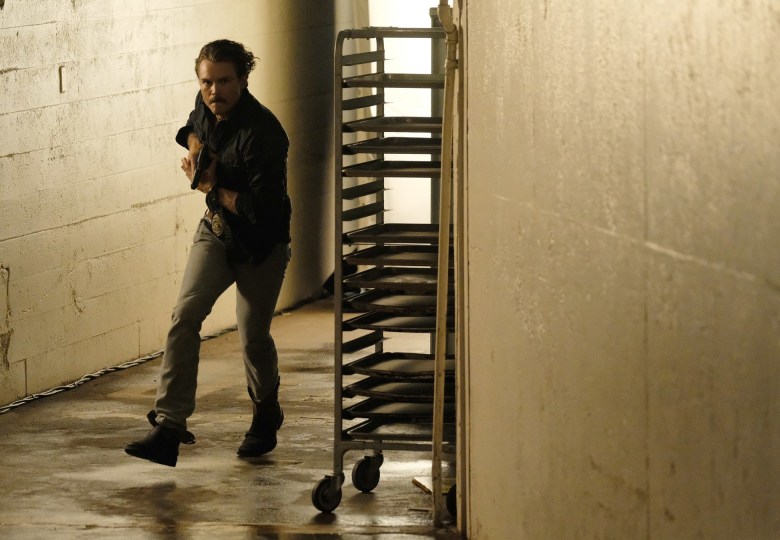 Tony doesn’t have much to add during interrogation, except that Howard was excited about a lucrative windfall he was supposed to hit this week. Riggs and Murtaugh hear gamblers talk about big paydays all the time, but Leo thinks Tony was telling the truth. Leo convinces the B-team, Baily and Bowman, to help him scour Howard’s apartment for more clues.

Meanwhile, homeless Riggs struggle to find a new place to sleep. Trish checks with the city, but he owes a fortune in fines on the trailer. Then, she offers to help find him a place he can afford. Dr. Cahill asks him about his displacement in session. Riggs and his abusive alcoholic father were evicted from their house when he was young. He still has issues about feeling safe at home and he feels alone though he is surrounded by friends. He ends up sleeping in his truck parked at LAPD, then it starts to rain. Riggs gets drunk, steals his trailer back from the impound lot, and crashes it through Murtaugh’s backyard fence. 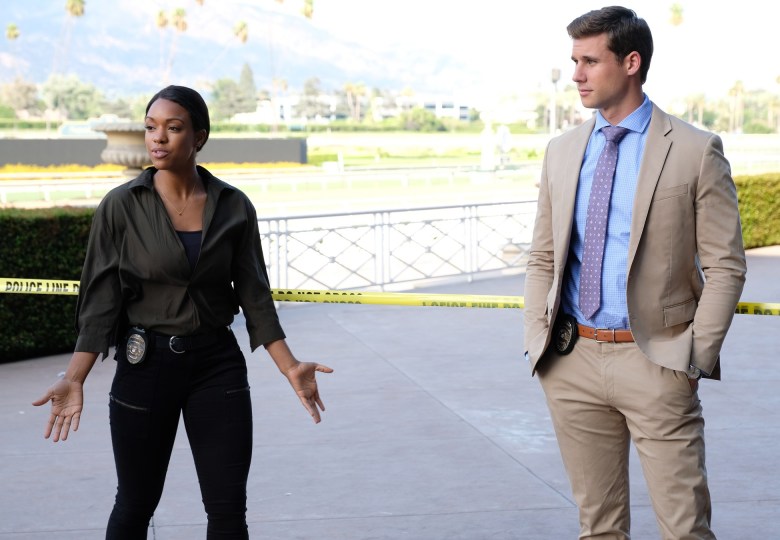 Riggs knows he’s gone too far when he sobers up the next morning. Trish tries, but is far too angry to even attempt a conversation or hear his apology. Meanwhile, Leo and the B-team discover helpful clues hidden in Howard’s CD collection. Howard had been recording private conversations between jockeys at the jockey club. When they match recordings to his log, they find an hour missing. They suspect it’s why he was murdered.

Riggs and Murtaugh go to the Jockey Club while Leo heads to the track Restaurant to spoon Howard’s ashes according to his will. The maître d’ discovers Leo and has security show him out. Shane, the security officer recognizes Leo from Howard’s wake and takes him hostage. Riggs and Murtaugh find a hole chipped through the backroom floor; a group of baddies are taking down the track’s money room with automatic weapons. Riggs and Murtaugh spook them, disrupting their escape route. Riggs follows the main group with the cash when Murtaugh peels off to follow Shane and Leo. Yes, Riggs shoots the guy with a bag of cash in a minor Lethal Weapon moment and Murtaugh “Getz” creative to save Leo. It’s a win in the end. Leo showers the B-team with praise for their investigative work and gives Murtaugh credit for saving his life again. Riggs parks his outlaw trailer in Murtaugh’s garage while he fixes the fence he demolished and considers what home really means to him.