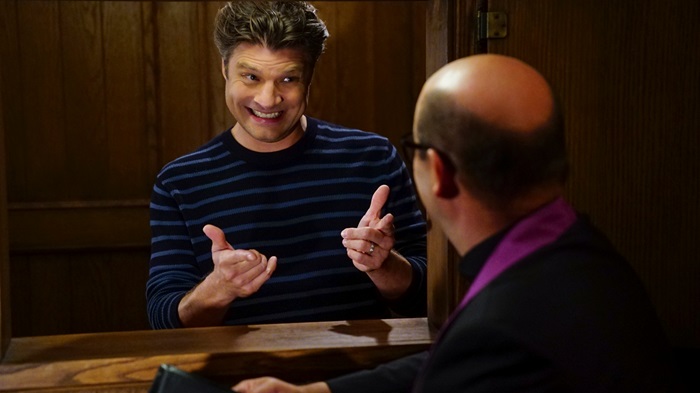 I’m not sure who Living Biblically is for. It’s an intriguing enough premise. Based on the actual book “The Year of Living Biblically” by A.J. Jacobs, in which he chronicled a year of trying to strictly adhere to every code in the Bible, the show focuses on Chip (Jay R. Ferguson) trying to do the same. Chip is a film critic who’s best friend just died and who just gets news from his wife Leslie that he will soon be a father. These two events compell him to reconsider his lapsed faith and go full on religious nut. It’s an interesting set-up, I’ll give it that.

But being a CBS sitcom, the show most likely does not want to offend anyone, especially the most religious viewers. At the same time, the premise is going to inherently call out the absurdity of some of the most trivial Bible commandments (beyond, you know, the Ten Commandments) such as the rule against mixing fabrics, which is highlighted in this pilot episode. It seems like if they are going to play it safe they won’t really be doing the premise justice, and if they are going to push some boundaries they are going to alienate a major part of their audience. Sadly, as is it seems destined to be a miss with viewers.

I try not to judge series without having watched at least three or four episodes. Pilots are notoriously difficult. You have to let the writers, actors, and producers find their groove before you can truly write something off or swear by it. This episode is no exception. It’s a lot of set-up and explaining, and not a lot happens. As Chip is himself coming to the realization he is going to change his life for the next nine months (while he waits for his baby to be born) we also have to meet all the people in his life. The entire cast is likable enough and each brought me a chuckle at one point or another. Father Gene (Ian Gomez) is Chip’s new spiritual mentor. Tony Rock plays the obligatory black friend Vince, a coworker of Chip’s. David Krumholtz is the wise-cracking Rabbi Ableman who joins Father Gene in becoming part of Chip’s “God Squad.” And Camryn Manheim plays Chip’s boss at the paper, Ms. Meadows, who is constantly on people’s cases and who just wants to sell more newspapers! 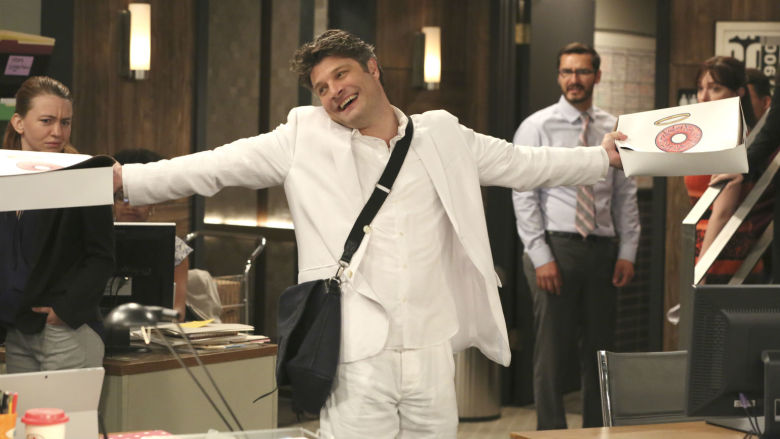 All that said, I found myself enjoying what the show does have to offer, cheesy laugh track aside. I’m a fan of Jay R. Ferguson from his Mad Men days and I find him charming; he reminds me of a Nathan Fillian. I also review the abysmal freshman CBS sitcom 9JKL and I will say that Living Biblically is leaps and bounds funnier and more original than that show. After realizing an office mate of his is carrying on an affair, Chip decides with some trepidation that, per the Bible, he must stone this adulterer. In one of the episode’s funnier moments he tosses a rock at his coworker’s forehead when he sees him out with a woman who is not his wife at a restaurant. He darts out.

The next day the coworker, instead of confronting Chip, praises him for helping him see what an awful person he was being. He ended his affair and is going to counceling with his wife. On top of that Ms. Meadows heard about Chip’s little Bible experiment and wants to pay him more money to write three more articles a week about his experience. Vince points out that he might just have to try this living biblically thing his self! And that was a little disappointing; I think this show has potential, but not if it turns out to be a corny advertisement for adhering blindly and strictly to the “word of God.” It can be so much more than that, and I hope it takes a step in the right direction with its next episode.